Increased limitcalled unrealistic by Compiled Democrat-Gazette Staff From Wire Reports | May 17, 2021 at 4:39 a.m. 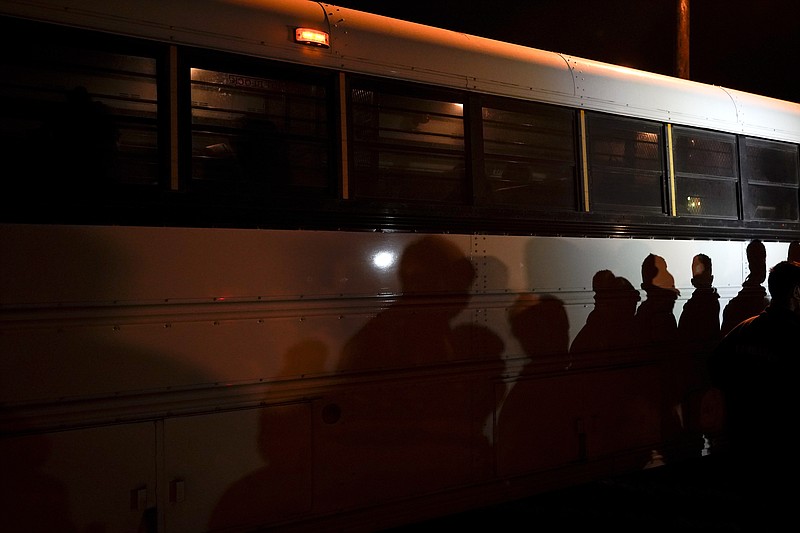 FILE - In this May 11, 2021, file photo shadows of migrants lined up at an intake area are cast along the side of a bus after turning themselves in upon crossing the U.S.-Mexico border in Roma, Texas. President Joe Biden, under political pressure, agreed to admit four times as many refugees this budget year as his predecessor did, but resettlement agencies concede the number actually allowed into the U.S. will be closer to the record-low cap of 15,000 set by former President Donald Trump. (AP Photo/Gregory Bull, File)

SAN DIEGO -- President Joe Biden, under political pressure, agreed to admit four times as many refugees this budget year as his predecessor did, but resettlement agencies concede the number actually allowed into the U.S. will be closer to the record-low cap of 15,000 set by former President Donald Trump.

Refugee advocates say they are grateful for the increase because it's symbolically important to show the world the United States is back as a humanitarian leader at a time when the number of refugees worldwide is the highest since World War II. But they're frustrated, too, because they say more refugees could have been admitted if Biden had acted quicker.

Biden first proposed raising the cap to 62,500 in February in a plan submitted to Congress but then refused to sign off on it for two months before coming back April 16 and suggesting he was sticking with Trump's target.

Democratic allies and refugee advocates lambasted him, saying he was reneging on his campaign promise in the face of bipartisan criticism over his handling of an increase in unaccompanied migrant children at the U.S.-Mexico border.

"To be clear: The asylum process at the southern border and the refugee process are completely separate immigration systems. Conflating the two constitutes caving to the politics of fear," said Democratic Sen. Richard Blumenthal of Connecticut, a member of the Senate Judiciary Committee.

Weeks later, on May 3, Biden raised the cap.

So far this year only about 2,500 refugees have arrived, with less than five months left before the fiscal year ends on Sept. 30.

More than 35,000 refugees have been vetted and approved to come to the United States, but thousands were disqualified under the narrow eligibility criteria Trump established in October when he set the low cap. By the time Biden expanded the eligibility, many health screenings and documents were no longer valid, according to resettlement agencies. Even under the best circumstances, it can take two months for each case to be updated.

Before the Trump administration's drastic cuts, the United States had admitted more refugees each year than all other countries combined under a program now 41 years old.

With a family history that includes two step-parents who fled Europe during and after World War II, Secretary of State Antony Blinken pushed to restore that leadership by significantly boosting the cap in the early days of the administration. The State Department recommended to the White House the ceiling be set at 62,500, officials said.

But a senior official familiar with Blinken's thinking said it quickly became clear that the State Department offices responsible for refugee resettlement had been so gutted that they wouldn't be able to process and absorb that number of refugees.

The official, who spoke on condition of anonymity because he was not authorized to speak publicly about the matter, described the situation as "aspiration meeting reality" and said Blinken reluctantly concluded that 62,500 wouldn't be possible in the short term.

The Office of Refugee Resettlement also has been taxed by the jump in unaccompanied migrant children coming to the U.S. border, according to the administration. Some $85 million was diverted from refugee resettlement money to help care for the children, government documents published by The New York Times show.

Biden did not want to promise something he wasn't sure was possible, Blinken said.

The Trump administration had cut U.S. staff overseas who interview refugees by 117 officers. As a result, the number of interviews that were conducted fell by one-third in 2019 compared with those done in 2016 under the Obama administration. That number fell off almost entirely in 2020 because of the coronavirus pandemic.

Because of travel restrictions in and out of refugee processing sites worldwide, the U.S. suspended refugee arrivals from March 19 to July 29 of last year except for emergency cases. Only 11,800 refugees were admitted in the 2020 fiscal year, the lowest number in the history of the program.

The administration is working on rehiring that staff and addressing the backlog, including by making it possible to conduct interviews by video teleconferencing instead of doing them in person, deputy State Department spokeswoman Jalina Porter said.

Biden has pledged money to expand the operations of resettlement agencies, which are paid by the federal government per refugee served. With the refugee numbers way down, the agencies were forced to close about 100 offices nationwide during the Trump administration.

Some agencies so far have only been able to cobble together a few dozen qualified people after losing their experienced staff.

The "sad truth" Biden warned when he finally set the target at 62,500 is that goal won't be achieved.

Instead, the administration and advocates are working to fix the program by 2022 when Biden has promised to raise the ceiling to 125,000.

Complicating the U.S. refugee situation is the swelling numbers of migrants along the southwestern border. In April alone, 178,622 people were encountered by the Border Patrol, the highest number in 20 years.

Most of them are from Central America, fleeing gang violence and natural disasters, but the past few months have also brought a much different wave of migration that the Biden administration was not prepared to address: pandemic refugees.

According to official data released last week, 30% of all families encountered along the border in April hailed from countries other than Mexico and the Central American countries of Guatemala, Honduras and El Salvador, compared with just 7.5% in April 2019, during the last border surge.

At the U.S.-Mexico border in recent months, agents have stopped people from more than 160 countries. Many of them are entering the United States through wide openings in the border wall near Yuma, Ariz., sparing them from risky routes.

During a single weekend in early May, agents in the Yuma area intercepted 1,600 migrants. Border Patrol agents working in the Yuma sector said the number of migrants arriving there now dwarfs the surge of Central Americans two years ago that prompted some of the harsh immigration measures imposed by Trump. They said they were struck by how far people had traveled.

A huge tent has gone up in the parking lot behind the Border Patrol's headquarters in Yuma to accommodate migrants taken into custody, who must be interviewed and undergo background checks.

Some are transferred to Immigration and Customs Enforcement detention. But most are simply being released to nonprofit aid centers, where they spend a day or two before traveling to join friends and relatives elsewhere in the United States.

Measures imposed under the Obama administration, such as fitting migrants with ankle monitors to ensure that they attend court hearings later, are only sparingly used.

On one recent morning in the Yuma area, two families from India made their way across the border, the men with their arms raised, their wives and children following behind. One family said it hoped to reach Georgia; the other was Florida-bound.

They had flown through five countries to reach Mexico City, where they had boarded a bus to the U.S.-Mexico border. A cabdriver connected to coyotes had deposited them on a road from which they walked to a gap in the wall.

Close behind them came a Cuban man headed for Miami.

A few minutes later, a little girl with a Mickey Mouse sweater dangling from her waist came through with three adults, headed for Boston, where friends and jobs awaited.

Then came the Gomez family, the ones who had come from Venezuela, dragging wheeled baggage. Gomez's wife, Natasha, held her three grandchildren and wept. "In Venezuela, there is no food, no electricity, no medicine, no work," she said.

U.S. asylum law grants protection to those suffering persecution on account of their race, religion, nationality, political opinion or membership in a particular social group.

While most of the migrants do not necessarily understand the intricacies of U.S. border policy, many said in interviews that they perceived a limited-time offer to enter the United States. Friends and family members already in the country, along with smugglers eager to cash in, have assured them that they will not be turned away.

"What we're hearing back home is that the new president is facilitating entry, and there is demand for labor," said Rodrigo Neto, who came from Brazil, where the pandemic killed his business and left him overwhelmed by debt. "I couldn't pass up this opportunity."

The U.S. government attempts to swiftly send back migrants caught illegally crossing the border under an emergency pandemic health order known as Title 42, but Mexico has refused to accept many migrants from South America, Asia and the Caribbean. In many cases, those migrants have been released in the United States with a notice to appear later in an immigration court.

Information for this article was contributed by Julie Watson and Matthew Lee of The Associated Press; and by Miriam Jordan of The New York Times. 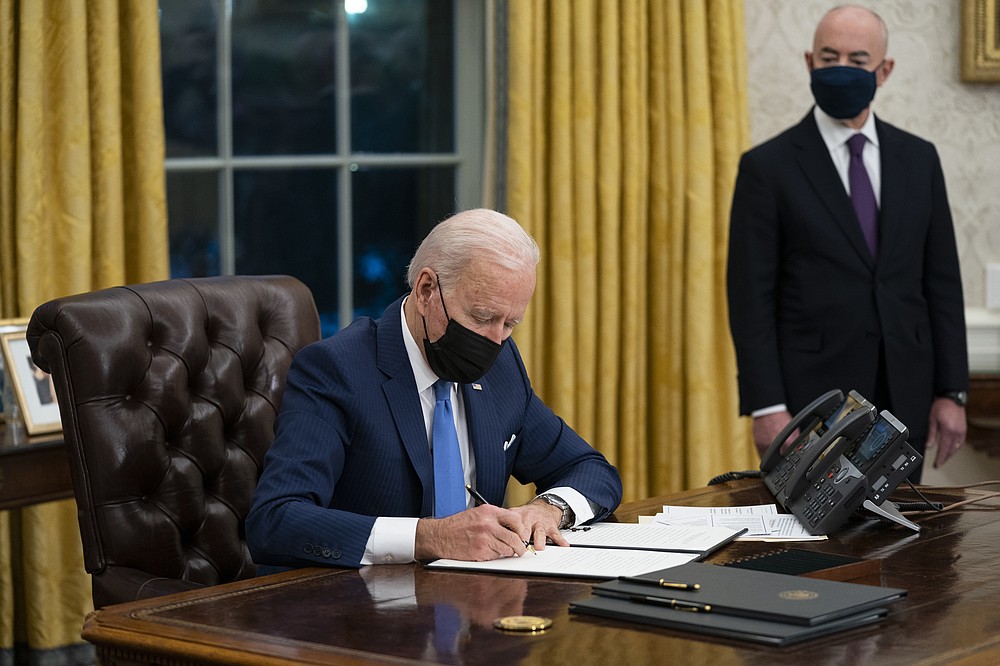 FILE - In this Tuesday, Feb. 2, 2021, file photo, Secretary of Homeland Security Alejandro Mayorkas looks on as President Joe Biden signs an executive order on immigration, in the Oval Office of the White House in Washington. Biden, under political pressure, agreed to admit four times as many refugees this budget year as his predecessor did, but resettlement agencies concede the number actually allowed into the U.S. will be closer to the record-low cap of 15,000 set by former President Donald Trump. (AP Photo/Evan Vucci, File) 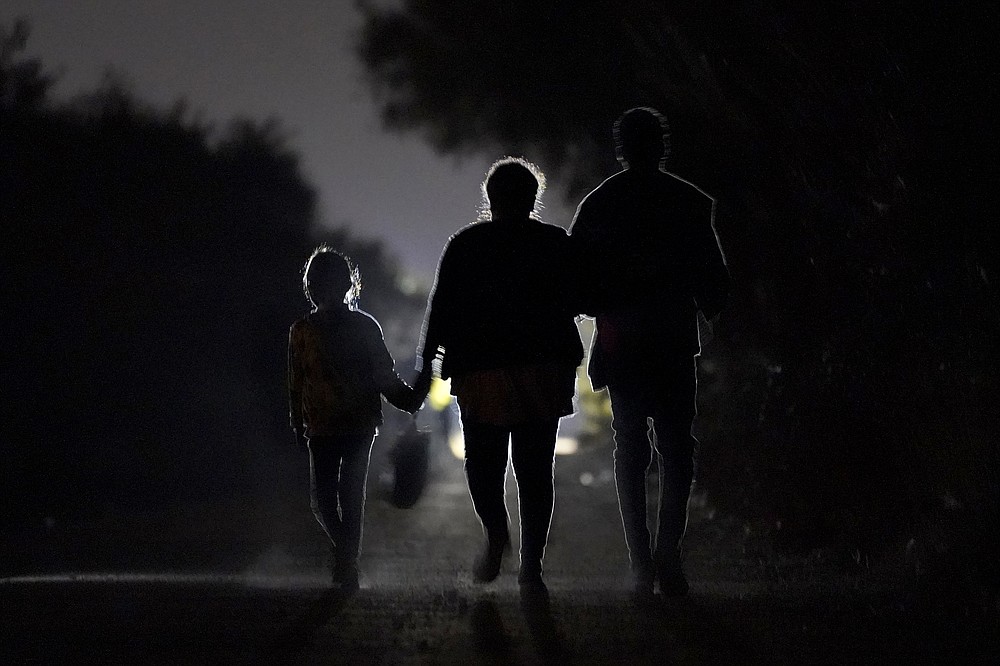 FILE - In this March 21, 2021, file photo a 7-year-old migrant girl from Honduras, left, walks with Fernanda Solis, 25, center, also of Honduras, and an unidentified man as they approach a U.S. Customs and Border Protection processing center to turn themselves in while seeking asylum moments after crossing the U.S.-Mexico border in Mission, Texas. The girl's journey illustrates the extraordinary risks taken by parents to get their children across the border, even if it means abandoning them for the most perilous part of the trip. She is one of thousands of kids arriving alone in the U.S. in a surge that is straining the federal government's system for managing refugees. (AP Photo/Julio Cortez)
ADVERTISEMENT