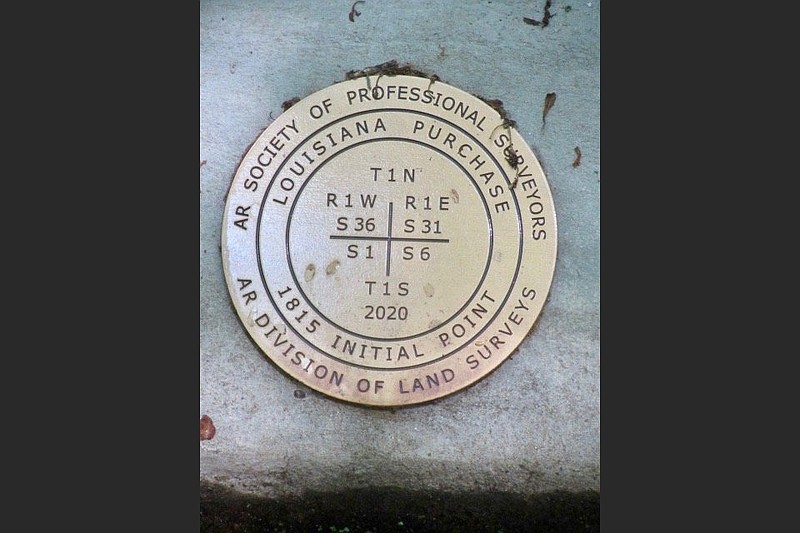 This survey medallion is newly placed at Louisiana Purchase State Park. (Special to the Democrat-Gazette/Marcia Schnedler)

LOUISIANA PURCHASE STATE PARK — One of Arkansas' most secluded state parks, marking a location that played a key role in mapping America's westward expansion, is newly improved to provide a sharper sense of the site's importance.

Louisiana Purchase State Park is tucked at the dead end of Arkansas 362, where Lee, Monroe and Phillips counties meet. Access to the 38-acre park, which reopened in April, is via a 950-foot stroll along a zigzagging boardwalk.

"This is an important piece of history for mapping out much of the United States west of the Mississippi," says Molly Elders, the park's superintendent. "It's also rich in natural history, as a rare surviving example of a headwater swamp."

At the pathway's end, a major improvement by the Arkansas Department of Parks, Heritage & Tourism is the elevation of the granite monument that was installed by the Daughters of the American Revolution in 1926. The property, 90 miles east of Little Rock, became a state park 35 years later.

The heavy monument was sinking slowly below the water line, sometimes obscuring part of the inscription. Now visible year-round, the engraving reads: "This stone marks the base established Nov. 10, 1815, from which the lands of the Louisiana Purchase were surveyed by United States engineers. The first survey from this point was made to satisfy the claims of soldiers of the War of 1812."

Elders explains that "it was quite a task to raise that monument. We had to build a temporary wooden bridge from our parking lot to get a crane out there. It took days and days to do the work." 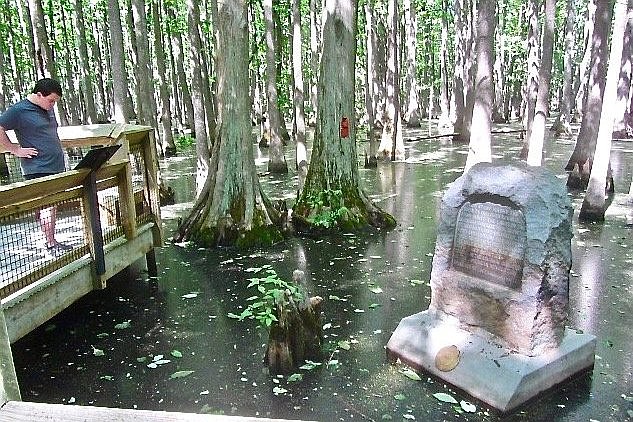 Improvements also include replacement of the dozen illustrated signs posted along the boardwalk, some dealing with the site's history and some with the natural setting. The walkway itself has been strengthened.

The swamp setting with its dense growth of tall, slender trees offers a vivid example of the primordial landscapes that confronted explorers and other pioneers two centuries ago in what today is the Arkansas Delta.

Surveyors came here 12 years after President Thomas Jefferson had bought the so-called Louisiana Territory from Napoleon Bonaparte, first consul of France, to nearly double the size of the United States. The purchase's cost — $15 million — amounted to about $19 per square mile.

When the survey began, Arkansas was still four years away from becoming a U.S. territory and 21 years from statehood. The main purpose of the project was to facilitate the mapping of land claims by veterans of the War of 1812.

To reach the site of today's park, surveyor Prospect K. Robbins traveled mainly by boat north from the mouth of the Arkansas River. Fellow surveyor Joseph C. Brown proceeded west from the mouth of the St. Francis River to meet him. They blazed two trees with an axe to mark their north-south and east-west crossing point. The junction became ground zero for platting what would become all or part of 13 states.

"Only after this point was established and surveys conducted outward from this point," explains one park sign, "could land grants be issued; settlers, prospectors and ranchers stake a claim, or towns be platted." 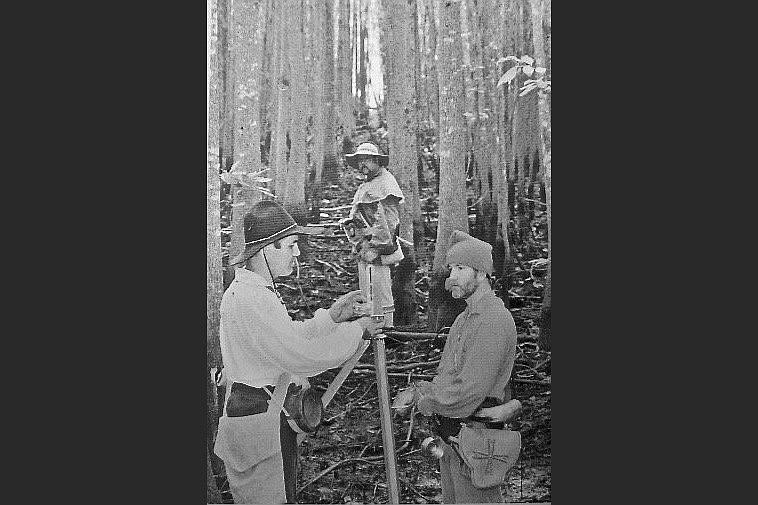 Re-enactment of the 1815 Louisiana Purchase survey is pictured on the boardwalk. (Special to the Democrat-Gazette/Marcia Schnedler)

As important as it had been, the initial point was soon lost to memory until 1912. Then two public surveyors came across the trees that had been marked by Robbins and Brown after their rendezvous.

Most distinctive about the park's natural setting is that it preserves one of the state's few remaining headwater swamps, which were common in the Arkansas Delta before the advent of wholesale drainage and clearing for agriculture. Headwater swamps seldom see deep flooding. But they rarely dry up, in contrast to the more familiar backwater swamps that come and go in flood plains.

Along the boardwalk, one interpretive sign urges visitors to "take a moment to look at the unusual plants and listen to the sound of life in the swamp."

Plant life along the way includes a forest of slender water-tupelo and bald-cypress trees, as well as swamp cottonwoods and swamp chestnut oaks. Another sign notes that eastern Arkansas wetlands like this one still shelter raccoons, beavers, minks, swamp rabbits, opossums, gray squirrels and deer.

One possible sound is a sharp, birdlike whistle from above — not made by any flying species but rather by male bird-voiced tree frogs, a threatened species less than 2 inches long. They can change color from gray to green depending on temperature, moisture and background.

The females of these frogs lay as many as 500 eggs, which float in packets in the swamp water — much as when Robbins and Brown met here two centuries ago.

CORRECTION: Napoleon Bonaparte was first consul of France when the Louisiana Purchase treaty with the United States was signed in 1803. An earlier version of this story misstated his title at that point in history.