Lure for all seasons: Supple plastic worms versatile, easy to use 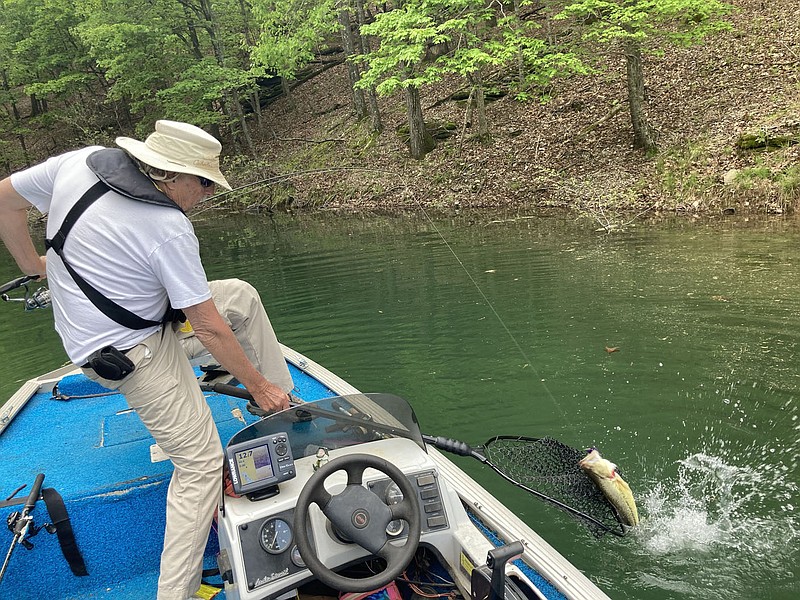 Dwayne Culmer nets a largemouth bass he caught May 3 2021 with a plastic worm at Beaver Lake. Plastic worms in dark colors are his go-to lures for bass during spring and summer. (NWA Democrat-Gazette/Flip Putthoff)

When it comes to catching black bass, most anglers would rather fool 'em with plastic worms than feed 'em the real thing.

Fishermen resurrect supple, soft plastic worms from their tackle boxes as waters warm during spring. They're easy to use. Bump, hop or drag them along the bottom, or use a floating worm for surface fishing around flooded bushes and timber. Plastic worms come in every color and size under the sun.

[Video not showing up above? Click here to watch » https://www.youtube.com/watch?v=ql7_5ebVYRw]

For Beaver Lake bass ace Dwayne Culmer, they're about the only lure he uses all year. He casts them during spring in cool water and in August when the water is bathtub hot. As the water temperature in late fall plunges into the high 40s, a plastic worm is tied to his fishing line.

At 73, Culmer has decades of experience using plastic worms from California to Arkansas. Another bass fanatic, Reese Jones of Rogers, is 21, but far from a newbie. He's been fishing since he was able to cast a line as a toddler.

That's two generations of anglers, but both offer much the same advice about bass fishing with plastic worms.

Culmer seeks out steep ledge-type banks that stair-step down into deep water. "I like to bump it along the bottom, hopping it a little as it sinks down," he said.

Jones likes those same type of stair-step shorelines. He does most of his fishing in the Prairie Creek area of Beaver Lake while Culmer prowls the Rocky Branch area where he lives. It's east of Prairie Creek several miles down the lake.

There may be as many ways to rig a plastic worm on a hook as there are species of fish in the lake. Rigging a worm shaky-head style is popular on all Ozark lakes. It's the setup Culmer and Jones both prefer.

A plastic worm rigged shaky-head is basically just a plastic worm threaded onto a jig head. Anglers usually turn the hook so the point can be partially buried into the body of the worm to make it weedless. That helps prevent snags, but still hooks biting bass.

Fishing a shaky-head worm calls for doing just that -- shaking the rod tip to give the plastic worm action. Culmer is a shaker, all right. Jones prefers a subtle approach.

"I just drag it. I fish it real slow," Jones said. "I think if you're shaking the worm, you're fishing it too fast."

Shaky-head fishing really took off at Beaver Lake in 2006 after Shinichi Fukae, an angler from Japan, won a Walmart FLW Tour bass tournament at Beaver. He fished a shaky-head worm on the north end of the lake for the win and first prize of $200,000.

Purple has been the hot shaky-head color for Culmer this spring. During a morning of fishing May 3, Culmer welcomed a mix of 20 spotted bass and largemouth bass into his boat, all caught on a six-inch purple plastic worm rigged shaky-head style.

Each fish bit on stair-step ledge banks in the Van Winkle Hollow arm of Beaver Lake, east of Rocky Branch park. Bites came between two and 10 feet deep. Culmer and his fishing buddy released most of the fish, but kept six spotted bass to eat.

Jones prefers green pumpkin and watermelon colors with some metal flakes mixed into the color scheme. Colors that imitate crawdads are good to use. Small crawdads are the candy of crustaceans to black bass.

Plastic worms get all three species of black bass -- largemouth, smallmouth and spotted bass -- to bite at Beaver and nearby reservoirs. They work wonders on Ozark streams as well.

Black bass are shallow during spring, two to 10 feet as Culmer proved. They'll move deeper as the water warms, down to 20 feet by summer. Fishing will be tougher then, but plastic worms will be the way to catch them. 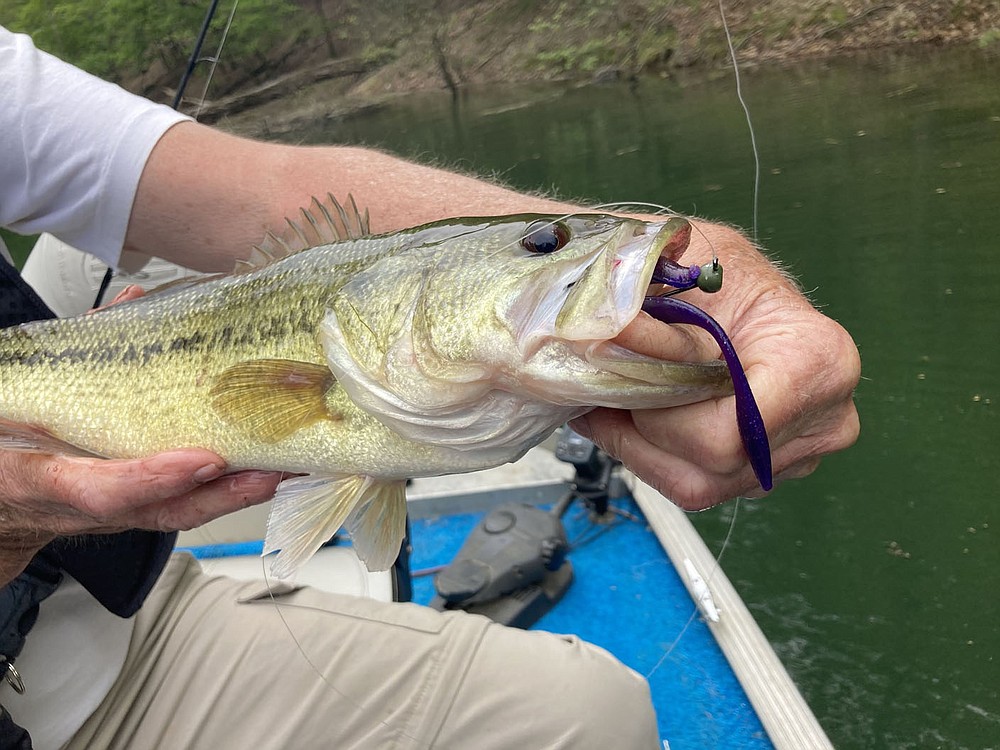 Purple proved to be a hot color for Culmer on May 3 2021 at Beaver Lake. He caught several bass, such as this largemouth bass, in the Rocky Branch area. (NWA Democrat-Gazette/Flip Putthoff) 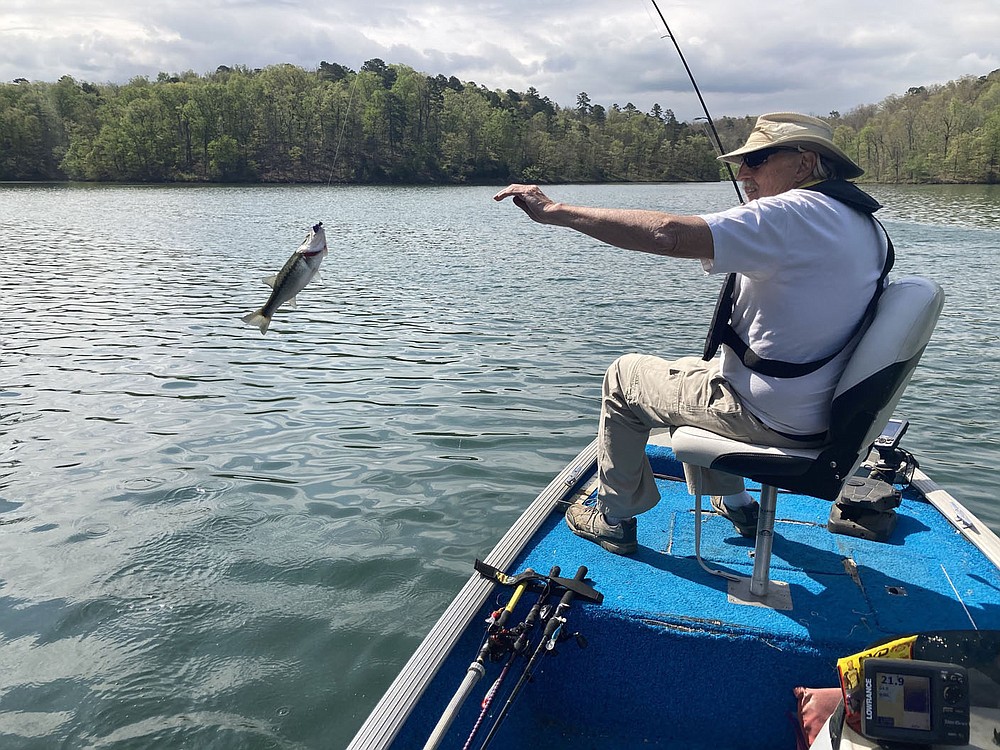 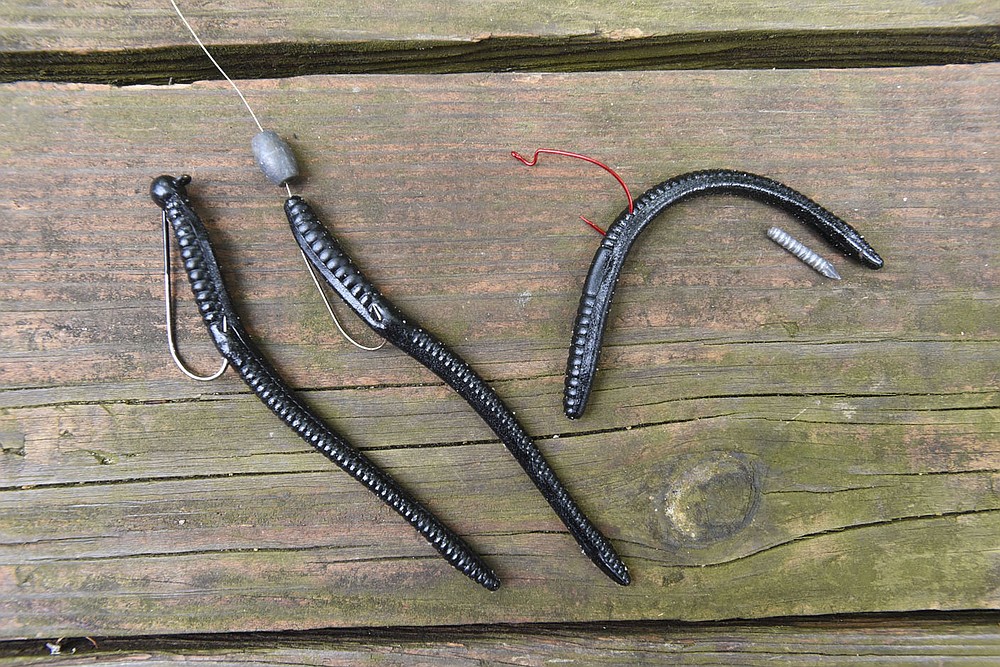 Three easy ways to rig plastic worms are shaky-head (from left), Texas rig and wacky style. Shaky-head is basically a plastic worm threaded on a jig head. Texas rig uses a slip sinker that slides freely up and down the fishing line. Wacky has the hook threaded through the middle of the plastic worm. A finishing nail, or wacky worm weight, is inserted into the head or tail of the worm. (NWA Democrat-Gazette/Flip Putthoff)
More News

Get bass to bite

Plastic worms are a good choice for catching the three species of black bass — largemouth, smallmouth and spotted. The daily limit is six black bass at Beaver Lake. Largemouth bass and smallmouth bass must be 15 inches or longer to keep at Beaver. Spotted bass of any size may be kept.

The plastic worm was invented in Ohio by Nick Creme in 1949. Legend has it that Creme got tired of digging up real worms and nightcrawlers and came up with the plastic variety. Creme went on to found Creme Lure Co.