Turtle rehab is best left to the experts 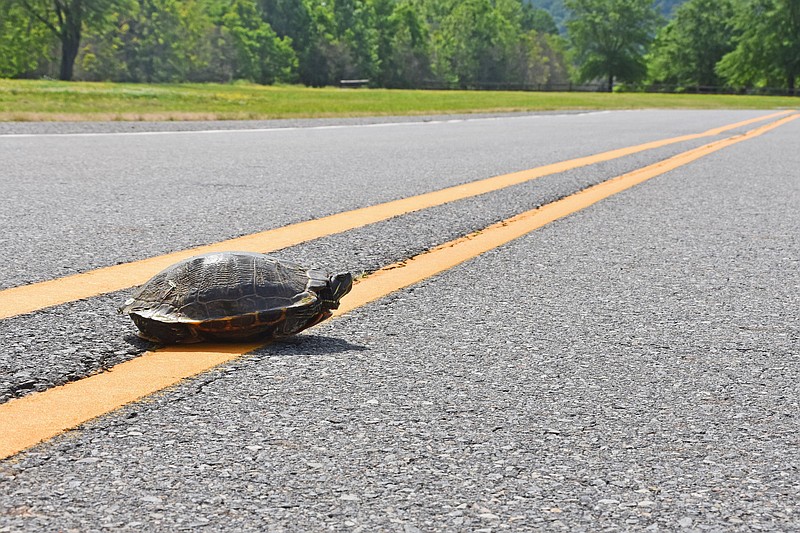 If you see a turtle crossing the road, stop and help it to the other side if it is safe to do so. It is not advised to take the turtle with you or move it back to where it came from. Box turtles are increasingly rarer sights because of human activity. (Arkansas Democrat-Gazette/Staci Vandagriff)

Turtles have protective shells, but they aren't invincible. They are commonly injured by lawn mowers, cars, pets, propellers and gunshots, and sometimes they just get sick.

They are resilient, though, and even if a turtle's carapace, or shell, is cracked, it can still recover.

The Game and Fish Commission has a list of a handful of wildlife rehabilitators around the state who specialize in turtles posted on its website: Wildlife Rehabilitation (agfc.com). A call to one of them can be the first step in finding out how to help an injured turtle.

Anna Heckmann of Fayetteville created the nonprofit Turtle Shire Rehabilitation Center about a year ago, filling a void that would have been left when another rehabilitator moved away. Wildlife rehabilitators are permitted by the Arkansas Game and Fish Commission; they are required to find a licensed rehabilitator to supervise a two-year apprenticeship, which is the stage Heckmann is finishing now.

When Heckmann gets a call about an injured turtle, she evaluates the situation to decide whether the turtle needs to come to her center for antibiotics and pain relief. She works closely with a veterinarian, who can take X-rays when necessary for diagnostics.

"He did amputate a prolapsed uterus in a turtle," says Heckmann, an adjunct professor of biology at Northwest Arkansas Community College.

Heckmann's goal is to help sick and injured turtles get better so they can be released, which can be tricky because turtles typically live their lives within one square mile.

"But when a turtle is injured it's usually because they're in a high traffic area or somewhere that poses a risk to them, so they have a better chance of survival if they can be released somewhere they can find a mate and reproduce and control the insect population and spread seeds and do everything they do for the environment," she says.

Dr. Beth Milligan of Little Rock has been a permitted wildlife rehabilitator for Game and Fish for about a year, though she has been doing what she can to help turtles for much longer.

She fields calls from people all over the state who have found injured turtles. She often drives many miles to get to those turtles, but her schedule as a human doctor doesn't always allow for her to travel immediately. Sometimes she offers advice to callers about how to hydrate turtles, where to put them so they can heal and, if necessary, how to bandage their wounds.

"If the shell is so broken that a lot of their muscular area is exposed, it's going to require me getting involved," she says.

She sometimes has to say no to a rescue attempt, knowing that even with her medical skillset there is nothing she can do to help.

Unlike Heckmann, she does not have a nonprofit organization, and thus she cannot take donations.

"There's no funding from Game and Fish that I'm aware of for doing this," she says. "All of us rehabbers do this out of our own pockets."

"They get hit occasionally but usually that's because someone was doing that on purpose," she laments.

This year, the bulk of calls Milligan has received have been from people seeking to rehome turtles they have bought or captured and kept as pets. Pet turtles are lifelong commitments, she reminds them, because many live 50 years or more, there are few people or organizations willing or able to take them and Game and Fish Commission regulations prohibit them from being released in the wild.

That's an important consideration for people who find injured turtles and their first inclination is to take the turtle home and try to nurse it back to health. It's better to leave it be or to contact a wildlife rehabilitator, Milligan says.

"There's not a lot I can do for those people," she says. "It's a bad idea to take a turtle home."