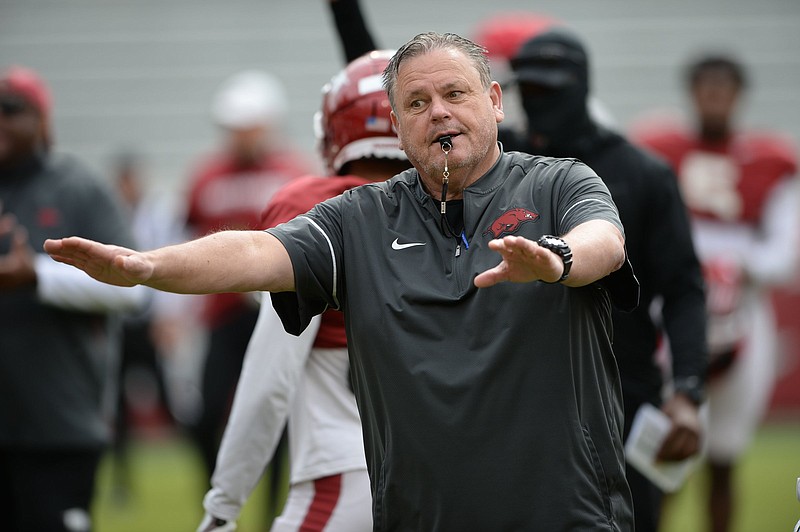 HARRISON -- University of Arkansas Athletic Director Hunter Yurachek said he and football Coach Sam Pittman agreed to a reset of Pittman's contract last week, which will essentially roll over the five-year agreement he signed upon his hiring in December 2019.

Pittman's salary is $3 million per year. The new deal will take him through the 2025 season.

Speaking to the media before his address to a crowd of about 250 fans at the first One Razorback Roadshow of the month at the Durand Center in Harrison, Yurachek confirmed the new deal.

"What I did for Coach is we just did a total reset of his contract," Yurachek said. "So he's kind of starting from Year 1 again this year. So in a sense it's given him a one-year extension.

"But I didn't feel like for Coach that to be evaluated on his first season without spring practice, playing an SEC-only schedule was the appropriate measure for him. So him and I agreed, let's just reset your contract, really to kind of like this is your first year coming up this year. He and I both executed that this past week."

The Razorbacks went 3-7 against an all-SEC schedule in Pittman's major college head coaching debut last season. Arkansas snapped a 20-game SEC losing streak with a 21-14 upset of No. 16 Mississippi State in Week 2. The Hogs then broke a 12-game home losing streak in conference play with a 33-21 win over Ole Miss in Week 4 that featured six interceptions and seven takeaways.

Pittman and his coaching staff will still receive their bowl bonuses, even though covid-19 issues within the TCU program forced a cancellation of the Texas Bowl. However, that payment has been deferred to June 1.

Pittman, also at the One Razorback event, said he was happy with the renewal.

"I thought it was certainly fair and gave me another year on my contract," Pittman said. "I've said it before. Longevity is important to me. I guess we did enough where Hunter felt we were going in the right direction, and I was excited about it."

Yurachek is also in line for a raise and extension based on talks with Chancellor Joe Steinmetz.

"I'm not worried about that," Yurachek said. "The chancellor and I have had some very preliminary discussions on that. He's made it known to me that he wants me to be around for the foreseeable future. I want to be here.

"My family loves it here. Not only do we have a house here, we have a cabin up on Beaver Lake that's just a special place for me and my family. There's not another place that I want to be. I'm more worried about taking care of Sam and all of our other coaches, and I'll get taken care of in due time."

Yurachek said the department's coaching staff had their pay reinstituted to 100% on April 1 after staff members took varying percentages of cuts due to the coronavirus.

Yurachek added the vaccination rate for UA student-athletes is somewhere between 65-70% total and higher for spring sports. The baseball team has surpassed the 85% vaccination rate, Yurachek said, triggering a waiver from wearing masks in the dugout, per the SEC Medical Task Force guidelines.

Capacity will be increased to 100% at Baum-Walker Stadium for this weekend's final regular-season series against Florida, and Yurachek would like to see the NCAA ease off its 50% capacity mandate for upcoming baseball regionals and super regionals.

"There's always a chance, but really they're getting down to the end of their championship season," Yurachek said. "Softball starts this weekend and there's not going to be a change for softball. So I don't foresee the last championship event for the spring, which will be baseball, them changing how they do things for that last championship.

"But I put a call in every week and keep pressing, as do my colleagues, because it really impacts those of us across the Southeastern Conference for sure, those of us who are going to be hosting softball regionals and hopefully super regionals and the same in baseball."

Speaking to the rowdy crowd at the Durand Center, Yurachek touted the Razorbacks' national championship in women's indoor track, and the school's eight SEC championships during the 2020-21 academic year.

"You know who the next highest is? Alabama with four," Yurachek said. "Florida has three. There have been six schools who have not won a championship."

Speaking earlier to the media, Yurachek called this "a special year, for sure, to win eight conference championships to date and baseball is in line if they're able to take care of business this weekend, to win the ninth.

"It's just a testament to our coaches and our student-athletes and how they've handled this very challenging year. We put a plan together for them back in May to take care of themselves and started implementing that in June when they came back and they've just done a phenomenal job."

Pittman left the crowd laughing with his down-home humor.

Pittman said he told himself as he took the Arkansas head coaching job "I'm not going to be a 'cliche' coach.'"

Then, he said, 'Yesssir!' and "Turn that damn juke box on!" just grew lives of their own. So he gave a little back story to the origination of the juke box line.

"We beat Mississippi State," Pittman said. "The kids don't know how to act. What do we do? We jump around and have some fun. We go into the locker room. I haven't talked to the media yet.

"There was a little boom box in the room. I just said, 'Turn that juke box on.' Next thing I know it's on T-shirts and it's everywhere. And I'm not a cliche coach."

Pittman also told the crowd that the Razorbacks are full on scholarships for the 2021 season, and he and the coaching staff are recruiting hard for the 2022 class, which is currently ranked No. 12 in the country. That ranking is by 247Sports.com.

Yurachek said the Razorbacks have sold 30,000 football season tickets and are about to start another push for new season-ticket sales soon.

Yurachek told the crowd that the department was down $35 million in revenue in the current fiscal year, but that things were looking up for the upcoming fiscal year, which starts July 1.