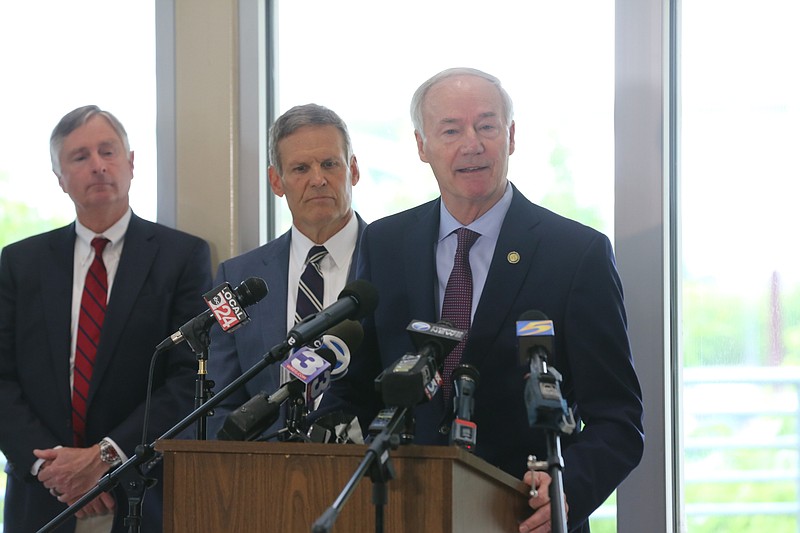 In a day of news conferences and legislative briefings Tuesday in states on either end of a damaged and idle Mississippi River bridge, the key question remained: How long will it be before traffic flows again?

And the answer remained: Nobody knows yet.

Even a news release Tuesday evening by the Tennessee Department of Transportation to announce that a time line to fix the Interstate 40 Hernando de Soto Bridge at Memphis has been established didn't include a concrete length of time for the work to be done.

"We really don't know," Clay Bright, the top executive at the Tennessee Department of Transportation, told reporters during a news conference in Memphis. "It could be several months easily. We just don't know."

The news conference came a week after an inspection of the nearly 50-year-old crossing uncovered a fracture in a 900-foot-long steel beam on one of the spans, triggering an emergency closure of the bridge, which is part of a major freight corridor through the center of the United States.

Before the break was discovered, more than 40,000 vehicles crossed the bridge daily. About a third of them were trucks. Now, some are trying to squeeze on the other bridge connecting Arkansas and Tennessee at Memphis, the Interstate 55 bridge.

[Video not showing up above? Click here to watch » https://www.youtube.com/watch?v=zcBjdQTq6lE]

Long-haul trucks face long delays crossing the river using the I-55 bridge. Others are taking long detours, such as the U.S. 49 bridge at Helena-West Helena, which has seen increased truck traffic since the I-40 bridge closed. Both options eat up time and fuel.

The Arkansas Trucking Association said the bridge closing is costing the industry $2.4 million per day. A two-month closure would cost the industry nearly $150 million.

"This is a critical, critical link for Arkansas," Gov. Asa Hutchinson said during a Memphis news conference with Tennessee Gov. Bill Lee. "Whenever you see a break in commerce, whenever you see a break in a bridge, you realize how dependent you are on that flow of commerce. It really impacts the Arkansas side. Arkansans who came over here today know the delay involved."

Efforts to repair the bridge are moving swiftly. Kiewit Corp. of Omaha, Neb., the company hired to make the repairs, may be able to develop a timeline, Bright said.

"We've got them engaged right now," Bright said during the news conference called by the two governors to reassure the public that the bridge will be open as quickly as possible without compromising safety. "They're working through the details for Phase 1 and Phase 2 [of the repairs]. ... For me to just speculate, several months is about all I can tell you right now. But we want to let the public know when we have better information that we can live by."

The department's evening news release said Kiewit was committed to working 24 hours per day until repairs are completed, and it plans to have work platforms in place this week.

The first of two phases to make the repairs involves taking several tons of newly fabricated metal plates -- two weighing 18,000 pounds each, according to the latest plans -- and using them to brace the damaged beam to safely allow personnel from Kiewit to get on the bridge to begin the repairs, perhaps as soon as this week.

Bright said the second phase involves cutting out and replacing the damaged beam, as well as inspecting the bridge to determine whether any additional issues need to be addressed before traffic can resume using the bridge.

"They were on our four o'clock call yesterday, on our design call," Bright said of Kiewit representatives. "They've had some input on those plates. It would make it easier to put that plate in and quicker for them to put the plate in.

"That's what we're tweaking today on the shop drawings is the input from Kiewit. I look forward to them working on this job and getting this bridge back open sooner."

Hutchinson, Lee and their staff members conferred privately before pledging their states' commitment to safely reopen the crossing.

"Our No. 1 priority here is the safety of the people that travel across that bridge," Lee said. "The Tennesseans, the Arkansans, the Americans, the truckers, the commerce, everyone who goes across that bridge is dependent upon us to make certain that it is safe.

"The other priority we have is that commerce move: down the river, up the river and across the bridge."

Hutchinson praised the cooperation at the state, federal and local levels to assure the traveling public that safety is paramount while the bridge is fixed.

The governor also praised the actions of the Arkansas Transportation Department director, Lorie Tudor, who fired a veteran agency bridge inspector Monday after an investigation over the weekend determined that his team didn't correctly examine the 48-year-old bridge in back-to-back annual inspections in September 2019 and September 2020.

It was a Michael Baker International team member who noticed the crack May 11 -- by happenstance, according to Tudor -- and alerted authorities, leading to the bridge closing.

The department confirmed Friday that the fracture in the beam dated to at least May 2019 and wasn't noted on the annual inspection the following September nor the one a year later.

"Director Tudor took quick action," Hutchinson said. "She didn't make any excuses. She's been very transparent in this. I think she handled it perfectly well. She reviewed it over the weekend, determined there was some responsibility and took termination action."

Top officials from the Arkansas Department of Transportation fielded questions from state lawmakers at a subcommittee meeting later Tuesday afternoon in Little Rock.

Tudor's statement to the legislators was nearly identical to what she said at a briefing Monday.

"We should have discovered this fracture in 2019, and we are taking steps and holding people responsible for not doing their jobs accountable, but more importantly, to correct the flaws in our process that allowed it to go unnoticed," she said.

Agency officials do not know what caused the break, said Rex Vines, the department's deputy director and chief engineer.

Asked by state Sen. Trent Garner, R-El Dorado, what department officials meant by negligence, Vines explained that the machinery the inspectors use -- called a snooper -- allows them to drop from the deck of the bridge to the beam and move so they can be within arm's reach of any portion of the bridge they are inspecting.

The terminated employee was not extending beyond the point of the drop-down, so he did not see the crack, according to Vines.

"He was not seeing the entire structure," Vines told legislators.

Garner said he was worried that discovery of the crack would lead to more government spending to repair the bridge when the real issue was the failure to find it.

"I think what we've seen in the conversation since it's been discovered is, this is a funding, infrastructure issue, when it appears to me that it's a failure to actually do the job or find the crack to repair it in a good time," he said. "What I'm nervous about is, the people of Arkansas have given a generous amount of money to ARDOT both through the half-cent sales tax and also through a gasoline diesel tax increase, and the discussion shouldn't be that there wasn't funding to adequately repair this, that it was more of a failure to find it, and that that was the cause of it."

Tudor said it would have cost the same to repair the bridge in 2019 as it would today.

"Nothing would have changed if we'd seen it then," she said.

State Sen. Blake Johnson, R-Corning, chairman of the Arkansas Legislature's Highway Commission Review and Advisory Subcommittee, said the crack wasn't the department's fault but instead was a result of putting off funding for commerce-related needs.

"As a matter of fact, this is not the current director's fault, this is not anybody who's on the commission's fault, this is not anybody in this room's fault; this infrastructure situation is something that, when you kick the can down the road, spend the money on things that don't involve our economy and how we move stuff to market -- and it's time that we do that. And that bridge that everybody's having to go over is older than the director is," Johnson said, referring to the I-55 bridge, which was built in 1949.

Tudor said the agency is conducting an assessment of the state's bridge inspection programs and reexamining all the inspections of fracture-critical bridges that employee performed.

Additionally, the department requested that the Tennessee Department of Transportation perform a drone review of the I-55 bridge to instill confidence in the public, she said.