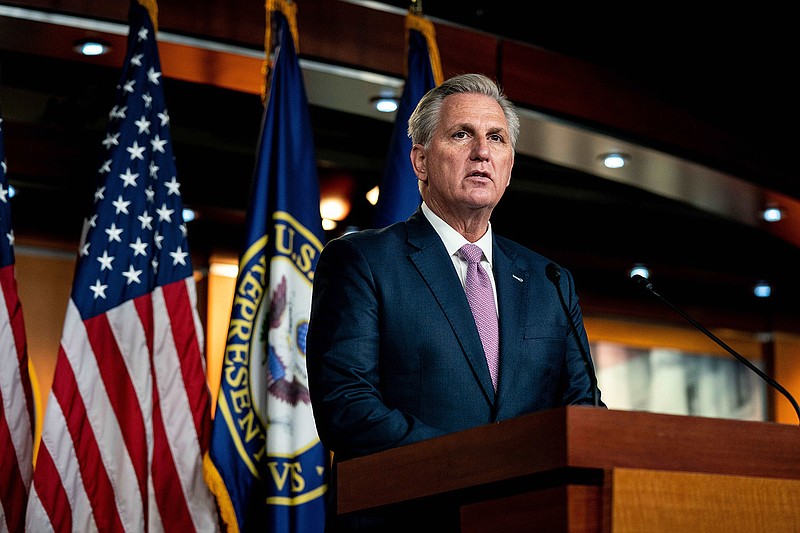 WASHINGTON -- Congressional Republicans are divided over whether to support the creation of an independent commission tasked with investigating the Jan. 6 attack on the U.S. Capitol, threatening the chances of a deeper look at the siege and how it can be prevented from happening again.

House Minority Leader Kevin McCarthy, R-Calif., on Tuesday announced his opposition to a bipartisan deal to establish a panel divided equally between Republican and Democratic appointees, arguing that the commission should be looking into other acts of violence, as well.

He argued that the proposal, which will be voted upon today, is "shortsighted," "duplicative" and "potentially counterproductive," focusing his blame on House Speaker Nancy Pelosi, D-Calif., despite the fact that several Republicans -- including Rep. John Katko, R-N.Y., the top GOP member of the House Homeland Security Committee -- have endorsed the measure.

But in a break between party leaders, Senate Minority Leader Mitch McConnell, R-Ky., said the Senate GOP is "undecided" about whether to back the commission and is "willing to listen" to arguments in favor of the panel.

"We want to read the fine print," McConnell told reporters. "If the majority leader puts it on the floor, we will react accordingly."

Senate Majority Leader Charles Schumer, D-N.Y., said Tuesday that he would bring the legislation up for a vote.

McConnell said the two issues being scrutinized by Senate Republicans are whether the commission risks interfering with law enforcement efforts to identify and prosecute people who took part in the attack, and whether it is set up to allow for a bipartisan investigation, particularly based on how staff members would be chosen.

[Video not showing up above? Click here to watch » https://www.youtube.com/watch?v=XksLQaoUVrU]

He noted that "hundreds of arrests" have already been made in relation to the Jan. 6 assault, in which approximately 10,000 people laid siege to the Capitol and about 800 broke inside, vandalizing the building as they searched for leaders of the U.S. government, including Pelosi and then-Vice President Mike Pence.

But the fact that McConnell left the door open to backing the commission after consulting with his rank-and-file members suggests there may be enough Republican votes to approve the legislation in the Senate.

Several Republicans, including some who voted this year in favor of convicting former President Donald Trump on impeachment charges for inciting the insurrection, indicated this week that they are open to backing a commission. Sen. Mike Rounds, R-S.D., who did not back Trump's impeachment, told NBC News on Tuesday that he was in favor of a commission because "I don't want it to be swept under any rug."

Sen. Mitt Romney, R-Utah, said earlier Tuesday that after the violent attack, "we should understand what mistakes were made and how we could prevent them from happening again."

Sen. Roy Blunt, R-Mo., recommended that his colleagues oppose the commission. Blunt, the top Republican on the Senate Rules Committee, is working on a bipartisan report with his Democratic colleagues that will include some recommendations for security upgrades. He said an independent investigation would take too long and that "frankly, I don't think there are that many gaps to be filled in on what happened on Jan. 6, as it relates to building security."

In the House, the Republican coalition supporting a commission had expanded beyond those who voted for Trump's second impeachment.

"Right now I'd like to vote for it," said Rep. Don Bacon, R-Neb., who opposed impeachment and has become a top target for Democrats trying to flip seats in 2022. "I don't mind having transparency and putting a spotlight on what happened -- I think it's all right."

Pelosi slammed McCarthy's opposition as "cowardice" and released a letter he had sent to her in February showing that Democrats had incorporated all three of his principal demands for a commission modeled after the one that studied the Sept. 11, 2001, terrorist attacks.

In it, McCarthy said he wanted to ensure that any commission had an even number of appointees by Republicans and Democrats, shared subpoena power between the two parties' appointees and did not include any "findings or other predetermined conclusions" in its organizing documents.

Democrats ultimately agreed to all three demands, but in his statement Tuesday, McCarthy said Pelosi had "refused to negotiate in good faith."

Katko predicted that a "healthy" number of Republicans would still vote for it.

"I can't state this plainly enough: This is about facts," Katko told the House Rules Committee at a hearing on the bill. "It's not about partisan politics."

Pelosi is expected to have enough support to pass the commission legislation as well as a supplemental spending bill to pay for improvements to Capitol security when they come to votes today.

President Joe Biden's administration said it supports the legislation and that the American people deserve "such a full and fair accounting to prevent future violence and strengthen the security and resilience of our democratic institutions."

Trump has told advisers that he is opposed to an independent Jan. 6 commission, according to people who have spoken directly to him about the matter. But he has not gotten involved in McCarthy's efforts to block it, said one of these people, who like others spoke on the condition of anonymity to describe private conversations.

The former president has complained that law enforcement authorities had been more vigorous in dealing with rioters at the Capitol than they were during racial justice protests last summer, according to these people.

Among the potential evidence that could be turned up by the commission is testimony about phone calls between Trump and Republicans in which he was asked to do something to stop the attack.

Trump has privately conceded that the Jan. 6 riot was bad but does not want to say it publicly for fear it will draw more public criticism -- and that his opponents might use the commission to attack him, according to people familiar with his views.

House Homeland Security Committee Chairman Rep. Bennie Thompson, D-Miss., who drafted the bipartisan commission legislation with Katko, said on CNN over the weekend that if a commission is established, then Trump should be called to testify.

The proposed bill would establish an independent 10-member commission, modeled after the investigation into the 9/11 terrorist attacks, that would make recommendations for securing the Capitol and preventing another insurrection. Five commissioners, including the chair, would be appointed by Democratic congressional leaders, while five, including the vice chair, would be chosen by Republican congressional leaders. The panel would have to issue a final report by Dec. 31.

The commission could also force McCarthy to detail his conversations with Trump and others at the White House regarding the attack on the Capitol. During the impeachment trial, it emerged that on Jan. 6, shortly after the mob had broken inside, Trump had rebuffed McCarthy's pleas to call off his supporters, telling him, "Well, Kevin, I guess these people are more upset about the election than you are."

McCarthy deputized Katko to negotiate with Thompson, after discussions with Pelosi on an earlier draft for a commission broke down this spring over disputes regarding its composition and scope. Democrats wanted to focus the investigation on the right-wing groups that promoted the Jan. 6 demonstrations, while Republicans demanded that the panel cast a wider net and consider left-wing extremism, as well.

Katko, who voted to impeach Trump in January, had been a co-author of the GOP alternative to Pelosi's initial bill. But after weeks of negotiating with Thompson, he backed a bipartisan deal exclusively focused on Jan. 6, calling it "a solid, fair agreement that is a dramatic improvement over previous proposals."

McCarthy, however, rejected it out of hand, and during a private House GOP meeting Tuesday, he urged others to vote against it.

"Thanks for not throwing me under the bus, Kevin," Katko said in response, according to a Republican aide.

McCarthy, despite condemning Trump for the riot early on, has since sided with Republican lawmakers eager to stamp out high-level scrutiny of the event. Last week, he backed a campaign to oust Rep. Liz Cheney, R-Wyo., from her House GOP leadership post over her continuing effort to challenge Trump's claims that the 2020 election was stolen and her support for the commission.

Some of the GOP lawmakers who campaigned for Cheney's ouster have been railing against the bipartisan commission deal with equal vitriol.

"The Jan 6th Commission is just another big smokescreen and witch hunt on Trump and his supporters to fuel the hate, while ignoring Antifa/BLM nonstop violence," Rep. Marjorie Taylor Greene, R-Ga., tweeted Tuesday. "It will be used by the media to distract people away from the real damage Biden and Dems are doing to the country."

Information for this article was contributed by Marianna Sotomayor, Karoun Demirjian, Josh Dawsey, John Wagner and Paul Kane of The Washington Post; by Mary Clare Jalonick, Alan Fram, Lisa Mascaro and Steven Sloan of The Associated Press; and by Nicholas Fandos of The New York Times.