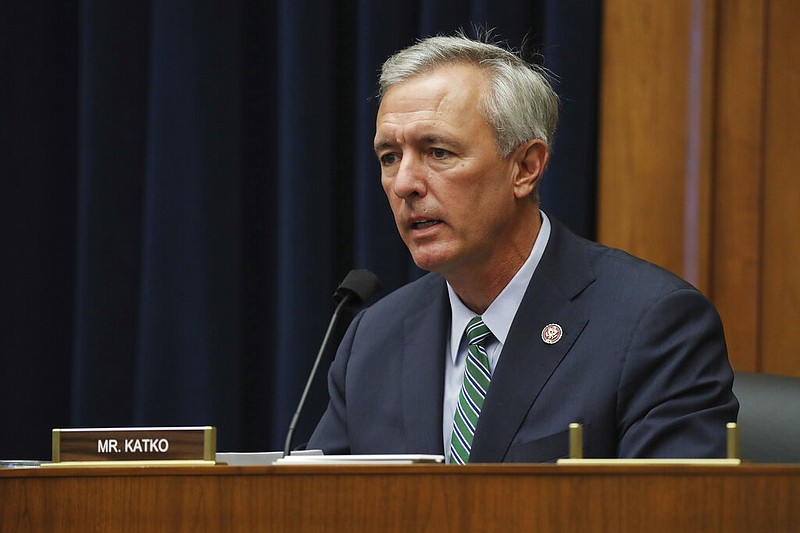 U.S. Rep. John Katko, R-N.Y., questions witnesses during a House Committee on Homeland Security hearing on Capitol Hill in Washington in this Sept. 20, 2020, file photo. Katko on Wednesday, May 19, 2021, was among House Republicans who joined Democrats in voting to create a bipartisan commission to investigate the Jan. 6 attack on the Capitol. Katko wrote the measure with Homeland Security Committee Chairman Bennie Thompson, D-Miss. (Chip Somodevilla/Pool via AP, File)

WASHINGTON — Thirty-five House Republicans joined Democrats Wednesday in voting to create a bipartisan commission to investigate the Jan. 6 attack on the Capitol, risking the wrath of former President Donald Trump and flouting GOP leaders who condemned the proposal as unfairly partisan and unneeded.

“I encourage all members, Republicans and Democrats alike, to put down their swords for once, just for once, and support this bill,” said Katko.

A moderate and a former prosecutor, Katko defended the proposed commission as a fair and needed step toward understanding the riot, how it happened and what security improvements the Capitol needs to prevent a future assault.

“This is about fact. It is not partisan politics,” he said pointedly.

The Republicans who supported the measure included two of Arkansas’ four representatives.

The 35 defectors represented a relatively modest but still significant proportion of House Republicans, of whom 175 opposed the legislation. Their defiance underscored the party’s rift as some lawmakers supported an investigation of the shocking and violent Capitol attack while leaders tried to avoid enraging the former president, whose support they believe they’ll need to win House control in the 2022 elections.

The Democratic-run House approved the measure 252-175 and sent it to the Senate, where Democrats face an uphill fight to garner at least 10 Republican “yes” votes they will need to prevail.

Three Republicans spoke in favor of the legislation: Katko and Fred Upton and Peter Meijer of Michigan. All were among the 10 who’d voted days after the attack to impeach Trump for encouraging his supporters to attack the Capitol. Trump was later acquitted by the Senate.

If not for resistance by the Capitol Police, “Who knows how many of our heads would have been swinging on those gallows” that members of the mob erected outside the building, Upton said.

Meijer, a freshman, took what seemed veiled shots at Trump, House Minority Leader Kevin McCarthy, R-Calif., and some of his GOP colleagues.

Without mentioning names, Meijer said the attack occurred “with the encouragement of prominent elected officials.” He said some who initially criticized the attack “have walked back their words or softened their speech.”

Meijer added, “More troubling, there has been an active effort to whitewash and rewrite the shameful events of that day to avoid accountability.”

Days after the Capitol attack, McCarthy said Trump “bears responsibility” for the rioters’ assault. But he opposed impeachment, eased his criticisms of Trump and opposed creation of the commission. Other Republicans have downplayed the attack, with one comparing the rioters to tourists.

The most prominent of Trump’s GOP critics in the House, Rep. Liz Cheney of Wyoming, did not speak. Her colleagues dumped her from a House Republican leadership position last week for repeatedly criticizing Trump for his role in the Capitol attack and his false claims that he lost the election because of widespread voting fraud.

The measure would create a 10-member commission — with five members appointed by each party — to investigate the Capitol riot.

This story has been updated. It was originally published at 11:50 a.m. under the headline “McConnell says he’ll oppose Jan. 6 commission to probe riot.” An earlier version is below.

WASHINGTON — Top Republicans in Congress are working to stop the formation of an independent commission into the deadly Jan. 6 insurrection at the U.S. Capitol, aligning themselves with former President Donald Trump ahead of a Wednesday House vote on the proposal.

Senate Republican leader Mitch McConnell said Wednesday morning that he will oppose the legislation to create the panel, joining House GOP leader Kevin McCarthy, who announced Tuesday that he won’t support it. Both men claimed the bill was partisan, even though membership of the proposed commission would be evenly split between the parties.

McConnell’s announcement — which came just one day after he said he was “open” to the bill — is a blow to Democrats who say an independent, bipartisan investigation of the violent siege is crucial to prevent it from happening again. While the legislation is poised to pass the House, it will be harder for Democrats to win the 10 Republican votes they need in the Senate without McConnell’s backing.

But even as most Republicans were expected to follow McCarthy’s lead and vote against the bill, few of those who were opposed spoke on the House floor as debate began. And a handful of Republicans who support it spoke forcefully.

“This is about facts — it’s not partisan politics,” said New York Rep. John Katko, the top Republican on the House Homeland Security Committee who negotiated the legislation with Democrats. He said “the American people and the Capitol Police deserve answers, and action as soon as possible to ensure that nothing like this ever happens again.”

Rep. Fred Upton, R-Mich., said that Jan. 6 “is going to haunt this institution for a long, long time” and that a commission is necessary to find the truth about what happened. He said he “heard the shouts, saw the flash-bangs, smelled the gas on that sorry day.”

Senate Majority Leader Charles Schumer, D-N.Y., vowed to force a vote on the bill once the House passes it. He charged that Republicans are “caving” to Trump, who encouraged his supporters to head to Capitol Hill on Jan. 6 to stop the counting of the electoral votes and overturn his defeat to Democrat Joe Biden.

Schumer said that Republicans are trying to “sabotage the commission” and are “drunk” off Trump’s baseless claim that the election was stolen from him. That false assertion, repeated by the mob as the rioters broke into the Capitol, has been rebuked by numerous courts, bipartisan election officials across the country and Trump’s own attorney general.

Trump released a statement Tuesday night urging Republicans to oppose the commission. He called it a “Democrat trap.”

McConnell’s and McCarthy’s opposition comes as some in the GOP are increasingly downplaying the violence of Jan. 6, when rioters brutally beat police, broke in through windows and doors and hunted for lawmakers. Four of the rioters died, including a woman who was shot and killed by police as she tried to break into the House chamber. A Capitol Police officer collapsed and died after engaging with the protesters, and two officers took their own lives in the days after.

The vote is also emerging as yet another test of Republican loyalty to Trump, whose grip on the party remains strong despite his election defeat. House Republicans booted Wyoming Rep. Liz Cheney from their leadership last week for her criticism of Trump’s false claims, installing a Trump loyalist in her place. Cheney, in turn, suggested to ABC News that a commission could subpoena McCarthy because he spoke to Trump during the insurrection.

The two GOP leaders’ positions will almost certainly mean fewer Republicans will support the commission, as most in the party are still loath to upset Trump. But the votes in the House and Senate are also exposing expose divisions in the party.

Missouri Sen. Roy Blunt recommended that his colleagues oppose the commission. Blunt, the top Republican on the Senate Rules Committee, is working on a bipartisan report with his Democratic colleagues that will include recommendations for security upgrades. He said an independent investigation would take too long and “frankly, I don’t think there are that many gaps to be filled in on what happened on Jan. 6, as it relates to building security.”

Other Senate Republicans support the commission. Utah Sen. Mitt Romney said Tuesday that given the violent attack, “we should understand what mistakes were made and how we could prevent them from happening again.” Louisiana Sen. Bill Cassidy said he doesn’t agree with McConnell that the bill is slanted toward Democrats and “I’m inclined to support it.”

Maine Sen. Susan Collins, a Republican, said that she supports the idea of a commission but that the House bill would need adjustments. She echoed McConnell’s concerns that the chair of the commission, who will be appointed by Democrats, would have more power to hire staff. The bill directs the chair to hire employees “in consultation with” the vice chair, who would be appointed by Republicans.

Romney, Cassidy and Collins were among the seven Republican senators who joined 50 Democrats in voting to convict Trump at his second impeachment trial in February. But the vote fell short of the two-thirds needed to convict him of inciting the insurrection. Had Trump been convicted, the Senate could have barred him from seeking public office again.

South Dakota Sen. John Thune, the No. 2 Republican in the Senate, cited concern in the caucus that the investigation could be “weaponized politically” in the 2022 election cycle.

“I want our midterm message to be about the kinds of issues that the American people are dealing with,” Thune said. “It’s jobs and wages and the economy, national security, safe streets, strong borders and those types of issues, and not relitigating the 2020 election.”

Modeled after the investigation into the Sept. 11, 2001, attacks, the House bill would establish an independent, 10-member commission that would make recommendations for securing the Capitol and preventing another insurrection. It would have to issue a final report by Dec. 31.

House Speaker Nancy Pelosi, D-Calif., called McCarthy’s opposition to the commission “cowardice.” She released a February letter from the GOP leader in which he asked for an even split of Democrats and Republican commissioners, equal subpoena power and no predetermined findings or conclusions. The bipartisan legislation accommodates all three of those requests, she said.

“Leader McCarthy won’t take yes for an answer,” she said.