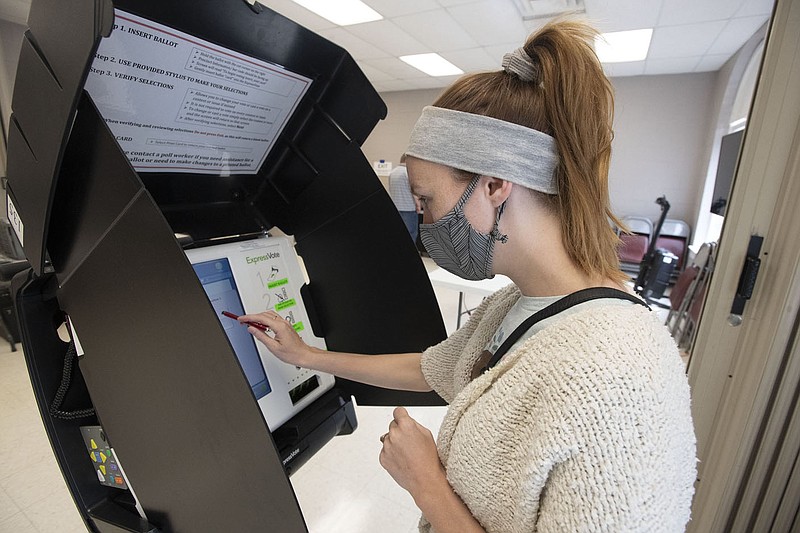 Bree McMahon of Fayetteville votes Tuesday at Central United Methodist Church. There were two contested races for positions on the Fayetteville Board of Education. Visit nwaonline.com/210519Daily/ and nwadg.com/photo. (NWA Democrat-Gazette/J.T. Wampler)

The incumbents for the Fayetteville and Rogers school boards all secured their seats for another term, while another incumbent in Fort Smith was defeated, according to final, unofficial results from Tuesday's school election.

Nika Waitsman, 54, secured her second term on the board. She's also in her second year as board president and has volunteered in Fayetteville schools since 1998.

"I am so grateful for the opportunity to continue serving our school district and our community. I have been overwhelmed by the incredible support I have received throughout this campaign," Waitsman said.

Waitsman says she's a full-time volunteer who wants to increase the board's engagement with the community. She'd also like to raise teacher salaries.

"I am deeply invested in the work and the important initiatives that are taking place in our school district. I look forward to continuing to prioritize academic achievement for all students in the years ahead, and I am really thrilled to be able to still be a part of the ongoing decision-making regarding the bond restructuring facilities investments," Waitsman said.

Waitsman has children ages 19, 22 and 26, all of whom graduated from the district.

Smith congratulated Waitsman on her win.

Fayetteville's Zone 1 covers the east and northeast portions of the district.

Hurley said she'd also like to see the board direct its efforts toward what school will look like for students in the fall. She expressed concerns about learning gaps and mental health challenges for students because of the covid-19 pandemic.

Hurley has two children: a third-grader at Washington Elementary and a fifth-grader at Owl Creek Elementary.

Because it's an at-large seat, all district residents could vote in the race.

Suzanne Spivey, 61, is the incumbent in Rogers. The board appointed Spivey in March 2020 to fill a vacant Zone 3 seat. She had to stand for election in order to retain the seat for the remaining four years on the term.

"Rogers Public Schools gave me a wonderful wonderful career and I am honored that the voters of Zone 3 voted for me to continue to serve our students in this district," Spivey said.

Spivey said she'd like to see attention paid to student's preparation for life after high school. Spivey sees growth as the biggest issue facing Rogers. She also wants to ensure students and staff always have "beautiful" facilities in which to work.

Spivey has two adult children and retired in 2011 after nearly 30 years in education, most of which she spent in Rogers. She was head of the freshman academy at Heritage for a few years before she retired. She previously taught at Elmwood Junior High School.

Spivey complimented Pledger for the race she ran.

"I ran for School Board because my fellow teachers asked me to, and I'm glad that I answered that call," Pledger said. "I had an amazing time getting out in the community and talking to parents, teachers, students and community members about what they would like to see in our community. Suzanne ran a great race, and I'm so glad that, even though it didn't turn out the way we'd hoped, a teacher will be on the Rogers School Board."

Zone 3 covers a portion of the district east of downtown and south of Beaver Lake. Only those who live in the zone were eligible to vote.

Challenger Matt Blaylock received 1,025 votes (63%), while incumbent Bill Hanesworth received 592 votes (37%) in the race for the School Board's at-large, Position 4 seat, according to final but unofficial results from the Sebastian County Clerk's Office. Blaylock gets a three-year term.

Blaylock, 44, said Tuesday night he looks forward to getting started on the board.

"I'm going to have a learning curve to navigate some of these waters, but I've got some great people in my corner to help me do that," Blaylock said. "This is kind of the end of the beginning if you will, and we've got to get to work."

Blaylock is president of Blaylock Heating, Air Conditioning & Plumbing Services in Fort Smith. He also serves on the city's Plumbing Advisory Board. He has a bachelor's degree in professional studies with a concentration in community outreach from Arkansas Tech University. Blaylock has two children -- an 11th-grader and an eighth-grader -- enrolled in the district.

Hanesworth, 71, is the chief operating officer of the Littlefield Oil Co. in Fort Smith. He is board president and has served on the board since 2015.

Sebastian County also featured a race for a five-year term in Position 3 on the Mansfield School Board, which is held by Ronnie Black. Jan Carlton received 66 votes (59%) against Trent Hayslip's 36 votes (32%) and Adam Hecox's 9 votes (8%), according to unofficial results. Hecox withdrew from the race on Thursday, according to Meghan Hassler, Sebastian County's election coordinator.

Barret Ewing received 210 votes (86%) while Shanna Morgason got 34 votes (14%) in the race for the Position 2 seat on the Alma School Board, according to unofficial results provided by Bill Coleman, chairman of the Crawford County Election Commission.

Ewing, 40, is the director of engineering and operations at Arkansas Valley Electric Cooperative in Ozark. He graduated from the University of Arkansas with a bachelor's degree in electrical engineering. Ewing has two children -- a first-grader and another who will start kindergarten in 2022. 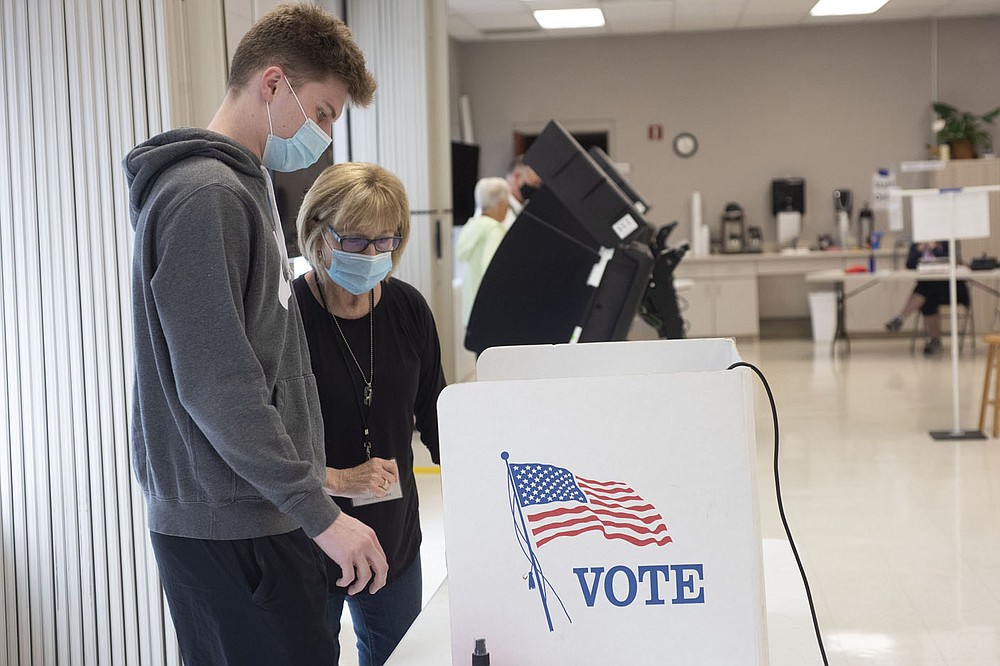 Jan Turner of Fayetteville (left) votes with the assistance of poll worker Paulette Lilly Tuesday at Central United Methodist Church. It was Turner's second election to vote in. There were two contested races for positions on the Fayetteville Board of Education. Visit nwaonline.com/210519Daily/ and nwadg.com/photo. (NWA Democrat-Gazette/J.T. Wampler) 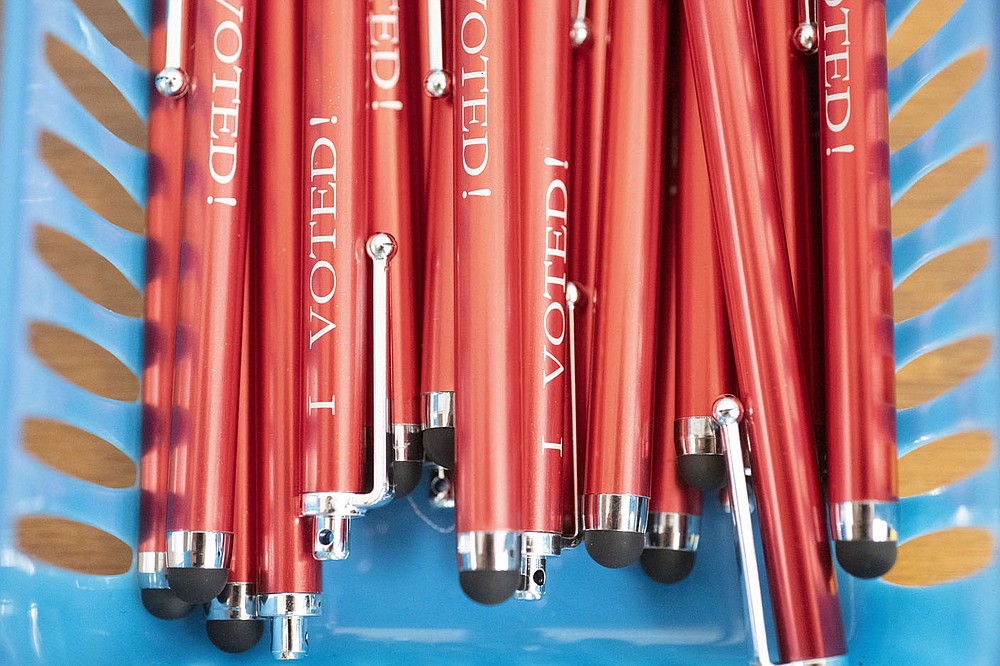 I voted stickers were replaced with styluses for voters Tuesday at Central United Methodist Church in Fayetteville. There were two contested races for positions on the Fayetteville Board of Education. Visit nwaonline.com/210519Daily/ and nwadg.com/photo. (NWA Democrat-Gazette/J.T. Wampler)
ADVERTISEMENT