TELEVISION: After 2 decades and 2 kids, Pink is still a rock star 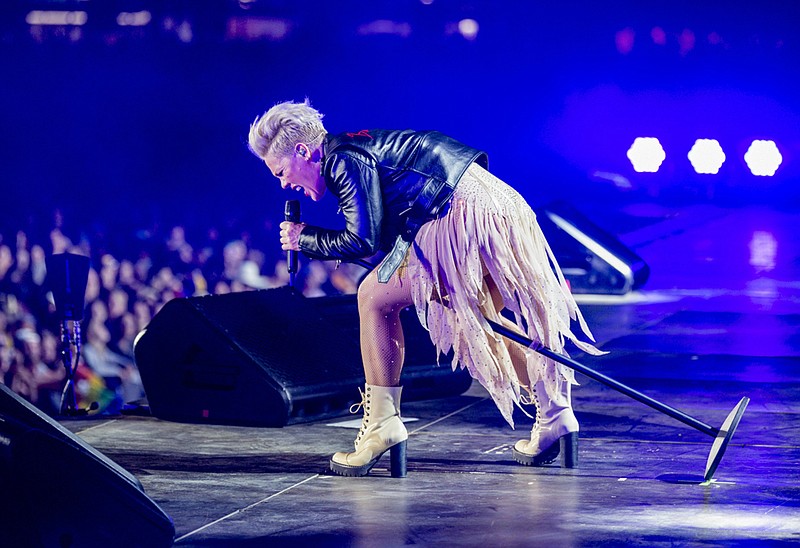 This image released by Amazon shows singer Pink performing in a scene from her documentary, “Pink: All I Know So Far,” debuting Friday on Amazon Prime Video. (Andrew Macpherson/Amazon Content Services LLC via AP)

NEW YORK — Pink is grappling with the fact that her 9-year-old daughter, Willow, with husband Carey Hart, is on the cusp of the 'tween years.

"It's still the salad days, she's still my baby," said Pink in an interview over Zoom. "But she's starting to ask me questions about deodorant and bras." As if on cue, a siren blares in the background. "And there's my ambulance," she deadpans.

Willow Sage and son, Jameson Moon, are a huge creative inspiration for the singer, whose real name is Alecia Moore. Earlier this year she released a single called "Cover Me in Sunshine " featuring Willow's vocals, which Pink says happened naturally.

"She was in the room when I was recording. She liked the song and was humming, and she has such a cute, pretty little voice. I was like, 'You want to sing on it?' She's like, 'Sure.'"

In the new documentary "Pink: All I Know So Far," debuting Friday on Amazon Prime Video, viewers go back to 2019 for Pink's "Beautiful Trauma" world tour with Hart, Willow and Jameson in tow. The kids join her for rehearsals, she wrangles them for bedtime and feels guilty when Willow vents that Jameson, a toddler at the time, gets all the attention.

"I wasn't sure anybody would want to see that," said Pink of the concept of capturing mom life on camera, but her director, Michael Gracey, convinced her it was something to see.

"He thought it was fascinating that someone that was headlining stadiums would be a full-time mom. He had never seen that before and thought it was a story worth telling. After I thought about it, I was like, 'Well, there's not a lot of women headlining stadiums and there's certainly not a lot of women touring the world with their family.' I just thought it was a time stamp ... and something for the kids to watch one day when they've built this narrative in their head about how they weren't loved or cared for."

It's a busy time for Pink, who also has a new song called "All I Know So Far," and will accept the Icon Award at the Billboard Music Awards on NBC at 7 p.m. CDT Sunday. Past recipients include Jennifer Lopez, Janet Jackson and Mariah Carey.

Pink says she's "horrible" at acceptance speeches because she feels "awkward" and says her "jokes get bad," but she made a pretty memorable one in 2017 at the MTV Video Music Awards. While accepting another prestigious award, the Michael Jackson Video Vanguard Award, she spoke to Willow, who was in the audience with her dad, about the importance of authenticity and not conforming to conventional standards of beauty. The speech is included on the live album "All I Know So Far Setlist."

In an interview, Pink talks about her aerial silks routine, acting and what she thinks of a possible "Lady Marmalade " redo.

You're known for performing aerial silks in your performances and doing acrobatics. Do you foresee a time you'd want to give that up?

I'll always want to. It's just if people are going to want to see that stuffed into a leotard. I mean, that's the real question, isn't it? (Laughs.)

You co-starred with Gwyneth Paltrow, Josh Gad and Mark Ruffalo in the 2012 movie "Thanks for Sharing." Would you ever want to act again?

No, it's excruciating. I mean, I would do Broadway, that kind of acting, even though that's also excruciating, but no. I don't want to see this (points to face) in hi-def any more than I have to (laughs.)

Speaking of Broadway, you worked with the "Dear Evan Hansen" songwriters — Benj Pasek and Justin Paul — on the "All I Know So Far" single. What was that like?

They're freaking awesome. I loved "The Greatest Showman" so much, and "Dear Evan Hansen" and "La La Land." They're such good storytellers and I'm a theater geek.

There's talk of a "Lady Marmalade" re-record with names including Miley Cyrus and Halsey singing your part. What do you think of that?

It would be amazing. Why not? I saw Miley do "Silent Night." That girl could sing the phone book to me. She's so good. Her voice is so soulful and Halsey's rad, too. I think it'd be cool.