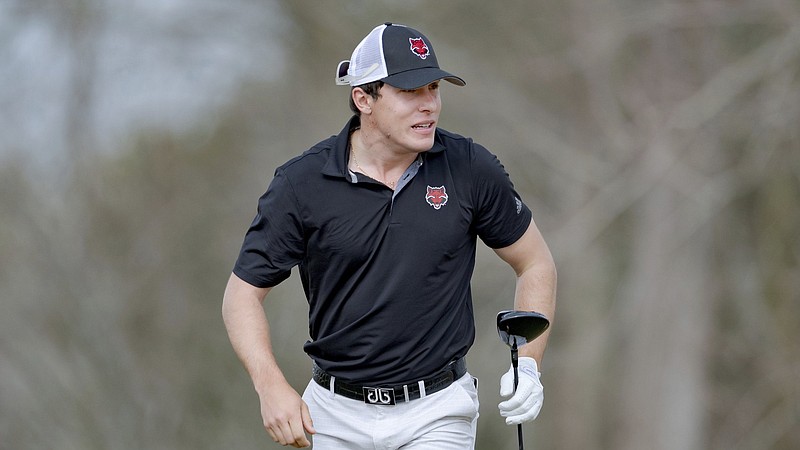 Arkansas State senior Zan Luka Stirn, shown earlier this season, fired a 6-under 66 in the final round of the NCAA Noblesville (Ind.) Regional on Wednesday to finish third. The previous best regional showing by an ASU golfer was 25th place. (AP/Matthew Hinton)

Arkansas State University's Zan Luka Stirn shot a 6-under 66 in the final round of the NCAA Noblesville (Ind.) Regional on Wednesday at Sagamore Golf Club, bringing his tally to 7 under for the week and earning him a tie for third place.

The senior from Kranj, Slovenia, finished three strokes behind Purdue's Cole Bradley (10 under), who carded five birdies on the back nine to claim the individual medalist honor and advance to the NCAA Men's Golf Championships.

Stirn followed Tuesday's 6-under performance with a 4-under front nine. He led the field at 8 under after back-to-back birdies on the 11th and 12th holes, and another on the 14th. He faltered with a pair of late bogeys to allow Bradley and West Virginia's Mark Goetz (8 under) to surge ahead.

Stirn tied for third with Missouri's Ross Steelman at 209, smashing the previous best regional mark in ASU history set be Julien Sale with his 216 finish good for 25th place at the 2019 NCAA Louisville (Ky.) Regional.

"The last two days [watching Stirn] were arguably two of the best rounds of golf that I've been around as a coach," ASU Coach Mike Hagen said. "Given the circumstances, the pressure individually and for our team to advance and just getting to a regional championship, two 66s back-to-back like that was unbelievable."

The Stirn-led Red Wolves clawed to a seventh-place finish with a 1-under 287 effort on the final day, ending their sixth NCAA regional appearance at 10-over 874 and 15 strokes off the five-team cut line to advance. The team score set a new program best, topping ASU's previous record of 878 set at the 2019 regional.

Texas earned the team title at 20 under, advancing to the championship along with Tennessee (15 under), North Carolina (15 under), Louisville (10 under) and Alabama-Birmingham (5 under).

Stirn recovered from a first-round 77 with Tuesday's second-round 66, which broke the program's single-day regional record of 67 set by Jason Jackson in 2000.

"He and Julien have rewritten the record book here," Hagen said. "It's only fitting that [Stirn] went out and did this. Whether he won or not, to have top 5 at a regional and to go out the way he did is very fitting for him."