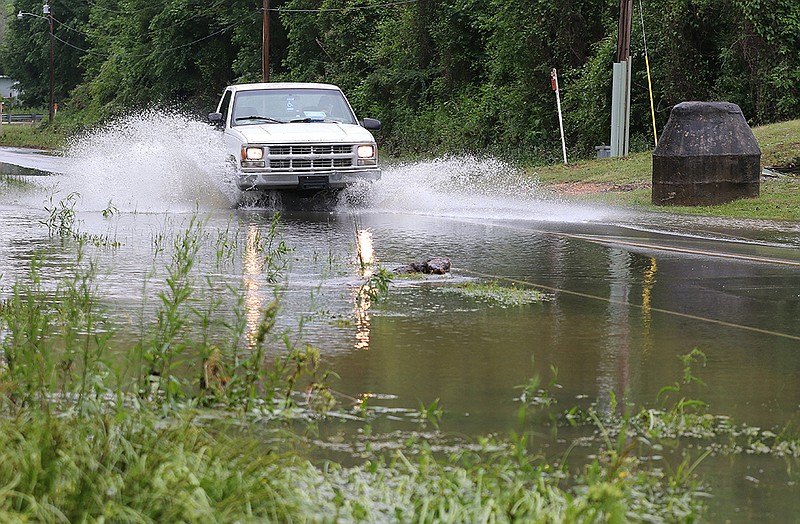 A truck rolls through water running across Brookwood Road in Alexander early Wednesday. Many creeks and low-lying areas in Central Arkansas were flooded by heavy rainfall. (Arkansas Democrat-Gazette/Thomas Metthe)

Parts of Central Arkansas were hit with heavy rain in the first half of the week, leading to flooding and several water rescues overnight Tuesday.

In Saline County, at least 15 people were rescued from flash flooding after heavy rainfall late Tuesday and early Wednesday, said Brandon Guillot, director of emergency management for the county. At least five homes were damaged, with water rescues required at three of them, he said. No injuries were reported.

"Based on local collection, it appears the city had around 4-5 inches that fell within a very short timespan," Scott said in a statement. "Thank you to our Bryant Public Works Department, Bryant Fire Department, and the Bryant Police Department for their quick response and ongoing efforts to keep our community and citizens safe. We have more rain expected today so please stay safe out there, if a roadway is underwater, turn around and find another route."

As much as 3 to 5 inches of rain fell Tuesday in much of Faulkner and Saline counties and portions of Grant, Garland and Perry counties.

The rain that fell in Arkansas was part of a system that has deluged much of the South throughout the week, resulting in deadly floods in other states.

A flash flood watch remained in effect for much of Arkansas on Wednesday. The western half of the state could see another 1 to 2 inches through today, according to the National Weather Service's North Little Rock station.

"A lot of Faulkner County has had 3 or more inches of rain in the last three days. But looking at the state as a whole, it's a pretty small area. Maybe half a dozen counties have been impacted with the heaviest rain," senior forecaster John Lewis said. "The soil in those areas are pretty saturated, and it won't take a whole lot more rain to start the flooding process again."

"The biggest concern we have is safety," he said. "Our folks are prepared."

The Arkansas Game and Fish Commission issued a 24-hour flood advisory for Lake Conway on Wednesday morning because of the rainfall. The rate of rise slowed during the day, said Randy Zellers, assistant chief of communications. However, if an inch or more of rain falls over the lake in the next 24 hours, it could cause the lake to rise above flood stage.

The advisory is for property owners in the watershed of Craig D. Campbell Lake Conway Reservoir to prepare for potential flooding.

The National Weather Service warns against trying to drive through floodwaters. Six inches of fast-moving water can knock over and carry an adult and will reach the bottom of many sedans, causing loss of control and possible stalling, according to the agency.

The weather service cautioned that a foot of floodwaters can float some cars, and 2 feet of rushing water can carry away most vehicles, including SUVs and pickups.

Heavy rains also hit parts of Texas on Wednesday before the storms moved to Louisiana. Parts of Oklahoma and Mississippi were also under flood watches.

Some places across Texas and Louisiana have picked up more than 15 inches of rain since the start of the week in what's proved a deadly onslaught of high-impact flooding.

The Louisiana Department of Health said Wednesday that three deaths had been confirmed to be storm-related.

Flash flood emergencies were declared in Baton Rouge and Lake Charles, La., late Monday after a foot of rain came down, inundating streets and vehicles, seeping into homes and causing at least one fatality.

Some schools in Louisiana were closed Wednesday in anticipation of severe weather.

High-resolution weather models suggest that an arcing batch of thunderstorms and extremely heavy rainfall will continue to plow almost due east, passing over the Gulf of Mexico and only clipping the coast as it tracks south of the Sabine River at the Louisiana-Texas border. That may be encouraging news because it would cut down on rainfall amounts farther inland from the immediate coastline, with the storms usurping the greater instability, or energy for lift, and keeping the most favorable conditions for heavy rainfall offshore.

Uncertainty was high, though, since computer models were struggling to accurately predict the ongoing storms, The Washington Post reported.

"At this time, do not see a whole lot of model solutions getting the western parts of this activity correct, so not really sure how far north or northeast this will expand," wrote the National Weather Service office in Houston.

There are indications that the offshore trend of that rainfall could change today, with bands of heavy rain stalling offshore of southwest Louisiana and expanding northward into an already hard-hit Lake Charles, a place that dealt with two direct hurricane strikes -- including that of Category 4 Hurricane Laura -- in 2020 and a damaging deep freeze and ice storm in February.

Looking ahead, pockets of heavy rain are forecast to continue today and Friday in east Texas and western Louisiana, with some indications of a break in the action by Saturday morning.

However, concern is growing that a renewed "fire hose" of moisture emanating from the Gulf of Mexico could be focused and enhanced by a nose of dry air from the northeast, rejuvenating heavy rain and storms late Saturday and into Sunday. Confidence in this scenario is low, but any additional rainfall could prove problematic in an area where the ground is already saturated. New Orleans, for instance, has picked up more than 2 feet of rain since the start of April.

Information for this article was contributed by staff members of The Associated Press and Matthew Cappucci of The Washington Post.