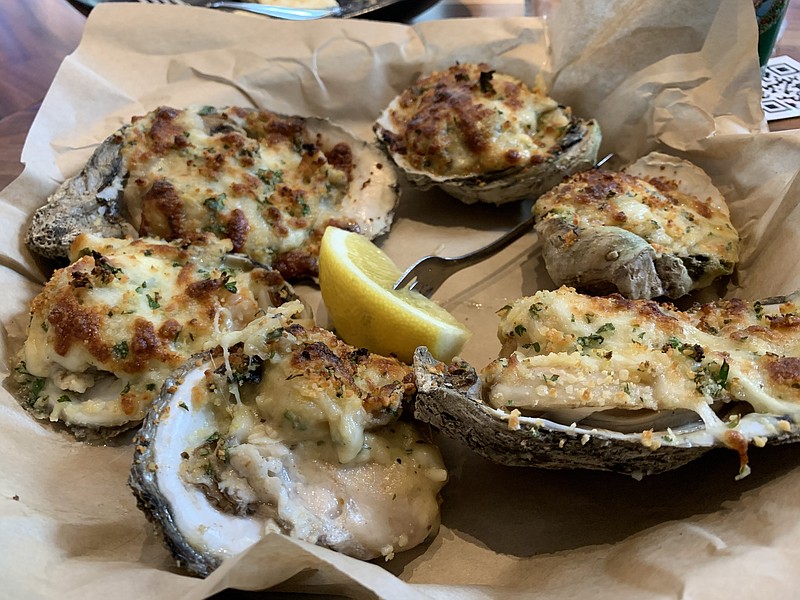 Six Oysters Bienville at the Oyster Bar made for a hefty appetizer or a good-sized entree. (Arkansas Democrat-Gazette/Eric E. Harrison)

If you were a devout patron of the Oyster Bar in Little Rock's Stifft Station, but have not been in since it reopened, you likely will not recognize the place.

The restaurant, which used to be comfortably down-at-heel — or, if you're feeling less charitable, enjoyably shabby — has been revised, renovated and rebuilt, increasing in size by the addition of the corner storefront that used to be a code enforcement station and is now the Oyster Bar's oyster bar.

The red-and-white-check tablecloths are gone — there are no tablecloths at all anymore — and so are the dividing walls and the wood paneling; now, with the exception of some stout pillars where the back wall used to be, the dining room is open, airy, bright (windows looking out onto Markham Street let in a lot of light) and loud. The color scheme is black-and-white, the tabletops are brown; there's corrugated metal along the long bar-like structure that is the restaurant's only structural survivor of what used to be.

The menu has gone through a similar reconstruction, undergoing an upscaling that reflects not just a higher level of cuisine but a higher standard for seafood. Chris Tanner, who with his wife, Samantha, bought the place from retiring Virginia Boyd in 2019, explained at the time that he would be shopping at top markets on all three coasts. As one inevitable result of the uptick in quality, you probably also won't recognize the prices, which, of course, are considerably higher than they were in the old days. Tanner also kicked up the wine list several notches, and the beer list now has 20 options.

Though the menu retains the fried baskets that used to be the place's main draw, what's front and center at the Oyster Bar now is oysters. Fresh out of the shell — and there's a separate menu of which oysters are available on any given day, where they came from and what level of salinity they represent. They're shucked to order, so orders of a dozen ($24) or half-dozen ($12) may take a little longer. Some fancier oysters cost more.

We were a little leery about raw oysters, but we did want oysters, so we sprang for the six-for-$18 Oysters Bienville, some of the fattest oysters of our experience (we had a real "Walrus and the Carpenter" flashback, yes we did), cooked and served in the shells and topped with a lively blend of melted cheeses, garlic, baby shrimp and sliced mushrooms. Half a dozen made for a fine-size entree; you can get a full dozen for $36 but we would advise doing so only if you're dividing it between two (or more) people, and you may not want to share. 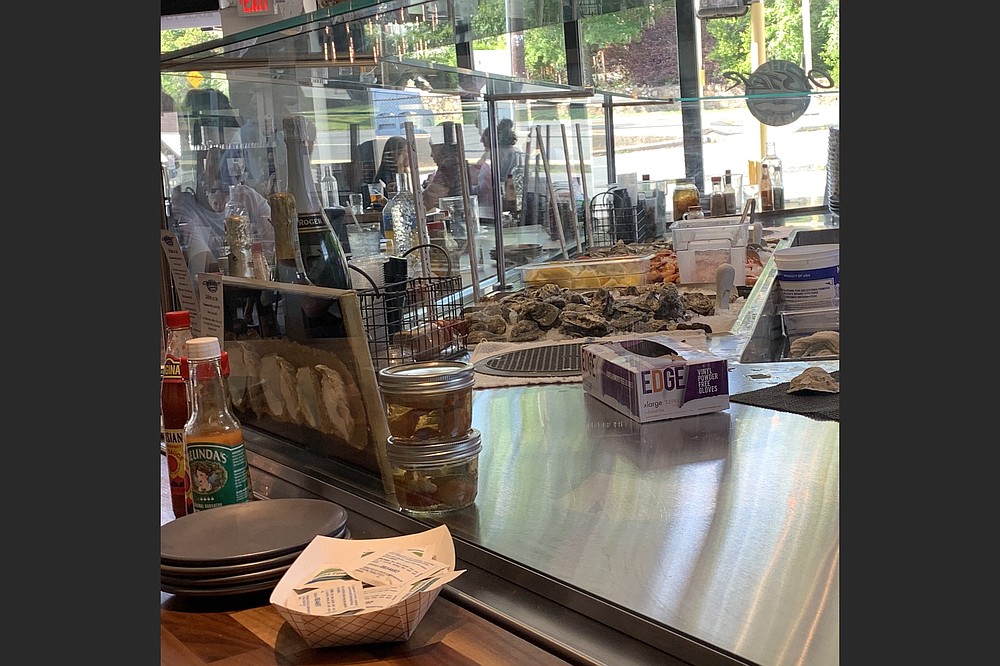 We also enjoyed our Grilled Shrimp entree ($17), eight plump, firm, medium-size and perfectly spiced shrimp on a plate with two sides — some unexpected diced andouille sausage enlivened our corn-and-red-pepper macque choux; our six hush puppies were unremarkable, also unexpected, considering how much livelier they were when we had them on the side of a to-go order in December (see below). If we have one complaint, it's a mild one: an overgenerous amount of parsley garnish on the shrimp.

Making sure the fried-food contingent was well represented, we ordered up the US Farm Raised Catfish basket ($15), two pieces of perfectly fried and well-drained catfish in a tasty, crisp cornmeal batter with a couple of hush puppies and a choice of side; an odd tang, a spice or possibly just too much of a touch of salt, in the coating on our onion rings bothered us a bit.

We welcomed renewing our acquaintance with the Smoked Fish Dip ($10), smoked king mackerel with herbs and an olive-oil mayonnaise served with saltines. It's big enough to serve as an entree or to share as an appetizer. 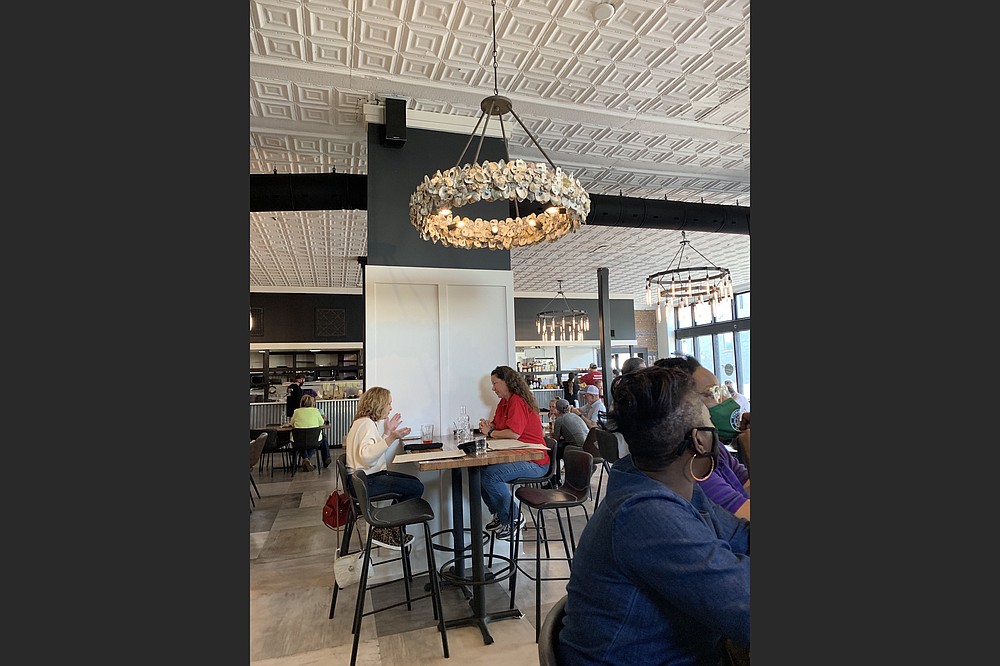 We regretfully did not renew our experience with the Warm Buttered Lobster Roll ($26) we got to-go in December. To recap from our Takeout Tastings review: "There was a lot more lobster in the warm buttered roll than first appeared, and the combination of good flavor and good mouth feel went a long way to assuaging our anxiety over the lunchtime cost. Also making us feel more like, or at least closer to, that we'd gotten our money's worth: The sandwich comes with choice of one of nearly a dozen side items."

A generous slice of Key Lime Pie ($7.50) on which we allowed our waitress to upsell us, on the condition that she box it up to go, was a little pale when it came to the lime tang, and although the crust was excellent, it turned out in some places to be at least two-thirds of the entire depth of the slice.

The menu also features three other kinds of prepared oysters — wood-grilled, Rockefeller and Coursey's Bacon and Leek; po'boys, shrimp or fish tacos; and several appetizer items, including a peel-and-eat shrimp plate. If you just can't bring yourself to consume seafood, there are a few other options — a cheeseburger, a smoked turkey melt and three salads to which you can add meat or seafood for an extra cost. 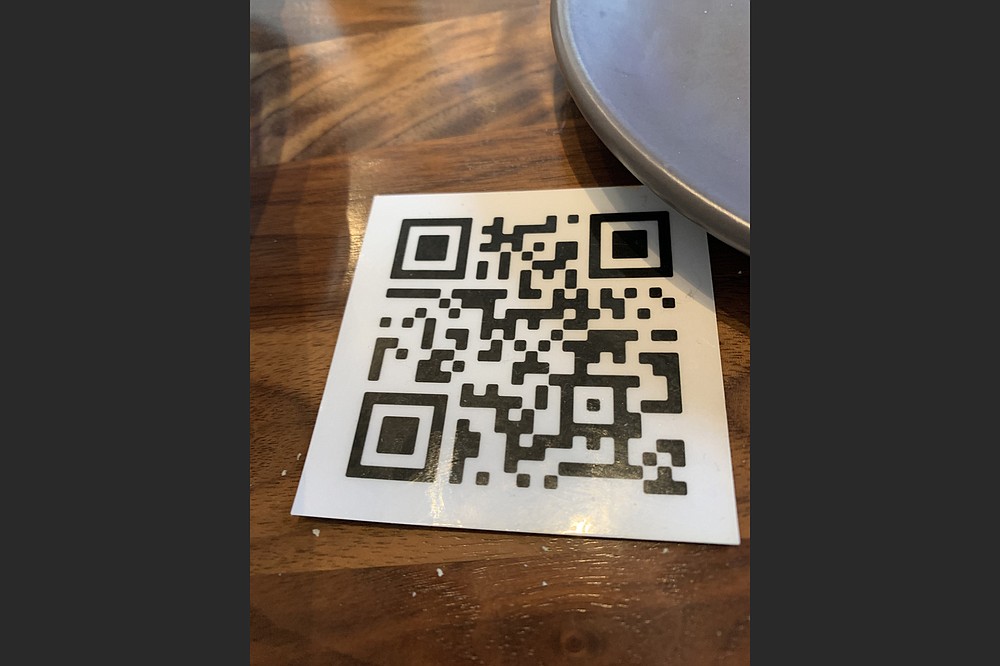 The restaurant prefers customers use a non-contact QR to call the menu up on their cell phones, but paper menus are available for those who can’t or won’t. (Arkansas Democrat-Gazette/Eric E. Harrison)

The restaurant has made some concessions to social distancing, but as packed as it was for lunch and dinner recently, you wouldn't necessarily know it. At the oyster bar, for example, pairs of chairs are in fact six feet from one another, but the person sitting in the right chair in one pair and the person sitting in the left chair in the adjacent pair aren't actually exactly six feet apart. Same with some of the tables in the main dining room. The restaurant prefers you use a non-contact QR to call the menu up on your cellphone, but paper menus are available for those who can't or won't.

We mentioned that it was loud; customer volume added to fairly loud music bounces off what appears to be the original textured tin ceiling tiles. When customers and wait staff are both wearing masks, that can lead to misinterpretations.

Other than that, we got excellent service at dinner and good service at lunch.