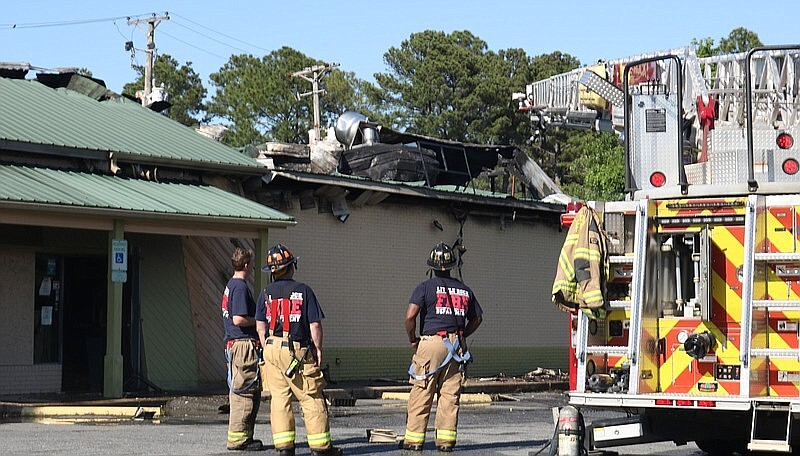 We have not heard by deadline anything more on the cause of the Friday fire that heavily damaged the Sims Bar-B-Que at 7601 Geyer Springs Road, Little Rock.

The Little Rock Fire Department got the call just before 3 p.m. but by the time they reached the restaurant, the fire had already broken through the roof; it was too intense for firefighters to get inside, so they ended up setting up the ladder truck and sprayed water from above. All the employees and any customers who were inside at the time the fire began got out safely; the fire was out by 5 p.m. and the fire marshal's preliminary assessment concluded the fire was likely not suspicious.

We also have no word on when or whether the restaurant will reopen, but in the meantime, you can get your Sims fix at two other Little Rock locations, at 2415 Broadway — the place to which the original restaurant, which first opened in 1937, moved from its original location at 716 W. 33rd St., Little Rock — and 1307 John Barrow Road. The website is simsbbqar.com.

The parking areas around Restaurant Bar Mar y Tierra Seafood & Grill, 1900 W. Third St., Little Rock, have been paved and striped, and pilings have sprung up in front to separate the parking lot from the street. The construction dumpster has been removed from the restaurant's east side. The latest word from manager Edgar Torres? The restaurant is still awaiting final inspections before it can open. We're still standing by awaiting a telephone number; the website — tinyurl.com/f92h9vfz — features a map and tentative operating hours: 11 a.m.-10 p.m. Monday-Thursday, 11 a.m.-1 p.m. Friday-Saturday, 11 a.m.-9 p.m. Sunday.

And no, we still have no confirmation on when or whether Samantha's Tap Room & Wood Grill, 322 Main St., Little Rock, will reopen. It has been closed since mid-February when bursting pipes caused by an ice storm flooded its basement. The phone number, (501) 379-8019, has not been disconnected but its voicemail-box is full; there is nothing new either on the website, samstap.com, or the Facebook page (facebook.com/samanthastaproom). However, co-owner Chris Tanner tells the Arkansas Money & Politics site (armoneyandpolitics.com) that most of the damage is repaired and he's waiting on various pieces of equipment, which he expects to be shipped soon, but declined to provide a date for Samantha's reopening — he hopes to get back open this summer, possibly in the middle of June.

Lonchera Malibu, a food trailer parked at 7415 Colonel Glenn Road, Little Rock, is a second operation from the people who operate Malibu Cafe, 402 Louisiana St., Little Rock, and has been getting some social media space (tinyurl.com/sfwbmcd8). Material for tacos, quesadillas, burritos and burgers are cooked downtown and transferred to the food trailer, which operates 5-9 p.m. Monday-Saturday. The Facebook page lists two phone numbers — we got through at (501) 416-3285; the other is (501) 744-6369.

Meanwhile, The Root Cafe, 1500 S. Main St., Little Rock, is "bringing back the dishes" as "our first step toward an early July opening for dine-in," according to a recent e-blast to customers. The move has a two-fold purpose: "We are thrilled to be cutting down on waste and getting to show off our cute dishes!" Until then, all seating will remain outside (first come, first serve), with orders still placed at the counter; customers are asked to wear a mask when not at their tables. To-go, pickup and third-party delivery services will continue. The phone number is (501) 414-0423; the website is therootcafe.com. 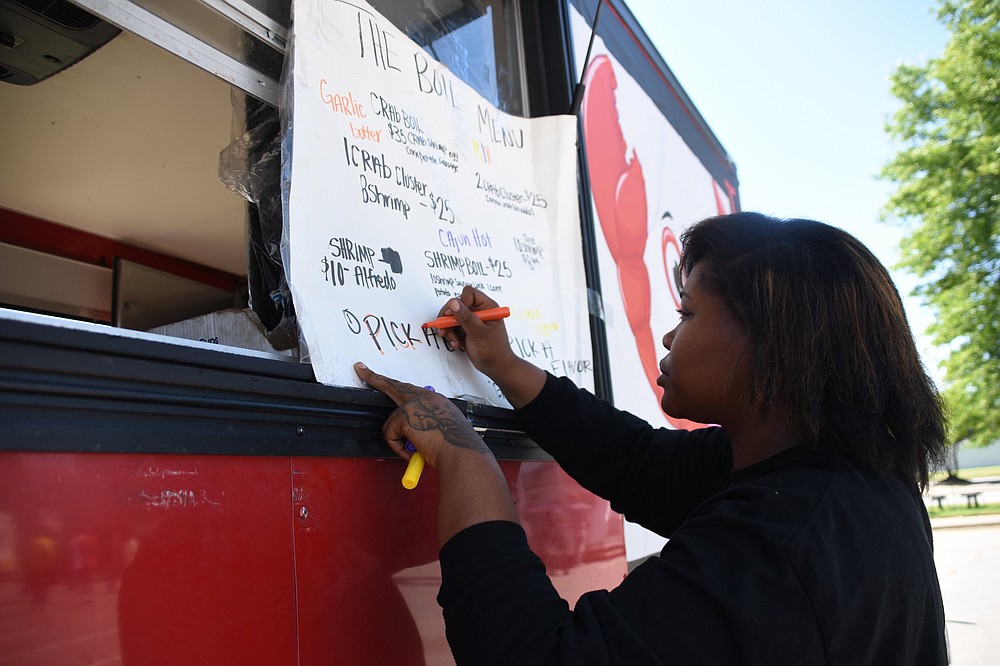 Renea Daniels, co-owner of The Boil, adds details to the menu for Food Truck Friday on May 14 at Simmons Bank Arena in North Little Rock. The food truck will be part of this week’s lineup as well. (Arkansas Democrat-Gazette/Staci Vandagriff)

A new Wendy's location has opened at 281 N. Main St., Farmington, the ninth location of the franchise in Northwest Arkansas and one of 51 in the state, all owned and operated by North Little Rock-based franchisee Wendy's Fourjay, LLC. We're told owner/developer Farmington JK, LLC, is working on a Starbucks adjacent to the Wendy's, and is also scheduled to open soon. Hours are 6:30 a.m.-10 p.m. daily. The phone number is (479) 300-2200. 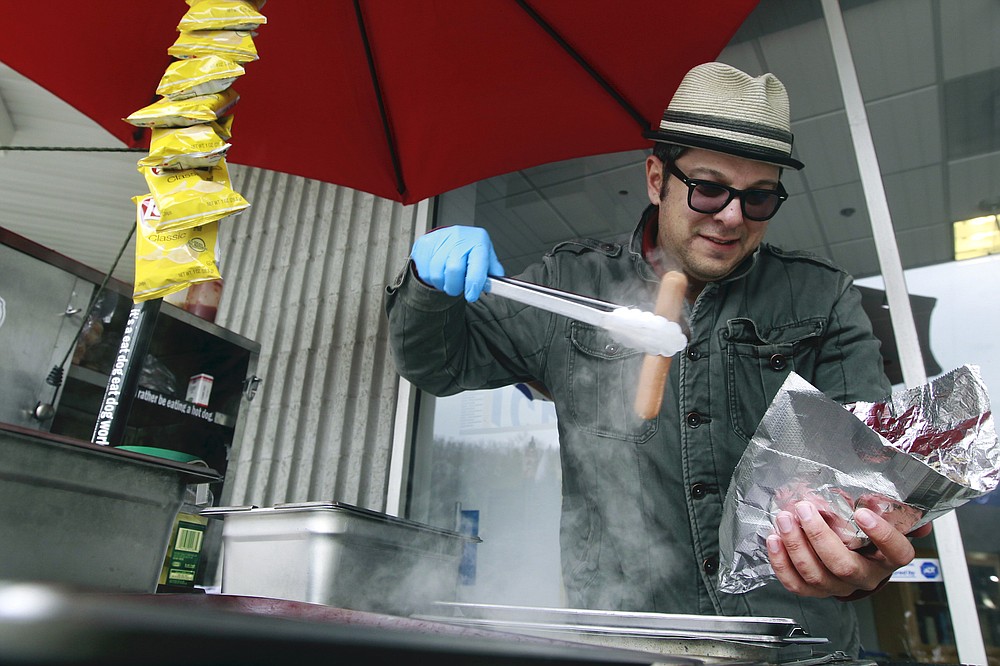 Mike Juiliano, aka Hot Dog Mike, serves up a hot dog in 2013. Juiliano, who has been living in North Carolina, will be back in Little Rock for a benefit June 18-19. (Democrat-Gazette file photo)

And Michael Juiliano, aka Hot Dog Mike, is planning a "10 Year Reunion coming soon to Little Rock Arkansas. Because 2020 didn't count. Stay tuned for details." That's according to Juiliano's Facebook page (facebook.com/michaeljuilianoAVL). Expect him to be vending hot dogs, "11-2ish and 5-7ish" — that's p.m. — June 18-19 at Domestic Domestic, 5501 Kavanaugh Blvd., Little Rock, as part of a "Hot Dogs for a Cause" benefit for the Eli Talley Foundation (started in memory of Eli Talley to "positively [affect] the lives of children with cancer through the gift of music, by helping fund important research and assisting families on their journey through childhood cancer"). Juiliano, who operated a hot-dog cart and briefly a restaurant on East Third Street, moved to New Jersey in 2013 and has been living for some time in Fletcher, N.C. Visit the Facebook events page, tinyurl.com/57bajm5w.