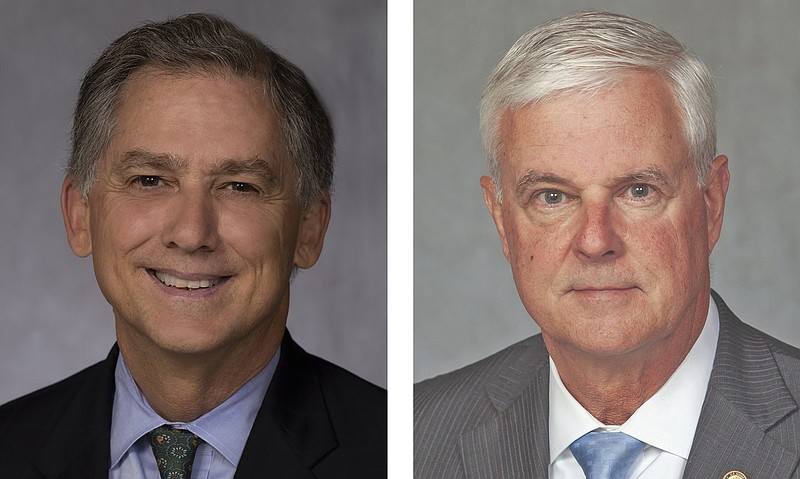 Republican U.S. Reps. Steve Womack of Rogers and French Hill of Little Rock voted Wednesday in favor of creating a bipartisan commission to investigate the Jan. 6 attack on the U.S. Capitol.

They joined with 33 of their House colleagues in supporting the measure; former President Donald Trump has branded the commission proposal a "Democrat trap."

Womack and Hill voted both times against impeaching the 45th president, most recently on charges of incitement of insurrection. But they also voted to certify the Nov. 3 election returns, despite attempts by Trump and some of his allies to overturn the results.

Neither of them spoke during Wednesday's debate.

In written statements explaining their votes, they made no mention of the former president, instead portraying the investigation as an opportunity to learn more about House Speaker Nancy Pelosi's handling of her duties.

"In the days following January 6th, I called for a bipartisan commission to review the incident that occurred at our U.S. Capitol," Hill said, noting that he had co-sponsored legislation, early on, to create one.

"I want answers from Speaker Pelosi on the lack of adequate security in the U.S. Capitol during that day. More importantly, understanding the events of January 6th is critical so that the instances of heroism can be recognized, and the errors made will never be repeated," Hill added.

Womack said Americans "deserve to know the truth behind the events of January 6th."

"Many unanswered questions remain -- not the least of which are decisions out of the Speaker's office regarding actionable intelligence apparently ignored prior to the event. We need those answers," he said.

"The insurrection was a black eye on America, and every effort must be made to ensure an event like this never happens again," Womack said.

The committee structure worked out between U.S. Reps. John Katko, R-N.Y., and Bennie Thompson, D-Miss., is "fair, transparent, and affords no side an advantage," he said.

Like their colleagues, Westerman and Crawford issued written statements Wednesday evening explaining their votes; neither debated the measure on the House floor.

Westerman, who opposed impeachment but voted to accept the 2020 election returns, said Jan. 6 was "a day of tragedy for the American people and for the members, staff, and law enforcement involved."

"Thorough investigations" have already been launched on Capitol Hill and by law enforcement authorities that will help "ensure all Americans have the truth of what happened that day," he said.

"We all deserve answers," he said. "Another taxpayer-funded investigation would only duplicate the important efforts already taking place."

Crawford, who voted to challenge the election returns from Pennsylvania and Arizona, portrayed the legislation as flawed.

"Since January, I have called for a bipartisan commission to investigate the violent attack that occurred at our Capitol and the seemingly increasing normalization of political violence in our country. Because the January 6 attack did not occur in a vacuum, this legislation should be modified to ensure that all domestic terrorism is investigated -- including the 2017 attempted mass murder of GOP lawmakers a few miles from the Capitol and this year's fatal Good Friday attack on the Capitol Police -- so we can get a handle on the scope of domestic terrorism and do what's needed to prevent it in the future," he said.

The legislation has been criticized by Arkansas' two Republican U.S. senators.

"There are multiple investigations already underway, within Congress and by law enforcement agencies, into the events of January 6th," said John Boozman of Rogers in a written statement. "If the objective is to get to the truth and prevent a repeat of this clear security failure, I am confident we can do that using our existing authority in Congress and with the support of the Department of Justice."

Like Boozman, Tom Cotton of Little Rock questioned the need for additional investigations.

"This duplicative, partisan commission isn't designed to uncover new information, but rather to advance the Democrats' partisan goals," he said in a written statement.