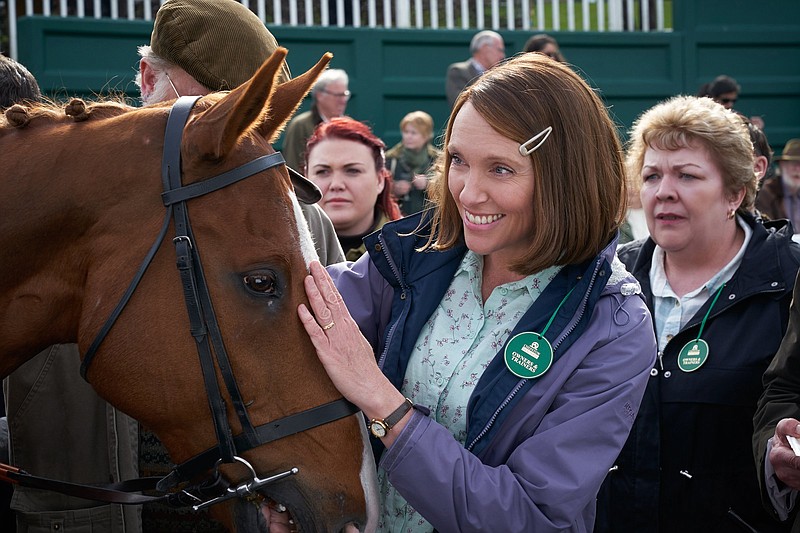 Growing up in the South, it seemed like every class had a girl obsessed with horses. She had them on her backpack. She drew them in her notebook. Maybe she even took riding lessons in her spare time.

I was not that girl. I was the girl in class obsessed with wolves (still am). For the record, I do not like horses. They're giant, loud and can trample me to death without even a shred of remorse. In short: They freak me out.

And I care for sports movies about as much as I do for horses. So imagine my surprise when I'm in the middle of "Dream Horse," laughing and crying and yearning for victory. The movie is a gem, though far from an expected one.

I realize, with some irony, I've been on a horse kick lately. Last month, I reviewed "Concrete Cowboy." This month, I've got "Dream Horse," and in June I plan on asking Netflix for a review copy of its reboot of "Spirit: Stallion of the Cimarron."

"Dream Horse" is apparently based on a real story, which surprised me right out of the gate (OK, I'll stop). It tells the story of folks in a small Welsh village who chip in to breed a racehorse. The horse's name is Dream Alliance.

It sounds like a standard story, and that's because it is. The movie offers very little in the way of twists and turns. But what makes it so great are the performances and pacing that had me crying on the edge of my seat at 12 a.m. on a Sunday.

The main character is a ­cashier named Jan, played by Toni Collette. She's the heart and soul of this movie -- the eyes you look through to see folks who take a gamble at being happy and find a spark in life.

"Dream Horse" wastes no time showing Jan is in a dead-end job. She works hard, has a few animals, a husband who mostly sits at home and watches television due to his arthritis, some unappreciative parents to care for, and a generally suffocating life that offers little joy. But after meeting a man at the bar who knows his stuff about racehorses and staring at childhood photos of her raising pigeons and other small animals, Jan hatches a wild idea to breed a racehorse.

The film takes its time showing each difficult step in the process. There's not a single shortcut to be found for Jan. She has to buy a mare, breed her, convince around 20 townsfolk to chip in a set amount of cash per week, raise the horse, get it trained, and maybe it'll get to race someday.

I enjoyed the determined pace of "Dream Horse," trodding forward through the story.

There's not a single bad actor in the entire cast. Opposite of Collette is Owen Teale playing her husband. I wrestled with liking him seeing as he killed Jon Snow, but he displays the life Dream Alliance brings to the town just as much as anyone else. Once he starts taking care of the horse, you really don't see him in front of the TV anymore. He's building a shelter for his new pony and driving Dream Alliance here and there.

And behind them both the film offers these funny little background characters, just odd folks from the town, like a butcher who pays her accountant in meat, an older lady whose diet seems to be at least 60% candy eggs, the town drunk and more. They embody a community rallied around this horse that they've all chosen to invest in.

"Dream Horse" has this great scene where you get to see each member of the group setting aside their weekly cash for Dream Alliance. The town drunk is putting coins into jars labeled "food" and "Dream." The candy egg lady keeps her Dream allowance in envelopes. I was enamoured by how well the movie establishes a sense of camaraderie among people who really don't know diddly about raising horses.

When Dream Alliance leaves the town to go live with a professional trainer, you can see how sad each member of the group is, and you get a sense that they really love their damn horse. But when it's time for the first race, the entire group charters a bus, and I got so tickled watching all these yokels crowd into a club room with the elites at the horse track.

And let me take a second to brag on the movie's humor, which is so offbeat. Every time I would laugh at something in "Dream Horse," the comedy snuck up on me. It was usually from a silly moment I didn't see coming. When they're in the fancy club at the race track, one of the townsfolk says, "There's a rumor Mick Jagger is here." Another says, "I just had a pee next to Andrew Lloyd Webber!" It's great stuff.

The races (which make up a solid third of the movie) are so intense. And they scale up in intensity as the movie continues. During the second race, I found myself leaning over the coffee table, hands clenched, hissing, "Come on. Come on!" rooting for Dream Alliance.

At some point, Dream Alliance is badly injured, and Collette being such a great actor, had me bawling my eyes out any time she cried on screen. I was dead convinced she loved that animal and would give anything to protect him.

Some things in the movie I just had to nod along with. Whenever people made bets in pounds sterling, I assumed it was a lot, and when a woman sang before the final horse race, I assumed it was the Welsh national anthem. Darn ignorant Americans. We're just the worst.

One of the things I really appreciated in "Dream Horse" was the lack of an obvious antagonist. In most movies like this, the script writers would throw in some evil rich horse owner who tried to sabotage Dream Alliance or disqualify him. It was a big relief to just have a simple movie about a town and its horse.

I really only have two complaints with the film, and one is technical. My review copy didn't come with captions, so it took my ear a good 10-15 minutes to adjust to the thick Welsh accents and figure out what people were saying. If you're like me, and you always have captions enabled because you read better than you listen, this is definitely a movie to have them on for.

The only other problem I had is with Jan's parents. Her dad's kind of a grumpy bastard, and there was clearly some tension between him and Jan's husband. But none of this family's relationships is really fleshed out. At one point, a family member dies, and I remember thinking, "Is this really vital to the story? Was I supposed to care about that character?" I feel like the scenes with Jan's parents could have been cut, and nothing of value would have been lost.

I have a sneaking suspicion "Dream Horse" wanted Jan to have a similar arc with her father like Shia LaBeouf did with his dad in "The Greatest Game Ever Played," but the legwork and investment just weren't there. I'd rather that plotline be cut.

It's difficult for me to come up with any other problems with the film. "Dream Horse" is a quirky gem filled with fun energy and great tension.

The movie isn't getting a huge sweeping release, but a couple of Arkansas theaters have picked it up as of Monday afternoon. If yours happens to be one of them, "Dream Horse" is worth buying a ticket for.