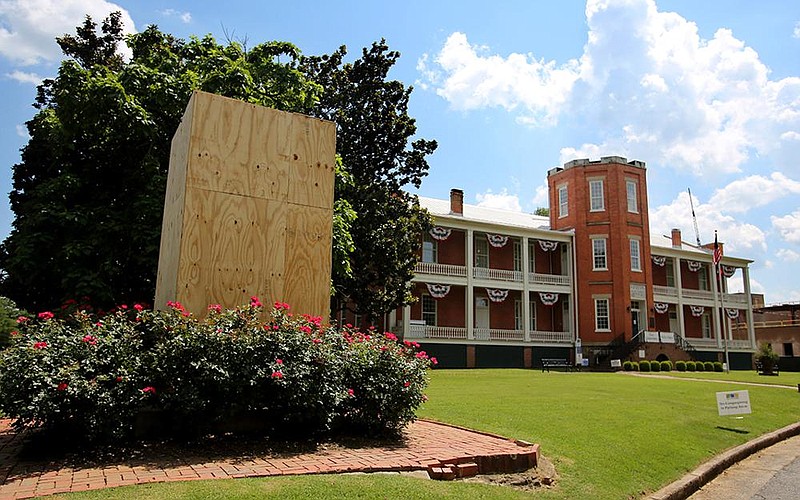 The Confederate monument outside the MacArthur Museum of Arkansas Military History in Little Rock was removed on Thursday, June 18, 2020, and the statue's pedestal has been boarded up after it was vandalized. See more photos at arkansasonline.com/619statue/ (Arkansas Democrat-Gazette/Thomas Metthe)

Little Rock City Attorney Tom Carpenter pushed back on a demand from a Fort Smith attorney this week that Confederate markers be returned to the area of MacArthur Park, according to an email exchange.

Attorney Joey McCutchen, who represents two Arkansas chapters of Confederate heritage groups, told Carpenter on Wednesday that he plans to seek an injunction if the city does not return three markers that were removed from the vicinity of the MacArthur Museum of Arkansas Military History last summer.

The three items commemorating the Confederacy were a statue depicting a Confederate soldier known as the "Memorial to Company A, Capitol Guards"; a bench inscribed in honor of Arkansas youths who supported the secessionist cause; and a granite block memorializing David O. Dodd, a 17-year-old whom it referred to as "the Boy Hero of the Confederacy."

However, in an email to McCutchen on Wednesday evening, Carpenter wrote, "The property in question does not seem to meet the definition of public property. While the City is in control of the property, it was through a transaction with the federal government, not the State government."

Furthermore, he said a recent act of the Arkansas Legislature that barred the removal of such monuments did not apply because the markers had already been removed by the effective date of the act. The bill was signed into law in April, whereas the three markers were removed last summer.

Carpenter also disputed the constitutionality of the underlying legislation.

He wrote, "All of these questions arise before the uncompensated taking of property rights by the State arises: an action for which the State does not have immunity[.] To that end, the statute does not appear to be constitutional under the Arkansas, nor the United States, constitutions."

In what appears to be a retroactive provision, language in the act says the law applies to monuments "not currently displayed" by a public entity. But Carpenter wrote, "Even with the subsection which tries to make an existing, but not displayed, monument subject to the statute, after the fact, still suffers as a Takings."

According to the email exchange, Carpenter told McCutchen that the base of the soldier statue -- initially left in place after the city removed the bronze -- was removed earlier this month.

He attributed its removal to planned repairs after damage to the base last summer, when it was apparently vandalized with some kind of paint or varnish.

Carpenter wrote that he learned of the removal Wednesday.

"I know that the Museum had been working to find an appropriate craftsperson to make the repair," he wrote.

He told McCutchen he would take his demand to the city board "for further discussion."

"If you wish to file an illegal exaction case I cannot stop you," Carpenter wrote. "Unfortunately, I am not authorized to accept service for the City or I would offer to do so. However, the Mayor and the City Manager are both, independently, able to accept service."

Carpenter's reply to McCutchen was first reported by the Arkansas Times on Thursday.

When asked about Carpenter's constitutionality argument, McCutchen suggested the city attorney's rebuttal did not apply.

"Mr. Carpenter continues to 'squirt ink in the water' when he says Act 1003 is unconstitutional to cover his client's continued violations of local and state laws," McCutchen wrote in an email to the Arkansas Democrat-Gazette on Thursday.

"There is a presumption that laws of the state are constitutional. Secondly, the law is not a 'taking of property' but is clearly intended to preserve and protect property," he added. "The City of Little Rock apparently thinks they are above the law."

McCutchen argued the city violated the state law again by removing the base of the "Capitol Guards" monument May 3.

"The Robert C. Newton Camp of the Sons of Confederate Veterans intends to pursue criminal charges against those responsible for this violation of Act 1003, as well pursue any and all civil remedies," he wrote.

In an interview Wednesday, McCutchen said he did not have a set time frame for when he might file suit against the city.

At the time the "Capitol Guards" statue was removed last year, Little Rock Mayor Frank Scott Jr. in a statement called the monument "divisive and in opposition to this administration's internal why -- to unite Little Rock." The bench and block were removed shortly thereafter.

Scott and his representatives did not respond to a request for comment Thursday.