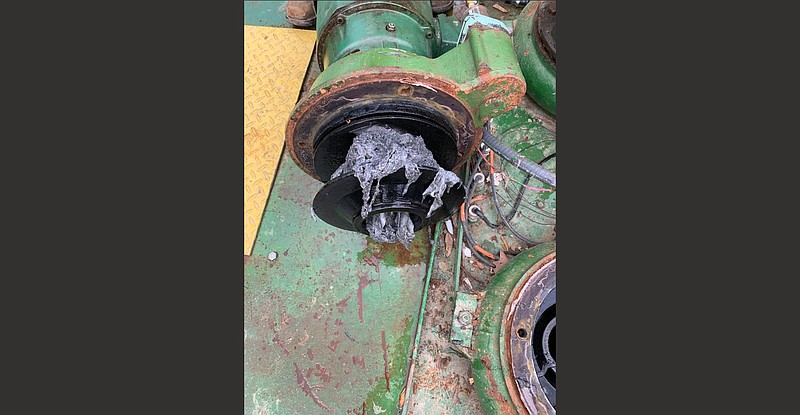 Sanitary wipes that are getting flushed down toilets are clogging up and damaging the Pine Bluff wastewater system, officials say. This photo shows a jammed impeller, a device that regulates water flow. (Special to The Commercial)

While they do disappear down the drain when flushed, that's when the problems start.

According to Ken Johnson, general manager of the Pine Bluff Wastewater Utility, these wipes are made with synthetic materials that won't break down and end up clogging the sewers, which has become an escalated problem in Pine Bluff since the coronavirus pandemic.

Johnson said these practices create hazardous conditions and considerable expense, and he is pleading for Pine Bluff to stop flushing wipes. The reason, he said, is because sewer systems were designed to handle two things -- human waste and toilet paper.

The city has already spent several thousands of dollars to address damage and clear the pipes.

"A pump replacement is about $30,000 and we have already replaced at least two pumps," said Johnson. "Our pumping equipment, screens and other infrastructure, those wipes clog up the pumps. "Some of those pumps cost above $50,000 and the screens cost around $500,000."

The wipes accumulate around an impeller, a device that is designed to propel water at a proper flow. The wipes have become such a heavy load on the impellers for Pine Bluff Wastewater that the impellers are breaking and getting jammed causing the system to become clogged, he said.

The problem will more than likely become a pipe nightmare for the consumer as a result.

"If they continue to do that at their homes, there's a possibility their service line can become stopped up because of these wipes," said Johnson.

Johnson said this has become a national problem that doesn't come cheap to fix for any public utilities. Some cities are even having to raise fees, Johnson said.

The last thing anyone wants are clogged sewers overflowing into the streets or backing up into homes, he said.

"Wipes are not flushable, so they need to go to the trash bin," said Johnson. "As far as paper products--toilet tissue is just about the only thing you can put safely down the commode."