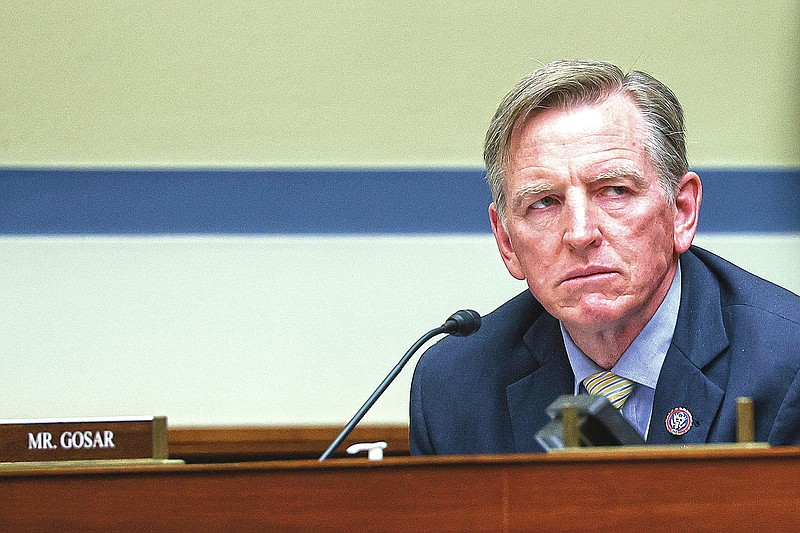 Rep. Paul Gosar, R-Ariz., listens during a House Oversight and Reform Committee regarding the on Jan. 6 attack on the U.S. Capitol, on Capitol Hill in Washington, Wednesday, May 12, 2021. (Jonathan Ernst/Pool via AP)

Flouting all evidence and their own first-hand experience, a small but growing number of Republican lawmakers are propagating a false portrayal of the Jan. 6 attack on the Capitol, brazenly arguing the rioters who used flagpoles as weapons, brutally beat police officers and chanted they wanted to hang Vice President Mike Pence were somehow acting peacefully in their violent bid to overturn Joe Biden's election.

One Republican at a hearing Wednesday called the rioters a "mob of misfits." Another compared them to tourists. And a third suggested the sweeping federal investigation into the riot -- which has yielded more than 400 arrests and counting -- amounts to a national campaign of harassment.

It's a turn of events House Speaker Nancy Pelosi, another target of the rioters, called "appalling" and "sick," and it raises the possibility the public's understanding of the worst domestic attack on Congress in 200 years -- an attack that was captured extensively on video -- could become distorted by the same kinds of disinformation fueling former President Donald Trump's false claims of a stolen election.

"I don't know of a normal day around here when people are threatening to hang the vice president of the United States or shoot the speaker, or injure so many police officers," said Pelosi, who has pushed for a bipartisan commission to investigate the riots.

The hearing Wednesday was supposed to be the latest dive by congressional investigators into the chaos of Jan. 6 -- the missed warning signs, confusion and delays allowing the rioters to terrorize the Capitol for an entire afternoon. But several Republicans used their rounds of questioning not to pepper the witnesses with questions but to downplay the brutal assault on America's seat of democracy.

"Let's be honest with the American people -- it was not an insurrection, and we cannot call it that and be truthful," said Rep. Andrew Clyde, a Republican from Georgia serving his first term.

Clyde said one video feed of the rioters looked like they were on a "normal tourist visit." Those in the video, taken in Statuary Hall, were able to enter the building after rioters broke through glass, pummeled officers and busted through the doors as lawmakers were frantically evacuated. They were headed to the House chamber where they tried to beat down the doors with lawmakers still inside.

Clyde wasn't the only Republican making that argument.

Arizona Rep. Paul Gosar portrayed a woman who was shot and killed by Capitol Police as she tried to break through a door next to the House chamber as a martyr. He said Ashli Babbitt was "executed" and noted she was an Air Force veteran who was wearing an American flag. The Department of Justice decided after an investigation not to charge the police officer who shot her.

The Justice Department, Gosar said, is "harassing peaceful patriots across the country" as federal prosecutors file charges against hundreds of people who stormed the Capitol and participated in the riot. The massive investigation, one of the largest in American history, remains ongoing with federal agents continuing to serve search warrants and attempting to locate dozens of other people still being sought for questioning.

Georgia Rep. Jody Hice also painted the rioters as the victims, noting they were four of the people who died, including Babbitt. The other three suffered medical emergencies while part of the crowd laying siege to the Capitol. "It was Trump supporters who lost their lives that day, not Trump supporters who were taking the lives of others," Hice said.

A fifth person, Capitol Police Officer Brian Sicknick, collapsed immediately after the insurrection and died the next day. Video shows two men spraying him and another officer with a chemical, but the Washington medical examiner said Sicknick suffered a stroke and died from natural causes. The men have been charged with assaulting the officers.

Two other officers took their own lives in the days afterward, and dozens more were hurt -- including one officer who had a heart attack and others who suffered traumatic brain injuries and permanent disabilities. The union that represents the Capitol Police said some of the officers may never return to work.

The attempt to defend the insurrectionists came on the same day House Republicans voted to oust Wyoming Rep. Liz Cheney from their leadership team for repeatedly rebuking Trump for his false claims the election was stolen.

Cheney voted with Democrats to impeach Trump for telling his supporters hours before the Jan. 6 attack to "fight like hell" to overturn Biden's win. Trump's lies about widespread election fraud were rebuked by numerous courts, election officials across the country and his own attorney general.

Maryland Rep. Jamie Raskin, who led the Democrats' impeachment prosecution and sits on the Oversight Committee, said after the hearing he believes Republicans were "emboldened and emancipated" by Cheney's ouster earlier in the day.

"They have declared themselves to be on the side of Donald Trump and the 'big lie,' and the 'big lie' now has spread outwards to include denial of what happened on Jan. 6," Raskin said.

Timothy Naftali, a professor of history and public service at New York University, says it's "deeply cynical" to set aside the insurrection as if it didn't happen. He compares it to political elites in Southern states after the Civil War who failed to examine its causes, which he says prevented racial reconciliation and healing and still affects the country to this day.

Given the extensive record of the attack, captured in video and photos seen the world over, defending the insurrectionists required some creative omissions. One point Clyde emphasized was the rioters never made it to the House floor -- even though they tried, only to be held back by police officers with guns drawn. Some lawmakers were taking cover in the gallery of the chamber as they tried to beat down the doors.

"I can tell you the House floor was never breached and it was not an insurrection," Clyde said. "This is the truth."

The mob did break into the Senate minutes after senators had evacuated, some carrying zip ties and tactical equipment. They rifled through desks and hunted for lawmakers, yelling "where are they?" They walked into Pelosi's office, stealing a laptop and calling out her name while some of her staff huddled quietly under furniture.

Other Republicans -- some quietly, some publicly -- have made clear they don't agree with their colleagues.

"I was there," said Utah Sen. Mitt Romney, who was caught in security video being diverted away from the rioters by a police officer. "What happened was a violent effort to interfere with and prevent the constitutional order of installing a new president. And as such, it was an insurrection against the Constitution. It resulted in severe property damage, severe injuries and death."

Illinois Rep. Mike Quigley, another Democratic member of the Oversight panel, says the Republican denials are wishful thinking that reverberates with their most partisan voters.

"These folks passionately want what they want to be true," Quigley said after the hearing. "So it's no longer I'll believe it when I see it. It's I'll see it when I believe it." 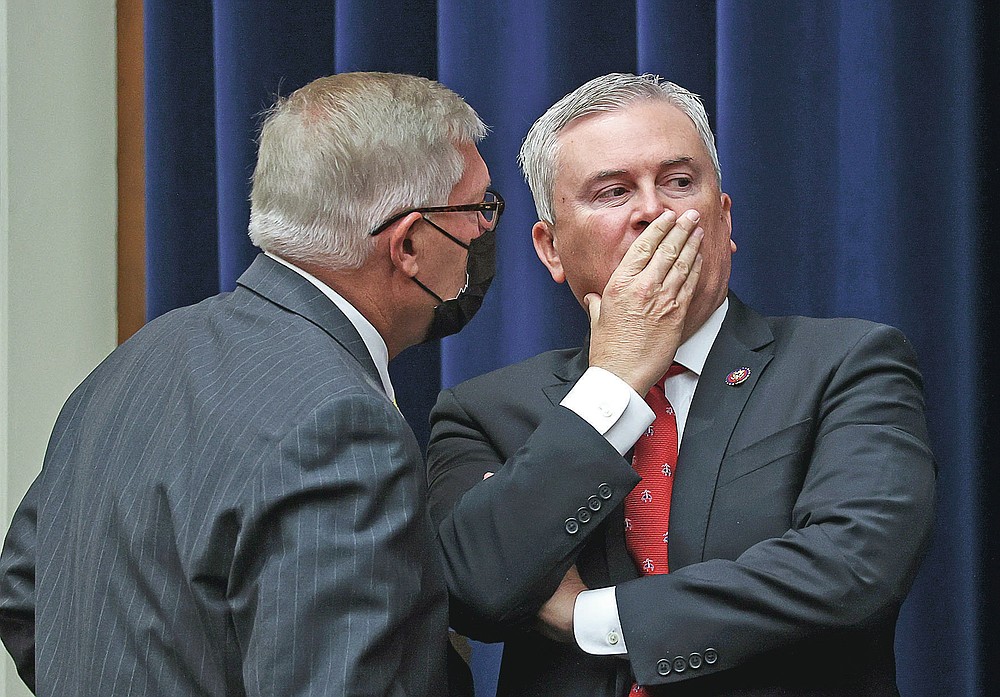 Rep. Paul Gosar, R-Ariz., speaks with Reform Committee Ranking Member James Comer, R-Ky., listens during a House Oversight and Reform Committee regarding the on Jan. 6 attack on the U.S. Capitol, on Capitol Hill in Washington, Wednesday, May 12, 2021. (Jonathan Ernst/Pool via AP) 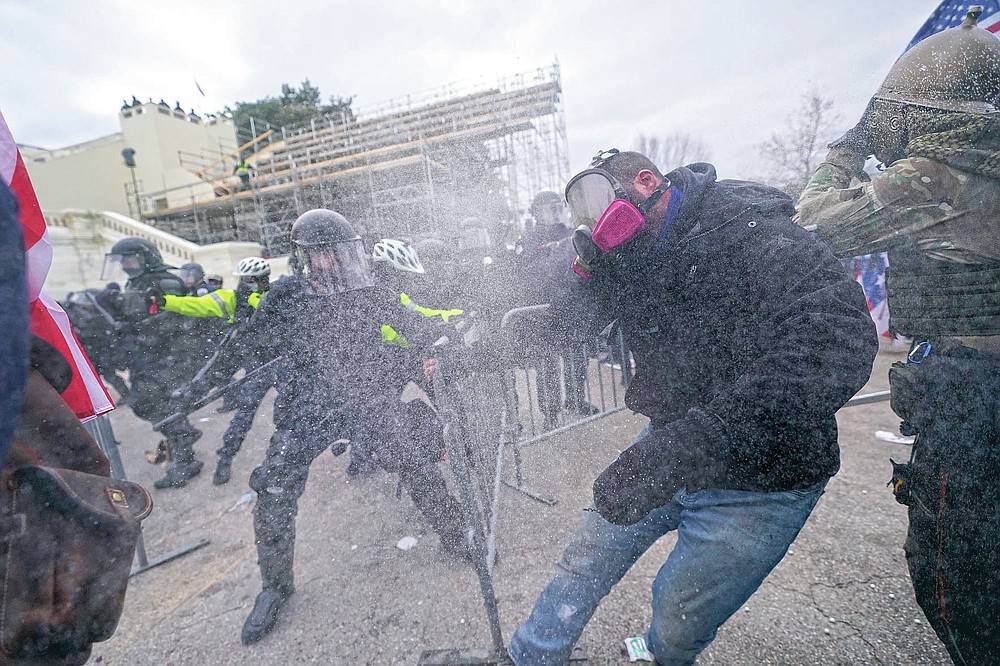 FILE - In this Jan. 6, 2021, file photo, supporters of then-President Donald Trump try to break through a police barrier at the Capitol in Washington. (AP Photo/Julio Cortez, File) 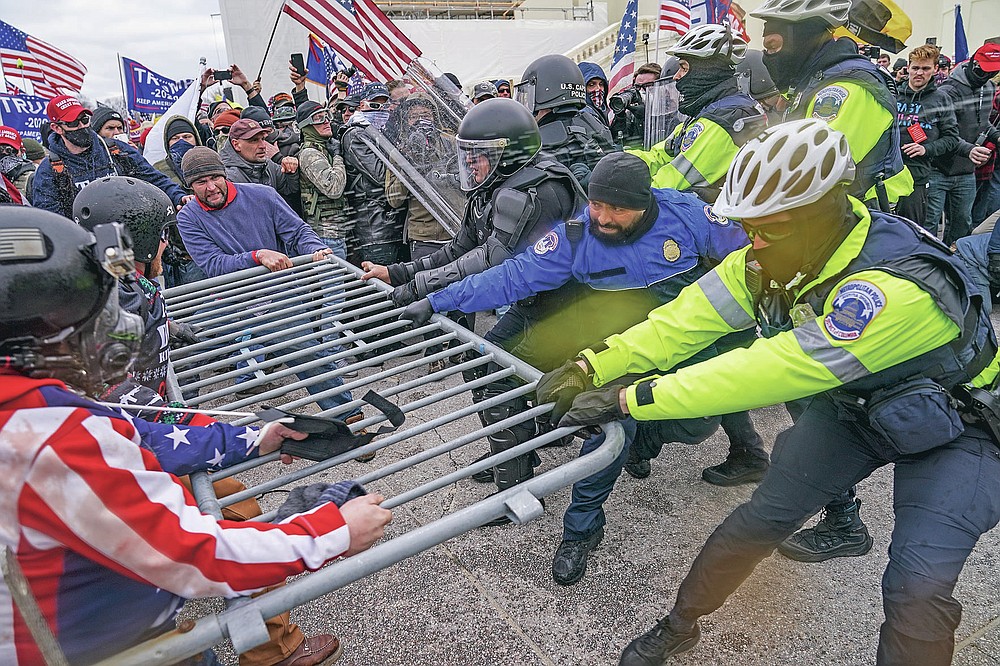 FILE - In this Jan. 6, 2021, file photo, supporters of then-President Donald Trump try to break through a police barrier, at the Capitol in Washington. (AP Photo/John Minchillo, File) 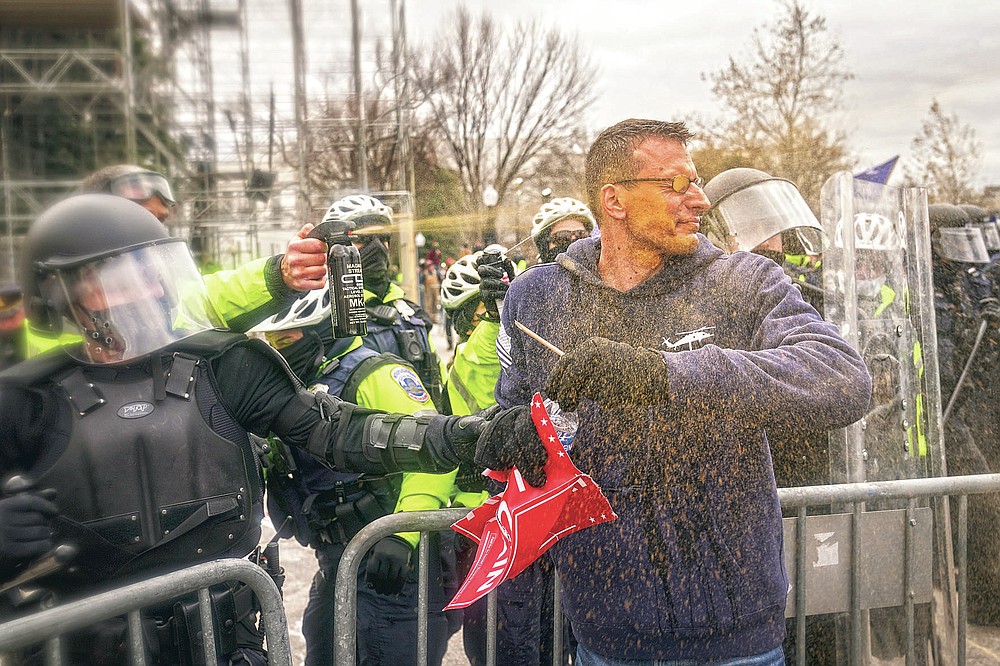 FILE - In this Jan. 6, 2021, file photo, rioters try to break through a police barrier at the Capitol in Washington. (AP Photo/John Minchillo, File) 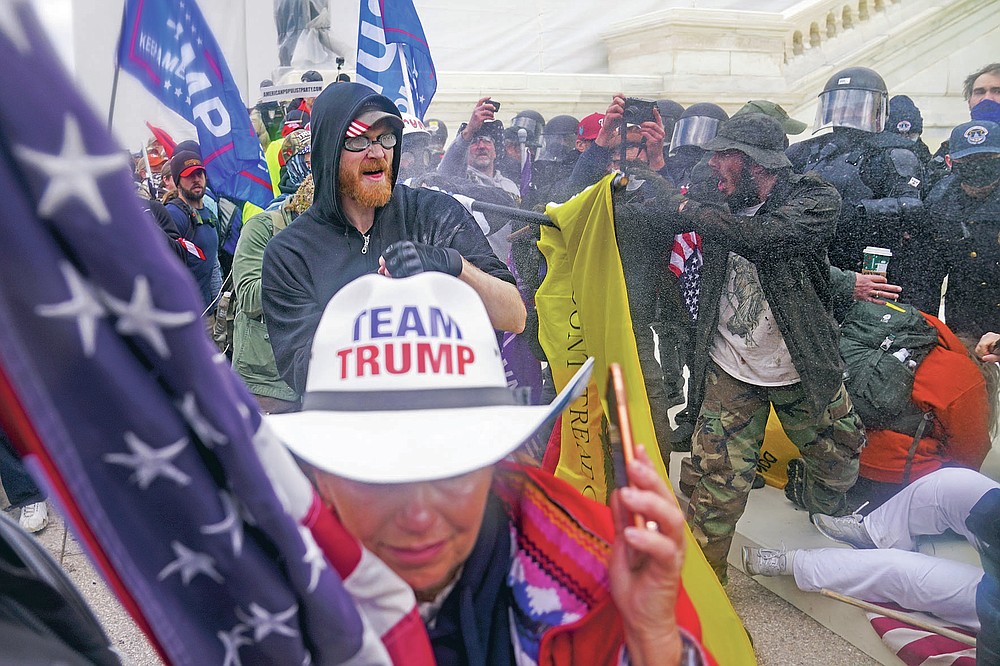 FILE - In this Jan. 6, 2021, file photo, rioters try to break through a police barrier, at the Capitol in Washington. (AP Photo/John Minchillo, File) 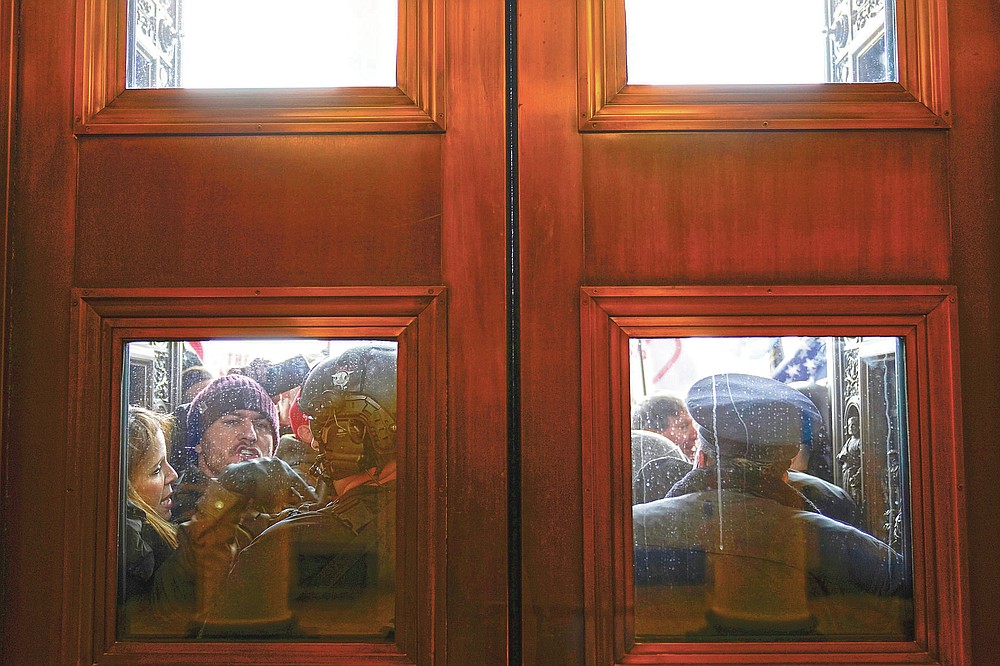 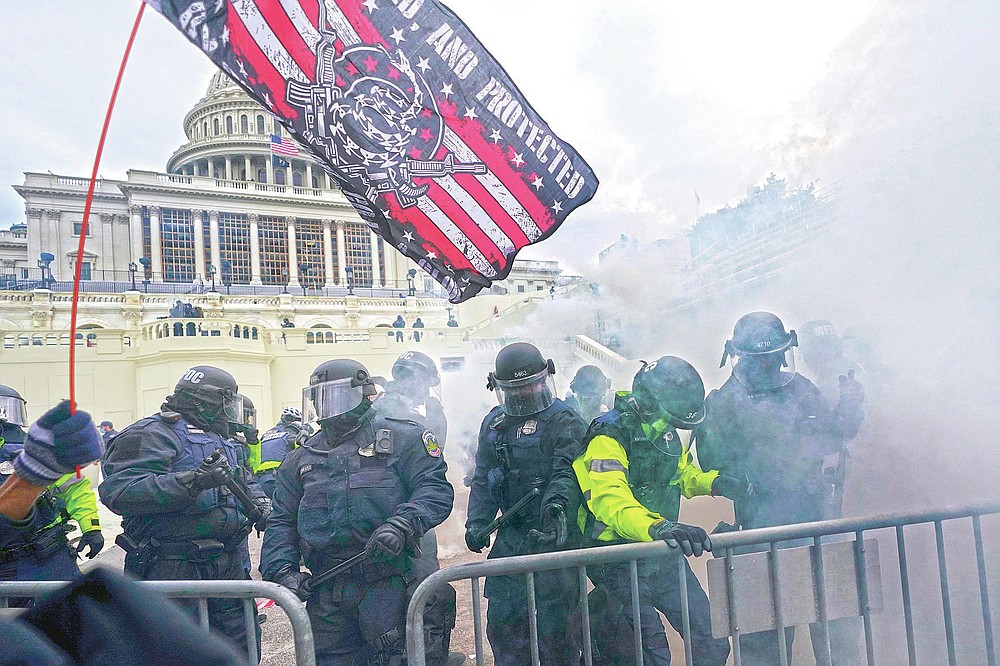 FILE - In this Jan. 6, 2021, file photo, police try to hold off supporters of then-President Donald Trump who tried to break through a police barrier, at the Capitol in Washington. (AP Photo/Julio Cortez, File) 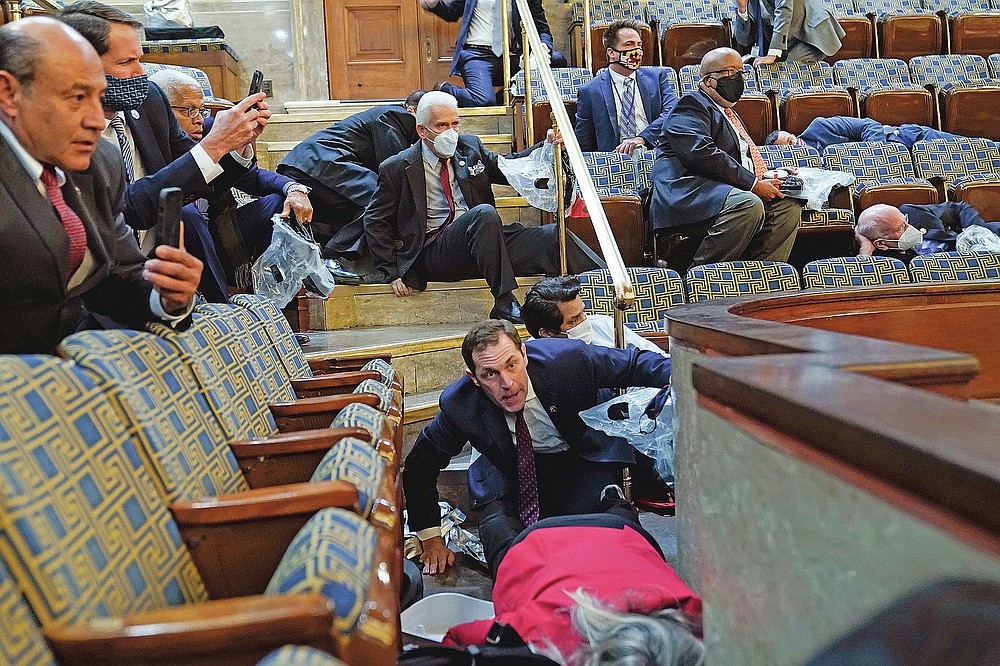 FILE - In this Jan. 6, 2021, file photo, people shelter in the House chamber as rioters try to break into the House Chamber at the U.S. Capitol in Washington. (AP Photo/Andrew Harnik, File) 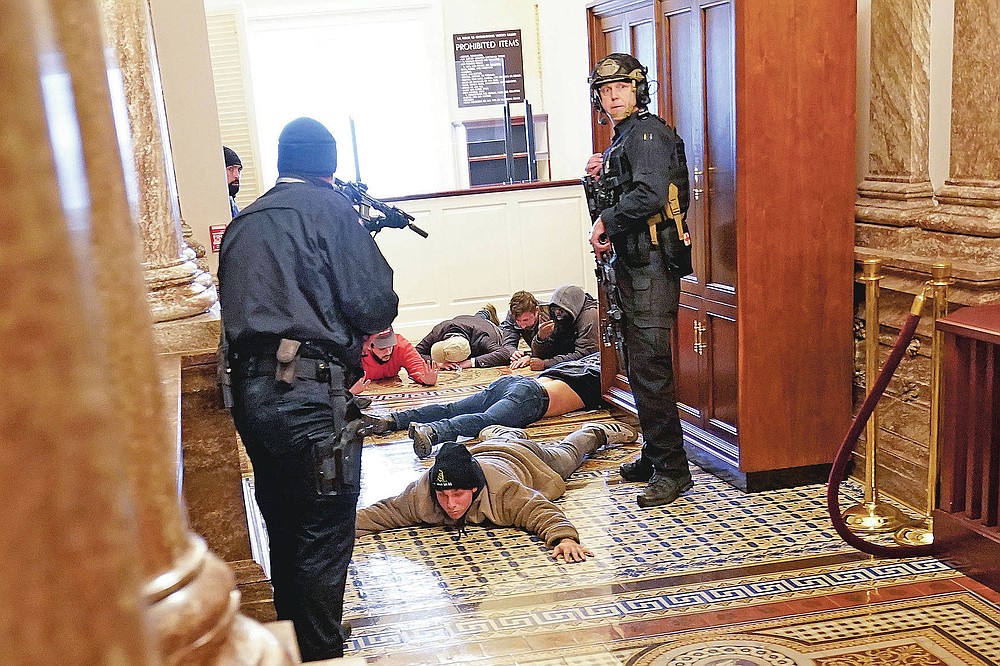 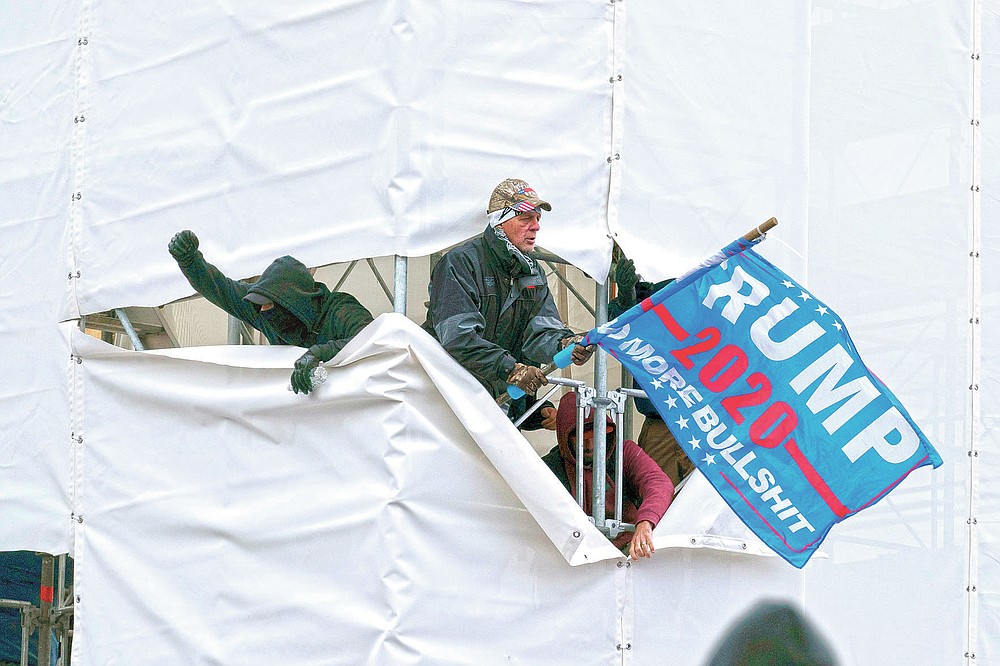 FILE - In this Jan. 6, 2021, file photo, supporters of then-President Donald Trump are seen outside the Capitol in Washington. (AP Photo/Jose Luis Magana, File) 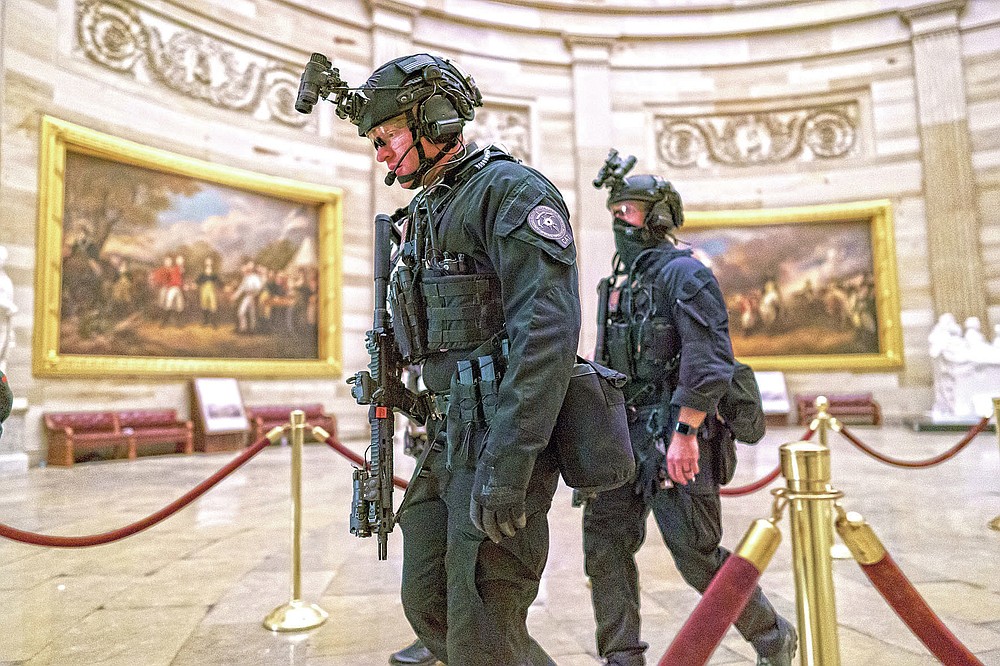