$4.3B casino soon to show its hand 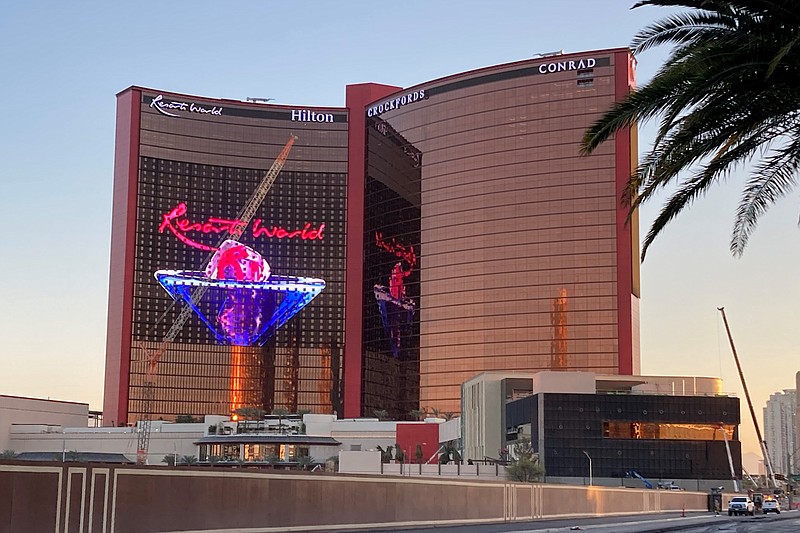 Resorts World Las Vegas is seen on Las Vegas Boulevard on Thursday, May 20, 2021. The Nevada Gaming Commission granted licenses to the resort and its Malaysia-based parent company, Genting Berhad PTC, for one of the biggest casino projects ever on the Las Vegas Strip. The $4.3 billion resort is due to open June 24. (AP Photo/Ken Ritter)

With praise for the $4.3 billion development and the boost it could provide in a pandemic-battered economy, the Nevada Gaming Commission granted licenses to Genting Group, based in Kuala Lumpur, and its publicly traded subsidiary, Genting Malaysia Berhad.

"We look forward to seeing it open and running," Commission Chairman John Moran Jr. said after the unanimous vote.

Scott Sibella, president of Resorts World Las Vegas, said the project six years in construction was being completed "on time and on budget."

"We want to be the most sophisticated, state-of-art casino in the world," Sibella declared as he spoke about technological advances built into what will be the first new resort to open in more than a decade on the Strip.

It will incorporate natural outdoor light in many restaurant and convention areas and a ventilation system Sibella said was designed to produce "the best air quality money can buy."

By videoconference, Genting Chairman Kok Thay Lim traced the company history to his father opening a first Resorts World-branded resort, a 200-room hotel in 1971 in Pahang, Malaysia. The company now has properties in Malaysia, Singapore, Hong Kong, China, the Philippines and United Kingdom.

The Las Vegas resort will be its biggest in the U.S., where Resorts World operates a casino at Aqueduct Racetrack in the New York borough of Queens and is scheduled to open an 18-story casino hotel called Resorts World Catskills later this year in Monticello, N.Y., about 100 miles northwest of New York City.

"We are on the cusp of opening our latest Resorts World property with 3,500 hotel rooms," Lim said.

The opening comes as Las Vegas sheds more than a year of person-to-person distancing and mask-wearing rules imposed to slow the spread of covid-19.

Local lawmakers last week approved fully reopening stores, shows and restaurants beginning June 1. That will meet Nevada Gov. Steve Sisolak's goal of allowing 100% capacity at businesses that have reopened in increments after being ordered shut down in March 2020.

The Nevada Gaming Control Board has already approved full occupancy for almost all properties in Las Vegas.

State health officials report that more than one-third of eligible area residents are fully vaccinated against covid-19, and nearly 46% have received at least one shot.

Test positivity, a measure of the number of people who take coronavirus tests that come back positive, was 4.9% in the region on May 20. The World Health Organization goal is 5% or below to relax restrictions.

Sibella said more than 4,000 people will be hired over the next three weeks to fill the resort's workforce of 5,500. Most already have offers, he said, and most are vaccinated against covid-19 and won't have to wear masks.

"I want to commend you on all the work that you've done and the investment that you're putting into the state of Nevada and the Las Vegas economy right now," Commissioner Rosa Solis-Rainey said. "I, too, look forward to seeing your diversity and inclusion efforts. That's important to the community and to the state."

Resorts World is on the site of the former Stardust, a longtime 32-story Las Vegas landmark that closed in 2006 and was imploded in March 2007. The Stardust was the largest hotel in the world when it opened in 1958 with 1,500 rooms. Moran recalled his first jobs there as a restaurant worker and a lifeguard.

The new red, curved 59-story Resorts World will have three Hilton-branded hotels, including 236 upper-floor suites in its exclusive Crockfords gambling and hotel area.

The complex is huge among Strip resorts, on an overall site larger than Allegiant Stadium, which opened last year. Sibella said there is still space to expand on the big 88-acre property.

It has a casino larger than two football fields, gambling salons and poker rooms. It will open dozens of retail shops and stores, more than 40 restaurants and lounges including a "street eats" area, multiple spas and swimming pools, and 300,000 square feet of second-floor meeting and banquet space.

Celine Dion, Carrie Underwood, Katy Perry and Luke Bryan have been announced as headliners beginning in November at the property's 5,000-seat theater, managed by AEG Presents.

Singapore-based Zouk Group will feature DJs including Zedd and Tiesto at the 2,000-capacity Zouk Nightclub and the outdoor AYU Dayclub.