A Black woman's trip across US during pandemic 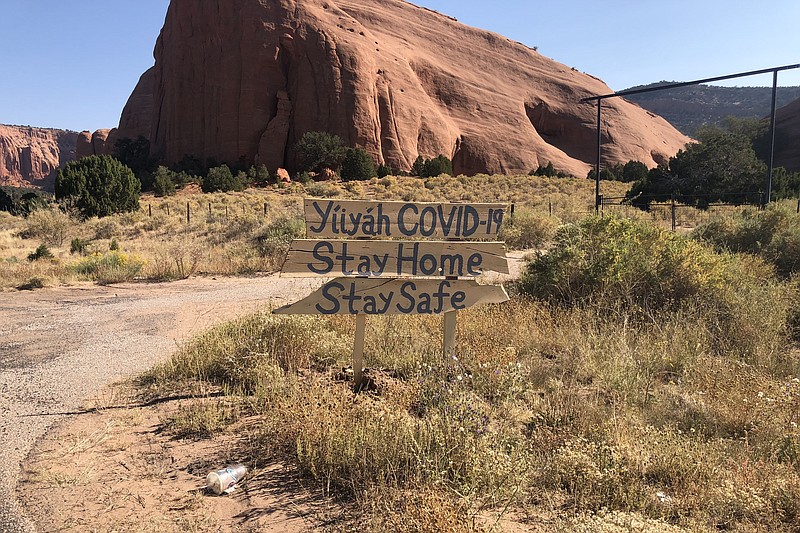 This is a sign Omokha saw on her road trip through Navajo Nation in October. (The Washington Post/Rita Omokha)

Last fall, I set out on a reporting trip across America to document the nation's pulse at that moment in time. 2020 was a year unlike any other in modern history, and I wanted to know how people were coping — especially communities of color, following the murder of George Floyd.

I had a flexible travel plan. I knew I wanted to hit different regions. How that would come together or how many states would be possible was undetermined when I hit the road Sept. 12. In the end, I traveled to 30 states in 32 days. I started in the South, then went to the Midwest and West, hitting Texas, Georgia, Louisiana, Indiana, Minnesota, Washington, California, New Mexico, the Navajo Nation and 14 other states. I wrapped up by driving back East through cities in Arkansas, Tennessee, Mississippi, North Carolina, Pennsylvania and New Hampshire, before heading home to New York.

Driving from state to state alone was not something I ever thought I would do. Still, the moment called for it. The fear of being a Black woman in today's America and embarking on such a journey — going to some predominantly white states — was front of mind, and that feeling was stoked when I was stopped by a white police officer entering Washington, on my way to Seattle.

As I took in the sights and safely interacted with locals, I was mindful of proper covid precautions, and who I am — a Black woman — also influenced my decisions.

I have compiled some practical lessons that helped me on my journey.

◼️ Pack light and for safety.

I had one backpack and an oversize MZ Wallace travel handbag. I packed four athleisure outfits, two broken-in sneakers, one pack of Clorox, two boxes of blue surgical masks, one box of gloves and lots of mini hand sanitizers. I unboxed everything and sealed them in Ziploc bags.

Packing light was not only practical, but also crucial. I didn't want to find myself in the middle of an emergency worrying about some big ol' suitcase.

I'm fearless, most times, but the reality is I was a Black woman on the roads of America by my lonesome. Some of those states were predominantly white, and I didn't know what to expect. Before I hit the road, I shared my location through Apple Maps in my family's group chat — this way, they knew where I was at any given time.

I also made it a habit to check in with them every night, no matter how late. Sometimes I re-sent my exact location when I was in a diner or at a park. If they didn't hear from me in 24 hours, I wanted them to send everyone out to look for me. Apple Maps isn't the only way to share your location with family and friends; I previously used the Life360 app with my mom before we switched over.

Pandemic uncertainties and anxieties are real. Know your risk tolerance and plan accordingly. Every night before hitting my next stops — I sometimes went to three states in one day — I would research the states I was heading to on the Centers for Disease Control and Prevention website and on the respective state's website. I wanted to assess the severity of the virus' spread and read up on the states' travel advisories and guidelines.

Knowing this never changed the fact that I always walked around with a mask and face shield. But it was good to know, for example, if rest areas had changes in their procedures or if contactless tolls were available or which states mandated masks. This prepared me to be extra vigilant in some cities.

I remember reading South Dakota did not require masks the day before I went. When I went to the Navajo Nation, it was useful to know they had a daily curfew and lockdown. Texas' website informed me there was a mask mandate — once in the state, however, it seemed most people took this to be only a suggestion. 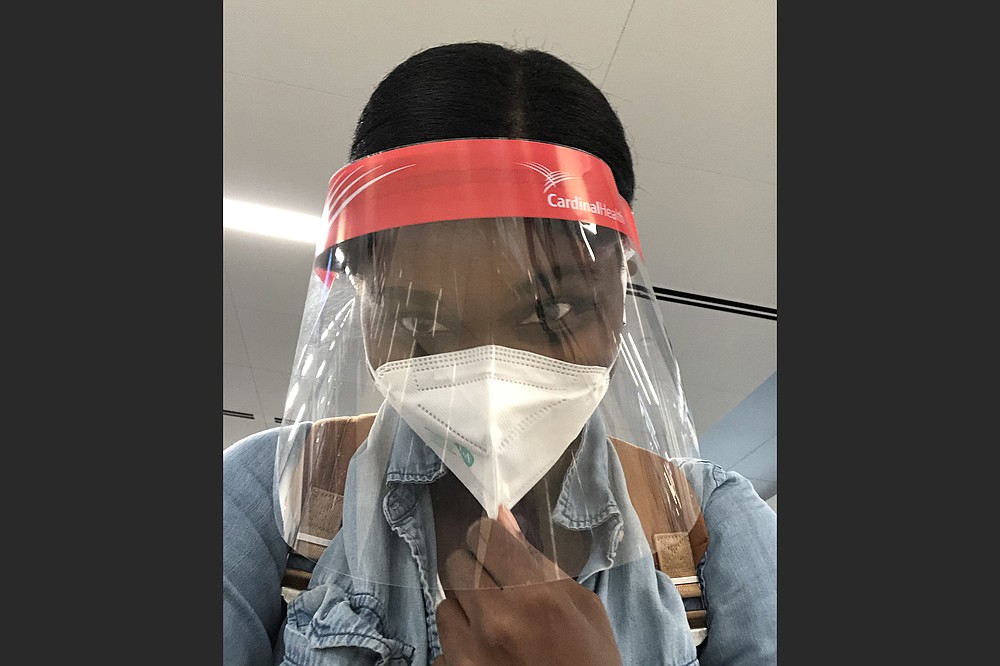 Real talk here: Don't stop at some back-road gas station in the dead of night when there are no other cars around. I knew some small towns I stopped in — such as Stuart, Neb. — had a nearly 100% white population. Pulling into their gas station at midnight could be alarming. Some may look at me and think I'm a threat because I'm Black, or they may have never interacted with a Black person before.

That's why I was obsessive about planning out my subsequent days ahead of time, down to setting a timer in each destination. I'd tell myself: "You only have until 3 p.m. to walk around this town." Once that time went off, I tried my best to hurry back to the car and hit the road.

I never did any overnight driving — it never sat right with me even on the nights I had plenty of energy. I also never walked down any quiet or dark streets at night. After attending a protest in downtown Portland, Ore., it was late, past 10 p.m. Though exhausted from reporting, I waited an extra 30 minutes until I saw a group of people walking in the direction of my hotel, and I walked behind them. In those would-be tense and scary moments, it was critical to rely on my instincts.

◼️ Map out gas stations and hospitals, and take precautions.

Maps are undoubtedly important on any cross-country trip. I discovered that the almighty Google Maps not only allows you to add multiple stops — up to nine destinations — but you can also search nearby gas stations, hotels, rest stops, restaurants, and hospitals and add them to your route. This can be done beforehand or on the road by clicking the magnifying glass, searching for what you need and adding it on as the next stop.

I planned a gas stop roughly every two hours to stretch and see where the map took me, especially on longer drives, which ranged from four to 10 hours at a time. I also pinned the nearest hospital, pharmacy and clinic at every destination where I spent the night. It made me feel a bit more secure knowing where I could go if I needed to see a physician or fill a prescription urgently.

I started with this at every stop. I would go to a coffee shop, a shopping center, a Woodman's Market, and ask anyone which parts of town were still open. I would also always ask: What are some historic places to visit? Where's the closest park? Where's the best place to get a quesadilla?

When I wasn't documenting or interviewing locals, I took in as many historic sites as I safely could. The CDC's website recommended, in part, avoiding poorly ventilated and overcrowded areas, maintaining social distance, and opting for outdoor spaces. Some historic places I went to were the Route 66 Mural Park in Joplin, Mo., Stark Park (where the General John Stark equestrian statue is) in Manchester, N.H., and Greenwood District in Tulsa. 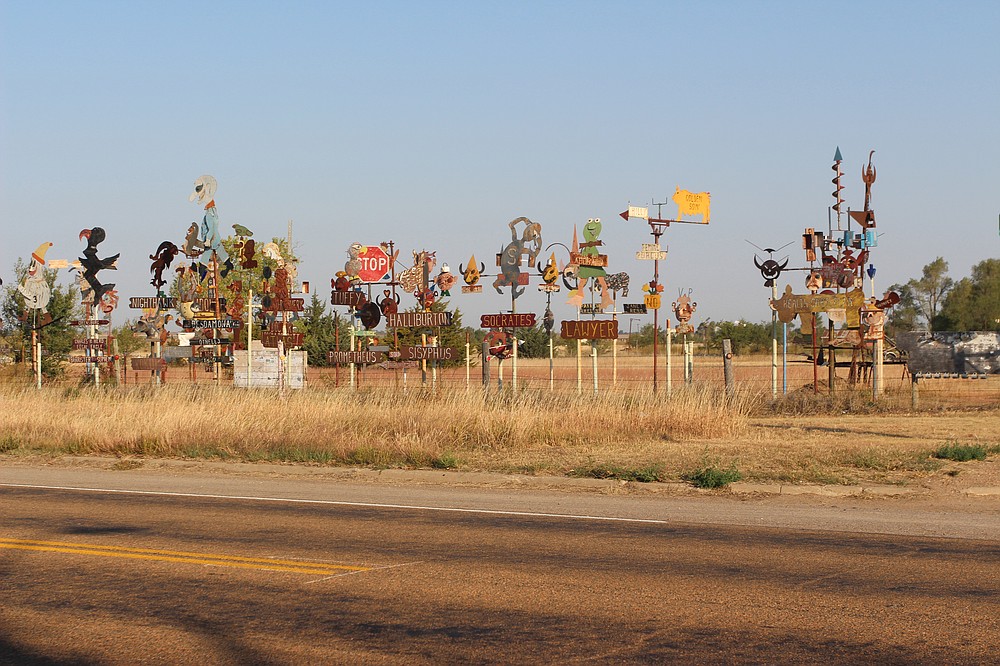 Dodge City, Kan., one of Rita Omokha’s stops on her cross-country road trip in October. (The Washington Post/Rita Omokha)

No matter where my next stop was, I took as many back roads as I could to take in serene sights. At times I just needed to stop to re-calibrate and breathe. In those rural areas, the roads were mostly empty. I especially enjoyed seeing the endless green and brown plains, red barns, center pivots, hay bales, soybean fields and the cows move among themselves. For this city girl, it was quite the sight. I would get out of the car, do my stretches and gawk at them before snapping a couple of pictures.