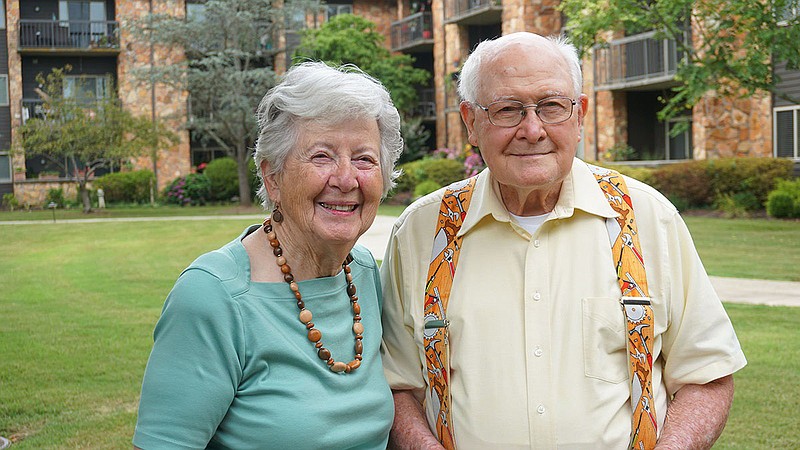 Ardith Winters and Richard Wharry were acquaintances for years, occasionally playing bridge together and seeing each other at church. They were married, and then, over time, each was widowed.

"We didn't really socialize a lot together," Ardith says. "We had played bridge a few times together but as long as they aren't nasty people at the bridge table you don't know much about them."

In 2005, Ardith was working with the care ministry at Highlands Methodist Church in Bella Vista.

"One of my responsibilities was to kind of keep tabs on the congregation and if there was something amiss, to let the pastor know," she says. "I was supposed to not let anybody fall through the cracks."

She noticed one day at church that Richard looked sad.

"I was trying to improve my golf game, so I would go by myself to the golf course and play nine holes, usually on a Friday afternoon," she says.

She knew Richard played golf, too, so she invited him to join her.

"We probably talked as much as we played golf, and by the time we got to the eighth hole, I was thinking to myself, 'This is an enjoyable person. I think I would like to know more about him,'" she says.

He asked her to dinner, and they sat and talked some more, piecing together each other's past and learning about their families.

Ardith grew up in Illinois and had moved to Bella Vista with her late husband after retiring from her career in special education. Richard was originally from Oklahoma, but had lived for a while in Washington and had moved with his late wife to Bella Vista from Texas after he retired from the railroad industry.

They hiked and went out to eat together often, and they played golf. As for which of them is better, Ardith says, "Depends on the day."

Both enjoy playing bridge so they played cards together, too, with a group of Richard's friends.

It didn't take long for them to decide they wanted to spend the rest of their lives together, but Ardith had one pressing matter to resolve before she made a commitment.

Camaraderie was important to them, but it wasn't enough to just find someone who shared interests.

"A group of us gals had become widows," Ardith says.

She and her friends had discussed how important it was that a companion be someone with whom they could continue to do things they enjoyed.

Ardith wanted to travel, and she wasn't sure if Richard would be up for that sort of adventure.

They went to visit their children and talked about their intentions. He remembers Ardith's family asking why they were in a rush to marry.

"We had to consider our children," Richard says. "But we said, 'Well, why wait?'"

They were married on March 24, 2006, at Highlands United Methodist Church in Bella Vista, with about 200 guests in attendance.

Since they married, Ardith and Richard have taken several trips. They have been fossil digging in Wyoming, where they learned about the history of dinosaurs; they joined a Rhodes Scholar trip to the Florida Everglades, where they went hiking and rode on an airboat; and they visited Arizona and Washington, for sightseeing and golf.

In 2009, they moved from Bella Vista to Butterfield Trail Village in Fayetteville.

During the covid-19 pandemic, Ardith and Richard have made 21 quilts to donate to New Beginnings Bridge Housing Community in Fayetteville.

Ardith constructs the quilts, and she says Richard has pitched in to help with various parts of the process.

"He'll do anything that I ask him to do," Ardith says. "He'll help me create a pattern, and if I want it in a different size, he's a good mathematician. He will tie the quilts and he will go pin and unpin, that kind of thing."

Richard elaborates on her statement.

Making the quilts was a way to help others, as well as a way to combat boredom during quarantine, says Ardith, who has been quilting since 1990. She has won several awards for her craft and still creates some quilts on commission.

Richard maintains and sometimes rebuilds the birdhouses at Butterfield Trail Village and works in the gardens there.

It turned out he and Ardith make a good match, Richard says.

"We've been married for 15 years now and it has been good," he says.

She says: “I didn’t know that he would be my spouse. It was at a card game at church.”

He says: “We were in a church-

sponsored bridge marathon, and she and her husband came to our house to play bridge.”

She says: “We had a huge church get-together. They all came because we said it was heavy hors d’oeuvres.”

He says: “It was a blur. She was a part of the congregation and she knew everybody so we had invited the entire church.”

She says: “Be willing to compromise.”

He says: “I always felt that nobody could try to tell somebody how to think or [what to] do.”