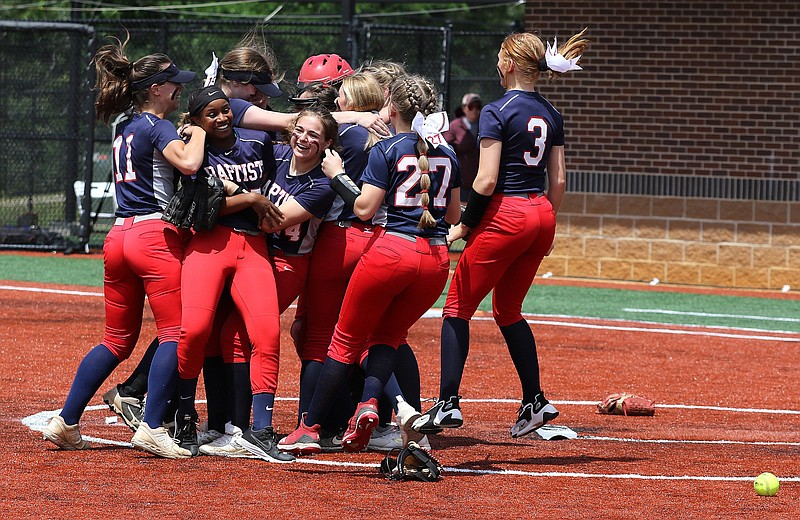 BENTON -- Baptist Prep was running out of time, but the Lady Eagles' confidence never wavered during Saturday morning's Class 3A softball championship game against Hoxie.

"We don't get concerned about that," Baptist Prep Coach Tim Yelvington said of his team, which trailed 1-0 with two outs in the bottom of the fifth. "Because they're going to hit. They hit."

"The third time through, we're going to start hitting," Yelvington said. "That's the way they are. They just like to hit."

Baptist Prep got a little help from Hoxie pitcher Ashten Wallace, who started to tire after holding the Lady Eagles to 1 hit and 3 base runners through 4 innings. Wallace was still in command to start the fifth, even after Karis Turner walked on a 3-2 pitch.

Turner advanced to second on Ellie Bennett's sacrifice bunt, then she tagged up and went to third on Taylor Bornds' high fly to right field.

That's when things got away from Wallace, who threw a wild pitch on a 2-0 count with Macie Welch at the plate, allowing Turner to score the tying run.

Welch walked on four pitches, and Baptist Prep loaded the bases on a double by Mackenzie Childers and a walk to Liv Slayton.

Brown said there was no thought of taking out Wallace.

"She pitched great," Brown said. "Ashtyn's got us here all year long. I wasn't going to change anything up."

"We had one bad inning, and it led to what you saw," Brown said of the eight-run differential at the end.

"We had it. That's what can happen in softball. It kind of snowballed on us. It got away from us."

Midkiff said she had one thing on her mind when she got to the plate.

"I knew I had to get a hit," she said. "We really needed that. I don't even remember the pitch. I was just trying to find the ball and hit it."

Baptist Prep added five more runs in the bottom of the sixth, with Bornds hitting a two-run home run to right center to make it 6-0.

Bornds said the key to hitting Wallace was getting to hit against her multiple times.

"After seeing her so many times, we started to know what pitch she was going to throw first," Bornds said. "She threw me outside first. So I knew it was going to be outside. So I adjusted."

Bornds said she thought the Lady Eagles got into Wallace's head once they started hitting.

"It wasn't stressful, because I knew we'd come back and win because we have all season," Bornds said. "We just believe in ourselves to come back and hit. I knew we would."

Midkiff said there were a few moments of slight stress.

"I think around the fourth inning, when we didn't score, we started to get a little worried," she said. "We knew when we got back up to the top, we would start hitting again."

Which is why Welch, the winning pitcher and the tournament MVP, was relieved by Childers to start the sixth inning. Childers struck out all six Hoxie hitters she faced.

"The difference in our team and theirs is they don't have another pitcher," Yelvington said. "The third time through, we're going to start hitting. That's why we switch."