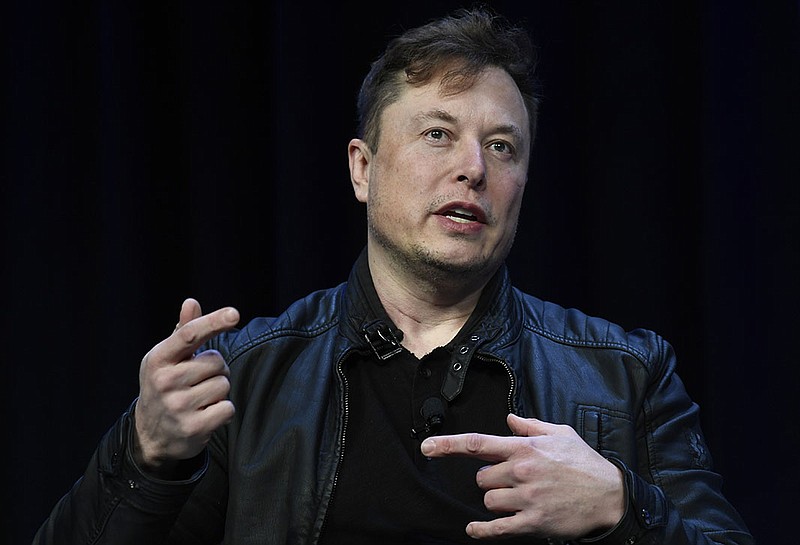 FILE - In this March 9, 2020 file photo, Tesla and SpaceX Chief Executive Officer Elon Musk speaks at the SATELLITE Conference and Exhibition in Washington. Wall Street is gearing up for an avalanche of trading and volatility ahead of Tesla’s entry into the S&P 500 index. Shares in the electric car maker, led by Musk, have skyrocketed by more than 650% this year, bringing the company’s market value to around $600 billion. That makes Tesla the biggest company ever to be added to the S&P 500, and it’s expected to trigger a torrent of trading by institutional investors in the process. (AP Photo/Susan Walsh, File)

WASHINGTON -- In a flyer distributed on Capitol Hill earlier this month, Elon Musk's SpaceX warned that legislation now being considered would reward "Jeff Bezos with a $10 billion sole-source hand-out" that would tie up NASA's moon plans and hand "space leadership to China."

Bezos' Blue Origin space company countered quickly and forcefully: "Lie." "Lie." "Lie," it said of each of the allegations in SpaceX's paper. And added: "What is Elon Musk afraid of ... a little competition?" (Bezos owns The Washington Post.)

The dueling documents are the latest point of tension in a long-simmering rivalry between the world's two wealthiest men and billionaire "space barons" who have sparred on and off for years in their quest to privatize human space exploration. Musk and Bezos have fought over a launch pad at the Kennedy Space Center, battled over a patent on landing rockets and have argued over which of them actually pulled off that feat first.

Musk's SpaceX and Bezos' Amazon also are competing to put thousands of satellites in Earth orbit that could beam internet signals to ground stations.

Now they are warring over another prize -- landing the first astronauts on the lunar surface since the last Apollo mission in 1972.

In April, SpaceX won a coveted NASA contract to build a spacecraft that would ferry NASA astronauts to and from the surface of the moon as part of the space agency's Artemis program. It was a stunning victory, one virtually no one outside of NASA had anticipated, especially since Blue Origin and its "national team" of Lockheed Martin, Northrop Grumman and Draper had finished first in the initial round of contracts. In the final round for the first mission to the moon, however, SpaceX not only beat out Blue Origin but also another bidder, Dynetics, an Alabama defense contractor.

Almost immediately, both losing companies cried foul and filed protests with the Government Accountability Office, arguing the procurement was flawed. But Blue Origin went a step further, lobbying Congress to make the case that NASA should award two contracts for what's known as the Human Landing System.

Sen. Maria Cantwell, D-Wash., the chairwoman of the Commerce, Science and Transportation Committee, went to Blue Origin's aid by tacking language to another bill, now known as the "U.S. Innovation and Competition Act," requiring NASA to award a second contract and saying Congress should spend another $10 billion to fund it.

The amendment was voted out of committee and is heading to a floor vote in the Senate. To become law, it still must pass the House, and appropriators would need to allocate the $10 billion, a tall ask in the middle of a pandemic. The wrangling continued in recent days, when the bill was revised to say the NASA administrator could not "modify, terminate or rescind" SpaceX's contract.

Still, Cantwell's amendment shows Bezos' growing influence in the nation's capital. Bezos' Amazon has been one of Cantwell's biggest donors during her time in the Senate. The amendment is perhaps unsurprising, given that Cantwell represents Washington state, home to Amazon and Blue Origin.

In recent years, Blue Origin also has given its operation in the nation's capital more muscle. It spent nearly $2 million in lobbying last year, up from a little more than $400,000 in 2015, according to OpenSecrets.org, which tracks spending. The company's political action committee has amped up its donations as well, spending $320,000 in 2020, up from $22,000 in 2016.

"Blue Origin and its contractors lost the HLS competition after proposing an inferior solution at more than double the price of the winning bid," it said. And it added that even though SpaceX won the competition, the amendment "creates what is effectively a sole-source [award] to Blue Origin without competition in violation of the Competition in Contracting Act."

The flyer noted that Blue Origin had received hundreds of millions of dollars in awards from NASA and the Pentagon for preliminary contracts but that the government "has chosen not to proceed with Blue Origin after every major development contract."

Bezos' company, SpaceX said, "has not produced a single rocket or spacecraft capable of reaching orbit." That was a point Musk amplified on Twitter.

Blue Origin punched back with a flyer of its own for lawmakers. "Elon Musk repeatedly talks about the value of competition, but when it comes to NASA's Human Landing System, he wants it all to himself," it said. And it noted that Musk had sued the Air Force for the right to compete against the United Launch Alliance for Pentagon launch contracts.

The company called SpaceX's claim that the amendment is an earmark for Blue Origin a "lie," and said the amendment would allow two teams to build landers. "Two providers promote competition that ensures greater safety and mission success through a dissimilar redundancy in approaches, while at the same time also controlling costs."

It alleged that NASA's selection process "was different for each bidder," and that SpaceX was allowed to "re-price" its bid "based on new budget information supplied by NASA that was not provided to the other bidders."

NASA's bias for SpaceX didn't end there, Blue Origin said. Blue Origin accused the space agency of incorrectly downgrading several of its technical designs that the agency "has previously reviewed, approved, and accepted." It added that by picking just SpaceX "NASA risks the nation's return to the moon entirely on SpaceX's ability to deliver its proposed solution -- Starship and the new Super Heavy booster -- despite the 'immense complexity' and 'high risk' NASA itself documented" in the selection document.

NASA has said that it wanted to award two contracts, but only had the money for one. Initially, NASA said the "current fiscal year budget did not support even a single [contract] award." As a result, SpaceX was allowed to update the payment schedule for its $2.9 billion bid so that it would fit "within NASA's current budget."

NASA noted that SpaceX's new payment schedule "did not propose an overall price reduction," and that SpaceX "was prohibited from changing content within its technical and management proposals." SpaceX also scored higher than Blue Origin on its "management rating," according to NASA.

Musk and Bezos founded their space exploration companies at about the same time -- Blue Origin in 2000; SpaceX in 2002. But SpaceX has moved much faster, and has accomplished much more. It first flew a rocket to orbit in 2008, then won lucrative contracts from NASA and the Pentagon. NASA relies on the company to fly cargo and supplies to the International Space Station and since last year SpaceX has launched three missions with astronauts to the orbiting laboratory.

Blue Origin, by contrast, has moved at a slower pace, mimicking its mascot, the tortoise. While it has flown its New Shepard vehicle to space 15 times, and is getting ready to fly its first mission with humans, the rocket doesn't reach orbit; rather it touches the edge of space some 65 miles up and then falls back to Earth.

After losing out on a lucrative Pentagon contract, the company said the first flight of its giant New Glenn rocket, which would be capable of delivering payloads to orbit, would be postponed until late next year. Originally, Bezos has said it would fly by 2020.

Bezos has said he would step down as CEO of Amazon later this year, and many in the space community, including Musk, have said they hope he focuses more of his attention on Blue Origin.

Gwynne Shotwell, SpaceX's president and chief operating officer, took a shot at Blue Origin's slow progress at a conference in 2019.

"I think engineers think better when they're pushed hardest to do great things in a very short period of time, with very few resources. Not when you have 20 years," Shotwell said. "I don't think there's a motivation or a drive there."

Getting to orbit has been a point of tension between the companies. In 2013, when SpaceX was in talks to lease launch pad 39A at the Kennedy Space Center from NASA, Blue Origin stepped in to say it wanted a shot to compete for the pad.

That incensed Musk, who pointed out that Blue Origin had yet to fly a rocket to orbit. Musk said in an email to SpaceNews, "if they do somehow show up in the next 5 years with a vehicle qualified to NASA's human rating standards that can dock with the space station, which is what Pad 39A is meant to do, we will gladly accommodate their needs."

But he added: "Frankly, I think we are more likely to discover unicorns dancing in the flame duct."

The following year, Blue Origin received a patent for landing rocket boosters on ships at sea, a feat SpaceX had been working to perfect and others had conceived of as well. SpaceX challenged the patent, and won, and in an interview with the Post at the time, Musk said that "trying to patent something that people have been discussing for half a century is obviously ridiculous."

The following year, Blue Origin landed one of its New Shepard vehicles, and Bezos on Twitter called it the "rarest of beasts -- a used rocket."

"Not quite 'rarest,'" Musk tweeted in reply, pointing to the fact that SpaceX had previously launched test rockets a few hundred feet into the air and landed them.

The next month, when SpaceX landed its Falcon 9 rocket for the first time, Bezos tweeted, "Welcome to the club!" Musk took it as a jab, since the Falcon 9 rocket is far more powerful than New Shepard and returned to Earth from delivering a payload to orbit.

Musk made another statement earlier this month, when SpaceX for the first time landed one of its Starship prototypes. It was the first flight of the vehicle it intends to use to fly NASA's astronauts to the moon since SpaceX won the contract -- a sign of its seriousness with developing real flight hardware.

It intends to make another statement when it attempts to refly the vehicle, a test flight that Musk recently said could come "soon." It also intends to fly Starship to orbit later this year. 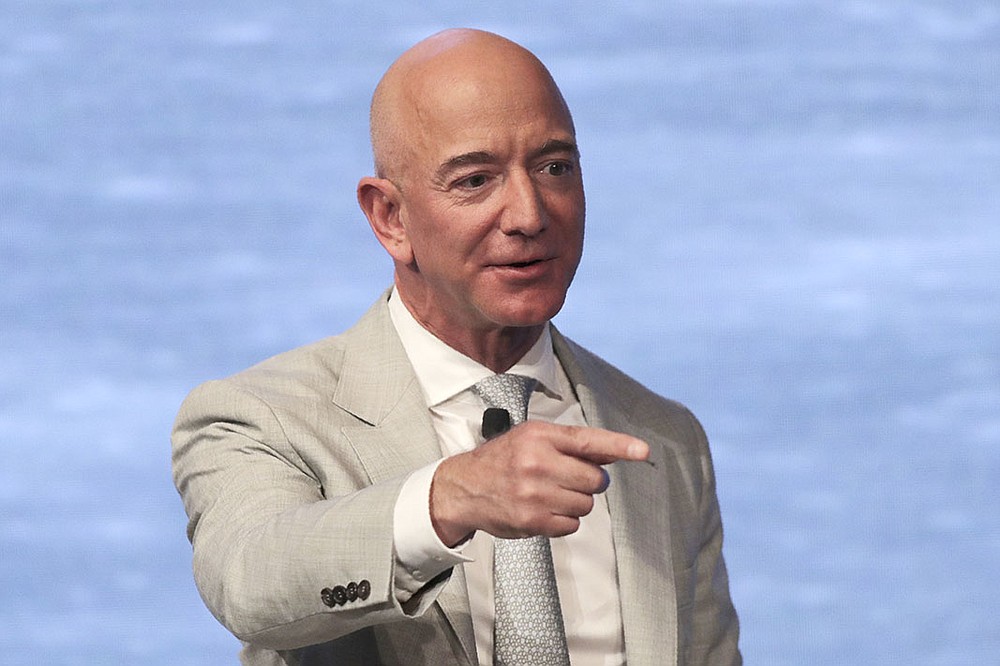 FILE - In this June 19, 2019, file photo, Amazon founder Jeff Bezos speaks during the JFK Space Summit at the John F. Kennedy Presidential Library in Boston. Bezos is one of the 50 Americans who gave the most to charity in 2020, according to the Chronicle of Philanthropy’s annual rankings. (AP Photo/Charles Krupa, File)
ADVERTISEMENT