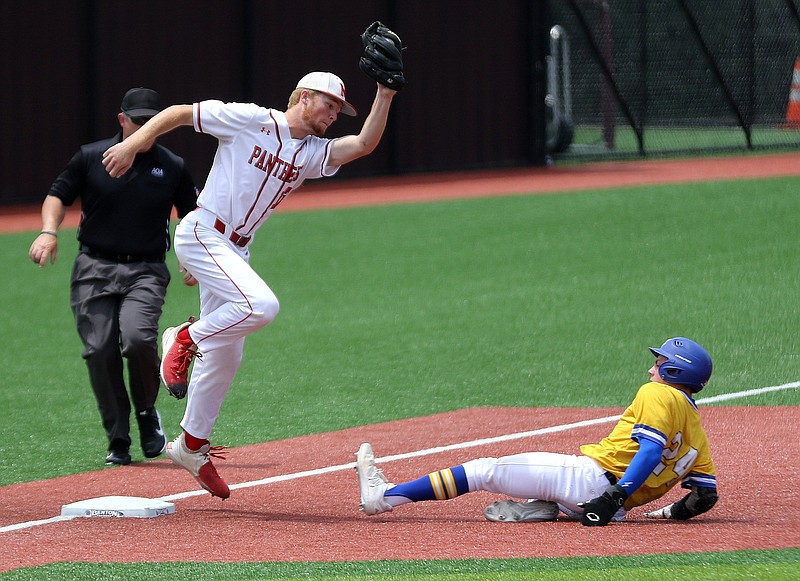 Valley View’s Slade Caldwell steals third base as Magnolia third baseman Tanner Nielsen gets set to attempt a tag during the sixth inning Saturday in the Class 4A state championship game in Benton. The Blazers won 8-1 to claim their first state title since 2009. More photos at www.arkansasonline.com/523baseball/ (Arkansas Democrat-Gazette/Thomas Metthe)

The way his players were celebrating near their dugout spoke volumes.

An RBI single from Slade Caldwell in the sixth inning snapped a tie game and opened up the floodgates for the Blazers, who captured their first championship since 2009 with an 8-1 victory over Magnolia at Everett Field.

Grayson Becker and Tyler Hoskins had two RBI apiece for Valley View (29-6), which didn't have a hit for the first five innings but rode the right arm of Brayden Anderson until the bats woke up in a three-run sixth.

Anderson, a senior who was chosen as the MVP, gave up 3 hits and 1 earned run while striking out 3 in a complete game as Valley View took home its third state title.

"You always hear it, but [winning] hasn't set in yet," Allison said. "We're just extremely excited, and I couldn't be any more proud of our team. Brayden Anderson ... I could go through a list of names. But to go through this run this year after everything, it's just unbelievable."

What was even more unbelievable was the way the Blazers were able to stay afloat without putting the ball in play for much of the game. Magnolia pitcher Seth Edwards kept Valley View from doing anything at the plate before Caldwell's hit in the sixth started a downhill spiral for the Panthers.

The Blazers scored seven runs over the final two innings to open up a sizable gap that Magnolia couldn't close.

"Tip your hat to Valley View," Magnolia Coach Bobby Beeson said. "They hung around, hung around, and the next thing you know, they bust it open in the sixth. We still had our chances, but we just couldn't take advantage.

"And then [Valley View] comes out in the seventh, and you can tell my pitcher got a little tired. But we were going to ride him because he's been our workhorse all year."

Edwards lasted 6 1/3 innings and allowed 3 hits against 4 walks. He also struck out five for Magnolia, which was making its first appearance in the championship game since 2017.

Valley View manufactured a run in the top of the fourth by getting aggressive on the bases. After Becker flied out, Caldwell drew a walk and subsequently stole both second and third before scoring on a sacrifice fly from Hoskins.

The Panthers tied it at 1-1 in the bottom of the fifth on Tanner Edwards' RBI double, but Wil French's triple in the top of the sixth kick-started Valley View's flurry. Caldwell, a freshman who's already committed to the University of Mississippi, sent French home on his infield hit to give the Blazers a 2-1 advantage. Hoskins had another sacrifice fly three pitches later to score Becker, who'd walked earlier, and Caldwell scurried home shortly thereafter on an error.

"We never die, we never panic," Allison said. "It was just a matter of time. Those guys just kept believing. We put a lot of pressure on [Magnolia] the whole game. We didn't have any hits for it, but we were hitting balls really hard.

"Eventually, it turned around in our favor."

Valley View continued its onslaught in the last inning. French had an RBI single, and Becker drilled a two-run double to make it 7-1. French also scored on a wild pitch. Anderson then retired the Panthers in order in the bottom of the seventh to win it.

"He's got ice water in his veins," Allison said of Anderson. "He doesn't throw 90, he throws 80. But he competes his freaking butt off, and I couldn't be more proud of him.

"Nobody picked us to [win]. That's what makes it pretty special." 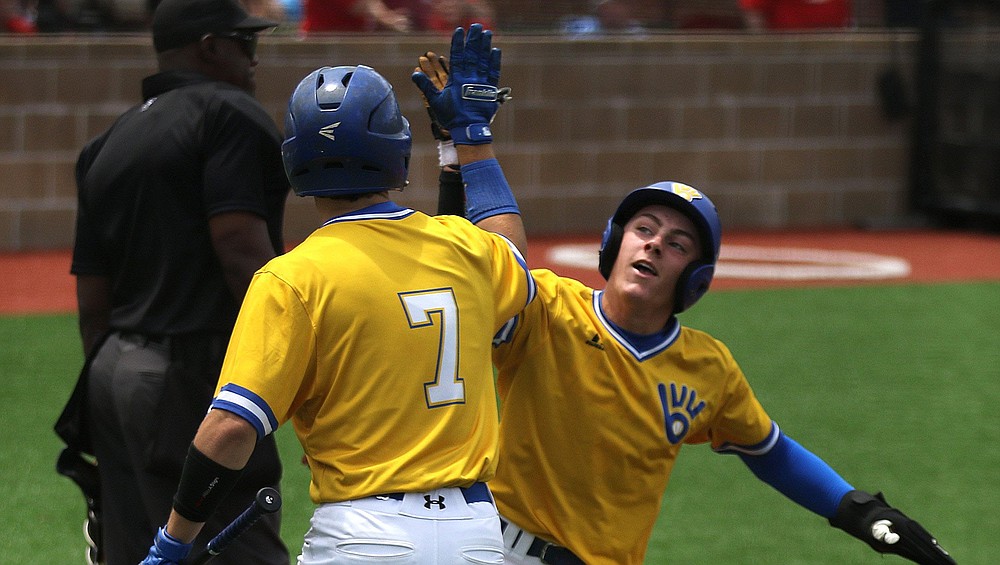