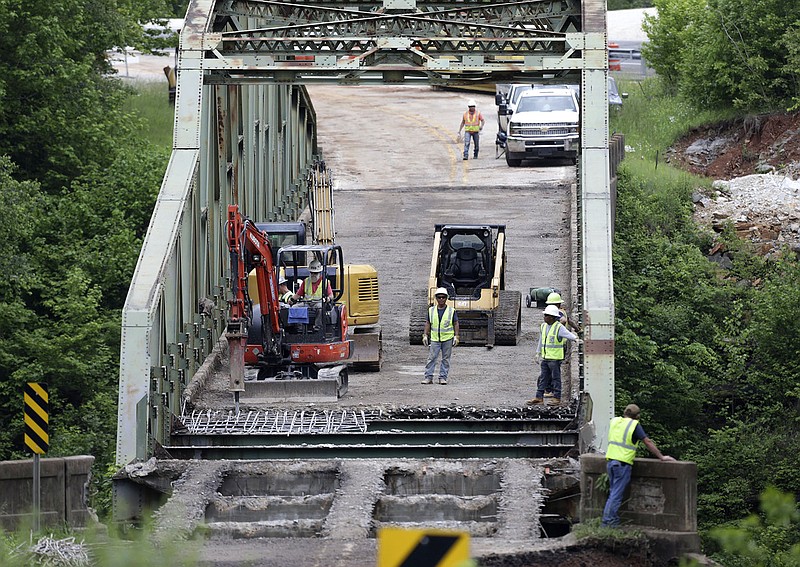 Construction teams work on demolishing the old Pruitt bridge on Arkansas 7 on Thursday. Demolition of the historic span over the Buffalo River began last week after a new bridge opened. Preservationists tried to prevent the demolition, but nobody wanted to assume the cost of maintaining the old bridge. (NWA Democrat-Gazette/Charlie Kaijo)

There's a new bridge over the Buffalo River on Scenic Arkansas 7 in rural Newton County.

"We actually shot out a space underneath the bridge, made it taller than it would be, to allow horses and people to go underneath," said Steve Lawrence, district engineer with the Arkansas Department of Transportation.

Horseback riders now have about 12 feet of clearance when riding the Old River Trail underneath the bridge, which is about 6 miles north of Jasper.

Before the underpass, horseback riders had to cross the pavement of Arkansas 7. Because of a curve, motorists coming down the highway from the north couldn't see the horses ahead of time.

"We've had to have animals hustle off the highway because cars were coming way too fast off that blind corner," said Jeff Blake of Gaither, president of the Buffalo River Back Country Horsemen. "Horses on pavement don't get good traction."

Blake said the cars may not have been speeding, but from his vantage point in the saddle, it certainly seemed so.

The new bridge at Pruitt Landing on the Buffalo River opened May 14, diverting traffic from an old bridge 200 feet to the west.

Ninety years ago, mule teams moved earth to build a bridge over the Buffalo River. The project provided jobs during the Great Depression.

Work began last week to demolish that bridge, which for many was a reminder of another time, before land adjacent to the Buffalo River became a national park in 1972.

Jones said his uncles helped build the old bridge. He said more than 3,000 people signed petitions trying to save it.

But ultimately nobody wanted to assume responsibility for its maintenance, Lawrence said.

The old Pruitt bridge was one of the last Pennsylvania through-truss bridges remaining in Arkansas.

The steel bridge was designed and built in 1931 by Fred Luttjohann of Topeka, Kan., who constructed several bridges in Arkansas.

"This is a truly unique bridge, with no other similar bridge known to exist," according to Historicbridges.org. "The three span truss bridge consists of what is essentially a pony truss span at each end with a through truss center span. The shape of the trusses gives the bridge a continuous ... cantilever appearance. However, the bridge functions as simple truss spans, and the unusually shaped trusses were apparently only built as such to facilitate construction."

Lawrence said the contractor has until September to remove the old bridge, but it probably won't take that long.

"They're in the process of removing roadway this morning," he said Wednesday.

The old and new bridges are 72 miles north of Russellville on Arkansas 7, where the town of Pruitt once existed.

Arkansas 7 is the main highway through Newton County. About 2,600 vehicles per day travel over the bridge at Pruitt. That includes about 200 big trucks.

Both the old and new bridges have two traffic lanes, but the new bridge also has a 5-foot-wide sidewalk on the west side, protected from the traffic lane by a concrete and metal barrier wall.

The new bridge is 45 feet wide, compared with 20 feet for the old bridge.

Instead of 10-foot-wide traffic lanes, the new bridge has 12-foot lanes with 8-foot shoulders.

Blake said he has yet to ride the trail underneath the bridge. It's been too rainy. But he has walked it.

"They absolutely did a wonderful job, and now it's a safe crossing," he said. "It's a well-engineered, well-constructed cutout of the embankment the bridge goes into."

Blake said the highway department also constructed a guardrail along the horse trail.

"They went above and beyond," he said. "They really thought it out perfectly. I couldn't be any happier."

Dean Crouse, owner of the construction company, said he's been talking with the Newton County Historical Society about preserving part of the bridge to be used as a monument in Jasper, which is the county seat.

"We're not sure exactly how or what we're going to do," Crouse said.

Stacy Burge, construction engineer for the highway department's Harrison office, said signs will be put up to let people know about the history of the old bridge. Exactly where the signs will go has yet to be determined.

The highway department plans to post three-dimensional models of the old bridge on a section of its website devoted to the state's historic bridges. 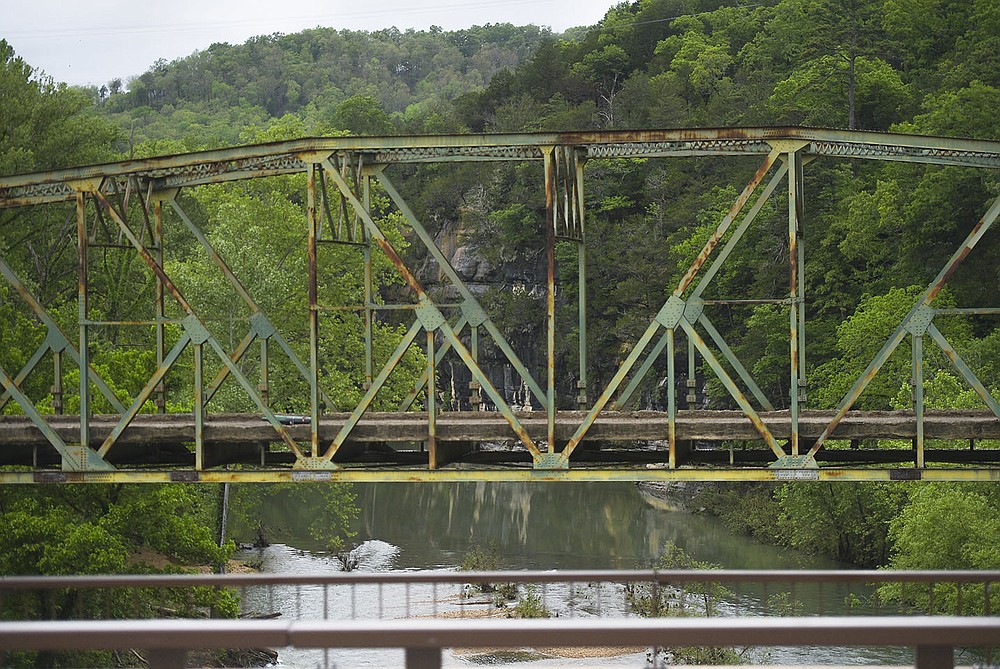 The old Pruitt bridge was still standing but no longer open to traffic Thursday as demolition work began. The bridge on Arkansas 7 over the Buffalo River was designed and built in 1931 by Fred Luttjohann of Topeka, Kan., who constructed several bridges in Arkansas. (NWA Democrat-Gazette/Charlie Kaijo) 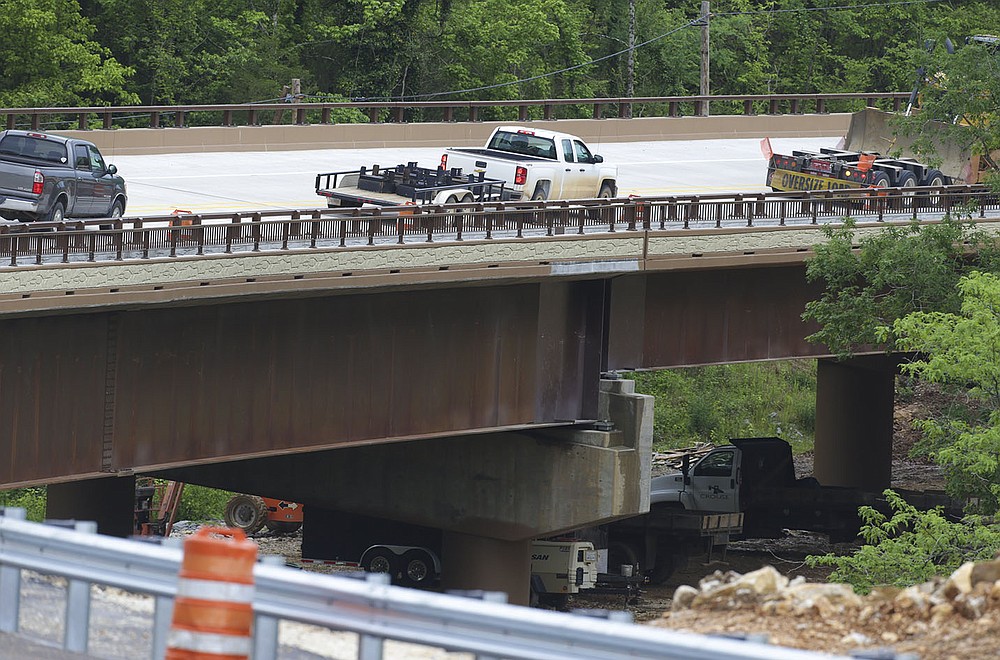 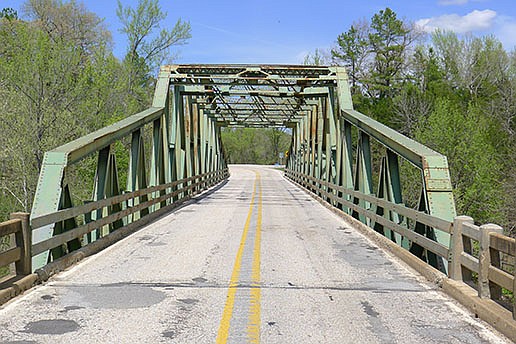 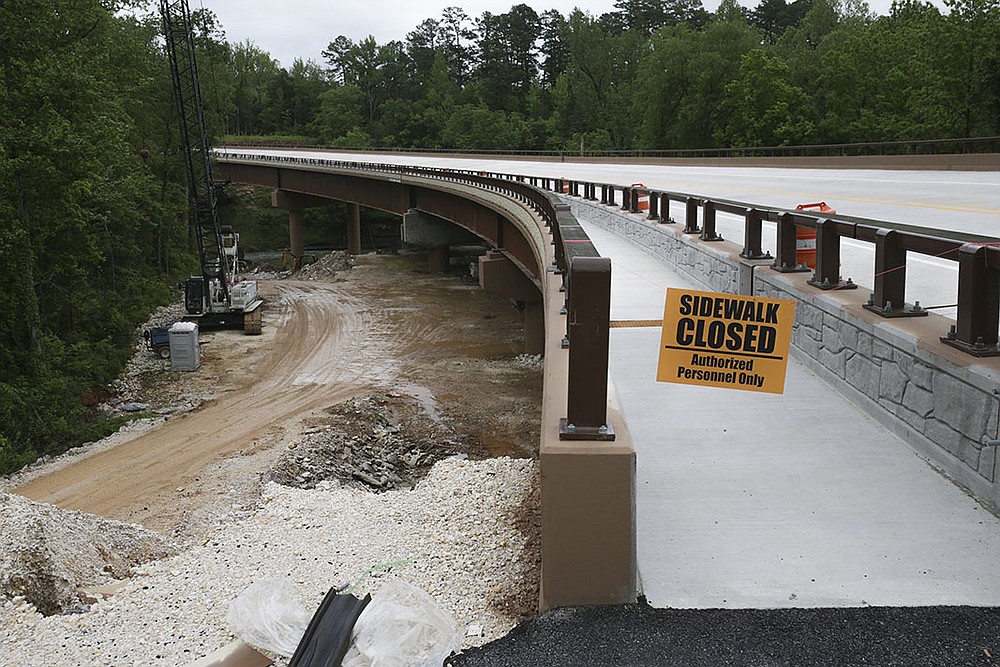 A walkway on the new bridge at Pruitt is almost ready for use. The bridge also has about 12 feet of clearance underneath, high enough for horseback riders to stay on the Old River Trail. Previously, they had to make a dangerous crossing on the old bridge. (NWA Democrat-Gazette/Charlie Kaijo)
ADVERTISEMENT