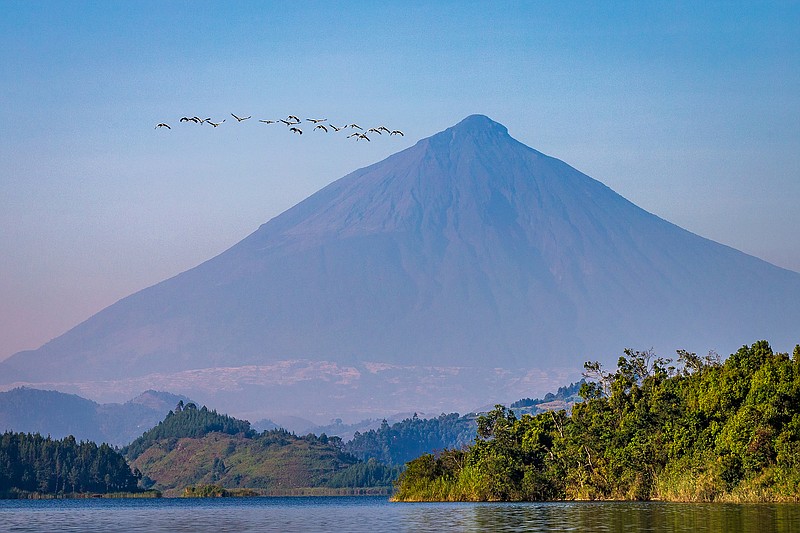 Mount Muhabura is one of the eight Virunga volcanoes, viewed from Lake Mutanda in Uganda. (Courtesy of Marcus Westberg)

In wistful moments, when I find myself daydreaming about the faraway places that have seldom felt so distant, I often linger on a border region of central Africa.

To the outside world, it's a place that can be conjured by a single word: Virungas. That's the Kinyarwandan name for the eight volcanoes — two active, six dormant — that stand sentinel over the tripartite border of Uganda, Rwanda and Congo. In between them, deep freshwater lakes, carved by millennia of tectonic shifts on the western branch of the Great Rift Valley, dot verdant lowlands. And on the volcanic slopes, which grow thick with Afromontane forest, live the 1,000 or so remaining mountain gorillas, arguably the most coveted wildlife encounter on Earth.

In many respects, these remote and geopolitically volatile borderlands might seem like an unlikely place to seek solutions for the crisis of travel in the covid era. But here, too, people are grappling with existential questions: Will the coming months see travel, aided by vaccine rollout, rebound to something like 2019 levels? Or is the rest of 2021 better viewed as an opportunity to reform and reset, to build something better from the rubble?

For Miha Logar, a travel industry veteran in this part of East Africa, the answer was obvious from the moment the first cancellations pinged into his inbox. "It was clear pretty quickly that this was going to change everything," he says. "We knew we had to innovate to survive."

Logar, who is originally from Slovenia, first arrived in Uganda in 1999 as a student journalist researching a thesis on the potential of the internet to transform the lives of female farmers. Two years later, bewitched by the area, he launched the social enterprise that would become his life's work.

"I had this idea of creating a window onto this region of Africa," he tells me, on a video call from his home in Musanze, in northern Rwanda.

Starting out with a collection of huts on the north shore of Lake Bunyonyi, in Uganda's southwest corner, Logar has since pursued all sorts of ventures. Over the years he has opened a hostel in Kabale, curated an ethnographic museum, organized a regional cooking contest and overseen a boutique publishing operation. But it has all been in the service of one abiding mission: to formulate an identity for the region Logar has come to call home and to shape its tourism economy in a way that directly benefits local people and nature.

Today, Logar, who is 46, newly slim after a lockdown diet and sporting a graying musketeer's beard, presides over an organization that runs tours in all three countries of what he calls "the Gorilla Highlands," the putative brand of the transboundary region in which it operates. Most of these tours are determinedly off-track, lingering in agrarian backcountry that no other tour groups cover. 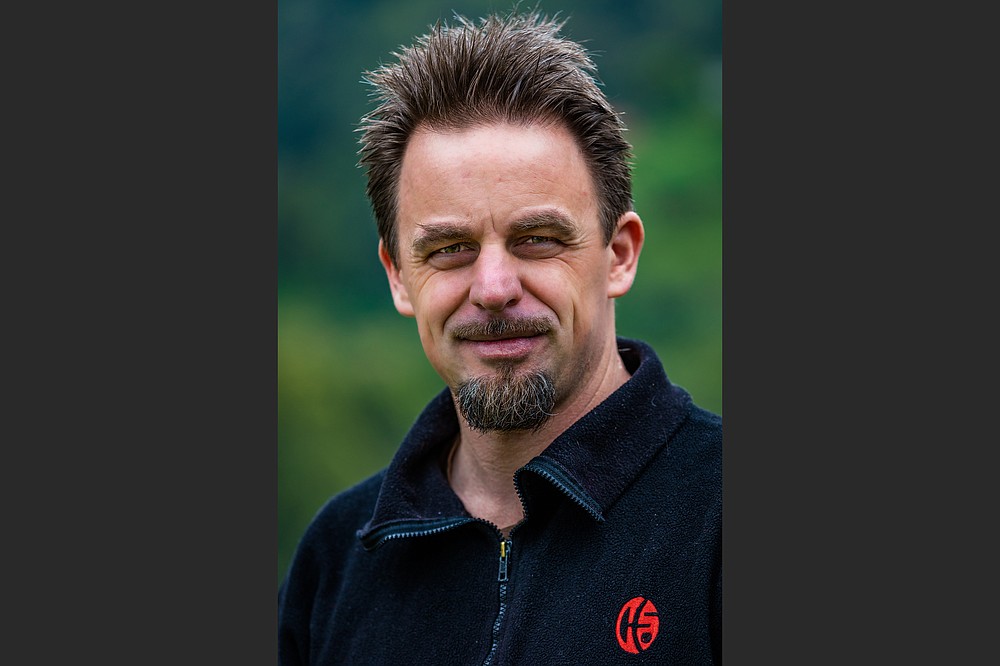 In early 2020, as the coronavirus surged across Europe, the large group bookings of German tourists and British students, which had been the backbone of the calendar in previous years, were soon postponed indefinitely, then canceled for good. In common with most sub-Saharan countries, coronavirus rates in this part of Africa have stayed low over the intervening months. But inbound travel over the last year has nevertheless collapsed to a trickle.

"Lots of people were scrambling to convert bookings into future arrangements, asking clients to pay now, travel later," Logar says. "But the start of the pandemic was actually a very interesting period; everybody suddenly had time to take stock and think about new ideas."

Logar's response was characteristically inventive. On Feb. 1, he launched "Gorilla Highlands Experts," a membership service for people who want to learn about and engage with this singular part of East Africa. After a free trial period, subscribers pay $10 per month for access to a proprietary menu of online resources, events and virtual tours. As travel opens up, members will also be invited to take part in special events such as the Gorilla Highlands Mega Trek, an epic multi-week transboundary journey from Lake Bunyonyi in Uganda to Bukavu in Congo, scheduled for December.

Daily content is produced by the "Experts" of the project's handle, a roster that includes primatologists, historians, cartographers and local musicians. One day, award-winning chef Ramadhan "Rama" Sindayigaga is sharing twists on regional specialties like spicy sambaza fish. The next, photographer Marcus Westberg is contextualizing some of his favorite images. Several national park staff members will be chipping in with blog posts, too. "Not many people know about our park," says Gloria Mwenge Bitomwa, tourism director of Kahuzi Biega National Park, in Congo, west of Lake Kivu. "This platform gives us an opportunity to raise awareness."

In the same way that Substack or Patreon might enable people to support creators directly, this new model will become a locus for people who have already been to the Gorilla Highlands region, as well as a planning portal for people who might wish to go there in the future, Logar hopes. The membership fees, he says, will help sustain the project during slack periods. But, perhaps more ambitiously, the model could also counteract the atomized way that many people perceive and experience the wider world.

The one-stop-shop concept was inspired by a problem that long predated the pandemic: Visitors to the Gorilla Highlands were not staying long enough. In many ways this was a consequence of prevailing travel habits. Ever-improving transport links, combined with East African tourism's long association with animal-watching and all-inclusive luxury, meant that most visitors to the region were landing in Kampala in Uganda or Kigali in Rwanda knowing nothing of their destination beyond the megafauna that might inhabit its wild corners.

The Virungas could scarcely be a better exemplar of this phenomenon. "Usually, travelers with a lot of money tend to travel fast," Logar says. "They come here for one or two days, then leave straight away because they have three or four other countries on the itinerary."

This highlight-hopping tendency has inclined visitors toward short stays oriented around central Africa's shiny object — mountain gorilla tracking — in marquee conservation areas, like Bwindi Impenetrable National Park in Uganda, or Rwanda's Volcanoes National Park. However, the Gorilla Highlands project has always focused more on its catchment's less tangible assets, the stuff you don't see in the international promotion campaigns. "We like to travel slowly, stay in the community, go overland," Logar says. "That way the financial contribution is far more likely to reach local people."

The idea of "slow travel" has been a watchword in sustainable tourism circles for a decade or more. But the coronavirus pandemic, which has exposed the limitations of thoughtless free movement, has lent it a renewed urgency. Many industry experts have predicted that the post-covid era will see discerning travelers eschew highlight-oriented, multi-stop itineraries in favor of more immersive, single-destination trips that foster a deeper investment in places and people.

"Travel has, at some level, always been about self-realization and meaningful connections," says Harold Goodwin, managing director of the Responsible Tourism Partnership. "The inertia of the last year, coupled with growing concerns about climate change, will likely see people prioritize this side of holiday-making like never before."

The aspiration is that the Experts platform will nudge prospective visitors toward these longer, more meaningful trips, but without jeopardizing the area's vital asset: the authentic and respectful cultural exchange that can only occur in places where tourism has yet to be viewed as cynically transactional. 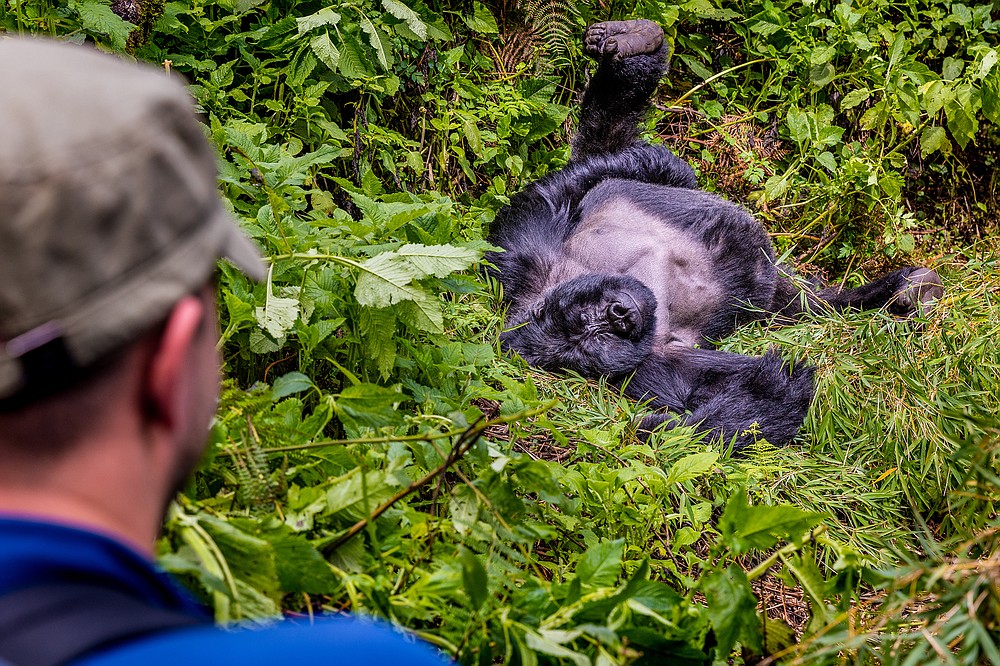 As someone who has traveled in the region extensively, it's hard to see this forecast trend as anything other than a win-win, for the potential of this region to satisfy the curiosity of even the most dilettantish traveler scarcely bears exaggeration.

You wake up each morning to gauzy horizons serrated with dormant volcanoes, most of which you can attempt to summit at dawn, dampened by the clouds. You can walk through recumbent, tin-roofed villages pursued by retinues of uproarious children, then up the sides of extinct craters whose inner slopes have been intensively cultivated so that their bowls overflow with coffee and cassava. On muddy embankments in gloaming forest, you might feel your knees wobble as adolescent gorillas inch to within a foot of where you stand to paw your neighbor's tripod. In Congo, you can spend a night on the summit of Mount Nyiragongo and peer down into a roiling molten cauldron, among the most spectacular lava lakes on Earth. In the evenings, you can camp on islands in Edenic Lake Bunyonyi, eating crayfish tails and fire-baked manioc, while crested cranes roost in the nearby trees, honking at the sunset.

How much of this majesty might be appreciable via Zoom remains a work in progress. One Saturday at the end of February, Logar hosted the first of what will be quarterly online picnics, his masked face appearing in front of a library modeled as a castle keep, part of the school his children attend in Musanze. 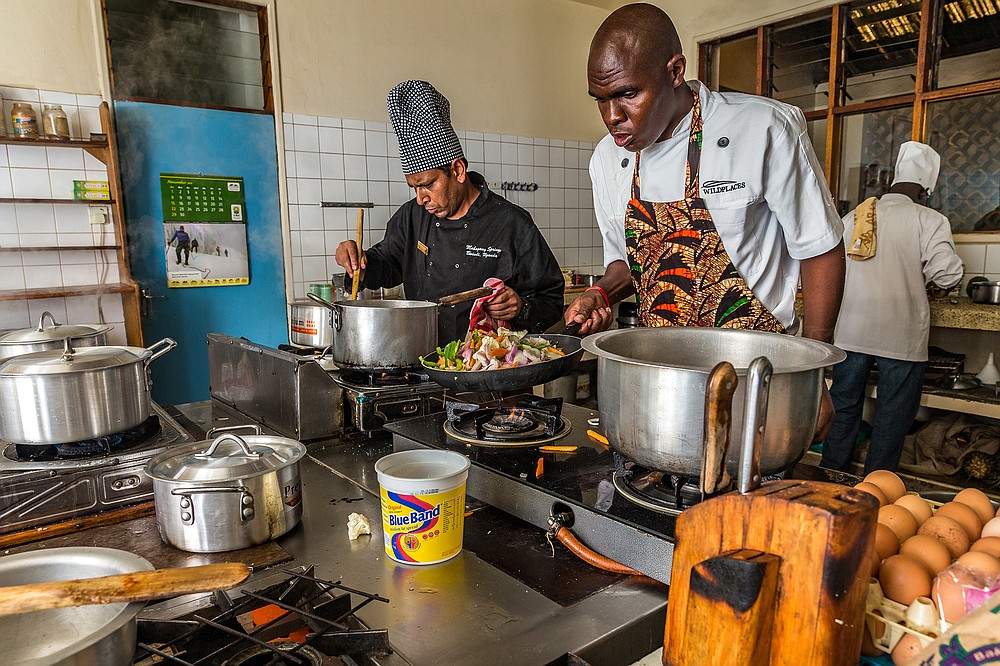 It's a raucous, ad hoc affair with the platform's early members dropping in from California, Sweden, Germany and beyond to hear Logar set out his stall. "It's a trial run," he booms, clearly enjoying himself, as the inevitable technical glitches interrupt a promotional video. Emmanuel Harerimana, a charismatic Rwandan park ranger, describes the challenges of caring for mountain gorillas during a pandemic. In the background, Chef Rama works the grills.

It wasn't the same as being there. But, in this inert year in which even travel journalists like me have seen their passports gather dust, it was transportive and fun — a shot of the unfamiliar.

"An online event is never going to capture the essence of our region. It's a placeholder," Logar tells me afterward. "For now, we are focused on feeding the imagination. This is about giving us all something to look forward to."