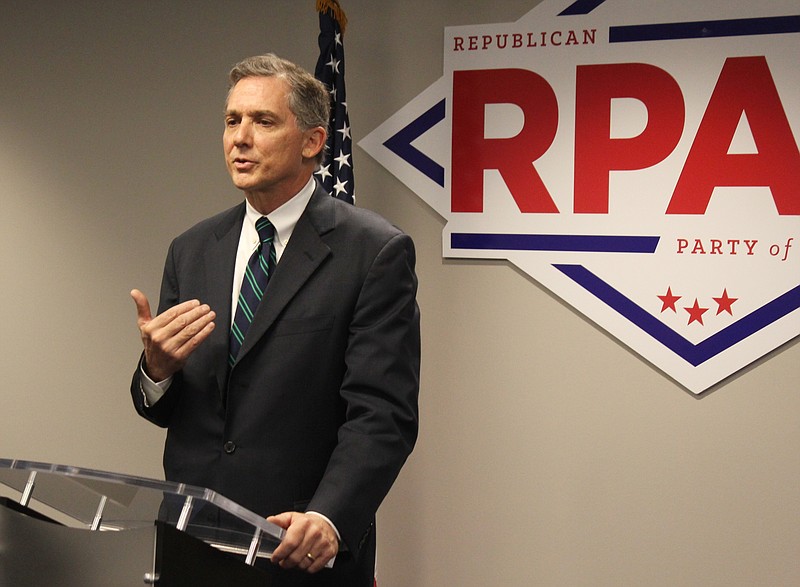 In the U.S. House, Hill serves as co-chairman of the Congressional Bipartisan HBCU Caucus, along with U.S. Rep. Alma Adams, D-N.C. On Wednesday, they touted their bill, dubbed the Institutional Grants for New Infrastructure, Technology and Education for HBCU Excellence Act.

The amount of money they're seeking has not been determined, Adams said, but she suggested that it would be substantial.

"For over 150 years, HBCUs have been agents of equity, access and excellence in education, despite being ignored and marginalized by federal and state governments. This historic bipartisan bill changes that," she said.

Hill, who has three historically Black colleges in his district, said the legislation would help "ensure that HBCUs have a bright future ahead of them."

"This bill will, in my view, give them the tools and conditions and infrastructure they need for the campus in the future and the students of the future," Hill added.

The legislation authorizes funding for constructing, renovating, preserving or modernizing school facilities, plus money for high-speed broadband services and other priorities.

It will be championed in the U.S. Senate by Sens. Tim Scott, R-S.C., and Chris Coons, D-Del.

Historically Black colleges make up around 3% of all four-year colleges, but their impact is significant in the African American community, caucus officials said.

A disproportionate number of those are low-income or first-generation college students.

U.S. Rep. Danny K. Davis, D-Ill., who attended the announcement, said the schools offered a path out of poverty for him, his four sisters and his two brothers.

The son of an Arkansas Delta sharecropper, he worked in Ashley County's cotton fields before leaving home at age 16 to attend a historically Black college in Jefferson County.

Studying at Arkansas Agricultural, Mechanical and Normal College, now known as the University of Arkansas at Pine Bluff, changed his life, he said.

"Had it not been for these HBCUs, I wouldn't be standing here this afternoon as a member of Congress," Davis, 79, told reporters and fellow lawmakers.

After sharing his story, he urged everyone to get behind the bill.

"Spread the word," he said. "Make sure everybody gets it."

In an interview, Adams said she plans to do just that.

"IGNITE. That's what we call the bill, so we're going to light that flame today and move forward," she said.

The bipartisan nature of the caucus "shows that we can work together -- members of both parties," she said.

"This has been wonderful," she added.

With Republicans and Democrats joining forces, "we're going to hopefully make some headway," she said.

If the bill becomes law, then it will give a big boost to Philander Smith and other historically Black colleges and universities, he said.

"We've never been fully funded. We've always been under-resourced. But we have been able to still do amazing things and graduate amazing students who've gone on to change the world for the better," he said.

"This legislation provides the type of resources to our institution that will allow us to address things, quite honestly, that we have not been able to address," Smothers said.