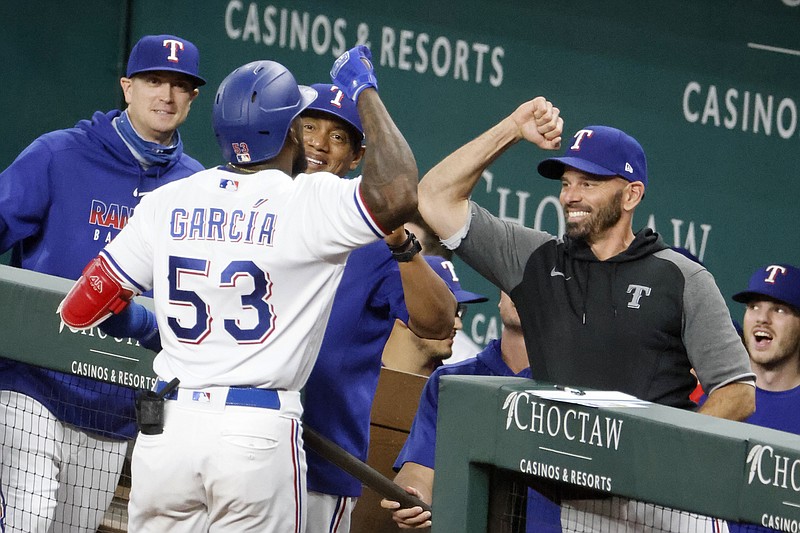 Garcia, who hit a three-run, walk-off drive in the 10th inning to beat the Astros 7-5 on Friday night, had a solo home run in the fifth. The 28-year-old Cuban rookie added another solo shot in the seventh off Andre Scrubb (1-1).

"Adolis keeps doing his thing," Rangers Manager Chris Woodward said. "He loves being in those moments."

Garcia has 14 home runs this year, one behind major-league leader Ronald Acuna Jr. of the Braves.

"I was excited a little bit," Garcia said through an interpreter, "but no more than usual. I feel this is the most focus I've had in my career. I'm adjusting to what they're trying to do so far."

Jose Trevino hit a two-run double during a five-run seventh inning as the Rangers overcame a 4-3 deficit.

"They have a couple hot hitters," Houston Manager Dusty Baker said. "Garcia's got three home runs in two games, and [Isiah] Kiner-Falefa's tough every time we play him."

Kolby Allard (1-0) entered the game with a runner on second base with two out in the top of the seventh and held the Astros scoreless for 1 1/3 innings.

Houston supported starter Lance McCullers Jr. with three runs in the first two innings and another in the fourth. He left the game with a 4-3 lead after throwing 105 pitches in five innings.

"I was lucky to get in five," McCullers said. "Forty pitches in the first inning is a bad way to start. I was throwing good, quality pitches, but they hit a ton of foul balls in that first inning."

"We knew their pitching was a little thin," Woodward said, "and they had to go to some guys right away."

McCullers struck out four in a first inning when no Ranger hit a fair ball. He walked the first two and struck out two before Joey Gallo reached first base on a third-strike wild pitch. Khris Davis was the fourth to strike out, swinging through a 3-2 pitch.

In the first, the first three Astros reached base against Texas starter Jordan Lyles, who allowed 4 runs and 7 hits in 6 innings. Yordan Alvarez had an RBI grounder and Yuli Gurriel followed with a sacrifice fly for a 2-0 lead. Chas McCormick led off the second with his third home run.

INDIANS 5, TWINS 3 (10) Cesar Hernandez hit a two-run home run in the 10th inning off Alex Colome, giving Cleveland a victory over Minnesota that dropped the Twins to 0-8 in extra-inning games this season.

BREWERS 4, REDS 3 Daniel Robertson hit his first home run in more than two years, a tiebreaking, seventh-inning drive in his second game back from a concussion as Milwaukee topped Cincinnati.

BRAVES 6, PIRATES 1 Ozzie Albies hit home runs from both sides of the plate and Ronald Acuna Jr. led off with his major league-best 15th home run as Atlanta beat Pittsburgh. Albies hit a two-run shot in the fifth as a left-handed hitter. He hit another home run, his ninth, from the right side in the seventh.

CARDINALS 2, CUBS 1 Four pitchers combined for five innings of scoreless, two-hit relief after Miles Mikolas appeared to get injured in his delayed season debut, and Yadier Molina hit a tiebreaking home run that lifted St. Louis over Chicago. Molina broke a 1-1 tie when led off the seventh inning with his seventh home run this season.

NATIONALS 12, ORIOLES 9 Ryan Zimmerman hit a tiebreaking three-run home run and finished with three hits, and Washington overcame a pair of five-run deficits in a win over Baltimore.

PADRES 6, MARINERS 4 Eric Hosmer hit a two-run, bases-loaded single and Fernando Tatis Jr. came around and scored on an error on the play to highlight the five-run fifth inning for San Diego in a victory over Seattle. 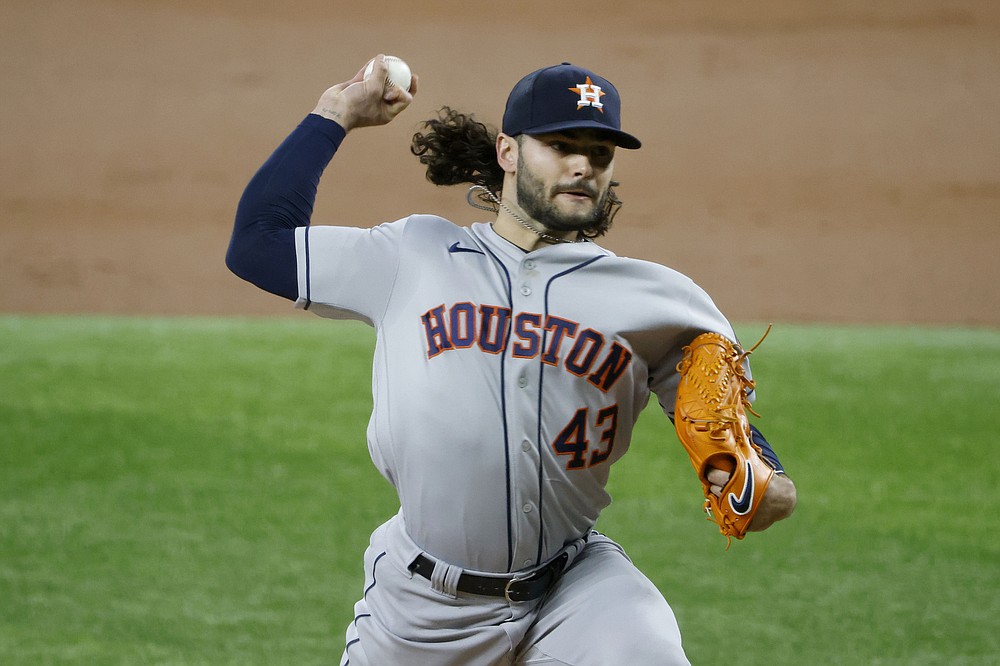 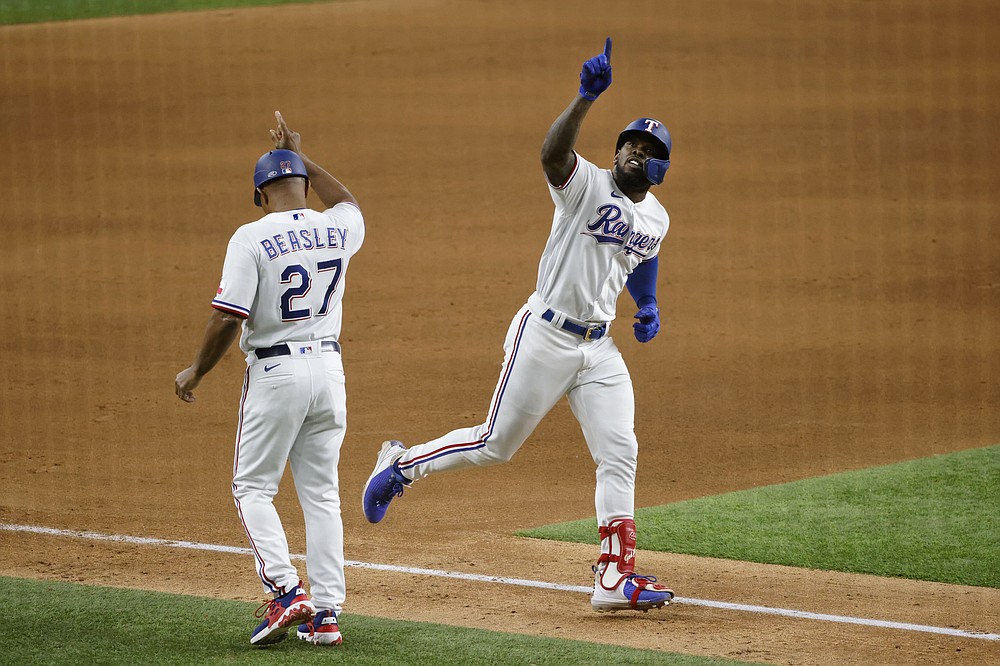 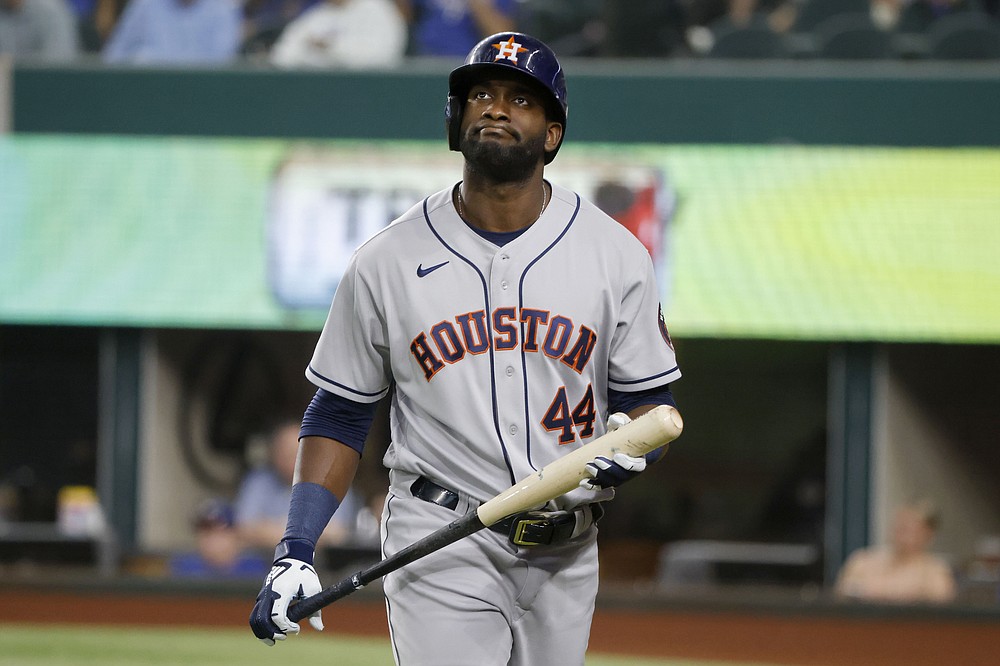 Houston Astros designated hitter Yordan Alvarez reacts after striking out against the Texas Rangers during the fourth inning of a baseball game Saturday, May 22, 2021, in Arlington, Texas. (AP Photo/Michael Ainsworth) 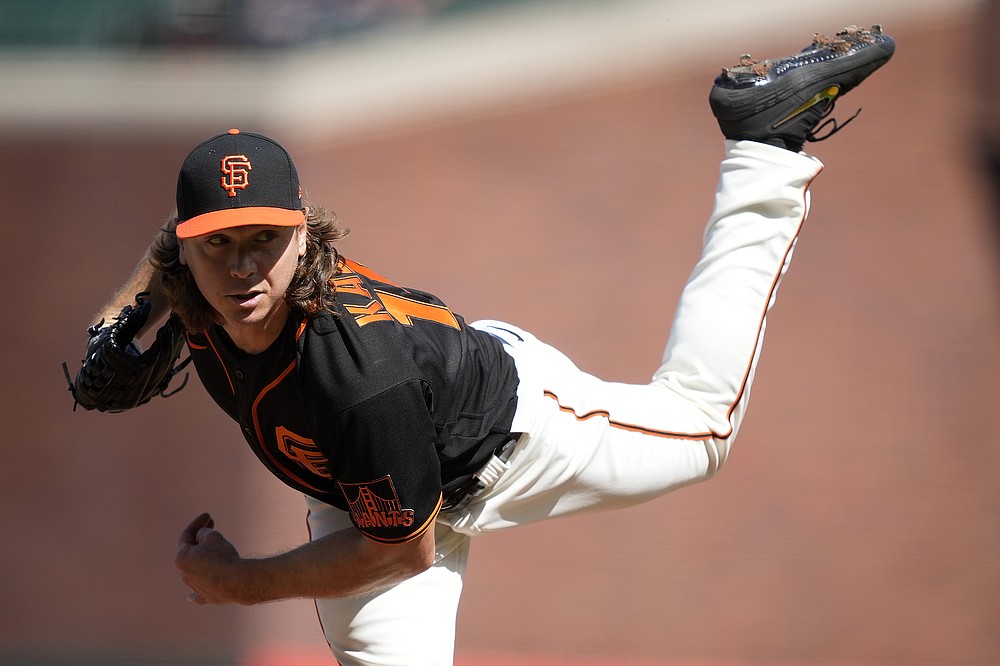 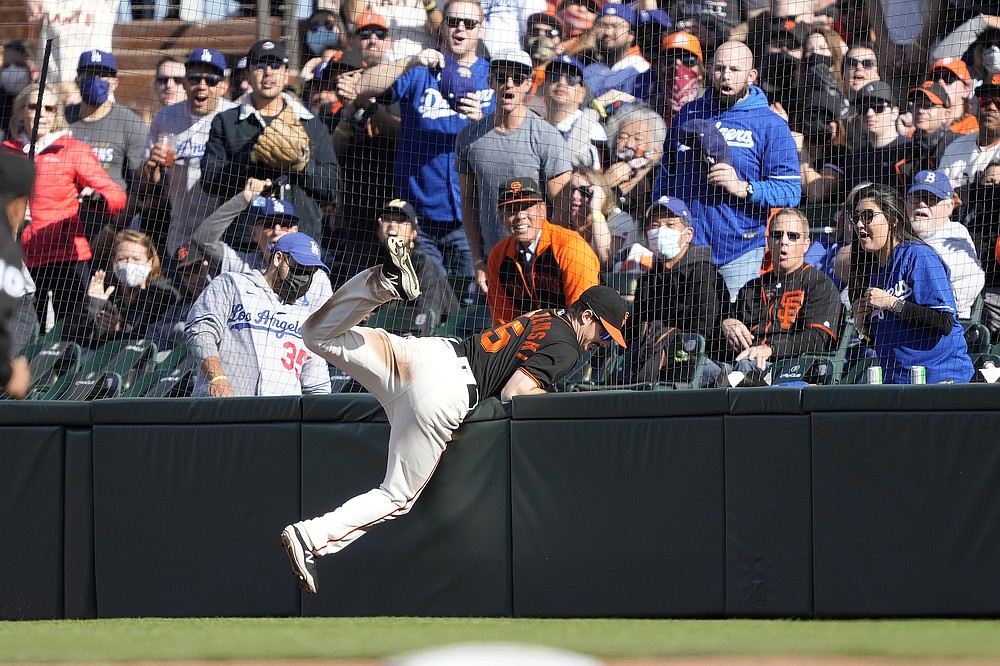 San Francisco Giants right fielder Mike Yastrzemski collides with the fence after making the catch on a popup fly by Los Angeles Dodgers' Walker Buehler during the fifth inning of a baseball game Saturday, May 22, 2021, in San Francisco. (AP Photo/Tony Avelar) 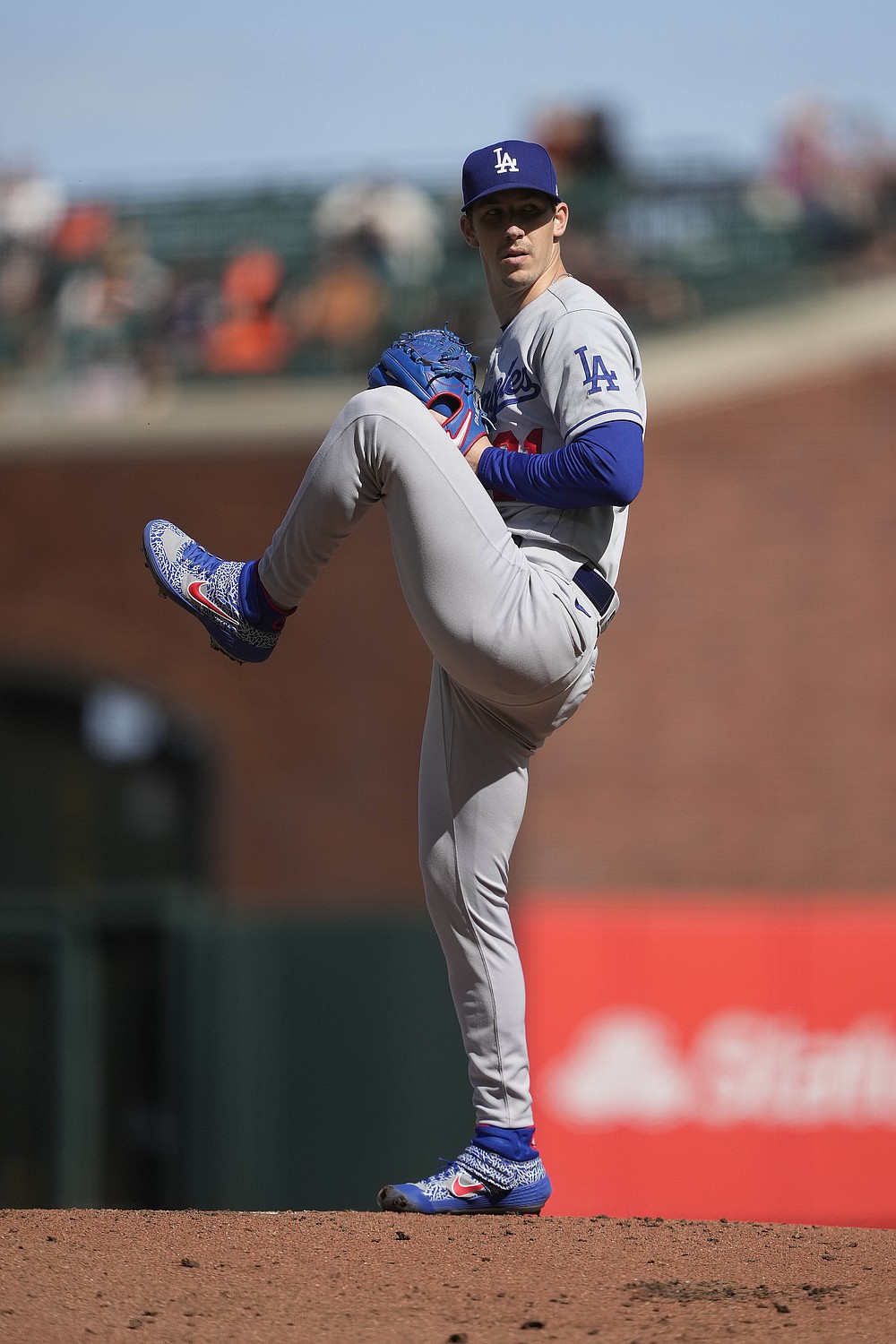 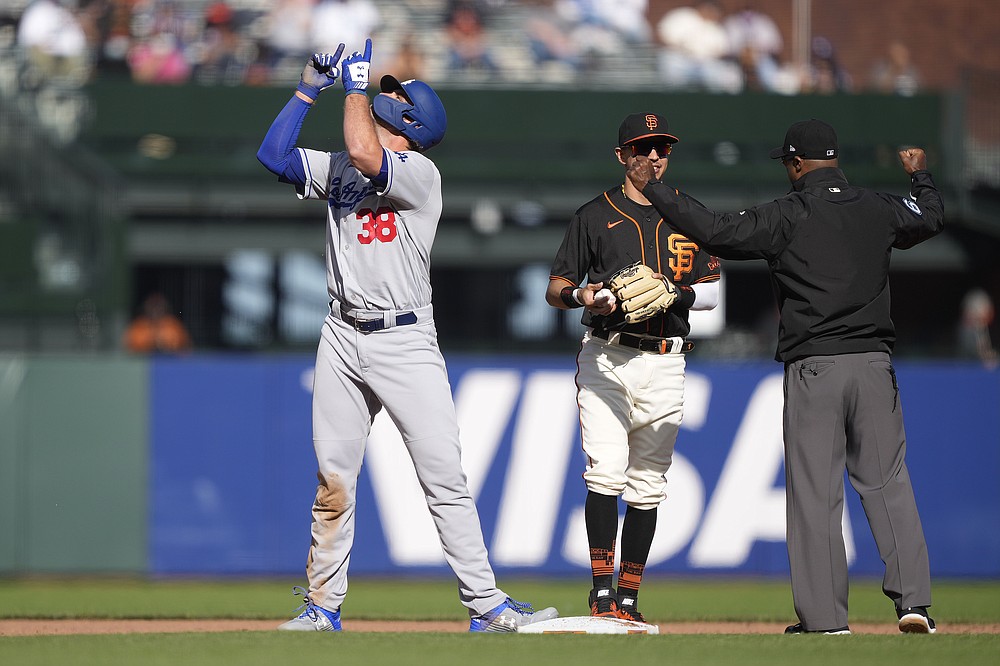 Los Angeles Dodgers' DJ Peters (38) points skyward after hitting a double against the San Francisco Giants during the fifth inning of a baseball game Saturday, May 22, 2021, in San Francisco. (AP Photo/Tony Avelar) 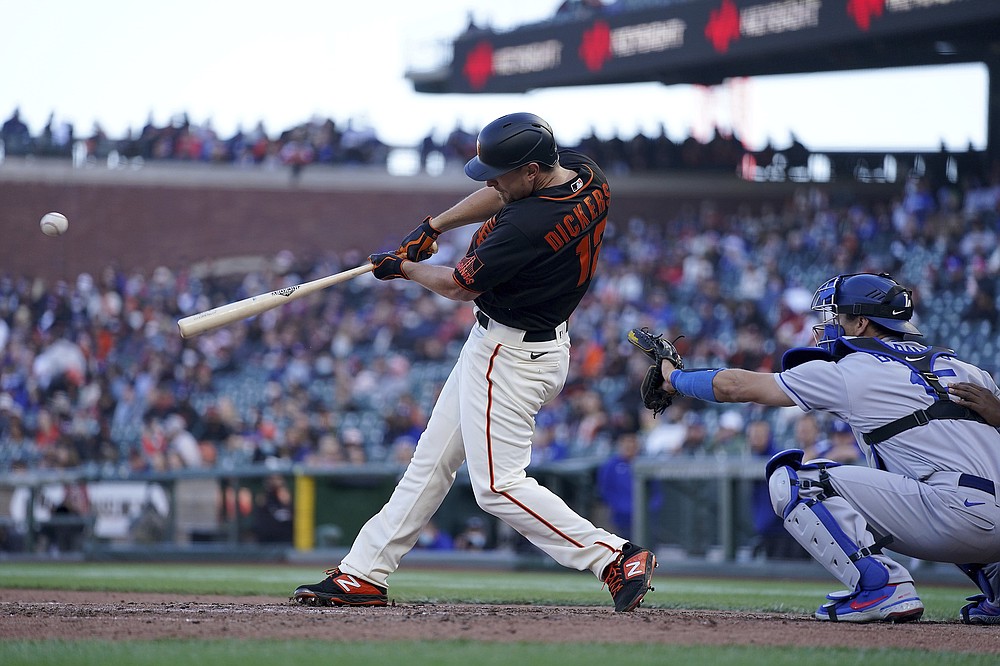 San Francisco Giants' Alex Dickerson (12) hits a single to drive in a run against the Los Angeles Dodgers during the seventh inning of a baseball game Saturday, May 22, 2021, in San Francisco. (AP Photo/Tony Avelar) 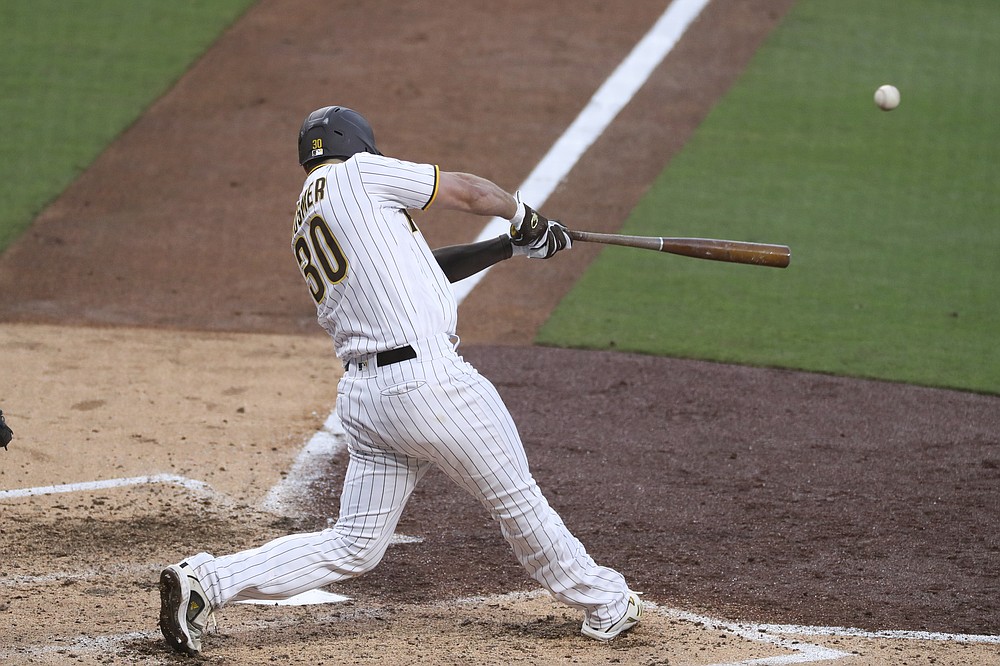 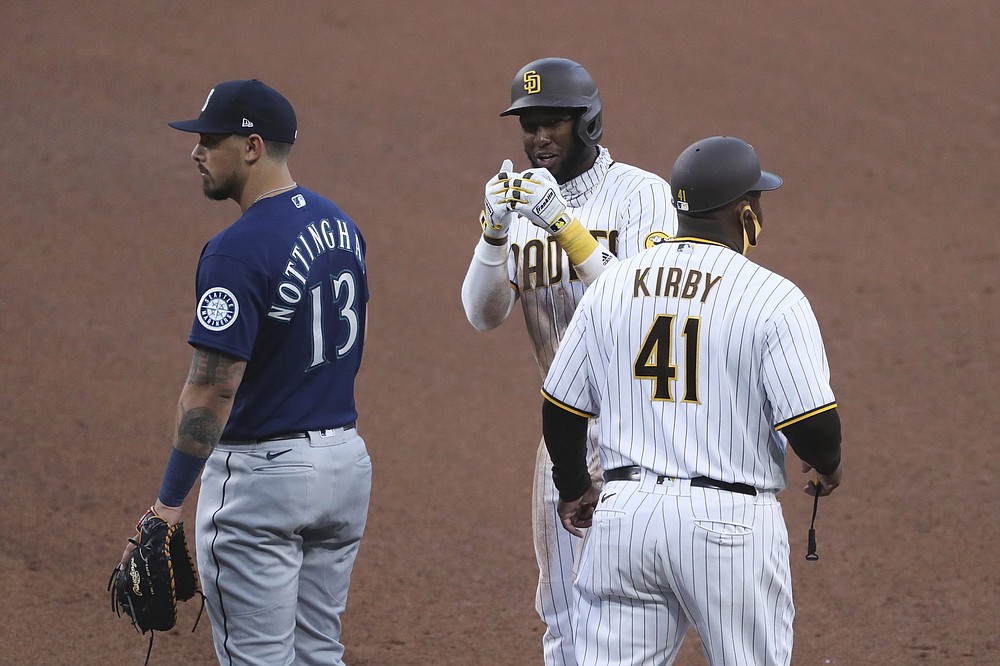 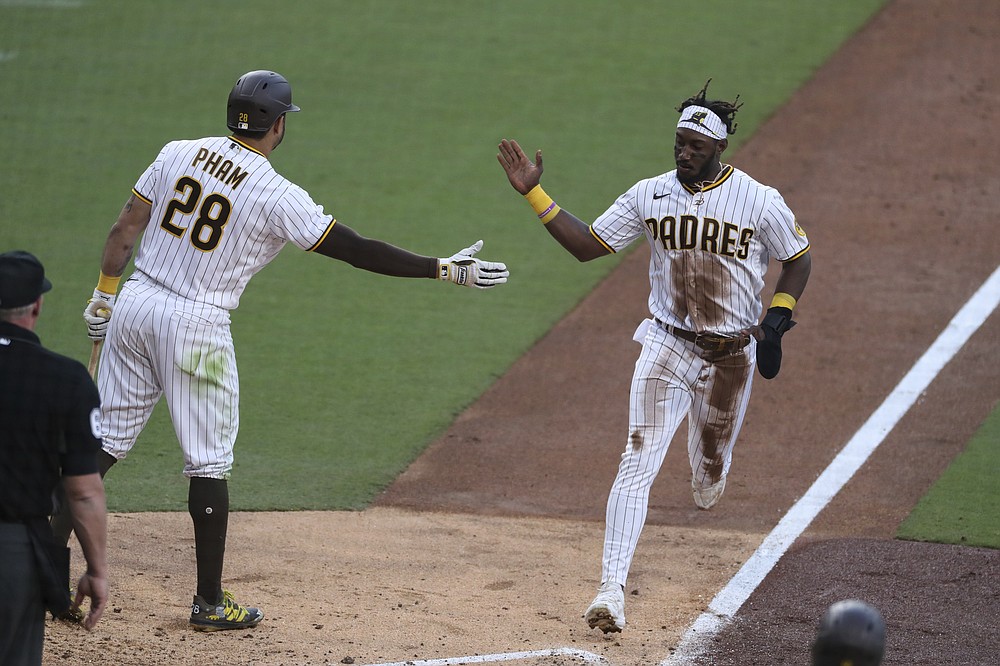 San Diego Padres' Jorge Mateo, right, is congratulated by Tommy Pham (28) on a steal of third base and scoring on a throwing error by Seattle Mariners catcher Tom Murphy during the fifth inning of a baseball game Saturday, May 22, 2021, in San Diego. (AP Photo/Derrick Tuskan) 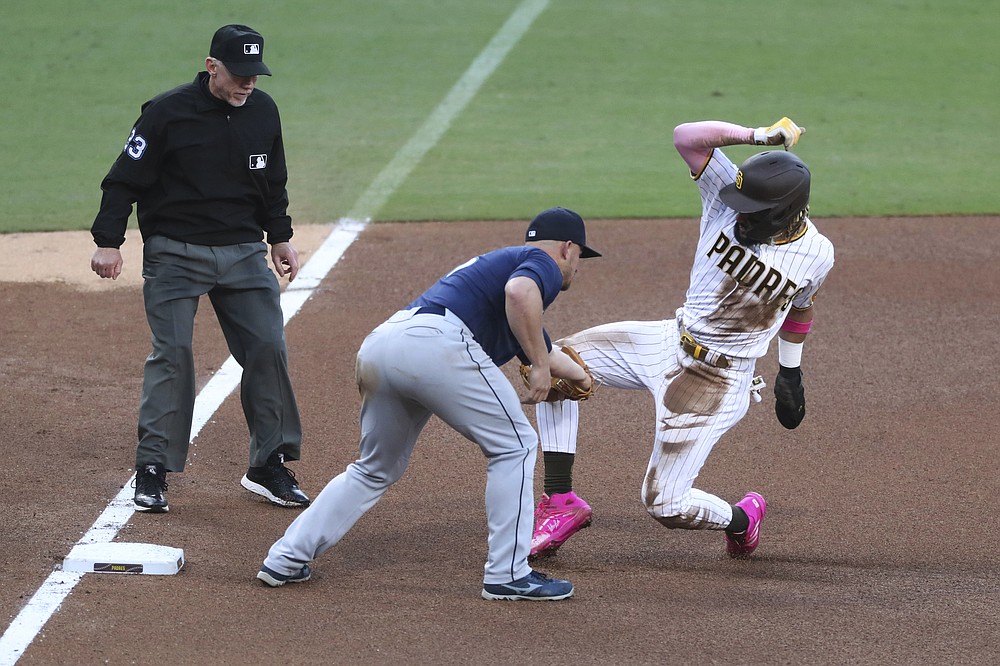 San Diego Padres' Fernando Tatis Jr. is tagged out by Seattle Mariners' Kyle Seager on an attempted steal of third during the fourth inning of a baseball game Saturday, May 22, 2021, in San Diego. (AP Photo/Derrick Tuskan)
ADVERTISEMENT