'We don't have all the answers'

Searcy district’s Teacher of the Year is a ‘lifelong learner’ 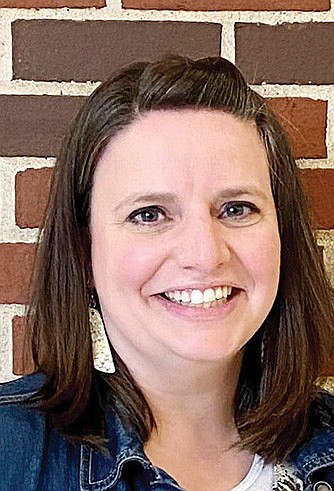 Kyla Glasser is someone who needs to know “the why” of how things happen in the world, and science lets her experience that.

“I have continued to be a lifelong learner since I have been teaching school,” she said. “Science is constantly changing, with bigger and better explanations, and I love it.

“I love everything about science.”

Glasser, an eighth-grade science teacher at Ahlf Junior High School, was recently named District Teacher of the Year for the Searcy School District.

“It means a lot to me,” she said. “I work really hard for my students to feel successful, and I want them to enjoy coming to my class.

“For me to be recognized by my district, it means they are seeing that, too. It gives me some solidity for what I do in the classroom.”

“Kyla Glasser is a highly effective teacher who engages students in learning activities through innovative practices,” said Diane Barrett, Searcy School District superintendent. “She has a genuine rapport with students, assists with extracurricular activities and seeks ways to grow her professional knowledge for the benefit of her students.

“She is truly a student-centered teacher.”

“It’s OK to not know all the answers,” she said. “That’s the one big thing we have been talking about recently — that we don’t have all the answers, but we need to be better about all the knowledge that we bring in.”

Her first year of teaching was in the Lonoke School District.

Glasser comes from a long line of educators, including her mom, Mona Diles. Glasser said she loved helping her mom grade papers, something she now hates doing for her own students.

“But as a little girl, I loved it,” she said. “I loved helping her set up her classroom, but I just didn’t know what subject I wanted to teach.”

It wasn’t until Glasser had David Collins as a science teacher at Harding Academy that she knew what subject she wanted to pursue.

“He was my science teacher, and he opened my eyes and doors [to see] that is the kind of teacher I want to be,” Glasser said. “I want to teach science, and I want people to love coming to my classroom, because it meant that much to me.”

She said that for years, she would have Collins be a guest speaker in her classroom. She said he was one of her mentors, and she wanted to follow in his path.

“He was very lab-driven, and I am a kinesthetic learner, where I have my hands in the middle of stuff and get messy. That’s how I learn,” she said. “He was kind of inspiring, and he lit up the room as a teacher.”

She said he was also her basketball coach, and he was very good about building relationships and teaching content. Collins is now the executive vice president at Harding University.

“[Kyla Glasser] and I have stayed in close contact, going all the way back to when I had her in class, back in the late ’90s,” Collins said. “She was one of the most enthusiastic learners I had.

“She was always excited about the type of learning, and she was able to take that same style of teaching into her own classroom.”

Collins said it is always an honor, as a teacher, to see former students be successful in the same profession.

“For her to be selected [as District Teacher of the Year], I share in her joy,” he said. “She was such a good student, and she is an excellent teacher.

“If she considers me as someone who pointed her in that direction, that’s a great honor for me.”

Ironically, Collins’ wife, Beth, is an English teacher for Searcy, and Glasser and Beth share a wall at the junior high school.

“That has helped in a lot of ways for us to stay connected,” Collins said. “I get to hear about the things she is doing from my wife.

“She comes home with all the stories — that is a neat thing.”

Glasser has lived in Searcy since she was 5 years old and graduated from Harding Academy in 2000. She earned a bachelor’s degree in elementary and middle-level education from Harding University in 2004. She received a master’s degree in school counseling in 2008.

“I love this community,” she said. “I got to experience the private-school part, and now I am experiencing the public school.

“It is a close-knit, small community that loves its people. At Searcy, I have constantly felt supported in what I was doing, and I wanted to stay in that type of environment.”

According to a release from the school, Glasser currently serves on the Capturing Kids’ Hearts Team, acts as the school’s student-government sponsor and leads a number of extra projects on campus.

“Capturing Kids’ Hearts works on building relationships with students,” she said. “We greet students at the door and build social contracts, or rules of the classroom, for how we want to behave and treat each other.

“I’m on a committee that helps support other teachers in the building. Last year, I wrote postcards to every student that I had and am currently writing a note card to every single one of them about the good I have seen in them.

“I want to encourage them and let them know I am here for them, no matter what.”

Cristy Farley is the library media specialist for Ahlf Junior High School but taught science alongside Glasser for six years prior to moving to the library.

“She is just a standout teacher,” Farley said. “She always goes above and beyond in her teaching.

“She is constantly looking for new and creative ideas to teach her content. She works tirelessly — 12 months a year — coming up with new and creative ways, and she is very involved with extracurricular [activities].”

The two have become close friends during their nine years of working together.

“We laugh and say it is a God-ordained relationship,” Farley said. “We reach each other’s minds and finish each other’s sentences.

“It is a natural friendship. We have adopted her family, and they have adopted us. It was just two puzzle pieces that fit together really well that bled over to our personal life.”

Glasser and her husband, Daniel, have four children together: Samuel, Gabe, Gracen and Rhett. Samuel is in the eighth grade and is in his mom’s class. She said she wanted her classroom to be as normal as it possibly could be this year because she didn’t want him, or anyone else, to feel like that they had missed out because of COVID-19.

“I gave my students gloves, and I disinfected everything,” she said. “There were a few labs that I had to take out, but I really worked to make my classroom look as normal as possible.”

Glasser said she had 30 virtual students this year, but she would have them join a lab group at school through Google Meets so they could watch the demonstrations live.

“I also record videos and have them watch me give demonstrations,” she said. “I’m still teaching, still interacting and maintaining social distancing because I want my students to experience what it is like to be in my classroom.”