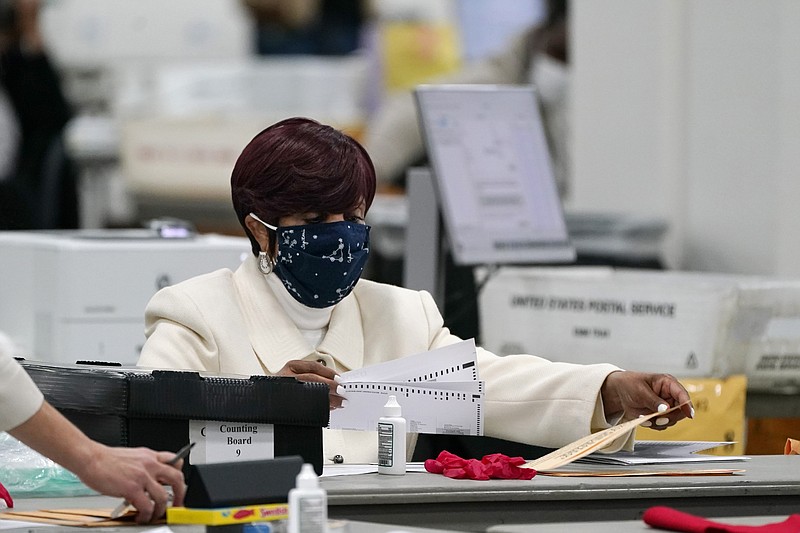 FILE - In this Nov. 4, 2020 file photo, absentee ballots are processed at the central counting board in Detroit. This year, Republicans across the country have zeroed in on mail voting and enacted new limits on a process that exploded in popularity during the pandemic. (AP Photo/Carlos Osorio, File )

ATLANTA -- When citizens in Florida and Georgia want to vote by mail in next year's races for governor, they will have to make sure they take one more step to ensure they receive ballots: providing their identification.

Just two states had ID requirements in 2020 for voters requesting mailed ballots. This year, Republicans across the country have zeroed in on mail voting and enacted new limits on a process that exploded in popularity during the coronavirus pandemic.

In addition to Florida and Georgia, legislation to require additional identification for mail voting was introduced in Arizona, Louisiana, Michigan, Minnesota, New Hampshire, Ohio, South Carolina and Texas, according to information compiled by the Voting Rights Lab, which advocates for expanded voter access.

Critics say adding ID requirements to request mailed ballots is not only unnecessary but also creates one more opportunity for voters to make mistakes that could leave them unable to vote absentee. Identification, they say, is already required when registering to vote and when voting in person for the first time.

When ID also is required to cast a mailed ballot, as is now the case in Georgia, critics say it will only result in more ballots being rejected. It also is expected to disproportionally affect poor, minority-group and college-age voters -- groups more likely not to have IDs or to have IDs with different addresses.

A Republican proposal in Michigan has drawn particular concern from Democrats because it would require voters to submit printed copies of their IDs when requesting mailed ballots. Although the state's governor, a Democrat, is likely to veto any voting restriction, the state has a unique process that could allow this and other voting bills to become law if enough citizens petition for it and the GOP-controlled Legislature passes it.

Michigan Secretary of State Jocelyn Benson, a Democrat, has pushed back against GOP claims that IDs are more secure than the current process, which relies on matching voters' signatures on ballot applications or return envelopes to the signatures on file at the election office.

The Michigan Senate's majority leader, Republican Mike Shirkey, has said voters favor ID requirements and that it was important to ensure registered voters are Michigan residents. "The best way to do that is through a state-issued ID," he said.

Benson noted that 130,000 of some 7 million registered voters in Michigan don't have state IDs or driver's licenses. Detroit Mayor Mike Duggan, a Democrat, said one-quarter of Black residents in his city don't own vehicles, and many don't have printers at home.

"This is what is wrong: They have constructed a series of bills that a poorer family without computers, without a car, has a far harder time voting than the other families," Duggan said. "This is voter suppression at its core."

Voter ID requirements have long been a flashpoint in the battle over voting, with past efforts focused on rules surrounding in-person voting. As of 2020, 36 states had ID requirements for voting at polling places, according to the National Conference of State Legislatures.

Most allow a wide range of nonphoto identification such as bank or utility statements. Many states allow voters to sign affidavits under penalty of perjury that they are who they say they are.

Democrats have said they are not opposed to ID requirements as long as multiple forms of identification are accepted and there is an option for voters to sign affidavits should they not have IDs or forget to take them to the polls. Federal legislation being pushed this year by Democrats in Congress would make an affidavit mandatory in any state with a voter ID law.

Information for this article was contributed by Kate Brumback and David Eggert of The Associated Press. 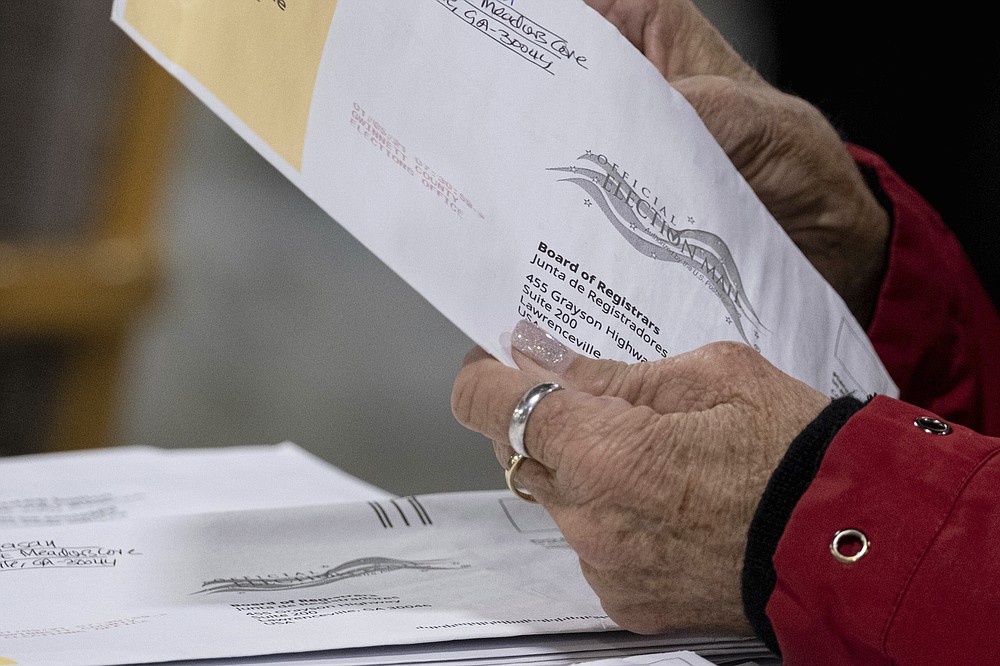 FILE - In this Jan. 6, 2021 file photo, workers at the Gwinnett County Georgia elections headquarters process absentee ballots for Georgia's Senate runoff election in Lawrenceville, Ga. When voters in Florida and Georgia request mailed ballots next year, they will have to make sure they do one more thing before sending it in: provide proof of identification. (AP Photo/Ben Gray, File) 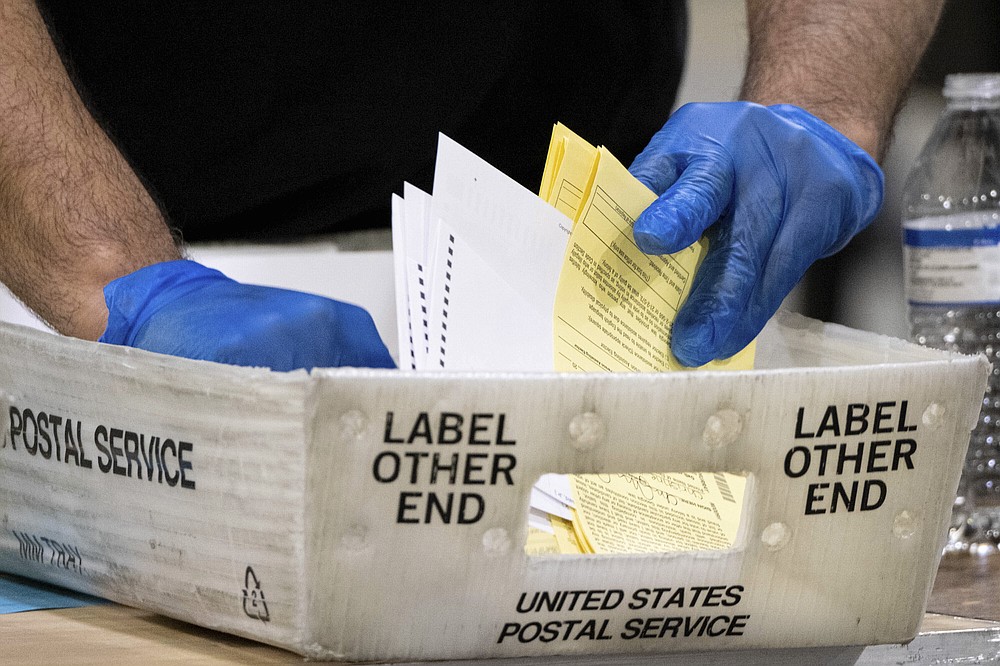 FILE - In this Jan. 5, 2021 file photo, Fulton County Georgia elections workers process absentee ballots for the Senate runoff election in Atlanta. When voters in Florida and Georgia request mailed ballots next year, they will have to make sure they do one more thing before sending it in: provide proof of identification. (AP Photo/Ben Gray, File) 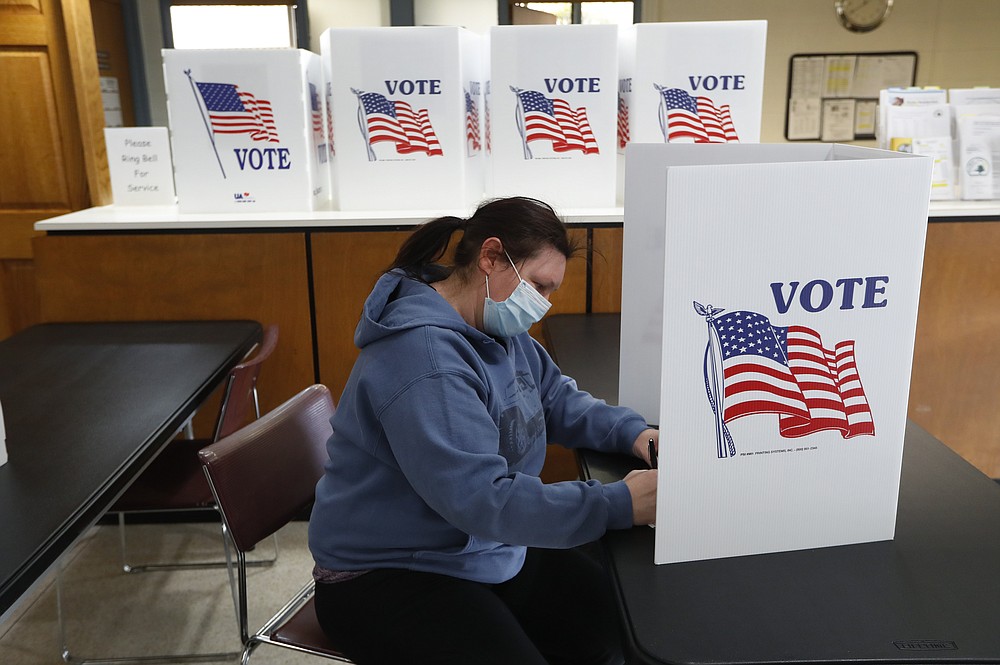 FILE - In this May 5, 2020 file photo, Angela Beauchamp fills out an absentee ballot at City Hall in Garden City, Mich. This year, Republicans across the country have zeroed in on mail voting and enacted new limits on a process that exploded in popularity during the pandemic. (AP Photo/Paul Sancya)
ADVERTISEMENT