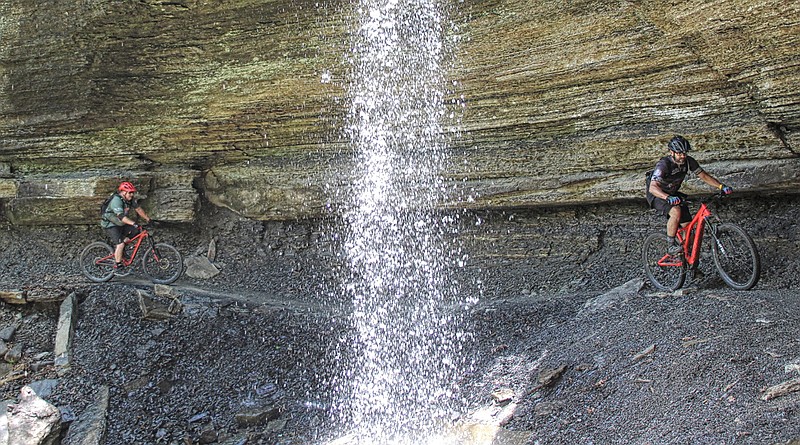 On the Devil’s Racetrack Trail, cyclists pass behind a 30-foot waterfall. With the addition of a Monument Trail system that opened May 6, Devil’s Den State Park offers 19 miles of mountain biking trails. The 12-mile Monument Trail system is also designed for hiking. (Special to the Democrat-Gazette/Bob Robinson)

If you are a mountain biker or hiker, put down the newspaper right now, and pack your gear. One of your passengers can finish reading this article once you are on the highway. You do not want to delay departure any longer than necessary.

Devil's Den State Park held the grand opening for Arkansas' fourth Monument Trail on May 6. This trail system is destined to be the most visited and the most talked about trail in Arkansas during 2021. From challenging rock features, super-fast descents, scenic views, rugged bluff lines, waterfalls and unspoiled natural forest, it has it all.

The Monument Trail network is the work of the Arkansas Parks and Recreation Foundation (see arkansasonline.com/524rec). In keeping with executive director Suzanne Grobmyer's goal to construct trails that will "encourage visitors to not just ride the trail, but to take in everything natural the area offers," this trail is on target.

In October, before turning the first spade of dirt, the Rock Solid Trail Contracting crew scoured the hillsides of the 2,200-acre park in search of picturesque bluffs, interesting rock formations and other aspects of the terrain. Once these special areas were identified, the objective was to create a fun-to-ride network of trails to access them.

Contractor Aaron Rogers said he was impressed by the incredibly dynamic topography of the mountains within the park. The soils and rugged rock formations are unique to the area and provide the ideal building cubes needed for sustainable trails on the park's steep terrain.

Rogers challenged his crew to create trails that would highlight the area's special natural qualities. They knocked it out of the ballpark.

Representatives from the foundation, Arkansas State Parks and The Walton Family Foundation were present for the grand opening in Devil's Den State Park. With the park recognized as the "birthplace of mountain biking in Arkansas," everyone wanted to pay homage.

Tim Scott, the park's assistant superintendent, shared the legendary tale of how he and Wally Scherry, Scott's supervisor at the time, began noticing bicycles on the hiking trails within the park in the mid-80s. Many of the state's trails prohibited bicycles, but they saw an opportunity to expand their park's appeal.

Together, in 1988, they attended the Fat Tire Mountain Bike Festival in Crested Butte, Colo. They came home convinced that the hilly, rocky environment of Devil's Den was a perfect fit for mountain biking. The next year, the park hosted Arkansas' first mountain bike festival, and on the day after the fest, the state's first mountain bike race. The fest and the race evolved into separate annual events that remain popular to this day.

They set an example for other trails within the state to follow.

Riding the new Monument Trail at Devil's Den is more than just pedaling a bicycle in the woods; it is an exploration.

The trail is a conduit to bluffs, waterfalls and other natural features you would seek if you were exploring the area with a topo map and compass. Thanks to Rock Solid's craftsmanship, we get to find these special places from the seat of our mountain bikes and enjoy a great deal of adrenaline-pumping excitement in the process.

Cyclists are able to begin their adventure from the trailhead at Campground Loop A. However, I prefer starting at the westernmost end of Devil's Racetrack Trail on Arkansas 220, just past the Horse Campground. The park plans to construct a parking lot there later in the year.

Devil's Racetrack Trail originates on the banks of Ellis Branch. The flat open meadow that follows is a perfect setting for warming up your legs. Plus the rock gardens allow riders to hone their handling skills before they encounter the more exposed bluff areas.

Next, the trail passes Campgrounds D and E before crossing Arkansas 220 to begin the mountainside climb. Cyclists ride over an abandoned bridge and then ascend just below the overlook on Arkansas 170. Both classic stone structures were constructed during the Great Depression by the Civilian Conservation Corps.

At that point, cyclists will begin a signature Devil's Den experience that sets it apart from other trails in the state.

The trail routes riders so close to the jagged bluffs that, after a rain like that experienced on opening day, droplets falling from the bluff will splat upon riders' helmets. Farther along, Racetrack snakes through this drip canyon, between the bluff and falling water.

The trail continues to follow the bluff, using natural rock ledges and crevices or, where nature did not provide such structures, using skillfully constructed rock pathways.

This is not a world bicycles normally visit, but creative engineering and craftsmanship make for a fun, adventurous ride.

The trail passes a turn for Gold Brick Trail, which leads to the trailhead at Campground A. Bypassing this exit, Racetrack continues to hug the bluff line, routing cyclists into a horseshoe alcove and behind a 30-foot waterfall. Photos of cyclists skirting along the cliffs behind the waterfall are sure to pop up in profile pictures across social media platforms.

The Monument Trail system continues paralleling the original trail network, only far higher up the mountainside, on trails like Dollar-a-Day, All You Can Eat and We Can Take It. Scott explained these names were inspired by common expressions used by the CCC workers in the '30s.

As cyclists continue across Lee Creek and ride the long, steep climb up the park's eastern mountainside, they get up close and personal with yet more picturesque bluffs and crevices. The trail weaves through several narrow, natural passageways that have riders ducking and dodging to protect elbows and knees from jagged ledges mere inches away.

When it is time to begin the long descent, riders have the option of taking an intermediate rated singletrack path named Sparky, (after CCC worker Herman "Sparky" Edgin) or a more technical downhill trail designed to satisfy a request made by park officials.

Rogers explained that the park wanted him to create a downhill run longer than those found on Northwest Arkansas trails — at a minimum, a 90-second descent, loaded with drops, gnarly rocks and other challenging structures, to test a bicycle's suspension and handling. Their goal was to entice manufacturers to take their bikes to Devil's Den to be tested.

Scott named this trail after another CCC worker, Orville Taylor. From the stories he had about Taylor and his mischievous activities, it seemed appropriate to name the park's only black diamond trail Orville. (For instance, Taylor convinced each of his barrack mates to pay him 10 cents to rise early enough in the morning to stoke the fireplace so the room would be warm when they climbed out of bed.)

With the addition of the 12 new Monument Trail miles, the park now includes 19 miles of prime mountain bike trails — more than enough to make this a mountain bike destination.

Although these trails may be somewhat intimidating on your initial ride, this is the style of trail that the more you ride it the more comfortable and fun it will become. You will also learn to recognize the "secret," more challenging lines before passing them by, for a little added adrenaline rush.

NOT JUST FOR BIKERS

On the Saturday after the grand opening, I returned to Devil's Den to lead members of the NWA Hiking Meetup Group on a hike.

Although the downhills were not as adrenaline-charged as they had been on my bicycle, it proved to be a great hike. Everyone appreciated the natural features the trails exposed. While progressing at the slower, hiker pace, I had even more opportunities to enjoy the views down the Lee Creek drainage.

Steven Parker, president of the Ozark Highlands Trail Association, said this trail was the first so-called "multi-use" trail he has experienced that is actually suited for hikers. Drops and other challenging cycling features found at other such trails usually become obstacles for hikers, but not here.

As we navigated through the tight passageways and around huge boulders, several group members expressed their disbelief that anyone could ride a bicycle on the trail.

We paused for lunch atop a ridge at an open bluff clearing. The view several hundred feet below into the Lee Creek basin reminded me of a popular view on the Buffalo River Trail that peers down into the Steel Creek Recreation Area.

Once again, I thought to myself what a great time it is to be a hiker and mountain biker living in the Natural State. 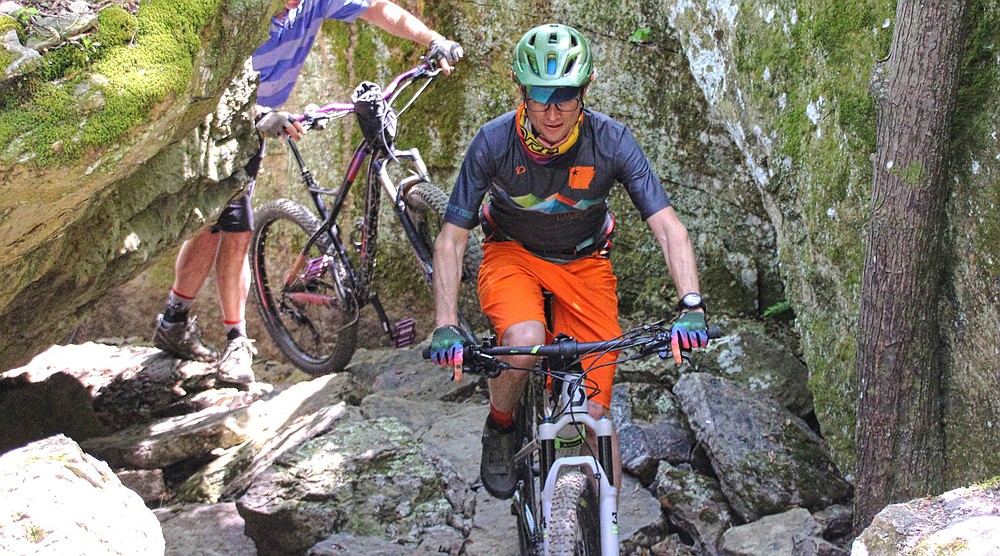 Weaving through stone passages in places, the Monument Trails in Devil’s Den State Park present a variety of challenges. (Special to the Democrat-Gazette/Bob Robinson)