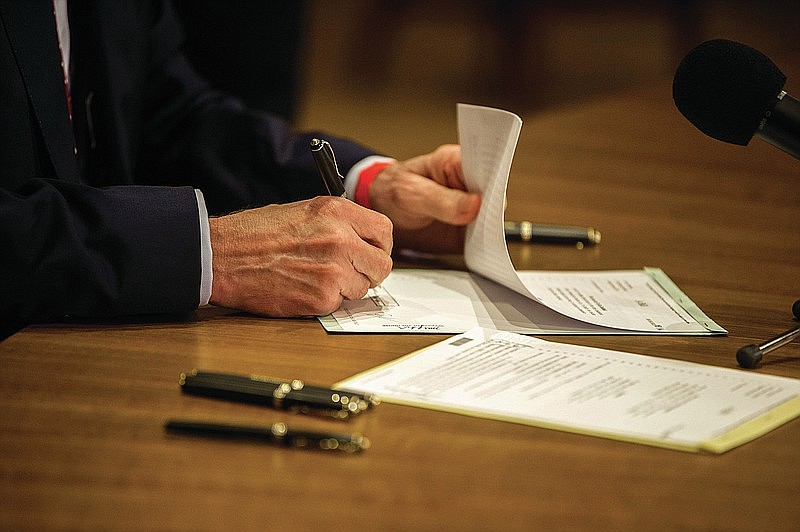 Hutchinson allowed seven bills to become law without his signature this year, including one that allows a governor to block state and local governments or any entity that receives state funds from following presidential executive orders that would use state resources and personnel.

When the Legislature sends a bill to the governor, he has three options under the Arkansas Constitution: sign it, veto it, or let it become law without his signature.

A simple majority vote in the 35-member Senate and 1 0 0 - mem - ber House is required to override his veto, so letting a bill become law without his signature is often viewed as disapproval but short of a veto.

“I evaluate each bill on its merits, and I try to use the veto pen sparingly, but as needed, when a bill does harm,” Hutchinson said in a written statement.

“I also consider whether the veto will make a difference. I allow a bill to become law without my signature if I just want to express my disagreement. I am satisfied that I struck the right balance this session.” The 93rd General Assembly this year enacted 1,112 laws in its regular legislative session that started Jan. 11. The session entered an extended recess April 28 and lawmakers will reconvene this fall to redraw congressional district boundaries.

The vast majority of bills were signed by the governor. Hutchinson also vetoed three bills and the Legislature overturned one of his vetoes.

Act 608 allows the governor to block presidential executive orders from being carried out. The law, which takes effect July 28, started as House Bill 1637 by Rep. DeAnn Vaught , R-Horatio.

Hutchinson, who is an attorney, said he didn’t sign HB1637 because it is unconstitutional.

But Vaught, a farmer who is the chairwoman of the House Committee on Agriculture, Forestry and Economic Development, said she doesn’t believe the measure is unconstitutional.

Under Act 608, the Legislative Council or Joint Budget Committee will refer a presidential executive order to the appropriate legislative committee that would address the subject matter of the executive order.

The standing committees would advise the Legislative Council or Joint Budget Committee whether the state should sue over the order.

In explaining why he let the bill become law without his signature, Hutchinson said in a written statement that the measure “places the Attorney General as the authority on whether or not a Presidential Executive Order is constitutional.” In addition, if the General Assembly decides to adopt a finding by the attorney general that an executive order is unconstitutional, the bill amounts to a nullification of the executive order, the Republican governor said.

“The mechanism for challenging the constitutionality of an executive order or law is through the courts, not a standing committee of the Legislature or the opinion of the Attorney General,” said Hutchinson, who is a former congressman, U.S. attorney, federal Homeland Security undersecretary and U.S. Drug Enforcement Administration director.

Vaught said she proposed the legislation at the request of constituents, who are concerned about executive orders by President Joe Biden and then-President Donald Trump.

“It had nothing to do with just Biden,” she said.

“All we were doing was allowing whoever the attorney general is to look at the executive orders, bring it to [the Legislative Council] and explain … how it would be implemented in our state and if we would use any state funds to implement it,” she said. “All we are saying is would we use our people’s tax dollars to do any kind of the implementation of it.” HB1637 zipped through the Republican-dominated Arkansas Legislature.

On March 18, the House of Representatives voted 75-3 to approve the bill with 16 representatives not voting and six voting present.

On April 1, the Senate voted 27-7 to approve the bill with one senator not voting.

Attorney General Leslie Rutledge said, “At the Attorney General’s Office, we review all executive orders and sometimes those require swift legal action which result in litigation.”

Under the measure, if the report of child maltreatment or suspected child maltreatment alleges abuse as defined under Arkansas Code Annotated 12-18-103, the alleged offender may, for the purpose of seeking a second opinion, request that the alleged victim be examined by a licensed health care provider. The provider will have to routinely provide medical care to pediatric patients and not have performed the initial examination, test or procedure.

The alleged offender may request that the health care provider determine whether the alleged victim has rickets, Ehlers-Danlos syndrome, osteogenesis imperfecta, vitamin D deficiency or another medical condition that may appear to be caused by suspected abuse or increase the risk of a misdiagnosis of suspected abuse.

The law states that the examination “shall not be requested for the purpose of obtaining a second opinion on whether or not the alleged victim has been a victim of sex abuse.” Hutchinson said he didn’t sign the bill “because of the trauma it may inflict on a child who is the suspected victim of abuse.

“Under this law, the accused abuser may request that the child undergo an additional examination by a medical provider.” Brown said the measure doesn’t allow for a second opinion in cases of sexual abuse, and officials for the state and a hospital provided some of the language for the measure. She said she proposed the bill in part because of a case in which there was a strong possibility that a child was misdiagnosed as a victim of physical abuse.

The measure bars the state’s 15 executive branch departments from teaching, instructing or training any employee, contractor, staff member or any other individual or group to adopt or believe “any divisive concepts,” effective Jan. 1, 2022.

Hutchinson said he didn’t sign the bill because “it addresses a problem that does not exist” and places a burden on state agencies to promulgate rules and an instruction program that is unnecessary.

Garner said the governor “is dead wrong” because this issue is becoming a problem across the nation and the measure is a pro-active step to head off the issue in state departments.

The measure prohibits the governor from limiting religious services in a way that is not “applicable to all organizations and businesses.” In a transmittal letter to the House, Hutchinson wrote that “churches and religious institutions are specifically excluded from [any covid-19 directives] that could be interpreted as applicable to them.

“The language of this bill, particularly the emergency clause, suggests the response of the executive branch to COVID-19 ‘highlighted the need to address the constitutional rights of the citizens of Arkansas, particularly the right to free exercise of religion.’ This statement could not be more inaccurate.” Bentley said that she disagreed with the governor and her constituents felt like the churches were being targeted.

The measure prohibits the Health Department and Alcoholic Beverage Control from penalizing businesses if their customers flout public health directives during a public health emergency.

Hutchinson said he did not sign the bill “because the emergency clause of this bill inaccurately portrays the enforcement of COVID-19 directives by the Alcoholic Beverage Control Division and the Arkansas Department of Health as unfair.” Hammer said he disagreed with the governor and with sanctioning businesses for the actions of their patrons.

The measure will require that absentee ballots be submitted in person to the county clerk’s office no later than the Friday before the day of the election.

Under current law, those ballots must be turned in the Monday before an election. The new law doesn’t change the deadline for mailed-in ballots, which is Election Day.

Hutchinson said the measure unnecessarily limits the opportunities for voters to cast their ballot prior to the election.

Hammer said he disagreed with the governor and the measure doesn’t make it more difficult for voters, who can drop their absentee ballots in the mail.

The measure will create a process by which the Legislature can review election issues through its Joint Performance Review Committee.

Hutchinson said he allowed the bill to become law without his signature because “it amounts to a takeover of the review of all elections by the Joint Performance Review Committee of the General Assembly.” Hammer said he disagreed with the governor and the Legislature should look into matters of public interest.

The number of bills that Hutchinson has allowed to become law without his signature has changed in each regular session since he became governor.

The number of laws enacted without a governor’s signature has varied over the past 2½ decades.

During the 2013 regular session, then-Gov. Mike Beebe, a Democrat, let three bills become law without his signature. The Republican-controlled Legislature overrode three of his vetoes.

Then-Gov. Mike Huckabee, a Republican, allowed 18 bills to become law without his signature in the 1997 regular session, and the Democratic-controlled Legislature overrode 10 of his vetoes.