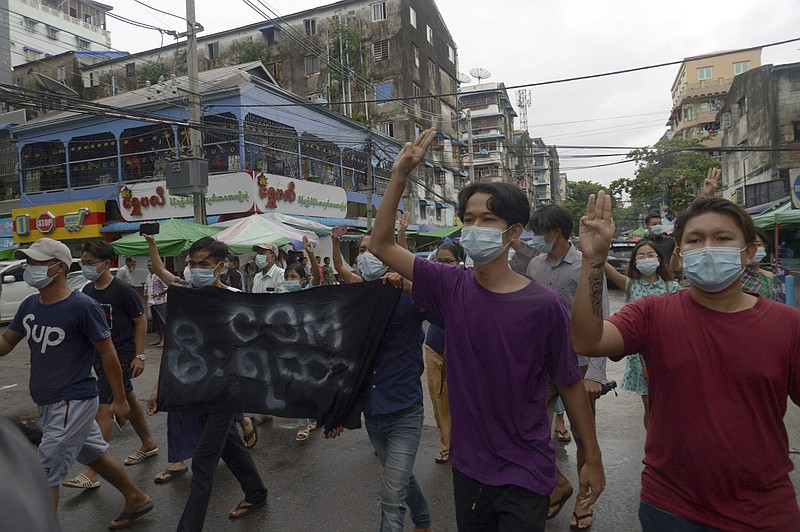 Anti-coup protesters flash the three-finger salute during a demonstration against the military takeover, in Yangon, Myanmar, Monday, May 24, 2021. (AP Photo)

BANGKOK -- Burma's ousted leader, Aung San Suu Kyi, made an in-person appearance in court Monday for the first time since the military arrested her when it seized power Feb. 1.

Burma's MRTV broadcast on its evening news program the first photo of Suu Kyi, 75, since the coup. It showed her sitting in a small courtroom, her hands folded in her lap. Alongside her were her two co-defendants, former President Win Myint and Myo Aung, the former mayor of Naypyitaw, Burma's capital.

One of their lawyers, Min Min Soe, told The Associated Press by phone that the three were able to meet with their defense team for about 30 minutes before the hearing began at a special court set up inside Naypyitaw's City Council building.

Suu Kyi's only previous court appearances have been by video link, and she had not been allowed to meet in person with any of her lawyers.

Min Min Soe said Suu Kyi wanted to tell Burma's people that her National League for Democracy party will stand by them.

She said that "since the [National League for Democracy] was founded for the people, the [party] will exist as long as the people exist," Min Min Soe said after the hearing. She appeared to be referring to the ruling junta's threat to dissolve the party.

"I also hope the [National League for Democracy] will survive because this is the will of the people," she said during a virtual news conference at U.N. headquarters in New York, noting that the party received 82% of the vote in November's election.

Khin Maung Zaw, head of Suu Kyi's legal team, said that "she seems fit and alert and smart, as always."

Thein Hlaing Tun, a lawyer representing Myo Aung, was arrested after the hearing on a charge of spreading information that could cause unrest.

Monday's hearing was largely procedural. The defense lawyers said their discussions with Suu Kyi involved all the charges against her. State television said the hearing concerned the charge against all three defendants of spreading information that could cause public alarm or unrest.

Suu Kyi also faces counts of violating the Natural Disaster Management Law by flouting covid-19 pandemic restrictions during the 2020 election campaign; of illegally importing walkie-talkies that were for her bodyguards' use; and of unlicensed use of the radios.

The most serious charge that Suu Kyi faces is breaching the colonial-era Official Secrets Act, which carries a penalty of up to 14 years' imprisonment, but that is being handled by a separate court.

Suu Kyi's supporters say the proceedings are politically motivated and are meant to discredit her and legitimize the military's seizure of power. If convicted of any of the offenses, she could be banned from running in the election that the junta has pledged to hold within one or two years of its takeover.

Also on Monday, an American journalist working for a Burmese news magazine was detained at Rangoon's airport as he was preparing to board a flight to Malaysia. Frontier Myanmar said it does not know why its managing editor, Danny Fenster, was detained. The junta has arrested about 80 journalists, roughly half of whom remain detained while awaiting charges or trial. 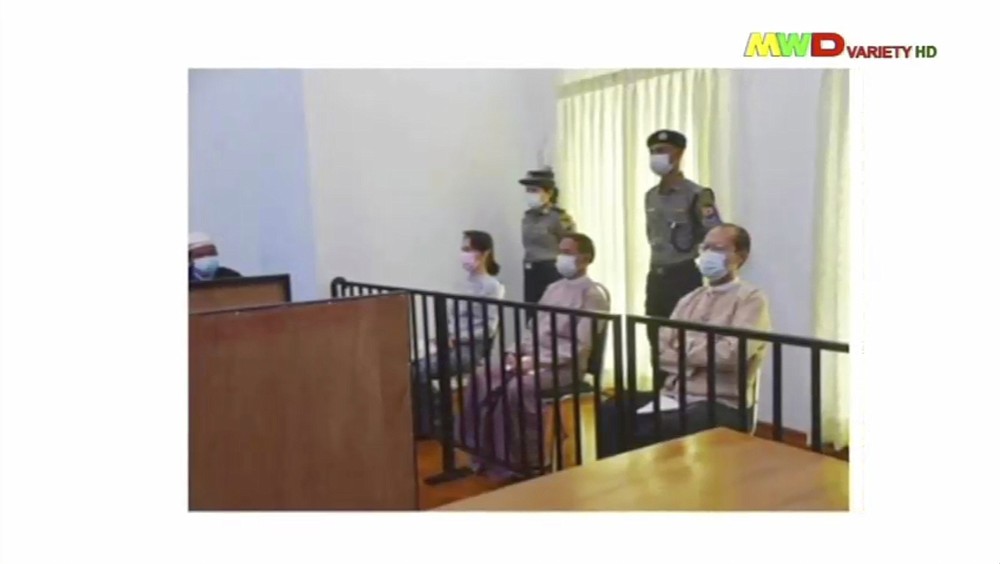 In this image from Myawaddy TV, a photograph shown during a news report showing the appearance of deposed Myanmar leader Aung San Suu Kyi, former President Win Myint, sitting 3rd from right, and former Naypyitaw Council chairman Dr. Myo Aung before a special court, shown while a report about Suu Kyi's case is read by a news presenter Monday, May 24, 2021, in Naypyitaw, Myanmar. Myanmar’s ousted leader Aung San Suu Kyi has made a court appearance in person for the first time since the military arrested her Feb. 1. (Myawaddy TV via AP) 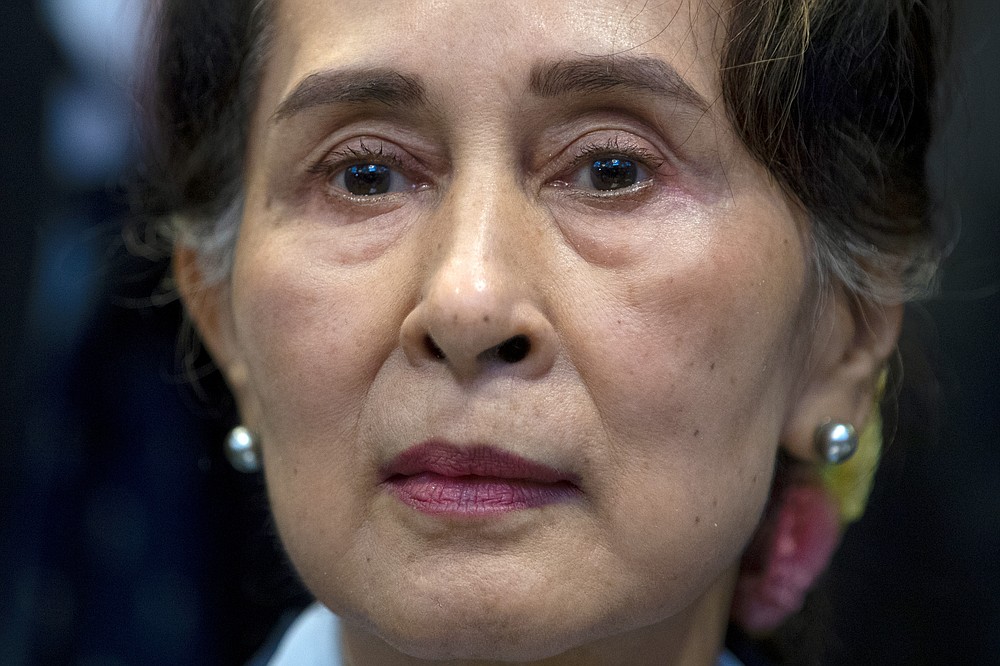 FILE - In this Dec. 11, 2019, file photo, Myanmar's leader Aung San Suu Kyi waits to address judges of the International Court of Justice on the second day of three days of hearings in The Hague, Netherlands. Myanmar’s ousted leader Aung San Suu Kyi appeared in court in person Monday, May 24, 2021, for the first time since the military arrested her when it seized power on Feb. 1, Myanmar media reported.(AP Photo/Peter Dejong, File) 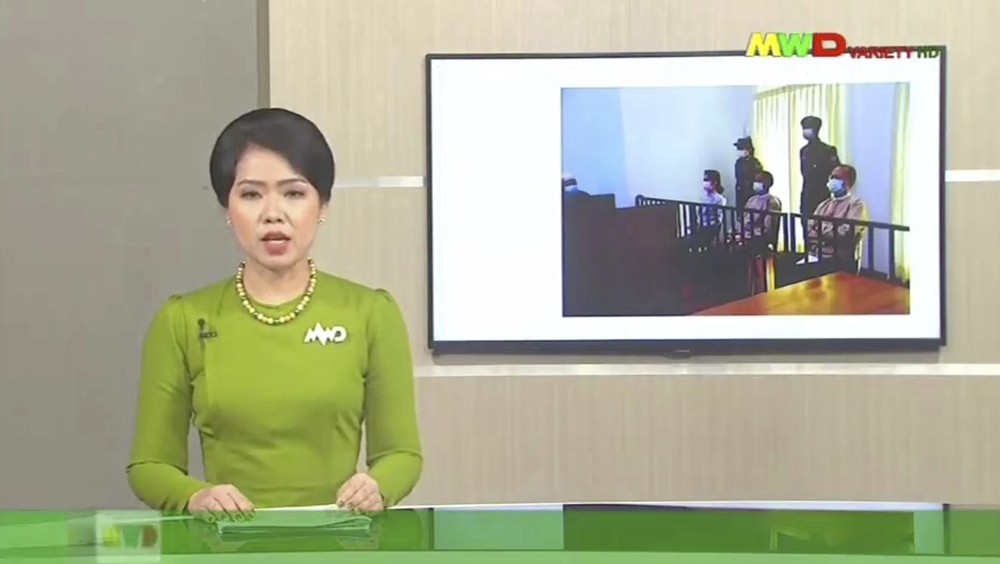 In this image from Myawaddy TV, a photograph of deposed Myanmar leader Aung San Suu Kyi's court appearance was shown during a report about her case is read by a news presenter Monday, May 24, 2021, in Naypyitaw, Myanmar. Myanmar’s ousted leader Aung San Suu Kyi has made a court appearance in person for the first time since the military arrested her Feb. 1. (Myawaddy TV via AP) 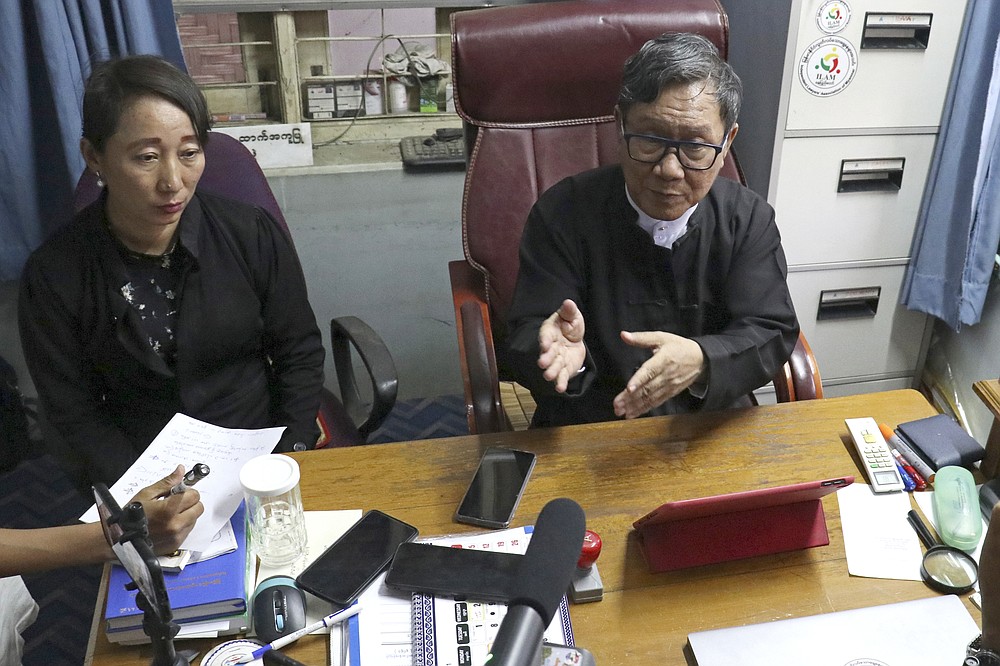