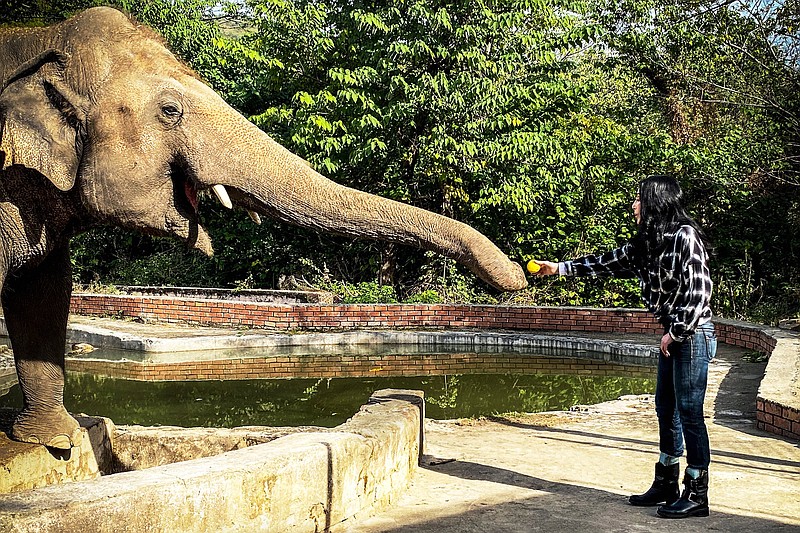 Superstar Cher feeds elephant Kaavan in a scene from “Cher & The Loneliest Elephant,” which premiered Wednesday and airs again today at 11 p.m. on the Smithsonian Channel. It’s available on demand from Smithsonian and Paramount+. (Smithsonian Channel via AP/Zoobs Ansari)

LOS ANGELES — Cher's rescue of an elephant long held in dismal conditions is a one-of-a-kind story, as would be expected from the singular star.

Even she was surprised by what her efforts — in concert with a team of animal welfare groups, wildlife veterinarians and Pakistan's legal system — achieved for Kaavan, she said during a panel discussion taping.

"'I don't know anything about this. I'm just an entertainer. I can't save this elephant,'" Cher recalled thinking when the animal's plight was brought to her attention by what she calls "the kids" on her Twitter feed.

They demanded Kaavan's release from a ramshackle, now-closed zoo in Islamabad, Pakistan, which launched the quest detailed in "Cher & the Loneliest Elephant," which debuted Wednesday on the Smithsonian Channel.

Cher accepted the challenge after seeing a photo of the 4-ton animal chained in a solitary, cramped enclosure and in apparent ill health — physical and emotional.

Recalling a brief meeting with businessman Mark Cowne and his interest in wildlife, she sought his help. The result was Free The Wild, an organization co-founded by Cher, Cowne, Gine Nelthorpe Cowne and Jennifer Ruiz to advocate for Kaavan, which turned into a four-year effort.

(Free The Wild's expanded mission is to "stop the suffering of wild animals in captivity" and gain their release to sanctuaries or better-equipped zoos, according to its website.)

Cher recorded a song, "Walls," to amplify the growing social-media clamor for Kaavan's release, and her involvement went far beyond her comfort zone: She flew to Pakistan amid the covid-19 pandemic when, she said, the government made it a condition of Kaavan's transfer to a sanctuary in Cambodia after the zoo's court-ordered closure.

Her trademark candor is on exhibit in the documentary, in which she admits to hesitation about the journey that she and a small group of intimates were about to make.

"I kept saying to my friends ... 'Are we really going to Pakistan? Is this really happening?'" she recounted during the panel discussion about her efforts and the documentary's production. "Then I just went, 'Yeah, come on, you're doing it. Stop playing around and just do it."

It wasn't just trepidation weighing on her, Cher said. There had been so many times that it looked like the effort would fall short that she honestly began to wonder if "anybody would be all that interested" in what was being attempted.

Her unstinting effort resulted in an endearing scene in which Cher is coaxed by veterinarian Amir Khalil to bond with Kaavan by feeding him watermelon and singing the elephant's favorite song: "My Way," made famous by Frank Sinatra.

The chart-topping pop star balked at the impromptu performance because she hadn't sung recently. The other reasons: The song choice, and her duet partner, the admirable but out-of-tune Khalil, who lovingly tended Kavaan during his daunting transfer to a new life.