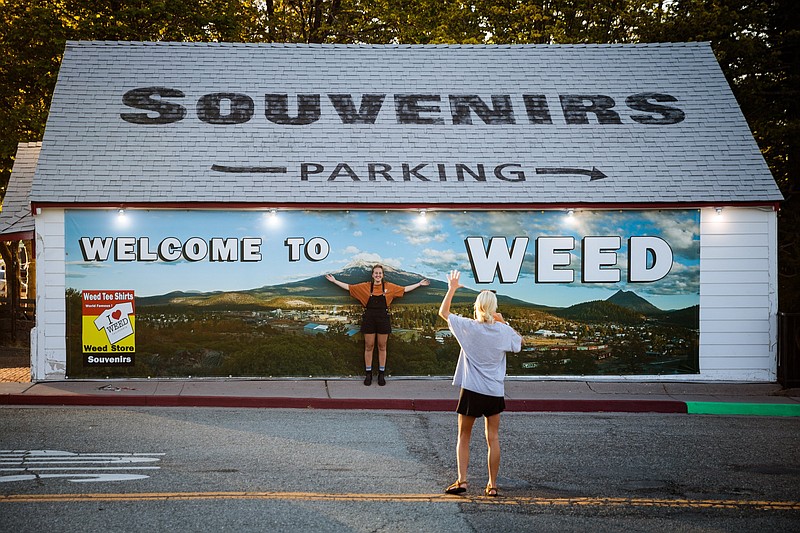 Traveler Madeline Pruneau of Denver has her photo taken in front of a sign welcoming visitors to Weed, Calif. For decades, the residents of Weed, a California lumber town an hour from the Oregon state line, have felt like the butt of jokes, exasperated from the repetition of the Daily Explanation: No, the town is not named for marijuana but a local 19th-century timber baron, Abner Weed. (The New York Times/Max Whittaker)

WEED, Calif. — When they see the signs for Weed, carloads of curious travelers veer off Interstate 5 to stop and gawk. They file into gift shops that sell "Weed Is So Dope" refrigerator magnets and sweatshirts advertising a fictional University of Weed: "A Place of Higher Learning."

For decades, the residents of Weed, a California lumber town an hour from the Oregon state line, have felt like the butt of jokes, exasperated from the repetition of the Daily Explanation: No, the town is not named for marijuana but a local 19th-century timber baron, Abner Weed. For years, the town rejected proposals to leverage the name and allow the sale of marijuana.

"I did not want a bunch of potheads sitting out in front of the store smoking doobies on a bench," said Sue Tavalero, a former hairdresser who is now mayor.

But Weed's leaders, including Tavalero, have since had a change of heart. The City Council cracked open the door to the pot industry three years ago, allowing a medical marijuana dispensary to open on Main Street.

Then last year, when a second dispensary opened, even as other businesses downtown suffered during lockdowns, Weed's leaders turned their timid embrace of marijuana into a full bear hug. In November, the City Council unanimously approved a plan for a sprawling facility on the edge of town with a capacity to grow 150,000 cannabis plants and employ 300 people. 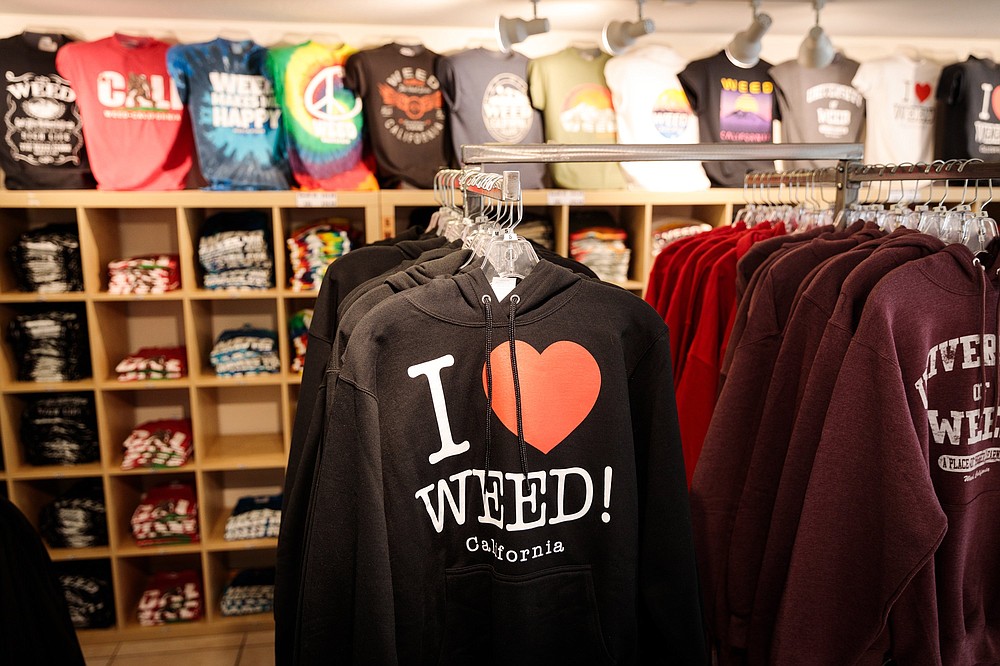 Souvenirs are popular items at The Weed Store in Weed, Calif. For years, the town rejected proposals to leverage the name and allow the sale of marijuana. (The New York Times/Max Whittaker)

Weed is by no means the only town in California to harbor ambivalence about cannabis. Overall approval in the state for legal marijuana runs high, but it often collides at the local level with not-in-my-backyard-style rejection.

Although most major cities in the state, including San Francisco, Los Angeles and San Jose, allow the sale of cannabis, smaller and more conservative cities like Bakersfield and Anaheim bar the drug from being sold.

Overall, some 70% of cities and towns in California do not allow dispensaries, according to Weedmaps, a website that hosts online reviews of cannabis businesses.

Weed is now making a bet that it can market not only its name but its location at the foot of the slopes of Mount Shasta, a dormant, snow-capped volcano with a passing resemblance to Japan's Mount Fuji. The city trademarked a logo that would be placed on packaging of its marijuana, a "Made in Weed" appellation akin to those used by Champagne or Parmigiano-Reggiano.

Raymond Strack, a cannabis entrepreneur who is behind the plans for the marijuana-growing facility, speaks of the "terroir" that Weed's weed will have, fed by the spring water that gurgles from the ground just outside of town, the same water that is sold under the brand name Crystal Geyser. 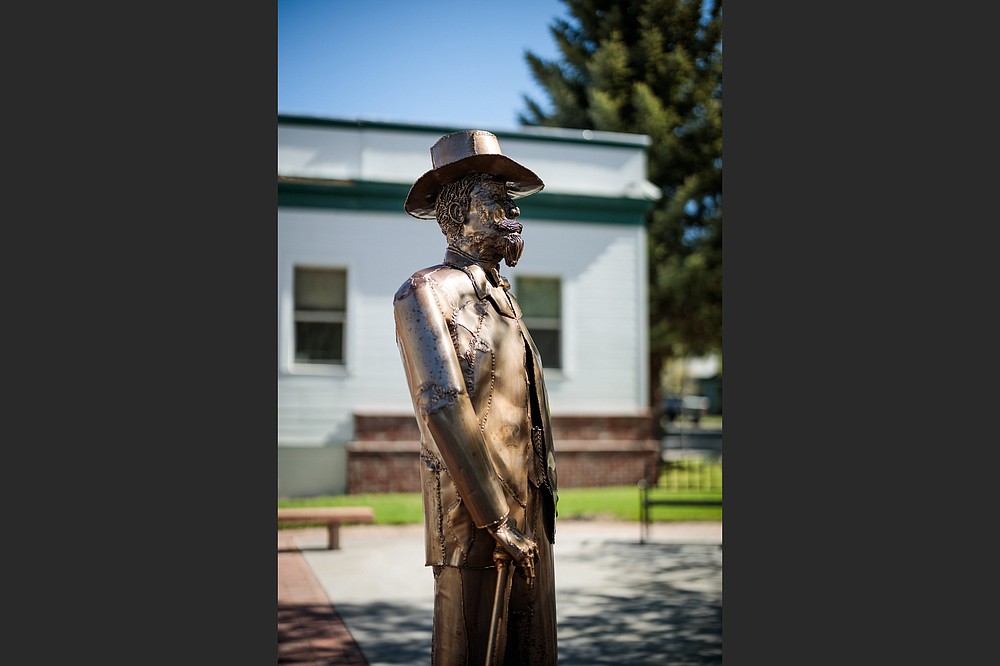 A statue of town founder Abner Weed looks out over downtown Weed, Calif. Would the 19th-century timber baron get a chuckle out of what his name has come to mean? (The New York Times/Max Whittaker)

There are still members of the community who believe that marijuana is the "devil's lettuce," Strack said. But they are increasingly hard to find.

Donna Winger, a former member of the planning commission, counts herself as one of the converts to the notion that cannabis could help lift the city's fortunes, even though she still harbors hope that the city can find a more "healthy and family-oriented" way to market itself.

"I've got to be candid with you," said Winger, a retired schoolteacher. "I would have liked something like a sunflower festival or a lemon pie festival.

"But we haven't stumbled upon an alternative at this point," she said.

Weed the town does not represent the California of the popular imagination. Amid thinning evergreen forests and cattle ranches, Weed can have the feel of an Appalachian coal mining community searching for a new industry to sustain itself. The timber business has been waning for decades, and the local mill employs a small fraction of the people it did in the town's lumber heyday.

Weed, with 2,700 residents, has a median household income of $31,000, less than half the California average. Many of the buildings on Main Street are in some form of disrepair. One resident recently scrawled on the front door, "Please Don't Break Glass. Times Are Tough Enough. Thank You."

Residents who were skeptical of cannabis often say they have been won over by the economic imperatives. 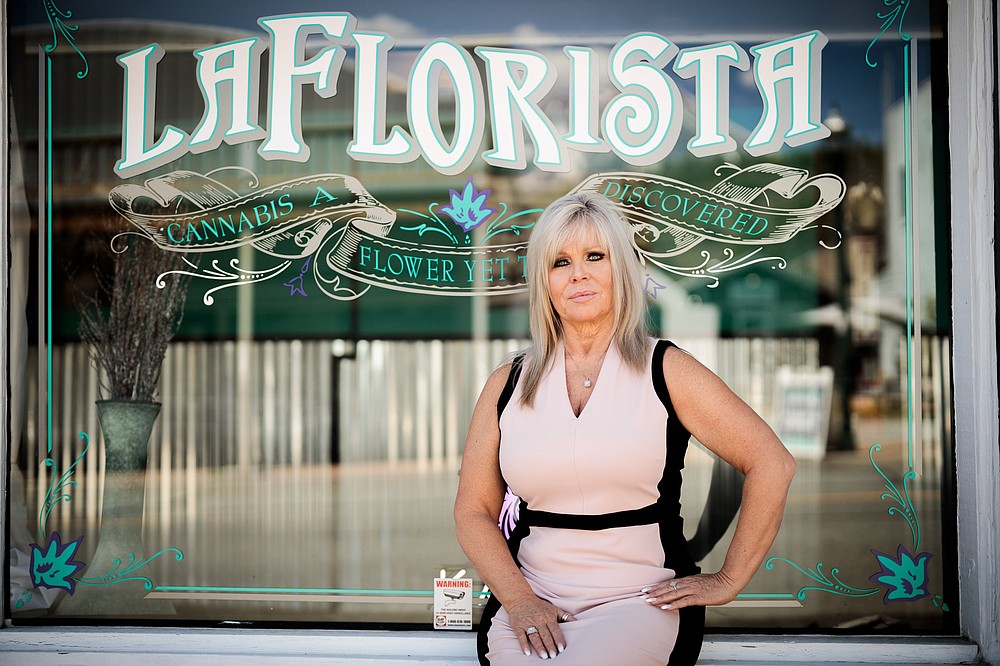 Elizabeth Tabor is the owner of the town’s first dispensary, La Florista, which began as a medical marijuana business but is now permitted to sell to all adults. (The New York Times/Max Whittaker)

Tim Rundel, who took the job of city manager last year just as the coronavirus pandemic was sweeping through California, said many members of his staff were unconvinced about allowing the cannabis industry to take root in Weed until he showed them how the lockdowns were sapping tax revenues.

"You could either embrace it or resist it, and when I see our financial statements, I look at it as a potential opportunity," Rundel said.

Jobs at the proposed cannabis facility, which is still undergoing environmental review, are expected to start at $20 an hour and will come with health insurance, according to the business plan. The local community college will offer a training program in the fall on the ins and outs of the cannabis and hemp business.

"We have to keep moving forward," said Dawnie Slabaugh, the director of public relations at the College of the Siskiyous, the community college in Weed. "Or we are going to just become another ghost town."

Licensing of the city's logo could net the city $400,000 a year, according to Rundel.

That money would depend on the success of the production facility. But the bet on cannabis is already paying dividends. In January, the city began collecting around $10,000 a month from the two cannabis dispensaries in town.

Elizabeth Tabor, the owner of the town's first dispensary, La Florista, which began as a medical marijuana business but is now permitted to sell to all adults, has taken pains to win over skeptics. She has become a fixture at town hall meetings, patiently answering questions. To churchgoing residents, she portrays cannabis as a plant put on earth for people to use, quoting from the Book of Genesis, "And God said, 'Behold, I have given you every plant yielding seed that is on the face of all the earth.'"

"I think they thought we would end up with riffraff," Tabor said at her dispensary, where the list of marijuana products for sale runs for seven pages. 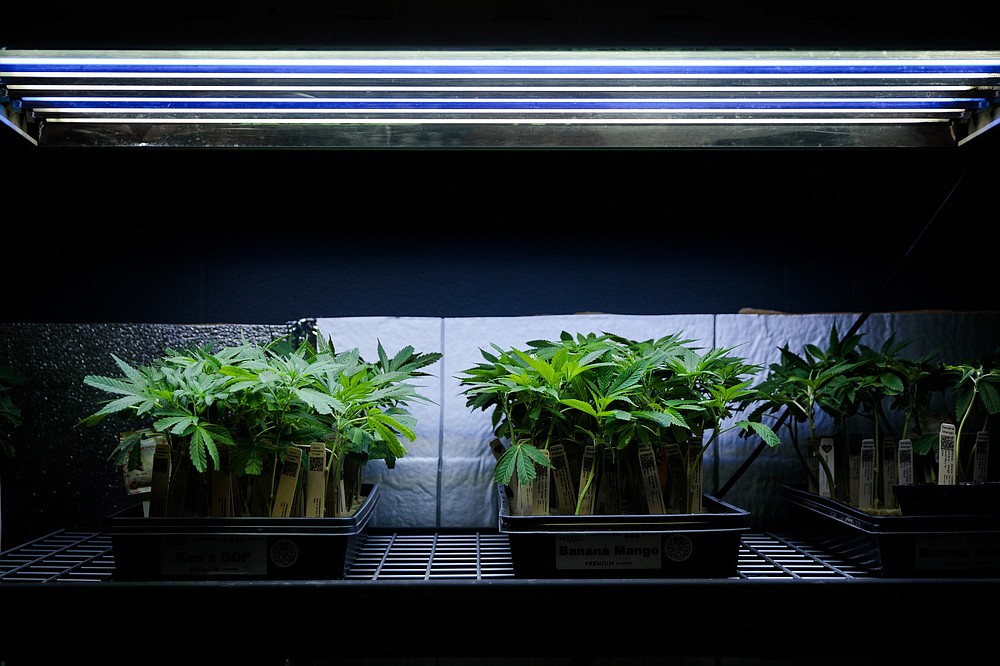 Cannabis seedlings are for sale at La Florista Cannabis dispensary in Weed, Calif. California allows residents to buy the plants and grow their own. (The New York Times/Max Whittaker)

Inside the dispensary with turquoise walls, salespeople hawk cannabis-infused chocolates, cookies and s'mores. There is also cannabis for pets. ("Helps support calmness, joint mobility, brain function.") And for $23, customers can walk out with a marijuana plant that California law allows them to plant in their backyard.

"You used to drive through downtown and there wasn't a car in sight," the mayor said. "Now there isn't a parking spot in sight."

On a sunny afternoon outside the Weed Store, a souvenir shop where visitors were lined up at the cash register with T-shirts, Cindy Stensaas, who owns the store with her husband, acknowledged that jokes about Weed can get tiresome. But sales from the shop, Stensaas noted, put her two children through college.

"We are a poor rural community," she said. "We'll take whatever we can get."