Mayor says it’s time for ‘all kids in classroom together’ by Compiled Democrat-Gazette Staff From Wire Reports | May 25, 2021 at 7:10 a.m. 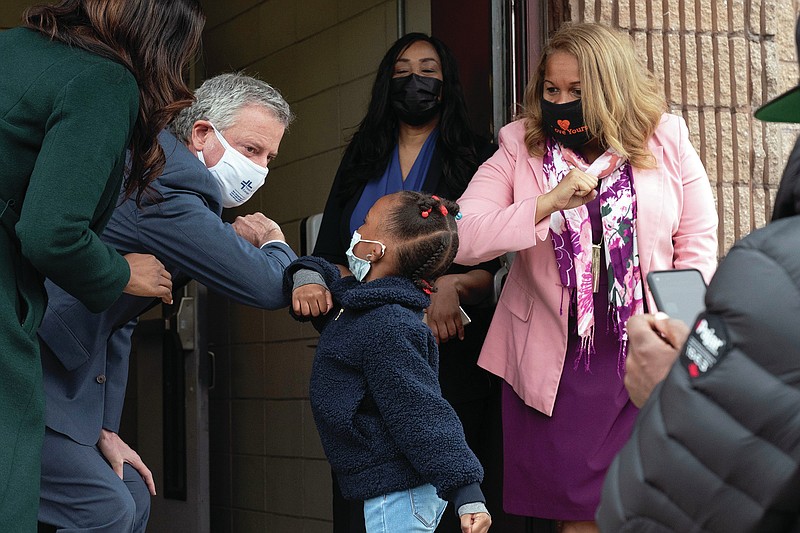 NEW YORK -- Mayor Bill de Blasio said Monday that New York City will no longer have a remote schooling option come fall, a major step toward fully reopening the nation's largest school system and a crucial marker in the city's economic recovery after more than a year of disruptions caused by the pandemic.

"It's time for everyone to come back," said de Blasio, a Democrat. "It's time for us all to be together. It's time to do things the way they were meant to be done. All the kids in the classroom together getting a great education from educators who care, staff members who care."

De Blasio said the roughly 1 million students who attend traditional public schools will be in their classrooms with some version of the coronavirus protocols that have been in place in the current academic year, including mask wearing and covid-19 testing.

[Video not showing up above? Click here to watch » https://www.youtube.com/watch?v=UgN7uHZKJ9I]

Many parents will also be able to return to work without supervising their children's online classes, which could prompt the revitalization of entire industries and neighborhoods.

New York is one of the first big cities in the country to remove the option of remote learning altogether for the next school year, making widespread predictions that online classes would be a fixture for school districts seem premature. Gov. Phil Murphy of New Jersey, a Democrat, announced last week that the state would no longer have remote classes come fall. Leaders in Massachusetts and Illinois, along with San Antonio, have said there will be extremely limited remote options.

Education officials in Florida have indicated they will significantly reduce or even eliminate online classes next school year, and the superintendent of Miami-Dade schools said he expected all students to return this fall. Houston, one of the largest districts in the country, will keep a remote option for fall, as will Philadelphia.

The head of the union that represents New York City teachers signaled it would accept the plan, saying there was "no substitute for in-person instruction," though it said some students might still need a remote option next fall.

"We still have concerns about the safety of a small number of students with extreme medical challenges," said Michael Mulgrew, president of the United Federation of Teachers. "For that small group of students, a remote option may still be necessary."

Asked about the mayor's decision Monday, New York Gov. Andrew Cuomo, a Democrat, who has clashed with de Blasio throughout the pandemic over who has the right to set covid-19 rules, also suggested he was on board.

"We're going to set a statewide policy which will govern all school districts. But if you ask me today, by the current trajectory that we are on, I think there's no reason why every school shouldn't be open in September."

While de Blasio's announcement eliminated the largest logistical obstacle to fully reopening the school system, he still has to convince hesitant families and staff that it is safe for schools to return to normal.

This school year, the majority of the city's roughly students -- about 600,000 -- stayed home for classes. A disproportionate number of the families that chose online learning were nonwhite, a reflection of the disproportionate health outcomes suffered by Black and Hispanic families in particular when the city became a global epicenter of the virus last spring.

The mayor also said that teachers and school staff members, who have been eligible for covid-19 vaccinations since January, will no longer be granted medical waivers to work from home. Nearly a third of city teachers are working from home, which has forced some schools to offer only online learning, even from school buildings. Some parents who chose remote learning said they did so to avoid the unpredictability of hybrid learning. Their issues will be mostly resolved by the elimination of remote classes.

But other families are still concerned about the virus. Though reopened classrooms have been relatively safe since last fall, with very low positive test rates and few outbreaks in schools, the pandemic has revealed a profound lack of trust between many families of color in particular and the city school system.

"The idea that we could be choosing home-schooling or charters is offensive to me," said Tazin Azad, who has kept her three children learning remotely from their home in the Midwood area of Brooklyn for the past year. Some charter schools may offer a remote option come fall.

"How could the city essentially force us back, force us to make a choice that is not acceptable to us?" she said.

New York, like many other districts, has already seen its enrollment drop over the last year, and more parents opting out of the public school system altogether could threaten funding and resources for the district.

De Blasio said the city would hold open houses for parents to tour their school buildings next month. But he said eliminating remote schooling was an essential part of the city's push to move past the pandemic.

"We gotta understand we're leaving covid behind," he said during a news conference Monday. "We can't live in the grip of covid the rest of our lives."

Schools Chancellor Meisha Porter said she would continue to hold virtual town-hall-style forums for parents to ask questions about reopening, though she said she believed most parents were eager for full-time classes.

De Blasio said the city would not offer any virtual instruction next year, except for snow days, which are rare in New York.

De Blasio said all students and adults would have to wear masks in schools this fall, in accordance with the current guidance from the Centers for Disease Control and Prevention. But he said that requirement could change if the CDC loosens its guidance.

The mayor also said he expected the CDC to drop its current rules on keeping 3 feet of distance between students in classrooms before the start of the next school year, though he added that the vast majority of schools could fit all students even with social distancing.

Meanwhile, federal health officials are ramping up their surveillance of the highly transmissible covid-19 variant first identified in India as experts warn that under-vaccinated areas in the U.S. could become hot spots for the mutation.

While U.S. cases attributed to the B.1.617 variant currently sit below 1%, the growth rate remains unclear due to the small sample size. Meanwhile, one science group said the strain could be as much as 50% more transmissible than B.1.1.7, the variant that emerged from the U.K. That mutation was first seen in the U.S. in late December, and is now dominant nationally.

A just-released U.K. study found the Pfizer-BioNTech vaccine was "highly effective" against a form of the B.1.617 variant two weeks after the second dose, affirming preliminary data from Phase 3 clinical trials. Still, the mutation has arrived in the U.S. at a time when anti-pandemic measures are loosening and around 60% of the population isn't yet fully vaccinated.

"From everything I can tell the vaccines are highly effective against this variant," said Samuel Scarpino, a co-founder of Global.health, an organization that tracks covid cases and variants internationally. "But there are some states in the U.S. with quite low vaccination coverage putting them at risk for potential outbreaks."

The B.1.617 variant that has devastated India was first detected in the U.S. between late February and late March of this year. On May 4, the CDC designated B.1.617 as a variant of interest. It is now studying whether to escalate its standing to a variant of concern, said Jade Fulce, a CDC spokesperson.

Currently, the CDC has classified eight variants of interest, three of which are forms of the B.1.617 strain, according to the CDC website. The agency says these variants are "predicted to affect" transmission, diagnostics, therapeutics, or immune escape, but still have limited prevalence or expansion in the U.S. or in other countries.

Separately, Alabama Gov. Kay Ivey on Monday signed legislation banning so-called vaccine passports as the state becomes the latest state to try to prohibit proof of a coronavirus vaccination to enter a business, school or event.

The legislation by Republican state Sen. Arthur Orr would prohibit government entities from issuing "vaccine or immunization passports" or other "standardized documentation for the purpose of certifying immunization status." The bill makes exemptions for child immunization forms and "other applicable state law."

The new act would also prevent people from being denied entry to businesses, universities and state agencies if they have not been vaccinated for covid-19. However, the legislation does not specify any penalty for violations.

"I am supportive of a voluntary vaccine and by signing this bill into law, I am only further solidifying that conviction," Ivey said in a statement released by her office.

Orr said the aim of the bill is "to prevent the creation of a discriminatory society based on vaccination status." Orr said there are exemptions in the bill as to not interfere with school immunization cards and other vaccinations forms.

Some Alabama House Democrats last week criticized the broad wording of the bill and said it was about politics rather than public health decisions.

"When does it become your right to pass your illness on to someone else?" Democratic state Rep. Mary Moore said.

Democratic state Rep. Merika Coleman said that Republicans are choosing to dictate to businesses what they can and can't do.

Additionally, U.S. health officials and the State Department on Monday warned Americans against travel to Japan because of a surge in coronavirus cases in the country, which is preparing to host the Olympics in just two months.

The twin alerts don't ban U.S. citizens from visiting the country, but they could have an impact on insurance rates for travelers and may factor into decisions by Olympic athletes and spectators on whether to compete in or attend the games, which are due to start in July. There was no immediate indication as to what effect the warnings might have on would-be Olympic-goers.

The State Department's warning, which followed the CDC alert, was more blunt. "Do not travel to Japan due to covid-19," it said in the announcement, which raised the department's travel alert from Level 3 -- Reconsider travel -- to Level 4 -- Do not travel. The previous alert was issued on April 21.

The United States Olympic & Paralympic Committee said it still anticipates that American athletes will be able to safely compete at the Tokyo Games.

Information for this article was contributed by Eliza Shapiro of The New York Times; by Karen Matthews, Michael Hill, Kim Chandler and Matthew Lee of The Associated Press; and by Fiona Rutherford of Bloomberg News (WPNS).