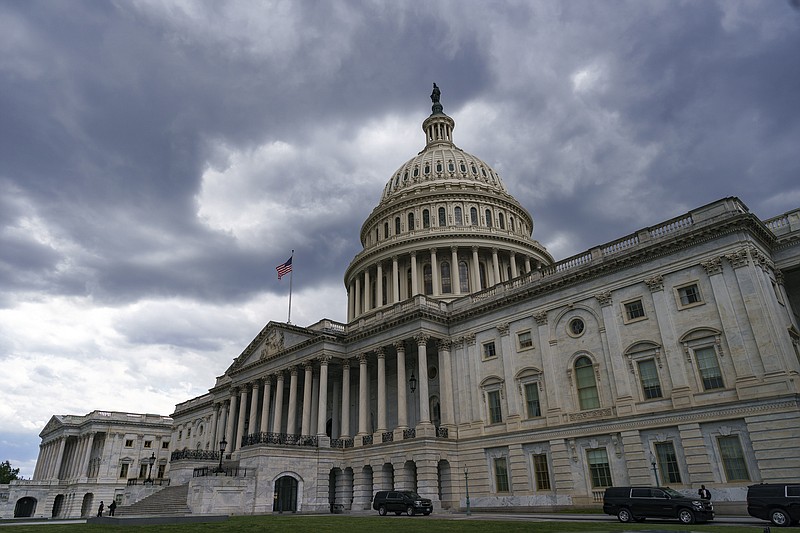 The Capitol is seen under dark skies in Washington, Tuesday, May 11, 2021. House Minority Leader Kevin McCarthy, R-Calif., has set a Wednesday vote for removing Rep. Liz Cheney, R-Wyo., from her No. 3 Republican leadership post after Cheney repeatedly challenged former President Donald Trump over his claims of widespread voting fraud and his role in encouraging supporters' Jan. 6 attack on the Capitol. (AP Photo/J. Scott Applewhite)

WASHINGTON -- National Guard personnel will fully depart the U.S. Capitol grounds this week, military officials and congressional aides said Monday, bringing an end to the security mission that began when armed troops were dispatched to help quell the attack by supporters of former President Donald Trump.

The National Guard was deployed Jan. 6 to help push back a crowd of about 10,000 rioters who had infiltrated the building and clear out the approximately 800 who had broken inside.

"These airmen and soldiers protected not only the grounds, but the lawmakers working on those grounds, ensuring the people's business could continue unabated," Defense Secretary Lloyd Austin said in a statement. "They lived out in very tangible ways the oath they took to support and defend the Constitution."

Though their mission formally ended Sunday, about 1,700 troops from nine states and the District of Columbia, remain in the District pending departures scheduled through Wednesday, according to Air Force Capt. Chelsi Johnson, a Guard spokesperson.

[Video not showing up above? Click here to watch » https://www.youtube.com/watch?v=ivIX17Pbqjs]

Guard members have been a constant fixture at the Capitol since the insurrection, numbering almost 26,000 ahead of President Joe Biden's inauguration. By the start of spring, that number fell to about 5,000 and has continued to dwindle as the threat of further violence has abated.

Armed troops have manned entry points to the Capitol campus and run patrols of the fenced-in grounds to buttress the Capitol Police force. Guard members also provided logistical support and helped facilitate communication for the throngs of federal authorities at the Capitol.

In recent weeks, the Guard's prolonged presence has also become a flash point for partisan sniping, as lawmakers argued about the costs of maintaining such a force -- and split over whether the protracted armed lockdown of the Capitol campus remains necessary.

Speaking on Sunday, retired Army Lt. Gen Russel Honore signaled on CBS News's "Face the Nation" the Guard's impending departure, but warned it did not mean things at the Capitol would return to normal.

Honore's recommendations suggested several investments in the Capitol Police, including adding 854 positions to help the force better process intelligence and build specialized expertise in riot control. Many of those recommendations have been included in an emergency security spending bill that last week passed the House on the narrowest of margins, after all Republicans and a handful of Democrats withheld support.

The $1.9 billion legislation, which has yet to be considered in the Senate, commits nearly $800 million to hardening the Capitol with reinforced doors and windows, additional security checkpoints, and equipping Capitol Police with the weapons and training they need to guard the complex and its members from threats, both in Washington and in their home districts.

It also dedicates over $500 million dollars toward covering accrued expenses of the National Guard's deployment.

On Monday, after meeting with members of the National Guard, Pelosi issued a statement thanking them for their service and urging the Senate to take up both the spending bill and legislation to establish an independent commission to investigate the events of Jan. 6. The commission was approved in the House last week with the support of all Democrats and 35 Republicans.

"The Senate must act," she said. "There is no time to waste or room for partisanship in keeping our Capitol and country safe."

In a statement in which he too thanked the troops, Senate Minority Leader Mitch McConnell, R-Ky., promised only to "continue to discuss and debate whether it is appropriate for uniformed military personnel to play an ongoing role in policing the United States Capitol going forward."