Vaccine-maker to seek OK next month for use in youths by Compiled Democrat-Gazette Staff From Wire Reports | May 26, 2021 at 7:12 a.m. 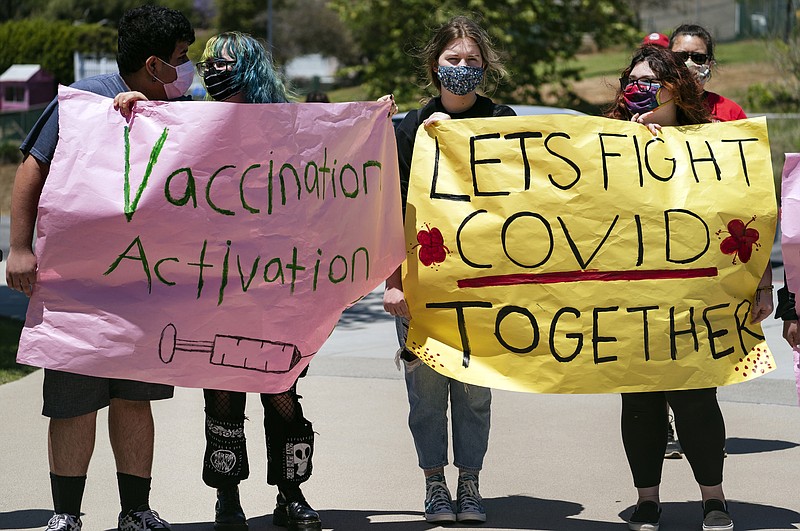 San Pedro High School students hold vaccination signs at a school-based COVID-19 vaccination event for students 12 and older in San Pedro, Calif., Monday, May 24, 2021. Schools are turning to mascots, prizes and contests to entice youth ages 12 and up to get vaccinated against the coronavirus before summer break. (AP Photo/Damian Dovarganes)

Biotechnology company Moderna announced Tuesday that its two-shot coronavirus vaccine produced the same protective immune response in teens as it does in adults, and the firm said it plans to submit the data to U.S. regulators for review next month.

In a clinical trial of the vaccine in adolescents, there were no cases of symptomatic covid-19 among fully vaccinated teens, the company reported in a news release.

[Video not showing up above? Click here to watch » https://www.youtube.com/watch?v=1pyBSiiirUM]

Moderna plans to apply to the Food and Drug Administration in June for authorization to use the vaccine in adolescents. If approved, its covid-19 vaccine would become the second available to U.S. adolescents, after federal regulators authorized the Pfizer-BioNTech vaccine for 12- to 15-year-olds this month.

The Pfizer shot was initially authorized for use in people 16 and older, while Moderna's has been available for those 18 and up.

The Moderna results match what Pfizer reported in its trial of adolescents, adding to a growing body of evidence that the vaccines are safe and effective in children.

"We were pretty excited to see the data, and we're excited to see that the numbers look very good," said Dr. Yvonne Maldonado, a pediatric infectious disease specialist at Stanford Medicine and chair of the American Academy of Pediatrics Committee on Infectious Diseases.

She added, "People are going to be more comfortable being able to go back to school. They're going to be able to do more activities socially. I do think it's going to make a big difference in opening our society back up."

On Monday, New York Mayor Bill de Blasio said that all public school students in the city, the largest school system in the United States, would return to in-person learning in the fall. Several other states, including Connecticut, Illinois, Massachusetts and New Jersey, have also indicated that they will restrict online learning.

The widespread availability of safe, effective vaccines for teenagers could allow middle and high schools to operate more safely and restore at least some sense of normalcy.

"Having adolescents vaccinated against the virus is really going to limit spread in school to a great degree," said Dr. Sean O'Leary, a pediatric infectious disease expert at the University of Colorado Anschutz Medical Campus. "It potentially could even change mask requirements for school, depending on the level of vaccination uptake. I'm looking forward to a much different school year next year, primarily because of vaccination."

But Moderna's announcement comes at a time when there is already a glut of vaccines in the U.S., and amid signs that demand for vaccination may be flagging. And the authorization of vaccines for American adolescents has already raised questions about the ethics of vaccinating children, who are at relatively low risk for serious disease, while many countries do not have enough doses for their health care workers.

"It's a tough conversation, because we are glad to see vaccine distribution safely expand to children," said Saskia Popescu, an infectious disease researcher at George Mason University. "But frankly, it's hard not to see this as privileged when a majority of the world's essential workers are struggling to get access to vaccines."

The Moderna results, which the company announced in a statement, are based on a clinical trial that enrolled 3,732 people ages 12 to 17, two-thirds of whom received two vaccine doses. There were no cases of symptomatic covid-19 in fully vaccinated adolescents, the company reported. That translates to an efficacy of 100%, the same figure that Pfizer and BioNTech reported in a trial of their vaccine in 12- to 15-year-olds.

"It's really great news," said Akiko Iwasaki, an immunologist at Yale University. "These vaccines are working really well in all the age groups and potentially even better in the younger people."

Moderna also reported that a single dose of its vaccine had 93% efficacy against symptomatic disease.

"This really gives parents, I think, a little bit more confidence," said Rupali Limaye, an expert on vaccine use and hesitancy at Johns Hopkins University. "If they've had personal experience, for example, with one of the mRNA products and not the other, they might feel more comfortable then saying, 'You know, I had a great experience with Moderna, so I really want my child to get Moderna.'"

But because the Pfizer and Moderna vaccines both require two shots, spaced several weeks apart, ensuring that all teens have access to the vaccine may remain a challenge. "I think we'll still unfortunately not be able to reach more underserved populations that are facing vaccine disparities, because it's still the two-dose regimen," Limaye said.

Authorizing a one-dose vaccine, like the Johnson & Johnson shot, for use in adolescents may help close these gaps, she said.

Johnson & Johnson spokesman Jake Sargent said the company is in discussions with regulators to expand testing into pediatric populations. The biotech company Novavax, which is expected to report data from its adult trial soon, has recently expanded testing into 12-to-17-year-olds.

A growing number of public schools are using mascots, food trucks and prize giveaways to create a pep-rally atmosphere aimed at encouraging students to get vaccinated against the coronavirus before summer vacation.

Districts from California to Michigan are offering free prom tickets and deploying mobile vaccination teams to schools to inoculate students 12 and up so everyone can return to classrooms in the fall. They are also enlisting students who have gotten shots to press their friends to do the same.

Officials are concerned that once school lets out, it will be even tougher to get enough teens vaccinated in time to guarantee widespread immunity on campuses.

So far, about 14% of the nation's 15 million children ages 12 to 15 have received their first shots, according to the Centers for Disease Control and Prevention. Among 7.5 million teens ages 16 and 17, that number goes up to 34%, and about 22% have had both shots, according to the latest figures released Monday. The doses are scheduled about three weeks apart.

The U.S. already has enough doses to vaccinate adolescents many times over. There are approximately 25 million American children between the ages of 12 and 17, according to estimates from the U.S. Census Bureau. That is roughly the same number of shots that Pfizer and Moderna are distributing, in total, per week in the U.S.

The World Health Organization has called on countries with ample vaccine supply to share their shots with the world. President Joe Biden has pledged to send 80 million vaccine doses -- including shots from Pfizer, Moderna, Johnson & Johnson and AstraZeneca -- abroad, although many activists and global health experts have called on him to do more.

"While I continue to urge all Georgians to get vaccinated so we continue our momentum in putting the covid-19 pandemic in the rearview, vaccination is a personal decision between each citizen and a medical professional -- not state government," The Republican governor said in a statement.

Georgia has the eighth-lowest rate among states for covid-19 vaccinations among people 12 and older, according to data from CDC.

Tuesday's order also says no vaccine passport can be required for entry into Georgia, a move that could block any airline or bus line from using them. Kemp's order otherwise doesn't apply to private businesses that could request proof of vaccine for entry or require employees to get shots.

Spokesperson Cody Hall said the order does not ban prisons, mental hospitals or juvenile justice facilities from asking whether inmates or patients had been vaccinated, but said any state service can't be conditional upon vaccination status.

Hall said the order does not ban the state Department of Public Health from including an entry for covid-19 vaccines on the standard immunization record that pediatricians provide to parents enrolling children in child care or school. The record does not now include such an entry.

Employers can still inquire if a worker is vaccinated. Kemp said public employers can make different rules for vaccinated and unvaccinated employees, but must take the worker's word for whether he has received shots protecting against covid-19, and can't require any proof.

Additionally, Louisiana Gov. John Bel Edwards announced Tuesday that he's scrapping nearly every remaining coronavirus restriction in the state and lifting the statewide requirement that students must wear masks in the classroom and at school events.

The Democratic governor will keep the statewide public health emergency declaration in place, but Louisiana will have almost none of the rules governing businesses and behavior that were enacted over the last 15 months of the pandemic.

"There's no doubt we are in a better place today than we've been at any point thus far in the pandemic," Edwards said. "And that is because of medical science."

Edwards cited the wide availability of the coronavirus vaccine in Louisiana, saying anyone who wants the protection offered by immunization against the covid-19 illness caused by the virus can receive one. But many people aren't bothering to get the shots, with only 31% of the state's 4.6 million residents fully vaccinated against covid-19.

The final vestiges of the restrictions that Edwards had left in place over the past month -- including limits on bars, live music venues, athletic events and large gatherings -- all will be removed under the new executive order to take effect today.

Masks still will be required on public transit, in health care facilities and in prisons and jails, as suggested by federal officials. But the other remaining face covering requirement for early learning centers, K-12 schools and universities will end. School district and university leaders can decide on their own if they want to mandate masks for summer school, summer camps and fall classes.

Information for this article was contributed by Emily Anthes of The New York Times; by Carolyn Y. Johnson of The Washington Post; and by Julie Watson, Ed White, Jacquelyn Martin, Jeff Amy and Melinda Deslatte of The Associated Press.