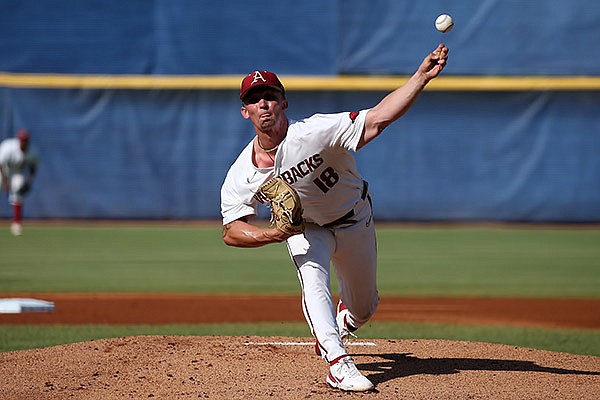 Arkansas pitcher Lael Lockhart throws during an SEC Tournament game against Georgia on Wednesday, May 26, 2021, in Hoover, Ala. (SEC pool photo)

Arkansas left hander Lael Lockhart came within one out of throwing a perfect game during the Razorbacks’ 11-2 win over Georgia on Wednesday at the SEC Tournament.

Leading 10-0 with a run rule in effect, Lockhart gave up a two-out infield single to the Bulldogs’ Josh McAllister in the seventh inning to break up what would have been the first perfect game in Razorback history. Georgia catcher Corey Collins followed with a two-run home run to extend the game.

Lockhart (3-2) struck out 11 in a season-best seven-inning start to lead Arkansas to within one win of playing in the tournament semifinals.

The top-ranked Razorbacks (43-10) will play either Vanderbilt or Ole Miss in the late game Thursday beginning at approximately 8 p.m. at Hoover (Ala.) Metropolitan Stadium.

Ole Miss and Vanderbilt are scheduled to play in the nightcap tonight. The loser of that game will play Georgia (31-24) in an elimination game Thursday afternoon.

The big inning came with a scare, though, when Arkansas first baseman Brady Slavens turned his ankle at first base. Slavens’ two-run single gave him a team-high 61 RBI and the Razorbacks a 5-0 lead, and Arkansas scored its sixth run when Polk committed a throwing error trying to pick off Slavens’ pinch runner, Jacob Nesbit, at first base.

Slavens spent most of the game in the dugout with crutches and his right foot in a boot. The severity of his injury is not known.

Arkansas added a run in the fourth inning on Christian Franklin’s sacrifice fly to score Zack Gregory, and three more runs in the fifth inning to go ahead 10-0. Cullen Smith hit a solo home run to lead off the fifth and Cayden Wallace and Franklin drew bases-loaded walks in the inning.

Jalen Battles drew another bases-loaded walk to put Arkansas ahead 11-2 with one out in the eighth inning, but the Razorbacks missed on a second chance to end the game early when Gregory lined out and Matt Goodheart fouled out with the bases loaded. Goodheart went 0 for 6 hitting leadoff.

The Razorbacks drew 14 walks — including four with the bases loaded — in eight innings. Five Bulldogs combined to throw 206 pitches, but only 105 for strikes.

Arkansas defeated Georgia for the third time in four games. The Razorbacks won a series at Baum-Walker Stadium in Fayetteville on May 7-9.

Heston Tole stays in the game and gets the first batter to strikeout swinging. Stinson singles through the left side.

Rain is coming down at a steady clip now.

A ground ball to Moore and he throws to second to get the lead runner, but that's it.

Tole gets a strikeout to end the game.

Will Pearson in to pitch for Georgia.

Franklin strikes out to start the inning.

Moore walks on a full count to bring Smith up with a runner on.

Smith walks, the 13th walk of the day for Georgia pitching, and Opitz bats now.

Opitz hits a loop into left field, the diving left fielder can't catch it. The runners move up 90 feet and the bases are loaded for Battles.

Battles walks and it's 11-2 Arkansas.

Gregory almost ended this game. He hit a line drive, but the second baseman lunged and caught it for the second out.

Goodheart flies out to right field to end the inning.

Lockhart's day is done. Heston Tole in to pitch.

Tole retires Georgia 1-2-3 to end the 8th. He gets two strikeouts and a flyout.

Arkansas goes 1-2-3 in the 7th to extend this game. A groundout and two strikeouts end the inning.

Wagner pinch hits and is struck out swinging on three pitches.

Another three pitch strikeout and Lockhart is one out away.

McAllister singled right between Nesbit and Battles to end Lockhart's bid for a perfect game.

Collins then takes a pitch down and in over the fence to keep this game alive.

Lockhart battles back to strikeout Jernigan to end the inning.

A Smith flyout, Opitz groundout and a Gregory strikeout end the inning. Battles did work a walk in there, but that's it for Arkansas in the sixth.

Some storms are approaching Hoover as Lockhart tries to shut down the Bulldogs in the 7th inning and end this game.

Rogers grounds out, the pinch hitter Mason Meadows strikes out swinging and after falling behind 2-0 Lockhart gets Harbert to line out to second to end the inning.

Cullen Smith leads off the inning with a solo shot to right field. That was a no doubter from Smith.

Opitz swings at the first pitch and singles to left field.

A ball gets by Gonzalez and Opitz moves up to second.

Battles and Gregory both walk to load the bases and Georgia will go to the pen again.

Goodheart strikes out swinging for the first out.

Wallace walks and Opitz scores to bring the score to 9-0.

Nesbit swings through a fastball and strikes out.

Franklin walks and that brings Battles home. 10-0 Hogs. The run rule is 10 runs after seven inning.

Moore grounds out to first to end the inning.

Lockhart retires the first two batter of the inning with a groundout to first and then a flyout to left.

Kameron Guidry comes in to pinch hit with two outs. He comes in for Blaylock.

Guidry strikes out looking and Lockhart is feeling it.

Georgia goes to the bullpen again. This time bringing in

Gregory leads off the inning with a single to center.

A ball in the dirt is blocked by Gonzalez, but it gets away from him slightly and Gregory gets to second before the throw.

Goodheart takes a breaking ball right down the pipe to strikeout looking.

Slavens walks on a 3-2 pitch to bring up Nesbit.

Nesbit grounds to the third baseman, but the first baseman can't handle the throw and everybody is safe. Bases loaded for Franklin.

Franklin hits a high fly ball to center. Gregory scores, Slavens moves up to third and Nesbit stays at first.

Moore strikes out swinging to end the inning.

Smith pops up foul, Opitz grounds out to first and Battles lines out to center to end the inning.

Lockhart sat on the bench for a while during that Arkansas six run inning, but it hasn't seemed to bother him.

A flyout to left, a flyout to right and a strikeout for Lockhart in the third. He's seen nine batters and struck out nine batters.

Franklin leads off the inning with a walk.

A ball gets away from the catcher and Franklin takes second base.

Moore takes a 3-2 pitch low to give the Hogs runners on first and second with nobody out.

That will prompt a mound visit from Georgia's pitching coach.

Cullen Smith with a double to right-center field. The right fielder cut it off, but Franklin scores and Moore moves to third. The Hogs strike first and there are still no outs.

Goldstein is done and the Bulldogs go to Michael Polk.

Opitz strikes out swinging on a fastball above the letters for the first out.

Battles with major league pop fly to the Bermuda triangle between the second baseman, center fielder and right fielder and the ball falls. Moore scores, Smith goes to third and Battles is on first.

Polk walks Gregory on four pitches to load the bases.

Goodheart strikes out swinging for the second out.

Polk walks Wallace on four pitches and Smith will trot home to give Arkansas a 3-0 lead.

Slavens hits a shot, but the shift is on. The second baseman dives and fields the ball, but the throw is wild, Slavens is safe but he rolls his ankle hitting the bag. It does not look great for Slavens. After a long pause he is helped off the field. He eventually puts weight on his foot, but that didn't look good.

Two runs scored on the hit and the Hogs lead 5-0.

Nesbit comes in to run for Slavens.

Polk throws over to first base, but it gets by the first baseman. Wallace scores and Nesbit advances to second. 6-0 Hogs.

Franklin walks and there are now two aboard.

Moore flies out to right to end the inning, but the Hogs get six runs in the second.

Lockhart strikes out the first batter looking on a 3-2 fastball.

Riley King hits a ball on the infield, that it looks like Slavens' lets hit the ground, but they rule it a catch in the field. Then after trying to go to replay the TV broadcast said it's not a reviewable play, so the call stands.

Then Lockhart strikes out the next batter on three pitches.

Arkansas follows the same pattern as Georgia in the bottom of the inning. The first two batters strikeout to start the inning, and then Slavens groundsout to end the inning.

Lael Lockhart sets down the Bulldogs in order in the first.

He struck out the first two batters and then got the third to pop up to short right field.

Arkansas is the No. 1 seed at the SEC Tournament following its regular-season championship. The Razorbacks have never won the tournament title….Georgia entered the tournament on the heels of four consecutive SEC series losses against Auburn, Arkansas, Florida and Ole Miss. The Bulldogs are the No. 8 seed....Georgia defeated LSU 4-1 on Tuesday in an elimination game at the tournament….Arkansas starting pitcher Lael Lockhart did not pitch against the Bulldogs….Since playing at Arkansas earlier this month, the Bulldogs lost their ace starting pitcher, left hander Ryan Webb, to a season-ending injury….Arkansas lost 3-1 to Georgia in its last SEC Tournament game two years ago…