COOKING FOR TWO: Thinking outside the banana — cook the peel 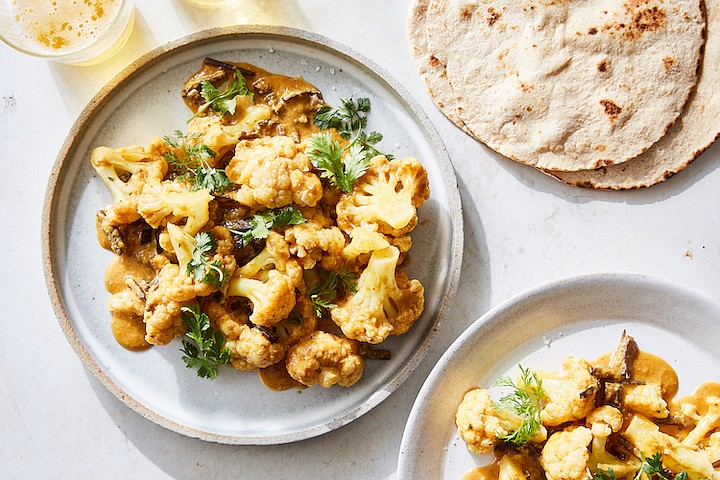 In November, British cookbook author and food personality Nigella Lawson shocked her nation when she demonstrated a recipe from her latest cookbook, "Cook, Eat, Repeat," on her BBC television show of the same name. It wasn't royal family-level scandalous. Still, based on public reaction, you'd think she'd caused a major controversy.

And all because she'd prepared a fragrant dish of cauliflower — and banana peels.

"I certainly didn't expect newspaper headlines about it," she said in an email. "It's hard to overcome the cultural assumptions about what is and is not edible, and to start eating what we have customarily regarded as waste."

Bring a large pot of water to a full boil.

Put the banana peels in a medium-large heatproof bowl. Pour in enough of the boiling water to cover, reserving the rest for cooking the cauliflower.

Add the cauliflower florets and leaves to the pot and boil for 5 to 7 minutes, or until fork tender.

While the cauliflower cooks, gently stir ½ teaspoon each turmeric and fine salt into the bowl with the soaking banana peels. Let sit until they've softened up and are cool enough to handle, around 30 minutes.

Meanwhile, once the cauliflower is tender, drain it into a colander in the sink; set aside while the banana peels cool and you make the curry paste.

Prepare the curry paste: Place the shallots, ginger and chile into a 4-cup liquid measuring cup or wide jar that accommodates an immersion blender.

Using the flat side of a heavy knife, bruise the garlic to help remove the skins, then add the peeled cloves to the measuring cup followed by the cilantro stems, cinnamon and remaining ¾ teaspoon turmeric. Use the immersion blender to turn everything into a paste. (Be patient: At first you'll never think it's going to happen, but after a while, everything will obligingly turn into a vibrantly colored mush.)

Drain the banana skins, squeezing out any excess liquid, and either chop them into slightly smaller-than-bite-size pieces, or take a fork and, with the interior of the banana skins facing you, press the tines into the top and push all the way down so that you have long, thin strips.

Heat the vegetable oil in a wok or medium skillet over medium-low. When the oil is hot, add the curry paste and fry for 7 minutes, stirring most — if not all — of the time. As it cooks, the paste will seem to condense and tighten; it will also lose its cheery brightness.

Stir in the tomato paste and cook, stirring, for 3 minutes. Add the coconut milk, lemon juice, sugar and flaky salt. Whisk to combine, scraping the browned curry from the bottom of the pan. Cook, uncovered, for 5 minutes, letting it bubble, reduce and thicken a little.

Add the banana skins to the pan, lower the heat and bring to a simmer for another 10 minutes, or until the sauce has thickened and the banana skins are soft. Tip in the cauliflower florets and leaves and cook until they're hot all the way through.

Taste and adjust for salt as needed. Scatter the reserved chopped cilantro leaves over the curry and serve with rice or flatbread, if desired.