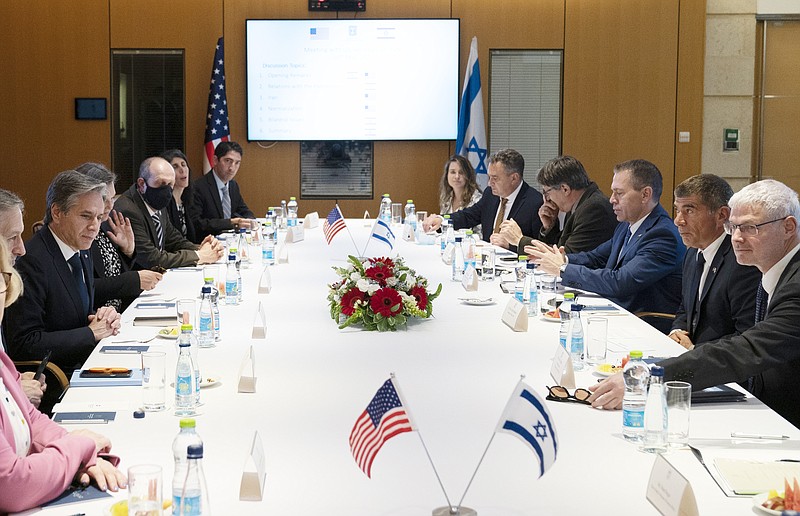 Secretary of State Antony Blinken is seated with Israeli Foreign Minister Gabi Ashkenazi, second from right, before their meeting at the Ministry of Foreign Affairs, Tuesday, May 25, 2021, in Jerusalem, Israel. (AP Photo/Alex Brandon, Pool)

JERUSALEM -- Secretary of State Antony Blinken on Tuesday announced plans to reopen a key diplomatic outreach office to the Palestinians and pledged nearly $40 million in new aid -- reversing key policies of the Trump administration as he moved to bolster the embattled Palestinian government in the West Bank.

On his first official visit to the region, Blinken met with Israeli and Palestinian leaders with the immediate aim of shoring up last week's cease-fire that ended 11 days of fighting between Israel and Hamas militants in the Gaza Strip. He vowed to "rally international support" for the effort while also promising to ensure that none of the aid would reach Hamas.

[Video not showing up above? Click here to watch » https://www.youtube.com/watch?v=x62nCdVwexQ]

Blinken repeatedly alluded to the underlying issues of the decades-old conflict and expressed empathy for both sides, but he showed little interest in launching another U.S. push for lasting peace. Instead, he expressed hope for creating a "better environment" that might one day yield peace talks.

Blinken made clear that President Joe Biden will pursue a more even-handed approach to the region than did former President Donald Trump, who sided with Israel in many areas of disagreement with the Palestinians.

"As I told the president, I'm here to underscore the commitment of the United States to rebuilding the relationship with the Palestinian Authority and the Palestinian people, a relationship built on mutual respect and also a shared conviction that Palestinians and Israelis alike deserve equal measures of security, freedom opportunity and dignity," he said after a meeting with Palestinian President Mahmoud Abbas in the West Bank.

Blinken said the U.S. would reopen its Jerusalem consulate -- an office that for years served as the de facto embassy to the Palestinians.

Trump had downgraded its operations and placed them under his ambassador to Israel when he moved the U.S. Embassy from Tel Aviv to the holy city in 2018. The embassy move infuriated the Palestinians, who claim Israeli-annexed east Jerusalem as their capital, and led them to sever most ties with the Trump administration.

Blinken did not provide a firm date for the reopening but said Michael Ratney, a senior U.S. diplomat who has previously served as consul general in Jerusalem, would soon be returning to the region.

Blinken promised that any assistance will be kept out of the hands of Hamas, which opposes Israel's right to exist and which Israel and the U.S. consider a terrorist group.

The U.S. is trying to bolster Abbas, who has been sidelined by recent events, in his rivalry with Hamas and on the international stage.

Abbas heads the internationally backed Palestinian Authority, whose forces were driven from Gaza when Hamas seized power there in 2007. He now administers only parts of the occupied West Bank. Though deeply unpopular at home, he is seen internationally as the representative of the Palestinian people and a key partner in the long-defunct peace process.

The truce that ended the latest Gaza conflict Friday has so far held, but it did not address any of the deeper issues plaguing the Israeli-Palestinian conflict, something Blinken acknowledged after meeting Tuesday with Israeli Prime Minister Benjamin Netanyahu.

"We know that to prevent a return to violence, we have to use the space created to address a larger set of underlying issues and challenges. And that begins with tackling the grave humanitarian situation in Gaza and starting to rebuild," he said.

Those challenges include a hawkish Israeli leadership that seems unwilling to make major concessions, Palestinian divisions, years of mistrust and deeply rooted tensions surrounding Jerusalem and its holy sites.

The conflict was triggered by weeks of clashes in Jerusalem between Israeli police and Palestinian protesters in and around the Al-Aqsa Mosque, built on a hilltop compound revered by Jews and Muslims that has seen several outbreaks of Israeli-Palestinian violence over the years. The protests were directed at Israel's policing of the area during the Muslim holy month of Ramadan and the threatened eviction of dozens of Palestinian families by Jewish settlers.

The truce remains tenuous since tensions are still high in Jerusalem and the fate of the Palestinian families is not yet resolved.

On Tuesday, the leader of the Lebanese militant group Hezbollah, Hassan Nasrallah, said Israeli actions at Al-Aqsa could provoke fighting across the Middle East. "Jerusalem means a regional war," said Nasrallah, whose group fought Israel in a monthlong war in 2006.

Meanwhile, Netanyahu is fighting for his political career after a fourth inconclusive election in two years. He faces mounting criticism from Israelis who say he ended the offensive prematurely, without halting rocket attacks or dealing a heavier blow to Hamas.

In his remarks after his meeting with Blinken, Netanyahu hardly mentioned the Palestinians, warning of a "very powerful" response if Hamas breaks the cease-fire.

Netanyahu spoke of "building economic growth" in the occupied West Bank but said there will be no peace until the Palestinians recognize Israel as a "Jewish state." The Palestinians have long objected to that demand, saying it undermines the rights of Israel's own Palestinian minority.

Blinken repeatedly affirmed what he said was Israel's right to defend itself and said the U.S. would assist Israel in replenishing its Iron Dome rocket-interception system.

But he also called on leaders of all sides to chart a "better course" in hopes of laying the groundwork for peace talks aimed at establishing an independent Palestinian state alongside Israel. The Biden administration, like most of the international community, believes the "two-state solution" is the only way to resolve the conflict.

He said that could start with a successful reconstruction effort in Gaza, which "has the potential to undermine" Hamas. He also urged all sides to refrain from moves that could escalate tensions or reignite violence. He cited the planned evictions in east Jerusalem, Israeli settlement construction and Palestinian incitement.

In a series of discussions with Blinken throughout the afternoon, Netanyahu and other Israeli officials also homed in on what they described as another urgent threat to their stability: Iran.

With American and Iranian diplomats separately meeting with world powers in Vienna, officials have in recent days noted progress in negotiations to get both sides back into compliance with a 2015 nuclear deal.

On Tuesday, Netanyahu said he hoped the United States would not simply return to the agreement that the Trump administration jettisoned in 2018, in hopes of imposing stricter limits on Iran's nuclear, missile and military programs.

Netanyahu said the original deal "paves the way for Iran to have an arsenal of nuclear weapons."

"We also remember that whatever happens, Israel will always reserve the right to defend itself against a regime committed to our destruction," he said.

Blinken noted that the United States would continue to consult with Israel about negotiations "around the potential return to the Iran nuclear agreement."

Blinken heads to neighboring Egypt and Jordan today, which have acted as mediators in the conflict. Egypt succeeded in brokering the Gaza truce after the Biden administration pressed Israel to wind down its offensive.

Information f or this article was contributed by Josef Federman and Sarah El Deeb of The Associated Press; and by Lara Jakes of The New York Times. 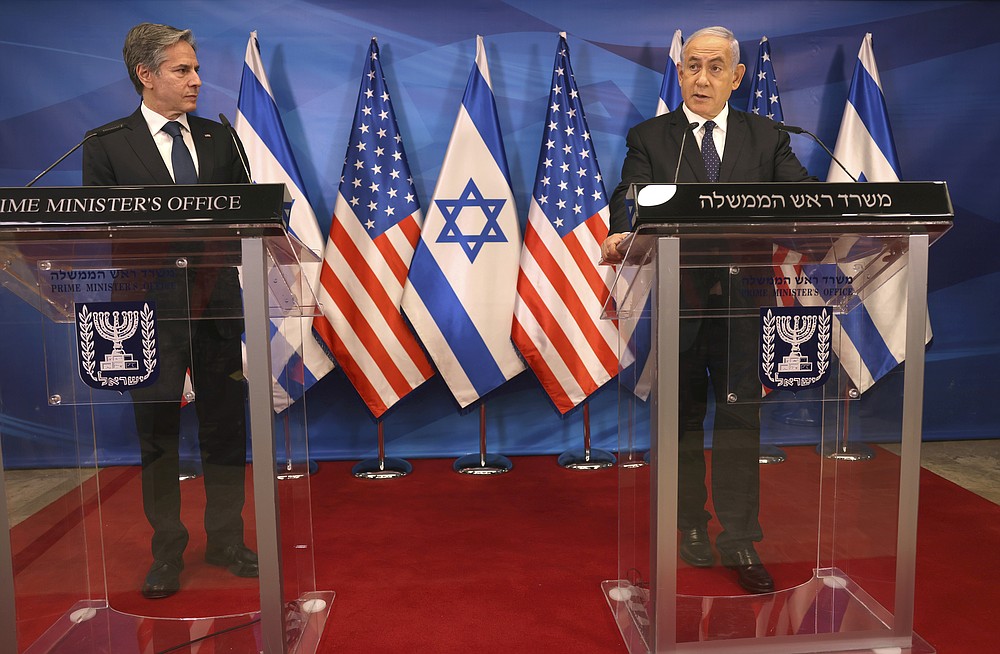 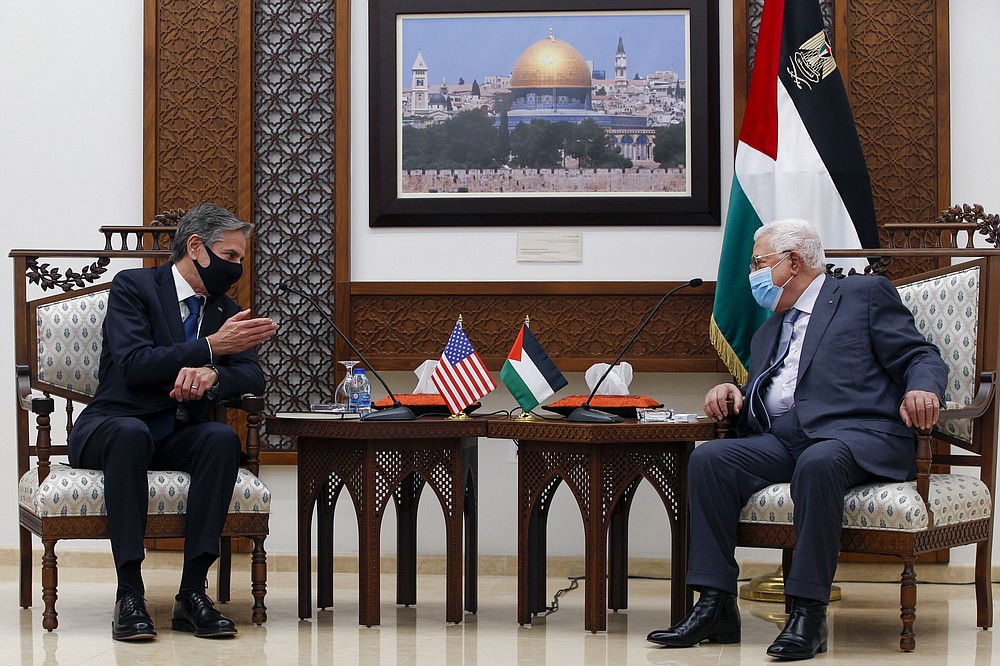 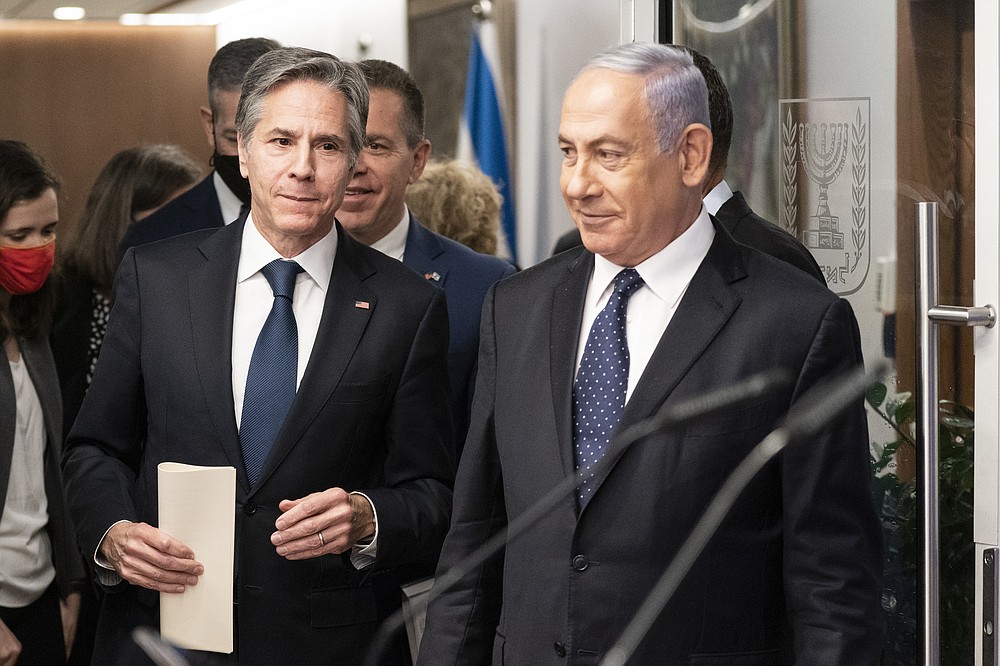 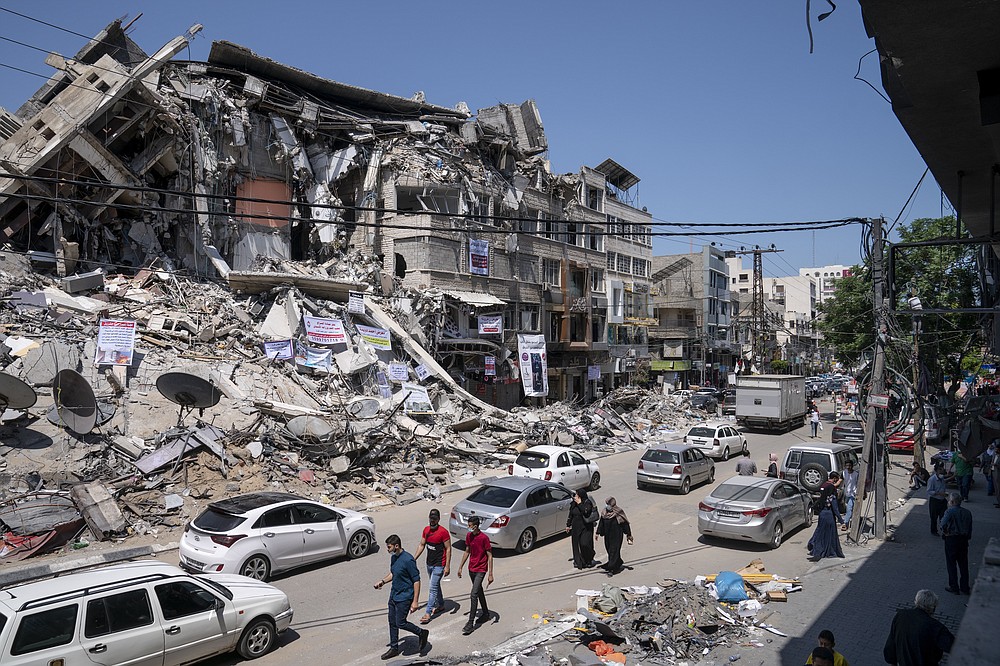 Motorists and pedestrians move past a building destroyed by an air-strike prior to a cease-fire that halted the 11-day war between Gaza's Hamas rulers and Israel, Tuesday, May 25, 2021, in Gaza City, the Gaza Strip. (AP Photo/John Minchillo) 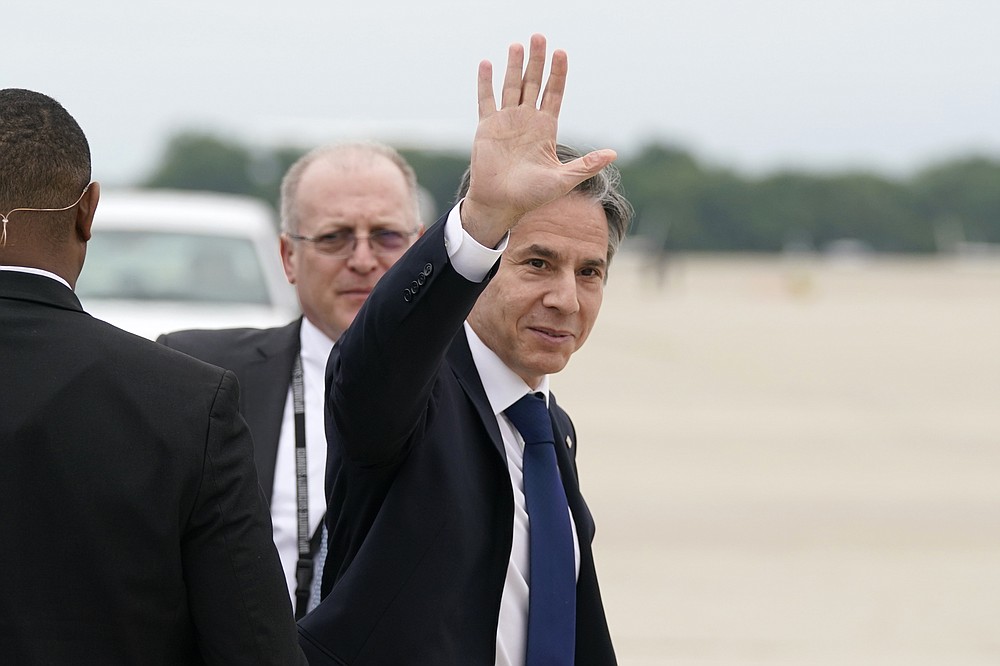 Secretary of State Antony Blinken waves as he departs, Monday, May 24, 2021, at Andrews Air Force Base, Md. Blinken is en route to the Middle East. (AP Photo/Alex Brandon, Pool) 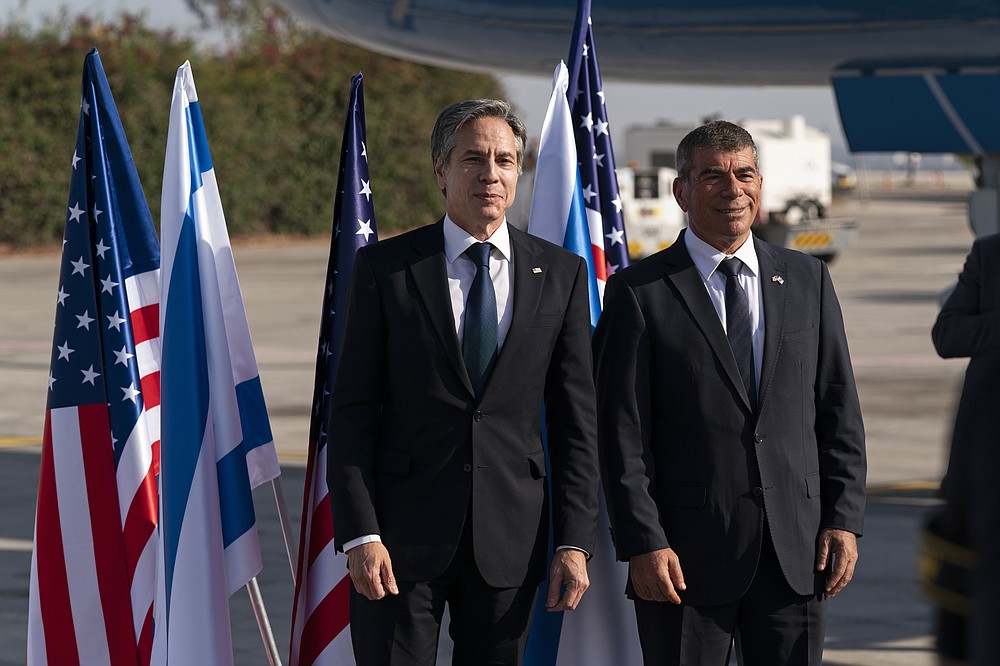 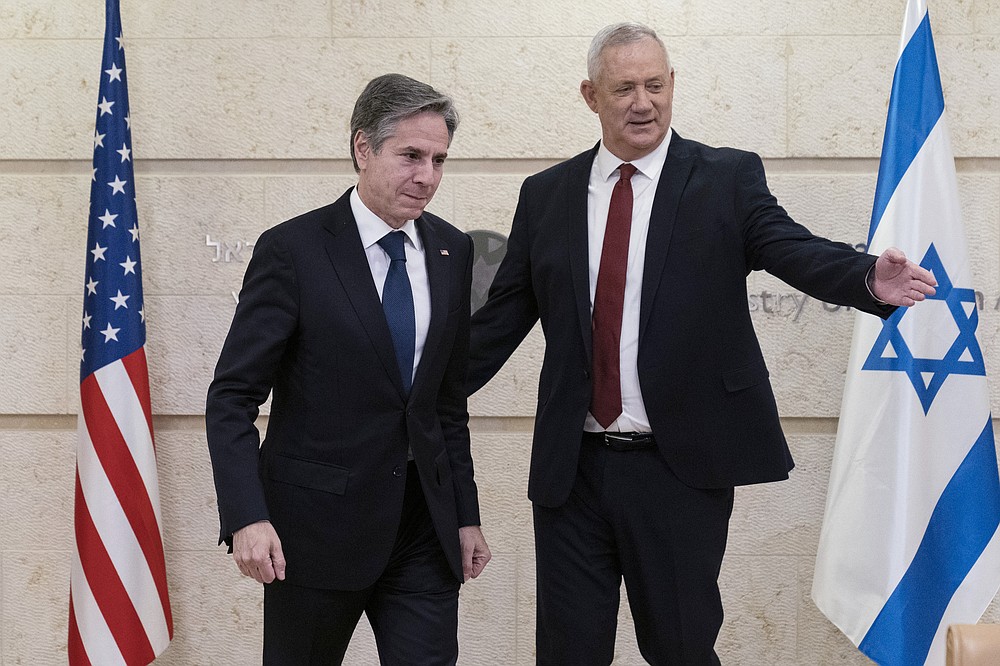 Secretary of State Antony Blinken and Defense Minister Benny Gantz move to take their seats before their meeting at the Ministry of Foreign Affairs, Tuesday, May 25, 2021, in Jerusalem, Israel. (AP Photo/Alex Brandon, Pool) 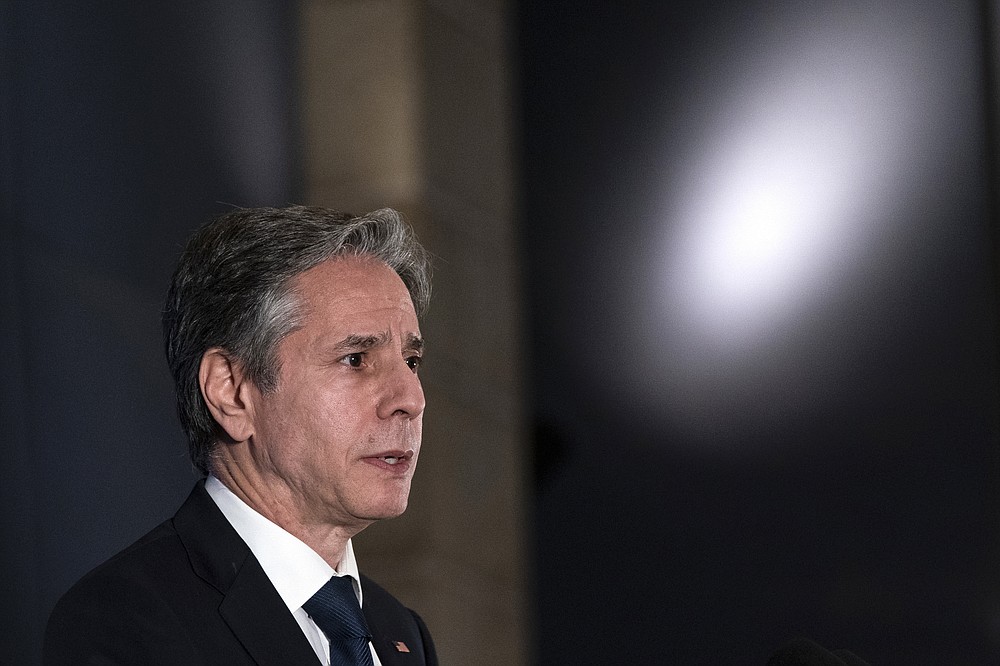 Secretary of State Antony Blinken speaks with reporters during a news conference at his hotel, Tuesday, May 25, 2021, in Jerusalem. (AP Photo/Alex Brandon, Pool) 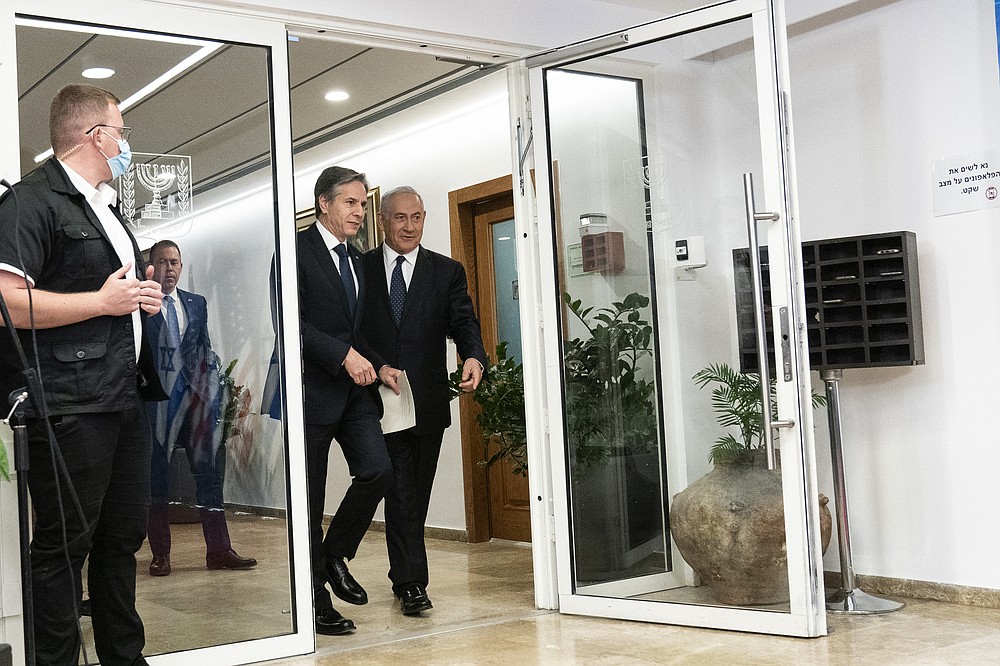