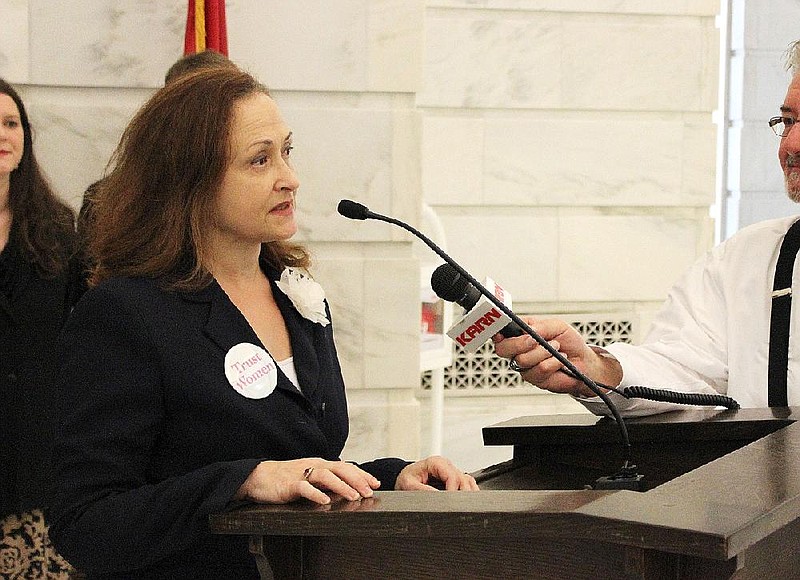 ACLU of Arkansas Executive Director Rita Sklar speaks at a news conference at the state Capitol in this file photo.

Back up: What does the law do?

Act 626, which was House Bill 1570 prior to its passage, prohibits the use of hormones and puberty-blocking drugs for youths. It also prohibits any type of gender-affirming surgical procedures, even though such procedures are not provided for youths in the state.

The statute is set to go into effect July 28 unless the court intervenes.

Why is the ACLU suing?

The ACLU is representing the families of four transgender youths living in Arkansas and two medical doctors and their patients. The organization asserts the law violates:

• All plaintiffs’ free speech protections under the First Amendment

Leading medical associations consider gender-affirming treatment best-practice and potentially life-saving care that positively affects mental health outcomes. The treatments that the law would ban as experiments are some that experts in gender-diverse health care say have been used successfully for decades.

Holly Dickson, executive director of the ACLU of Arkansas, said if the law is allowed to go into effect, it would force many families of transgender youths to leave the state to seek appropriate medical care.

What is the lawsuit seeking?

The lawsuit asks that the court enter a judgment declaring that the law is unenforceable because of the constitutional violations it presents, and that preliminary and permanent injunctions be granted to block its implementation.

The complaint also asks that the plaintiffs be awarded monetary compensation for costs and expenses, including attorneys fees.

"I will aggressively defend Arkansas's law which strongly limits permanent, life-altering sex changes to adolescents," Rutledge said in the statement. "I won't sit idly by while radical groups such as the ACLU use our children as pawns for their own social agenda."

Read more on the lawsuit from reporter Dale Ellis, and read about another lawsuit filed this week by the ACLU, this one challenging the state’s new abortion ban.