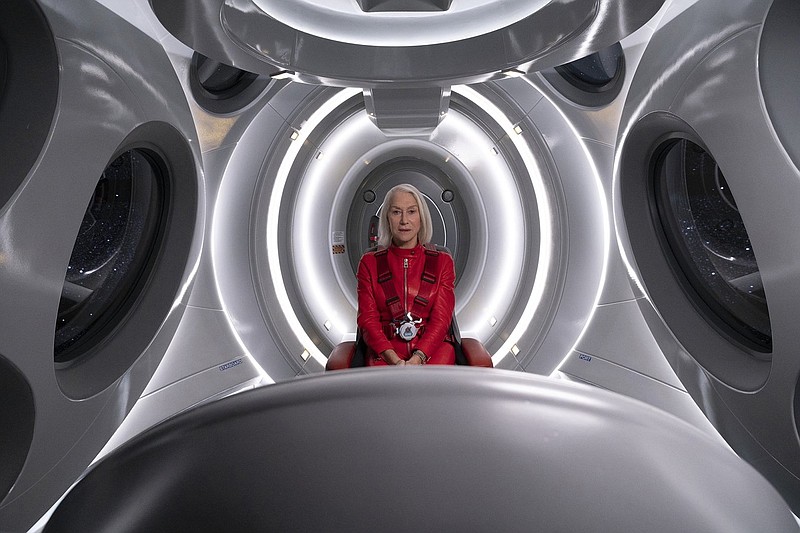 Helen Mirren is one of the actors appearing in “Solos,” a new sci-fi series streaming on Amazon Prime. (Amazon Prime Video/TNS/Jason LaVeris)

Amazon's new anthology series is called "Solos" even though, technically, no one is actually alone. Anne Hathaway, for example, shares a scene with additional versions of her character. Anthony Mackie plays two roles, acting only opposite himself. And Uzo Aduba and Helen Mirren converse with virtual assistants voiced by Jack Quaid and Dan Stevens, respectively.

Instead, the title of the profoundly insightful sci-fi series speaks to that innate human need to connect with other people. Created entirely during the pandemic, "Solos" is one of the few television projects to embrace the limitations of covid-safe filming for the sake of artistic experiment.

"In film and TV, it's incredibly rare to have a single character telling an uninterrupted, 30-minute story — it just doesn't happen," creator David Weil said. "But to be honest, the way I first fell in love with storytelling was listening to scary stories around the campfire with my brother, or hearing my grandmother share memories around the kitchen table. I wanted to create that feeling onscreen."

Spurred by the solitude of sheltering in place last spring, the "Hunters" showrunner began writing scripts with "the stories that are too difficult to share, whether because someone is too shy or embarrassed or ashamed," Weil said. "It became an exploration of, 'Who are we when we can actually be seen for the first time, when we can finally express our secret dreams and fears?'"

All seven episodes — written by Weil, Tori Sampson, Bekka Bowling and Stacy Osei-Kuffour — are set at various points in the future (they can be watched in any order, as long as the seventh episode is screened last, Weil suggested). Their individual settings justify each installment's isolation and the radical honesty they evoke.

"These are stories about people being alone, mentally," said production designer Ruth Ammon. "I tried to create bold and stylized spaces that felt a little familiar, but also had enough detail and room to tell a complete story, even though the camera is really staying within the same place the entire time."

Each episode was filmed over the course of a few days, with minimal crew, at Manhattan Beach Studios sound stages. "These wonderful actors were excited by the challenge to maintain dramatic impulse over the course of 30 minutes," said Weil, who also directed (as did Zach Braff, Sam Taylor-Johnson and Tiffany Johnson). "It's just them. There's nowhere to hide. So it's really on their shoulders to pull it off."

This was achieved with the help of performers who aren't seen onscreen. For example, the third episode was filmed with Mirren on set and Stevens in a sound booth, both present to react to their scene partner. And when Mackie was captured as a human character and a robotic replica, he acted opposite a double.

"He would be playing one character while, at the very same time, also thinking about how he was going to respond as the other character," Weil recalled of the second episode. "It was incredible, almost like watching someone play two instruments at the same time."

While numerous TV shows have explicitly incorporated covid into their narratives, only one "Solos" episode mentions a deadly virus. But "Solos" is very much a pandemic-related series in that it echoes the emotional experience of surviving forms of social isolation. "It's a time capsule of a moment we were living in, and many people around the world are still living in, because all these universal feelings like hope and fear and loneliness were heightened during this awful time," Weil said.

"But ultimately, these stories are both exhortations and cautionary tales to what our lives were before the pandemic and also what they can be afterward," he continued. "At least in America, as we're moving toward opening back up and rolling out vaccines, I wanted this to encourage an introspection and reflection: Is there a loved one you haven't spoken to in some time, and maybe want to reconnect [with] after watching this? Or is there a dream you've always had that, after watching, you might be more energized and to pursue that passion?

"For me, working on 'Solos' has taught me to not be afraid to create pieces that are maybe a little different and really lead with emotion," he continued. "I hope it inspires people to be a bit bolder and live more truthfully, in whatever way feels right for whoever is watching."