OPINION | TAKEOUT TASTINGS: Back to the to-go basics

Exploring the nearly post-pandemic takeout landscape with doughnuts, chicken, wings and burgers by Eric E. Harrison | May 27, 2021 at 5:48 a.m. 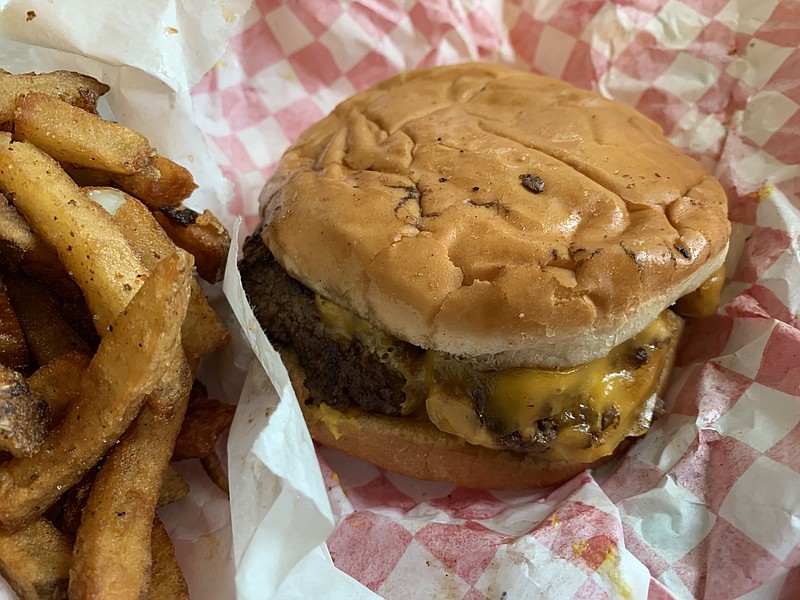 The cheeseburger basket at the Box comes with a cheeseburger, fries and a soft drink. (Arkansas Democrat-Gazette/Eric E. Harrison)

Just because we're sticking our vaccinated toes into a couple of restaurant dining rooms for full reviews does not mean we've totally abandoned the takeout trail.

As per our usual practice, we've stuck primarily to local establishments, within a safe hot-food distance of our dining table, and have paid for all our to-go meals up front.

WHAT WE GOT: Cheeseburger basket ($8.75), with fries and a drink

This burger joint, established in 1948 as the Band Box, is so venerable it wouldn't just disappear after it was deposed from 17th and Main to make room for a Walgreens. It relocated (admittedly after a two-year delay) on West Seventh Street, and brought along most of its employees and enough of its atmosphere. It's still churning out great burgers, acclaimed by some as the best, or among the best, in town, including the cheeseburger we recently chowed down on, a perfectly grilled patty topped with melted American cheese, mustard and pickle (holding the onions at our express request). The seasoned fries were expertly crisped on the exterior and soft on the interior, and there were plenty of them.

HOW IT WENT: The dining room is now open, so we placed our order (a little later in the lunch cycle) with the one front-of-house person. It took close to 15 minutes for our burger and fries to emerge from the open grilling area, and a few more minutes before the combination waitress-cashier-telephone answerer could pay it enough attention to bag it up and hand it over.

HOW IT'S GOING: There were half-a-dozen occupied tables and a couple of other to-go orders. 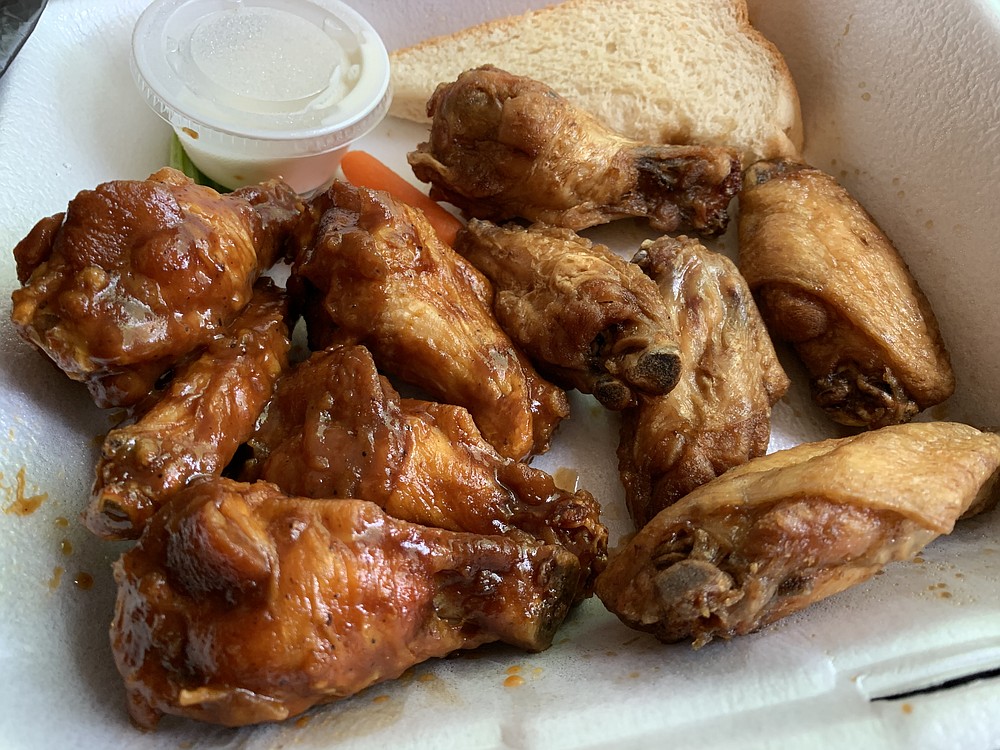 Our 10-wing combo from Great American Wings in Park Plaza may not have been our order — the potato-salad side was missing and half our wings weren't sauced. (Arkansas Democrat-Gazette/Eric E. Harrison)

These are good wings. They're meaty, they're hot (as in still hot out of the fryer, not necessarily spicy unless you order them that way) and they taste good. It's pretty evident that a mall food court kiosk may not have found its post-mid-pandemic figurative feet. We tried to order our 10 wings split evenly in teriyaki and spicy lemon pepper, but they were out of spicy lemon pepper so we ordered honey BBQ instead. That's not exactly what we got ...

HOW IT WENT: ... When we got home and opened our foam clamshell, we found 10 wings, but not the side item we ordered — we got a little cup of ranch dressing, but no potato salad. Half the wings had sauce — we're still not sure what kind — and half were naked. Did they screw up back in the kitchen? Did somebody else get our order? We likely will never know ...

HOW IT'S GOING: ... in part because there were a couple of customers ahead of us and a couple behind us, and we didn't get a chance to compare notes. 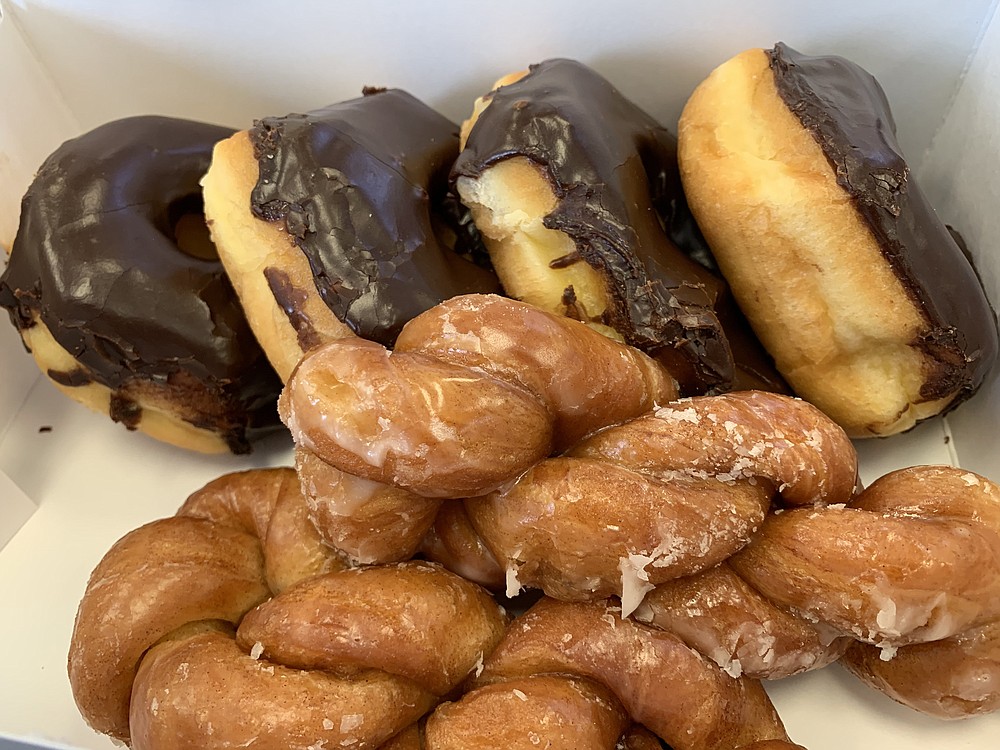 This wasn't exactly our choice, but by 10:30 on a Saturday morning, with customers waiting in a line of cars that stretched back onto the side street, that's what was left. Glazed? Long gone by then. So we took the suggestion of the young man at the window and cleaned out the four remaining chocolate iced doughnuts and took two cinnamon twists, and we were glad to get that.

Mark's has long had the reputation of being the best doughnut shop in town, but it has always been a bit out of our normal trade route in the mornings — they're only open until 11 a.m. (unless they sell out, and they're closed on Sunday); even under non-pandemic conditions, it's not ordinarily on our way to or from anyplace; and there are Shipley's outlets, which produce a similar style of doughnut, though not as large and not as fluffy, a lot closer to where we live and work. But we happened to be in North Little Rock that Saturday and decided to drop in.

HOW IT WENT: Only the drive-thru window is open. We waited in a line of cars for 25 minutes.

HOW IT'S GOING: You should have seen the treatment the other customers gave the guy who turned into the side street next to the bakery and tried to jump the line. Whooo boy. 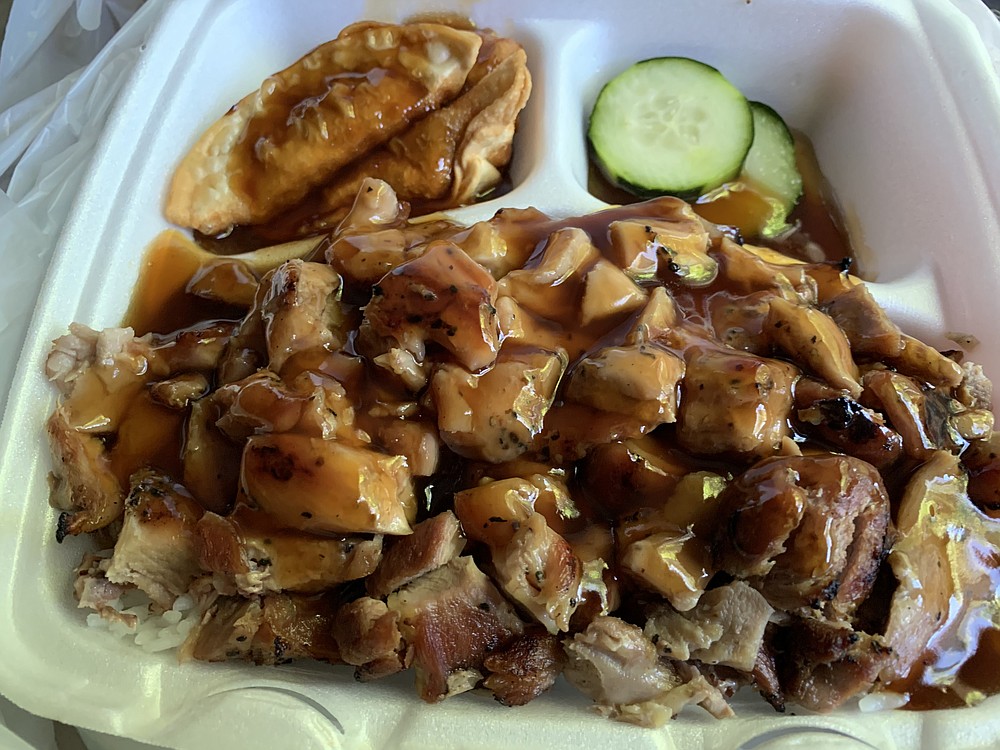 The chicken and gyoza combo was our long-time go-to to-go dish from Big on Tokyo in the River Market Ottenheimer Market Hall, so we went back to it now that the market hall has reopened. (Arkansas Democrat-Gazette/Eric E. Harrison)

Big on Tokyo was one of the first places to open in the Market Hall, originally in a free-standing kiosk in the middle of the floor, and then in a smaller kiosk on the hall's north side. It's been one of our go-to place for a quick, filling, tasty lunches until the pandemic closed the hall last spring. It was good to go back, both for us and for the guys working there, who expressed considerable pleasure in seeing us.

And though they've broadened the menu over the years, the chicken and gyoza combo has pretty much always been our go-to item — a grilled chicken breast chopped into bite-size bits, served over rice, and with three deep-fried Japanese dumplings and a couple of cucumber slices on the side, all topped with a slightly sweet, slightly tangy teriyaki sauce.

HOW IT WENT: What, in the past, has always determined the wait time is the gyoza, which the crew pops into the fryer as ordered, and usually takes about 4-5 minutes to complete. Sometimes, if there were too many orders and not enough already-grilled chicken to complete the order, it might take a few minutes more for the chicken to come off the grill. There was plenty of chicken, however, so we got in and out in about five minutes.

HOW IT'S GOING: The Market Hall had only recently reopened and only a handful of kiosks were actually up and running — several more were sporting signs saying "Open Soon." So there were only a handful of customers, a couple of whom were ahead of us.