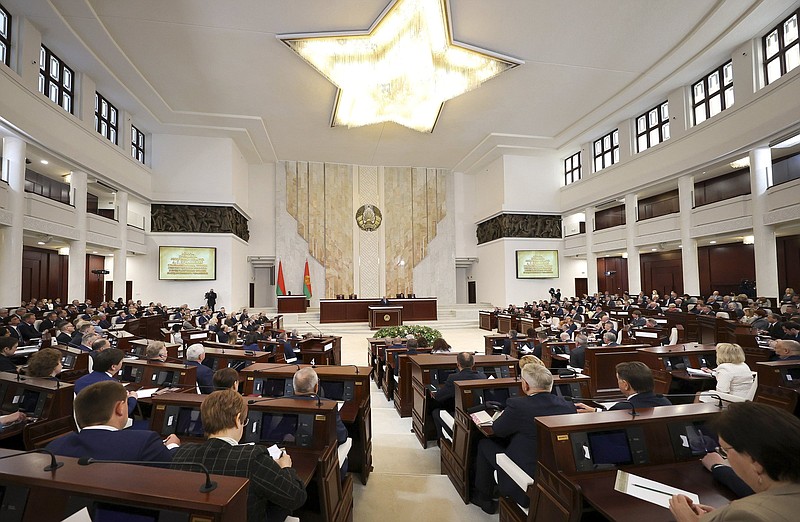 “I acted lawfully and was protecting the people according to all international rules,” Belarusian President Alexander Lukashenko (rear center) told the parliament Wednesday in Minsk. (AP/BelTA/Sergei Shelega)

MOSCOW -- A defiant President Alexander Lukashenko addressed the Belarusian parliament Wednesday morning to defend the forced diversion of a Ryanair plane to Minsk, which pushed Belarus further down the path to becoming an international pariah.

The skies over Belarus are empty as more and more foreign airlines cut traffic in response and European Union officials discuss fresh sanctions.

"I acted lawfully and was protecting the people according to all international rules," Lukashenko said in his first public appearance since the incident and the subsequent arrest of a dissident journalist and his partner who were on the flight.

Lukashenko, who has ruled the country since 1994, suggested that by diverting the plane, he also prevented a potential nuclear catastrophe, as the airliner could have triggered the defense systems on the country's Astravec power plant.

He also slammed the West's retaliation as an attempt to "suffocate" Belarus in an act of "hybrid war."

"As we predicted, ill-wishers from outside and inside the country have changed their ways of attacking our country," Lukashenko said. "They crossed many red lines, crossed the boundaries of common sense and human morality."

The Belarusian leader said the decision to intercept the plane filled with Lithuanian tourists returning from Greece was prompted by a bomb threat, which he now claims originated from Switzerland.

Belarusian officials previously said the threat was issued by email from Hamas, the militant Palestinian organization ruling the Gaza Strip. Hamas has denied the accusation.

The alleged Hamas email was from a ProtonMail address. The encrypted email service is based in Switzerland.

Lithuanian officials said the pilot diverted the plane to Minsk after the control tower told him the explosive would go off if he landed in Vilnius. Belarus scrambled a MiG-29 jet to escort the plane.

Upon landing, no bomb was found. The international community has cast doubt on whether the threat was real, linking the forced diversion of the airliner to the subsequent arrest of two of its passengers: journalist and Lukashenko critic Raman Pratasevich and his girlfriend, Russian citizen Sofia Sapega.

Since the arrests, pro-government Belarusian outlets have released "confessional videos" in which Pratasevich and Sapega are shown admitting to organizing mass riots and managing opposition Telegram channels.

In the video, Pratasevich's face appears to be marked with abrasions and bruises. The journalist's father, Dmitry Pratasevich, told Reuters that his son's nose appeared to have been broken and that his behavior was out of character.

The confessions have been met with skepticism from scholars, family members and human-rights groups. They say that there is little doubt that the confessions were coerced.

In his speech Wednesday, Lukashenko indicated that more "confessions" supposedly confirming the plot to destabilize Belarus would be published soon.

International pressure on Belarus is mounting as the U.N. Security Council is expected to meet behind closed doors later Wednesday to address the incident.

NATO on Wednesday also condemned the Sunday incident, saying that it "seriously violated the norms governing civil aviation and endangered the lives of the passengers and crew," and called for the release of Pratasevich and Sapega.

Turkey used its veto power to block any practical action by NATO against Minsk, which retained its formal partnership with the alliance, according to two diplomats who spoke on the condition of anonymity because the discussions were private.

Several European countries, including Britain and France, have closed their skies to the Belarusian state airline Belavia. On Wednesday, a Belavia flight bound from Minsk to Barcelona turned back after Poland -- which permits Belavia overflights -- said the plane may not be able to enter French airspace, the airline said in a statement.

Exiled opposition leader Svetlana Tikhanovskaya said Wednesday that the Belarusian opposition is preparing for a new round of anti-government protests later in the year.

Mass protests were held against Lukashenko last summer after he declared victory in a presidential election that the opposition said was rigged. The demonstrations have dwindled after the authorities launched a brutal crackdown, beating and arresting hundreds of activists.

"The regime is nearing a total isolation like never before," Tikhanovskaya said in a statement posted on the Telegram app. "There's nothing more to wait for - we have to stop the terror once and for all."

Lukashenko, however, has one stalwart backer -- Russian President Vladimir Putin, whom he is scheduled to meet Friday in the resort town of Sochi.

Russian officials lined up to express firm support for the Belarusian leader, describing his explanation for landing the plane in Minsk as "reasonable."

The Kremlin said Wednesday that it has "no reason" to doubt Minsk's claims that the bomb threat came from Hamas or Switzerland.

Information for this article was contributed by Michael Birnbaum of The Washington Post.