More express discontent with WHO-China inquiry by Compiled Democrat-Gazette Staff From Wire Reports | May 27, 2021 at 7:09 a.m. 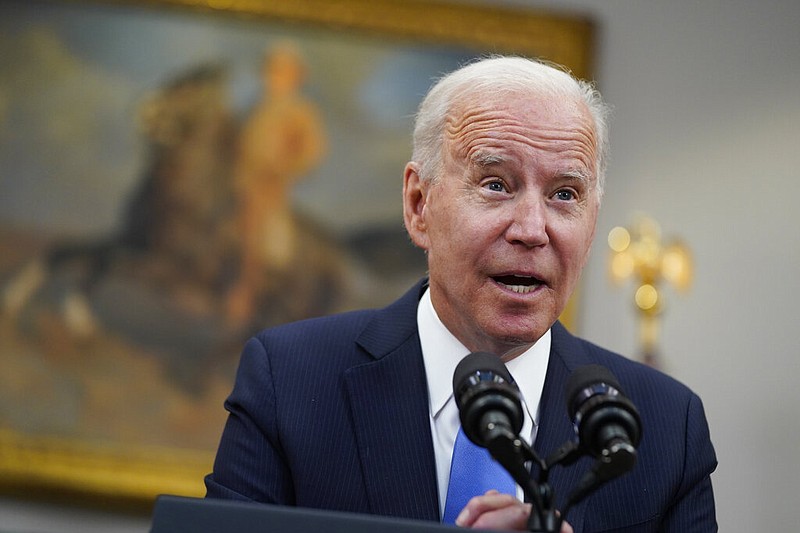 President Joe Biden speaks in the Roosevelt Room of the White House in Washington in this May 13, 2021, file photo. (AP/Evan Vucci)

WASHINGTON -- President Joe Biden on Wednesday asked U.S. intelligence agencies to "redouble their efforts" to determine the origins of the coronavirus, saying in a statement that he was calling for a broad government report that incorporated findings from American labs and other federal agencies on whether the virus was accidentally leaked from a lab or transmitted by an animal to humans.

He asked intelligence officials to report back to him in 90 days on the results of their work and to keep Congress "fully apprised."

Biden's statement was made as top health officials renewed their appeals this week for a more rigorous investigation into the origins of the virus, as the World Health Organization faced mounting criticism for an earlier report dismissing the possibility that it had accidentally escaped from a Chinese laboratory.

In his statement, Biden said that he had asked his national security adviser in March to task intelligence officials with a report on their latest analysis of the virus's origins, which he said he received earlier this month before asking for "additional follow-up." He said the intelligence community had "coalesced around two likely scenarios" but not definitively answered the question.

"Here is their current position: 'while two elements in the [intelligence community] leans toward the former scenario and one leans more toward the latter -- each with low or moderate confidence -- the majority of elements do not believe there is sufficient information to assess one to be more likely than the other,'" Biden said.

The calls from Biden and top American health officials were the latest in a series of White House demands in recent months that any such inquiry be free from Chinese interference. But they drew additional attention as some scientists have expressed a new openness to the idea of a lab accident and the WHO grappled with how to respond.

Xavier Becerra, the U.S. health and human services secretary, said at an annual meeting of the WHO on Tuesday that preparing for the next pandemic required a fuller study of the origins of this one.

"Phase two of the covid origins study must be launched with terms of reference that are transparent, science-based and give international experts the independence to fully assess the source of the virus and the early days of the outbreak," Becerra said.

Andy Slavitt, one of Biden's top coronavirus advisers, was more pointed in his criticisms of the WHO and China. A joint WHO-China inquiry whose findings were released in March dismissed as "extremely unlikely" the possibility that the virus had emerged accidentally from a laboratory.

[Video not showing up above? Click here to watch » https://www.youtube.com/watch?v=aQ-GakabSGg]

"We need to get to the bottom of this and we need a completely transparent process from China," Slavitt told reporters Tuesday. "We need the WHO to assist in that matter. We don't feel like we have that now."

"Our intelligence community has been looking at this now for 15 months. They've done good work on it, but in the end the answer lies in the hands of Chinese communists, not people working for American intelligence agencies," he said.

Officials in Beijing have not been forthright about what happened, he said.

"We should be insisting that they come clean, that they provide us a clear and unvarnished look at what was happening in the Wuhan labs," Cotton said.

Suggestions that the coronavirus may have been accidentally carried out of a laboratory in late 2019 in the Chinese city of Wuhan were largely drowned out last year by scientists' accounts of its likely path from an animal host to humans in a natural setting.

Many scientists believe that a so-called spillover event remains the most plausible explanation for the pandemic. But the joint inquiry by the WHO and China did not settle the matter: The Chinese government repeatedly tried to bend the investigation to its advantage, and Chinese scientists supplied all the research data used in the final report.

In another sign of shifting attitudes, the Senate approved two Wuhan lab-related amendments without opposition, attaching them to a largely unrelated bill to increase U.S. investments in innovation.

One of the amendments, from Sen. Rand Paul, R-Ky., would block U.S. funding of Chinese "gain of function" research on enhancing the severity or transmissibility of a virus. Paul has been critical of Dr. Anthony Fauci, the government's top infectious-disease expert, and aggressively questioned him at a recent Senate hearing over the work in China. The other amendment was from Sen. Joni Ernst, R-Iowa, and it would prevent any funding to the Wuhan Institute of Virology.

Both were approved without roll-call votes as part of the broader bill that is still under debate in the Senate.

As for the origin of pandemic, Fauci said Wednesday that he and most others in the scientific community "believe that the most likely scenario is that this was a natural occurrence, but no one knows that 100% for sure."

"And since there's a lot of concern, a lot of speculation and since no one absolutely knows that, I believe we do need the kind of investigation where there's open transparency and all the information that's available, to be made available, to scrutinize," Fauci said at a Senate hearing.

Dr. Francis Collins, the National Institutes of Health director, criticized the WHO report while testifying to Senate lawmakers Wednesday on the agency's budget.

"It is most likely that this is a virus that arose naturally. But we cannot exclude the possibility of some kind of a lab accident. That's why we've advocated very strongly that WHO needs to go back and try again after the first phase of their investigation really satisfied nobody," Collins said. "And this time we need a really expert driven, no-holds-barred collection of information, which is how we're mostly really going to find out what happened."

The State Department, which ended one Trump-era investigation into the Chinese lab theory this spring, said it was continuing to cooperate with other government agencies and pressed China to cooperate with the world.

"China's position that their part in this investigation is complete is disappointing and at odds with the rest of the international community that is working collaboratively across the board to bring an end to this pandemic and improve global health security," said spokesman Ned Price.

On Wednesday, Zhao Lijian, a Foreign Ministry spokesman, sidestepped a question about whether the WHO would be permitted to do further investigation in China, saying that an "authoritative study report" with "many significant conclusions" had already been issued.

Instead, Zhao sought to deflect attention from China, pointing to what he called the reports of covid-19 being detected as early as 2019 in other parts of the world. He also referred again to the baseless theory that the virus came from a U.S. Army lab.

"China takes the origin-tracing work seriously with a responsible attitude, and has made positive contributions that are widely recognized," Zhao said. "If the U.S. side truly demands a completely transparent investigation, it should follow China's lead to invite the WHO experts to the U.S."

The Chinese embassy in Washington, without mentioning the Biden order, accused unnamed political forces of being fixated on a blame game while ignoring the urgent need to combat the pandemic.

"Smear campaign and blame shifting are making a comeback, and the conspiracy theory of 'lab leak' is resurfacing," it said in a statement posted Wednesday on its website.

In early March, several scientists calling themselves the Paris group released an open letter calling for an inquiry separate from the team of independent experts sent to China as part of the WHO investigation.

This month, 18 scientists said in a letter published in the journal Science that there was not enough evidence to decide whether a natural origin or an accidental laboratory leak caused the coronavirus pandemic.

After the findings of the joint inquiry by China and the WHO were released in March, the director of the WHO, Dr. Tedros Adhanom Ghebreyesus, conceded that the lab leak theory required further study, saying he did not believe that "this assessment was extensive enough."

And countries including Australia, Germany and Japan have continued at this week's WHO meeting to call for firmer steps toward a more comprehensive investigation.

Information for this article was contributed by Benjamin Mueller, Noah Weiland, Michael D. Shear, Julian E. Barnes and Carl Zimmer of The New York Times; by Zeke Miller, Aamer Madhani, Christina Larson, Matthew Lee and Lisa Mascaro of The Associated Press; and by Frank E. Lockwood of the Arkansas Democrat-Gazette.