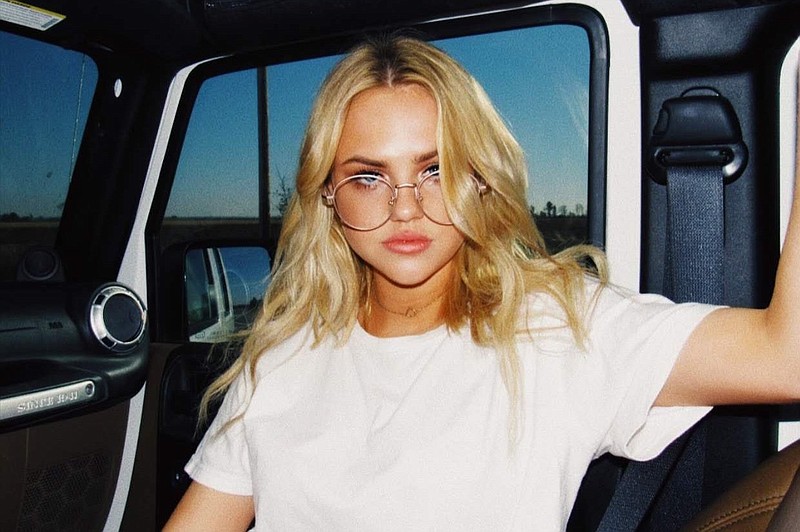 Emilee, aka Emilee Flood, from Batesville is the voice behind the hit song “ILY” with Surf Mesa. Tonight, she’s competing against some heavy hitters in the top dance-electronic song category at the “iHeart Music Awards,” airing at 7 p.m. on KLRT-TV, the local Fox affiliate. (Special to the Democrat-Gazette)

An Arkansas singer went head to head with Lady Gaga and Ariana Grande at last week's "Billboard Music Awards," competing against the pop music titans in the top dance-electronic song category. The Arkansan came up empty handed, but so did Gaga and Grande. The award went to quirky singer Saint Jhn for her song "Roses."

Emilee Flood, who uses only her first name for her music, is a Batesville native with an amazing story about how her hit song "ILY" with Surf Mesa came about. After tonight, Emilee could have another amazing story to tell if she wins at the "iHeart Radio Music Awards" for top dance-electronic song when it airs at 7 p.m. on Fox. She's up against the same singers for this award.

[Video not showing up above? Click here to watch: arkansasonline.com/527emilee]

[Listen to Emilee’s version of “I Love You Baby”: arkansasonline.com/527emilee2/]

Your voice on "ILY" by Surf Mesa is all over the radio right now and I bet no one knows it's coming from a young woman from Batesville. Introduce yourself.

My name is Emilee Flood, I was born and raised in Batesville. I currently live in Austin, Texas, with my husband, Edgar. I've been making music since the beginning of 2019 and ventured more into TikTok and YouTube early 2020.

Obviously, you've had a really good year despite the pandemic.

The past year has been moving at a very fast pace! I've had some pretty amazing opportunities like receiving a platinum record, performing on the James Corden "Late Late Show" with Karol G and Ludacris, and getting nominated for an iHeart music award. I am unbelievably grateful for the fact that all of this came from me singing in my bedroom. Anyone can become whatever they want, just never give up on your dreams.

Is electronic dance music or pop your preferred genres of music?

I wouldn't consider myself a "pop" star. Even though the song that everyone knows me by is in the EDM/dance genre and on all the pop charts, I wouldn't say that's necessarily the genre of music I personally make. I'm honestly not quite sure what I would call my genre of music. It's definitely more indie/bedroom pop than mainstream pop. Or maybe it's just somewhere in the middle.

You were nominated with Surf Mesa for top dance song at the Billboard Music Awards last week and the IHeart Music Awards airing tonight. You are competing with the likes of Lady Gaga and Ariana Grande among others. What's next?

I'm currently working on a few songs and some new music videos. I don't want to spoil anything but just know I'm working on some cool stuff! 2021 is definitely going to be a big year!

How did your rendition of Frankie Valli's "Can't Take My Eyes Off of You" end up sampled on one of the year's biggest dance songs?

The "ILY" song came about in such a crazy and unexpected way. I was sitting in my bedroom one day in November of 2019 and decided to post a TikTok of me singing a cover of "Can't Take My Eyes Off of You" by Frankie Valli. It started picking up a lot of traction and got over a million views in just one day. As it continued to grow, Powell Aguirre, better known as Surf Mesa, messaged me on Instagram saying he had made a remix using the vocals from my TikTok. A few months pass and the song gets signed to a record label! This was such a once in a lifetime opportunity and it honestly still doesn't feel real. In this generation, we can really do whatever we put our minds to. I just want people to look at my story and get inspired to live out their dreams, even if they're from a tiny town in Arkansas.

Were you always into music and performing while growing up in Batesville?

Growing up, I was a very shy and quiet kid. I'm still pretty quiet but you won't catch me hiding behind my parents legs anymore. I graduated from Batesville High School in 2018. You'd think that I might've been in theater or choir, but I was super awkward in high school and didn't really ever put myself out there. I had my small circle of friends and went to my classes. I didn't start posting videos of me singing until my senior year. It was super scary and I was so nervous of what people would think, but everyone was very supportive and that gave me a boost of confidence to post more.

Do you enjoy going back to that small town after living in the big city of Austin?

Almost my whole family still lives in Batesville. It's so nice to go visit and see how big my little cousins have grown. My parents have been my biggest supporters since the start. I'm so grateful to have such amazing parents. I definitely miss them and everyone else while living here in Texas, but the thing about Batesville that I love and miss so much is how I can go out for a walk downtown and be greeted by so many familiar faces. Getting coffee at the local shops and all of the amazing thrift stores will never be beat by a big city.