Gum knew time at Central Arkansas had run its course 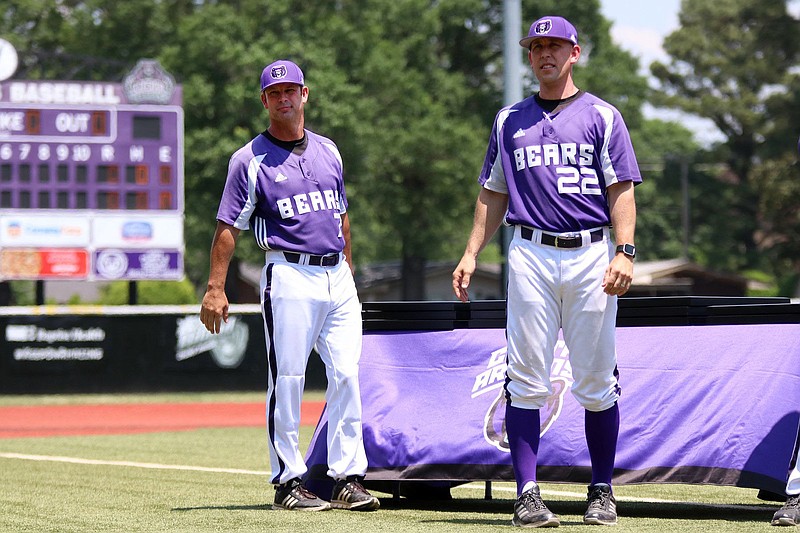 The decision by Allen Gum (left) to step down as Central Arkansas’ baseball coach after 11 seasons was announced Sunday. Nick Harlan (right), UCA’s pitching coach for nine seasons, will take over the position. (Photo courtesy of UCA Athletics)

CONWAY -- At each of his previous stops coaching across the state -- from Sheridan High School to Batesville to the University of Southern Arkansas -- Allen Gum knew when it was time to go. The winningest baseball coach at the University of Central Arkansas couldn't always pinpoint the exact reason, but he always recognized the turning point.

That same realization started to set in the past few years with Gum and the Bears. When he returned this season after covid-19 canceled most of the 2020 campaign, he knew 2021 would be his last at UCA.

"There's some personal reasons that I'm not going to speak on," Gum said in the press box above the field at Bear Stadium on Wednesday. "But my feet weren't hitting the floor to get up and do the nonstop, relentless recruiting the same way. Some of the parts on the professional side had just kind of faded."

The program announced his departure Sunday after 11 seasons and 310 wins in Conway, one day after the Bears closed out the year with a 5-4 victory over McNeese State. Gum, 51, exits at the end of a season that saw UCA miss the Southland Conference Tournament for only the second time since his arrival. He will be replaced by associate head coach Nick Harlan.

Gum informed UCA Athletic Director Brad Teague about his plan to leave prior to the season, and Harlan and fellow assistant Justin Cunningham were among the few aware of the decision. Gum's players and the remainder of his staff found out Sunday in a meeting at nearby Perspective College Ministry, where Gum spoke to them about endings -- the end of a season, the end of a team, the end of an era.

UCA classified the move as a "retirement," but Gum isn't done. He intends to take the next year to reset while figuring out what's next while continuing to raise money for the program. He maintains that a place in the sport remains in his future.

"This is my halftime," Gum, who led the Bears to the 2013 Southland title, said. "As far as baseball goes in this state, I'm just getting warmed up."

Conway is where he met his wife Lindsey -- a UCA graduate -- and where his two children were born. When Harlan received offers in recent years for coaching jobs elsewhere, the program and community kept him in Conway.

"The town and the school and the state, it just means so much to us," Harlan said. "To be able to plant roots here is special."

When Harlan arrived at UCA from the NAIA level, he had to teach himself how to become a Division I pitching coach. He learned the intricacies of developing pitching routines for his players, picked the brains of Gum and pitching coaches across the country, and came to understand how to use technology to help his pitchers add speed to a fastball or spin to a breaking pitch.

He also learned how to motivate his pitching staff.

"He figured out how to develop a mindset for all of us," Cody Davenport, a former UCA pitcher and current director of player development, said. "There was a culture and a family atmosphere among us. I think he'll bring that to the entire program."

Although the role of pitching coach was new to Harlan in 2013, taking over as head coach feels like a walk in his comfort zone.

"I feel more in my sweet spot as a leader," he said. "One of my passions is developing men and driving a culture. The opportunity to create an identity and communicate a message every day, and develop relationships with each player is where I feel most at home."

Gum transformed the program Harlan now takes over during his decade in charge, turning the Bears into consistent Southland contenders and taking them to their first NCAA regional appearance in 2013. Still settling into his title of former head coach, Gum asserted Wednesday that the next goal for the program is to reach the NCAA Tournament in Nebraska.

Harlan wasn't ready to set specific goals, instead focusing on the shared values he and Gum have instilled into the program.

"My job is to help develop men, to prepare them for life after UCA," Harlan said. "I get to do that through the game of baseball. I use baseball as a platform to teach character traits -- work ethic, discipline, toughness, humility and respect. If we do those things and respect the game, the results will take care of themselves."