Arkansas advances to SEC Tournament semifinals with win over Vanderbilt 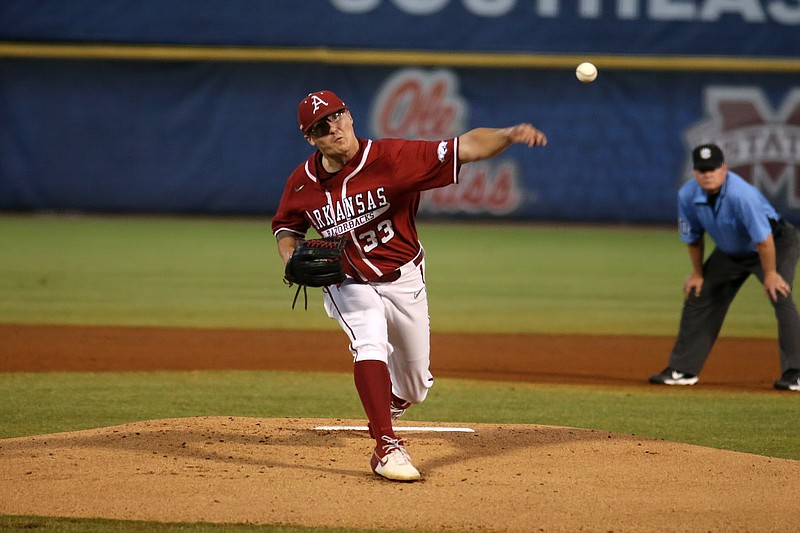 Patrick Wicklander delivers a pitch during Arkansas' game against Vanderbilt in the SEC Tournament in Hoover, Ala. on Friday, May 27, 2021. (Picture courtesy SEC media pool.)

Arkansas won college baseball’s most anticipated game of the year Thursday night at the SEC Tournament.

The top-ranked Razorbacks defeated No. 3 Vanderbilt 6-4 at Hoover (Ala.) Metropolitan Stadium.

Arkansas advanced to Saturday’s tournament semifinals, where it will play either Vanderbilt or Ole Miss. The Commodores and Rebels will play in an elimination game Friday at approximately 1:30 p.m.

The Razorbacks (44-10) scored five runs against Vanderbilt All-SEC pitcher Kumar Rocker and overcame a two-run deficit in the first inning.

Matt Goodheart snapped out of a 1-for-30 slump with a two-run double in the fourth inning to give Arkansas a 4-3 lead. Cullen Smith added a two-out RBI single to score Goodheart to close the book on Rocker, who was taken out of the game after 3 1/3 innings.

Arkansas closer Kevin Kopps recorded his ninth save with a three-inning outing in his first appearance since he was voted SEC pitcher of the year. Kopps did not allow a base runner and struck out five in 30 pitches.

With the Razorbacks leading 6-4, Kopps inherited a runner on first base and a 2-0 count against Vanderbilt leadoff hitter Enrique Bradfield in the seventh inning. He struck out Bradfield before a couple of groundouts, and the Commodores (40-14) never threatened again.

Vanderbilt took a 2-0 lead in the first inning when CJ Rodriguez doubled with two outs against Arkansas starter Patrick Wicklander. Rodriguez came to the plate after Razorbacks center fielder Christian Franklin lost a two-out fly ball in the lights to extend the inning.

Arkansas tied the game with two runs in the second inning. Ethan Bates’ one-out single scored Franklin, who walked to lead off the inning, and Rocker forced home a second run when he hit Goodheart in the helmet with the bases loaded and two outs.

Bates, a freshman who started for the second time against an SEC team, added a sacrifice fly in the fifth inning to answer a solo home run by Vanderbilt’s Isaiah Thomas in the top of the inning. Thomas’ home run pulled the Commodores within 5-4, but Bates restored the Razorbacks’ two-run lead.

Vanderbilt went ahead 3-2 in the top of the fourth when Arkansas reliever Ryan Costeiu walked Jayson Gonzalez with the bases loaded. Costeiu inherited the bases loaded from Wicklander, who was removed after 3 2/3 innings.

Wicklander allowed 5 hits, walked 3 and struck out 1. He was coming off one of the best outings of his career — an 11-strikeout performance against Florida last Thursday.

Either Arkansas (10 weeks) or Vanderbilt (3) have been ranked No. 1 in the USA Today Baseball Coaches Poll for the past 13 weeks. The two teams held the top two spots in the rankings for 12 consecutive weeks until Monday, when the Commodores were passed by Texas for second place.

Thursday's game was the first between Arkansas and Vanderbilt this season.

The Razorbacks, who are the favorite to be the No. 1 overall seed in next week's NCAA Tournament, improved to 18-4 this season against ranked teams.

Kevin Kopps comes in and shuts down Vanderbilt. He gets two strikeouts and a groundout to short to end it.

Webb barrels up a ball to left field, but it comes up just short of the fence for the first out.

Battles strikes out for the second out.

Nesbit works a walk and Goodheart flies out to Bradfield in center to end the inning.

Kopps is doing what he's done all year long. He strikes out two batters and gets a first pitch ground ball to short in the eighth inning.

Smith walks to start the inning.

Franklin grounds into a 6-4-3 double play to erase the leadoff walk.

Moore singles to left for his second hit of the day.

Opitz pops up foul to the third baseman and that ends the seventh.

Webb goes in to left, Nesbit in at third for Arkansas and Wallace moves to right.

Monke then throws two balls to the next batter and Van Horn is going to the bullpen to get Kevin Kopps.

Kopps throws three straight strikes to Bradley to strike him out looking.

Thomas grounds to short on what should have been a double play, but Battles bobbles the ball. He does get the lead runner though.

Graham grounds out to third to end the inning.

Nelson Berkwich in to pitch for the Commodores.

Gregory strikes out swinging, Goodheart grounds out to second and Wallace flies out to right. Arkansas goes in order for just the second time today.

Monke comes in to pitch for Costeiu.

He walks one, but gets a strikeout and a 4-6-3 double play to end the inning.

Moore walks on a full count to start the fifth.

Moore gets to second on ball in the dirt and then is moved to third by Opitz as he grounds out to second.

Bates hits a deep fly ball to center that is caught, but Moore tags and pushes Arkansas' lead back to two.

Battles flies out to center and that's it for the Hogs in the fifth.

Vanderbilt immediately gets a run back with a homerun to left-center field. It didn't look like Thomas hit that ball great, but he gets enough to muscle it over the fence.

Costeiu bounces back to get two strikeouts. He then fields a ball on the right side and takes it himself to first to get the out.

Bates walks to start the inning.

Battles singles up the middle, Bates goes to third and Battles slides in safely to second.

Gregory chases a ball in the dirt to strikeout for the first out of the inning.

Matt Goodheart breaks out of his slump with a double off the wall in left. Two runs score, the Hogs take the lead 4-3 and Rocker is done. It's his shortest outing of the season.

Chris McElvain in to pitch for Vanderbilt.

Wallace strikes out swinging for the second out.

Smith loops a single down the right field line and Goodheart comes around to score easily to give Arkansas a 5-3 lead.

Franklin pops up behind the pitcher's mound to end the inning.

Wicklander gets the first two batters on a pop up and a foul out.

Ryan Costeiu in to pitch for Arkansas.

Costeiu walks the first batter he faces on another close pitch, this one looked like a ball and Vandy leads 3-2.

Costeiu gets a groundout to second to end the inning.

Smith flies out to the warning track in right on the first pitch to start the third.

On a 1-2 pitch Franklin takes off, the pitch gets by the catcher so Franklin picks up the stolen base.

Moore strikes out swinging on a full count fastball for the second out.

Opitz hits one on a line, but the left fielder catches it on the run in the left-center field gap to end the inning.

Wicklander throws just eight pitches to retire the Commodores in order in the third.

He got a fly out to right, groundball to short and a pop out to second in the inning.

Arkansas has its first runner of the game as Franklin walks on a full count.

Moore gets the first Arkansas hit with a single to right. Runners on first and second with nobody out.

Opitz strikes out swinging for the first out.

Van Horn said he put Bates into the game to get another left handed hitter against Rocker, and it works out well as he grounds a single through the right side. Franklin scores and Moore moves to second. The Hogs cut the Commodore lead to 2-1.

Battles with a swinging bunt back to Rocker. Both runners advance 90 feet as Rocker throws out Battles at first.

Gregory works the count full and then takes a ball in the dirt to load the bases.

Scott Brown, the Vanderbilt pitching coach is going out to talk to Rocker as Goodheart steps up to the plate.

Rocker bounces a 95 mph fastball off the helmet of Goodheart and this game is tied.

Wallace grounds out to third to end the inning. The Hogs score two runs on two hits.

Wicklander strikes out the leadoff batter with a nasty breaking ball.

He walks the next batter of five pitches, but he gets out of the inning with a 4-6-3 double play.

Rocker strikes out the side in the first.

Goodheart strikes out looking to start the inning.

Wallace and Smith strike out swinging. Rocker looks to be on early in this game. He's throwing all of his pitches and locating them pretty well.

Bradley starts things off with a single to center.

Bates makes a running catch in right for the first out.

Keegan singles to right and Vandy has runners on first and second.

Bradley tries to steal third, but Opitz guns him down. Bradfield is now 42-48 on stolen base attempts.

A pop fly to center drops because Moore and Franklin couldn't see the ball in the sky. The runners advance to second and third.

Rodriguez doubles down the left field line and both runs score. Vandy leads 2-0.

LaNeve grounds out to second to end the inning.

Arkansas will start Wallace at third, Smith at first and Ethan Bates in right field.

Neither team can be eliminated Thursday. The winner will advance to the semifinals of the tournament and will not play again until Saturday. The loser will play Ole Miss in an elimination game Friday. Ole Miss eliminated Georgia with a 4-0 win Thursday afternoon.

Arkansas was No. 1 nationally for 10 weeks and Vanderbilt was ranked No. 1 for three weeks during the regular season.

Arkansas is the No. 1 seed at the SEC Tournament following its regular-season championship. The Razorbacks have never won the tournament title.

Vanderbilt is the No. 4 seed at the tournament after the Commodores finished one-half game behind Tennessee in the SEC East.

The Razorbacks will be without first baseman Brady Slavens on Thursday after Slavens sprained his ankle during the game against Georgia. Slavens, who leads the SEC with 61 RBI, is expected to miss 1 to 3 weeks.